I have actually done some things actually

1. Tried and failed to get L’s passport renewed

This meant a futile day trip to London, which, although a total failure as far as its intended outcome went, was not wholly futile for the following reasons:

- Lunch at Roti King with M

- Purchase of books (Plot 29, The Outrun, at last after 700 insistent recommendations) 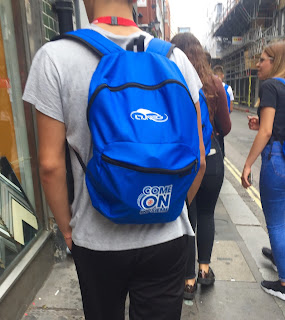 On trip 1 I walked all the way from Montparnasse to Bastille, stopping off to stare into cake shops, take pictures of Saint Sulpice for my friend F and Parisian dogs and Garde Républicaine horses for myself 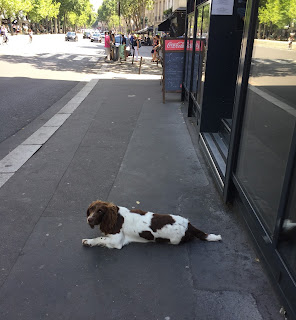 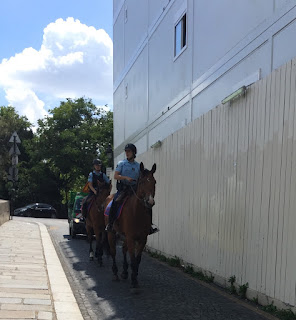 On trip 2 I had at least one child with me the whole time, but forced child #1 to Boulangerie Utopie (“this is pointless”) for amazing curried sesame baguette (YES AND SOME FLAN WHAT OF IT), then forced child #2 down into the Catacombes (“how long will this take”). He was actually fine with it once we got there and we had a jolly time, trying to speed past a very pompous tour guide intent on explaining The Middle Ages and Death to a large group of people who just wanted to take skull selfies. 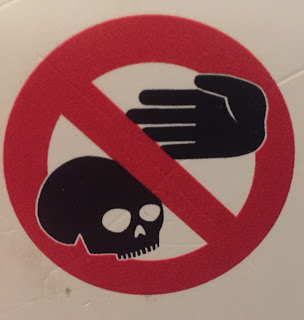 Trip 3, final, is this Friday. Trying to see the Hockney at the Pompidou, avec ou sans enfant, plus a scavenger hunt through whichever bakeries haven't closed for the summer.

3. Went to an exhibition

Bastarding Hokusai at the British Museum was full, after being CLOSED on my previous trip to London (I am furious about this), so not that. But I did go and see Fabulous Failures in Brussels and it was weird and quite cheering. Recommended.


4. Received the following PR emailed offers I will not be taking up

- Jeans you can sleep in
- Follow in U2’s footsteps
- Discover your inner goddess (nope, we all know she's this one)
- Take your pet on a luxury spa break (I could be tempted if I could take a tortoise)
- Swim across Windemere

Spent the day chasing around after multiply explosive upset stomach dog with kitchen roll, bleach, Marigolds and gritted teeth. Then in the evening he got worse, so I had to carry him down to the vet. He has stayed there overnight but she said she’d call if it was anything terrible, so it looks like it will prove to be a ruinously expensive bug/something gross eaten off the street. Knowing how unhappy Ouipette looks at the best of times, you can imagine the unspeakable misery of it all. 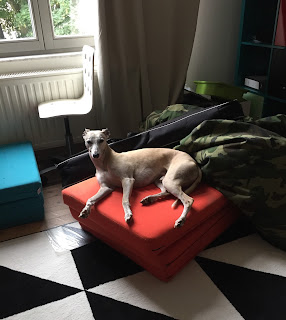 This was taken just after he came up 4 stories specifically to be sick on my office floor, then left again. He got even sadder as the day went on, poor Ouipettte

I have updated the reading page for June. Generally good! Many highlights!

7. I can't believe I forgot this one

I was on the radio! A man from the BBC called when we were on holiday in Spain and asked if I could be amusing about boring holidays for a minute or so. Apparently I passed that test, because they recorded me talking about boring holidays from our boiling hot Spanish cupboard, between the many chimes of the many church bells. I haven't dared listen myself, but if you are so inclined, it's towards the end of this hour, I believe. My dad managed to find it and declared himself "deeply hurt" by his characterisation. I didn't even tell them about the time he locked me and my brother in an outhouse in the Dales without our shoes and with only a decomposed bullwhip and some mildewed Encyclopaedia Britannicas for entertainment because we were annoying him so much.
Posted by Waffle at 10:31

I listened to you while the programme was first broadcast, so was pleasantly surprised to hear Paddy introduce you. You sound like I thought you would.
I'd definitely go on holiday with one of my pets.

Omg! You were great on the Radio! Hilarious!
Your dad should relax.

You should listen to it, if only to hear the holier-than-thou lady/uber-mother who followed you with the express aim of making you look bad!!

PS you are on at the 24:10 minute mark actually. If you wish to avoid freaking out at what you actually sound like, then tune in at 28:05 for supermum.

We made it to the Hokuysai exhibition for a school project - it was interesting, if only to discover that the Great Wave is kind of famous because there is no "original" - just a LOT of copies of it. It was kind of the Athena tennis-player bum picture of it's day, it turns out. We also got the Hokusai colouring book, which the school duly photocopied as soon as they saw it...

Please DO listen to that awful woman on the radio after you! She sounds a million years old and, quite frankly, as dumb as a box of rocks. Well, at the very least, she has NO sense of humor. I think you sound amazing on the radio and need to have your own program!

That was such a long day for you but I think you enjoyed it.
Thanks for always sharing your stories.

Take every chance you get in life, because some things only happen once
cara menyembuhkan divertikulitis pada anak dan dewasa secara alami

In the event that you set up any insurance, the bank has the privilege to take that advantage and exchange it, Cash Advances San diego