The consolations of poultry

Did almost nothing at weekend and spent it torn between basic animal enjoyment of idleness and MAD WITH BOREDOM. Got into a strop yesterday about how bored I was but of course I really had no one to blame but myself, which was even more enraging.

I sometimes forget that living here means I have to actually get organised if I don't want to die of boredom on Sundays, that or become a poet of the dusty, gentle, ice cream eating, dog walking repetitive madness of suburban Brussels (nope). This was never a problem in Spital Square (where just going out of the front door brought prostitutes, fighting, the upmarket, Gilbert & George) or Newman Street (the gaudy promise of the east end of Oxford Street, the hare krishnas, or the actual fecking British Museum if you were feeling classier). But, you know, there is the consolation of chickens here I suppose.

Went to Midi market on Sunday morning and became fixated on a pair of boxer shorts that were black with FUCK OFF written on them in huge orange fluo letters. Such angry pants! I couldn't help but feel they were speaking to me. What are you saying exactly when you wear them? I mean, yes, you're saying FUCK OFF but what else? Are you enjoying secretly knowing your genitals are telling your boss/fellow commuters/family to fuck off? (Yes) (Obviously). I want some.

On Sunday afternoon after an abortive attempt to go to the cinema (thwarted by a series of diversions cunningly installed by the STIB in many unexpected places), we went around the local brocante, though this is a far too classy word for people just dumping shit out of their houses onto a tarpaulin and asking a punchy €5 for it. We played our usual "find the worst item" game, but since I spotted a hank of what appeared to be human hair (blonde, very dry) in the first two minutes, it became somewhat pointless. There is a new sinkhole in the brocante hosting street and a madwoman tried to engage us in conversation about it, the gist of which was that it wouldn't have happened in Ancient Rome.

Is anyone else watching that Life Swap thing on BBC2? I am very much enjoying it. It is not at all like Wife Swap because all the people on it so far have been thoughtful, open and interesting and not attention hungry maniacs who want to fight about everything in sweaty incoherence. I don't have anything clever to say about it, I am just enjoying (esp the guy from Guyana who said that a British sandwich was "like an old dead fish").

Woken at 5:30 by dog coming into bedroom, which is his new neurosis: he comes in early in the morning and either stands next to the bed staring at me whilst licking his lips or clicks round and round in scrabbly pawed anxiety until one of us cracks and gets up to shout at him. There is a third option which is shut bedroom door, but then he leans against it, scrabbles, and cries. Husband thinks it is because he has developed a fear of the bin lorry, but it's not as if he only does it on bin days. He does it EVERY day, possibly because the bin lorry might be coming. I might need to do some kind of bin lorry flooding therapy with him to get past this eg. spend the day at the local dump which could well be considerably more productive than a normal day for me, on current performance.

Actually, he has been strange all day, sitting under or next to my chair, staring at me and trembling, which is very distracting when you are trying to scratch your infected mosquito bites and read the entire internet. I just went to empty the washing machine and he followed me, then hid behind a sheet and stared out at me, just two mournful eyes and nose visible. Now he's back, standing and/or staring. 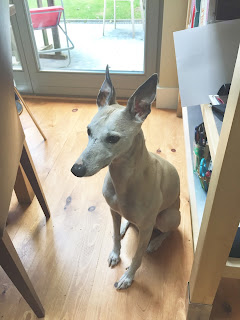 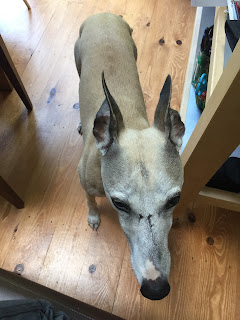 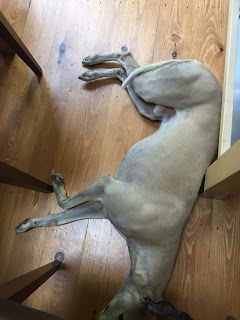 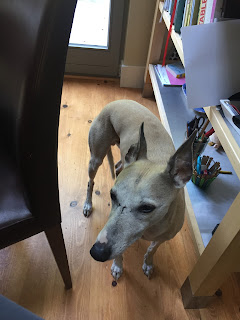 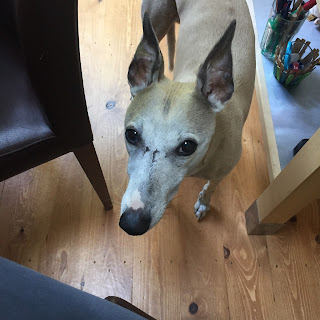 1. Someone is stuck in the abandoned mine shaft and I have failed to understand;
2. The beginning of the end, though he is only nine and whippets are supposed to live for ever;
3. A Phase.

If whatever it is continues he's going to need one of those glade pet prozac plug ins they advertise on telly. I have long wondered if they work on people too, perhaps I will finally get the chance to find out?

Well, I was very confused about your Sunday as when I first read it I thought there was a sale of actual feces. And I thought, "How very odd! No wonder she had such an awful weekend because who really buys that. And isn't it kinda smelly." It wasn't until I read "useless item" and then re-read the preceding sentence that I had my light bulb moment and realized you meant useless junk not...you know.
I'm now having self-induced panic about party I'm hosting this weekend. Self-induced as there was no real reason to have this party--other than Canada's 150th birthday--so I could've saved myself some stress.

I am new to the whole dog thing and trying, as detailed in the manual, to socialise a puppy. Number 62 on the list is the bin lorry. We did not like it at all. No clue as to what to do about it. Or the chewed up books, nipped children and frayed power cables. It's all more complicated than I was expecting.

Broke up many deck tiles, replacing them with meter square ones all running in the same direction, and no lockjaw (much to everyone's dismay), so I'm fine, I guess. They were the cheap cheap option, as opposed to the more expensive cheap option, whose proportions seemed clunky to me. When it rains, and it does, they turn the color of the bedframe in Slaapkamer te Arles, the first version of which was painted the year this place was built.

Have you tried pitching an article where you take your dog to a therapist?

I want a ton of those fuck off boxers, and something to shoot them out of. Never mind why, but if you're feeling the same consider the following (go ahead, times have changed, we're all considering things we thought we'd never consider)--

"Do you sell Air Cannons outside of the United States?

Yes. We have sold to more than 25 different countries around the world; including Australia, Brazil, Belgium, Canada, Dominican Republic, England, France, Japan, and Mexico to mention a few. The only additional cost you’ll incur to purchase an Air Cannon internationally is an extra shipping charge."

I have nothing clever to say, except I can't seem to find your book on the amazon US site. I am very much enjoying your blog posts!! I have 5 chickens and they are so fun to watch (they can also be a pain in the ass) like when my australorp went broody and stopped laying, puffed herself up and looked like a psycho devil. Put her in the broody cage and now she's her sweet self again. Nothing like dining Al Fresco on the deck with dinner guests and an evil chicken caged a couple feet away.
Anyway, any tips on where to get your books in the US?

Carla, when I went onto the Amazon US site, it shows the book available from other sellers through Amazon. One of them is Book Depository, and I've gotten Amazon orders through them before and they are great. Happy reading!

Carla - How can you say you have nothing clever to say when your image of baleful chicken in a box spoiling your al fresco dinner has delighted me so??? I am sorry, book didn't get a publisher in the states, though Murphy's suggestion sounds promising? Also, thank you for even trying.

Murphy Thanks for the tip! I will investigate a little deeper for the book.
Waffle I think it is time for some goats;) I am seriously considering them myself. "They" say that chickens are the gateway farm animal.....

Could ouipette be mourning the departure of kids? He might be afraid they're not coming back EVER. Separation anxiety in development?

Interesting article! Thank you for sharing them! I hope you will continue to have similar posts to share with everyone!

The consolations of poultry. Did almost nothing at weekend and spent it torn between basic animal enjoyment of idleness and MAD WITH ...

I really appreciate this wonderful post that you have provided for us. I assure this would be beneficial for most of the people.
- five nights at freddy's
- lenny face

Once in a while my dog is clingy, usually it turns out he doesn't feel good and there is an undiscovered pile of stomach contents somewhere. The anxiety can usually be treated with a 30-45 minute walk. Good luck

I'm very much for shopping an article on taking your dog to a pet therapist. I have only heard one such story, and found it hilarious (in an aren't we overly sensitive & privileged way, I guess?) and am guessing others would be similarly amused, but the advice was also successful!

While payday credits and loans offer sums going from $100-$1,000, car title advances give the customer the alternative to acquire as much as $5,000 to $10,000. That is a lot of cash when you just have one to three months to pay it back. Purchasers be careful: when contemplating going out on a limb vehicle title credit, consider these money related entanglements previously you make all necessary endorsements. auto title loans chicago