Leave the Important Items With Me

My mum often used to have terrible birthdays/Mother’s Days when I was young, because Prog Rock, although a saint in almost all ways, doesn’t really have much truck with end stage capitalism, and because I was a sulky teenage git and my sister was too young to do anything, and it would often end with my mother in a whirling, weeping fury as we ate a rubbish pub lunch somewhere, in silence. When I found myself sitting crying angrily on a pile of laundry on the basement floor on Sunday, I couldn’t help but think of all her disappointing festivities and how nice it would have been to call her up and tell her about it and laugh about it and insult family members and I could also apologise for our former shitness. So then I cried some more.

ANYWAY. We did - some subset of us which may or may not have included the router - have an excellent pizza and I insisted on having a spritz despite being hungover and a pudding despite … actually despite nothing, I’m allowed a fucking pudding. 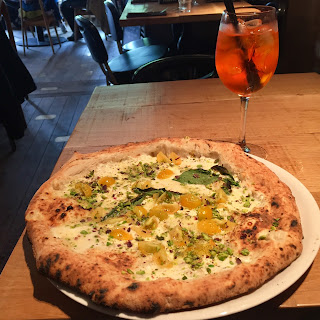 F’s Chinese textbook - do you remember the poems? The sad ones about the beans boiling to death, etc? Well it’s a different textbook, but equally quidsworth - has been entertaining us recently.

Observe the chapter headings and the weird, disturbing picture they create: 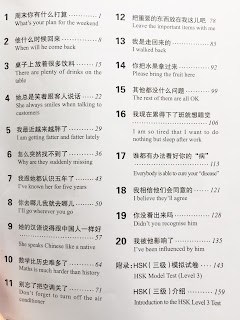 If you can't read them (clicking on it might help) here are a selection of my favourites. 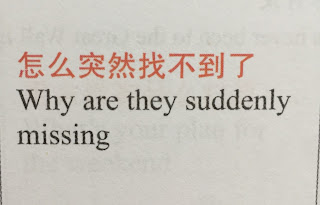 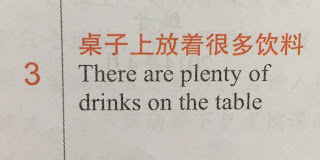 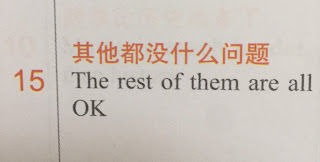 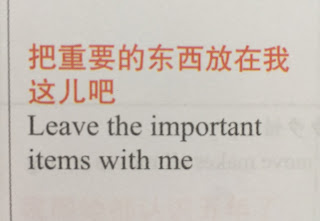 This one seems to come from another story entirely, but I also want to read it:

Pourquoi il n'a pas de zoreilles?
(why he got no earses?)

The ears thing is an oddity. He does fold his ears very aerodynamically to walk. I tried to take a pic this morning, but obvs he was not keen to cooperate, so this is a sort of half fold, because I had stopped to try and take the picture, thus obviating the need for ear foldage (sigh). 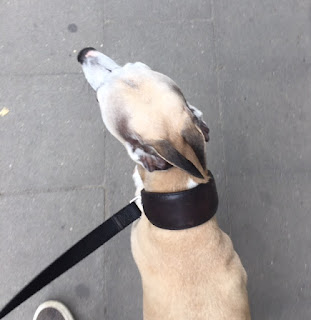 Ouipette is having a bad run of things. He got attacked by an elderly Lassie outside Carrefour yesterday, pulled a muscle trying to run away from The Crazy Cartoonishly Shaggy Dog In The Park and also Hillary has taken to chasing him round the back yard.

Massive pig high jinks, bloody shit in a test tube, Peter shows unexpected mastery over a horse, lamb with a second head sized growth almost carks it but pulls through, Peter fixes a terrier's leg with many wires and without ANY of the histrionics Noel "Supervet" Fitzpatrick would have brought to the task ("No one else could do this, this is the hardest job I have EVER done, I am SO EXHAUSTED", etcetcetcetc). More and more Peter is my hero, with his gleeful, pink faced jollity at everything, from flapjack to puppies to the warmth afforded by sticking your hand up a cow's arse on a winter morning.

An 18-year-old boy who works in our local is terrified of my little, fawn-coloured whippet, saying that he 'looks as though he's inside-out'. Cheeky sod.

100% veering beween mild fretting to total freakout over leaving beloved husband and dog tomorrow for two months in Spain for work on a project I've never done before. However, it's going to be great once I am there, because Spain.
p.s. I loved your book. I cried on Mother's Day, too, because I can no longer tell my own mother how much I miss her and appreciate her and for sure how much I regret being a total shit at times in my youth. But she knew that already, and so did your mom.

70% zombification as an allergic reaction to tree pollen that is all pervasive.
10% fed up of the total hash the wind makes of my hair every time I set foot outside.
50% roast brisket on ciabatta roll sandwich sitting beside my keyboard.

My favourite yorkshire vet moment this series has been when Brian the cute hamster was anaesthetised, had to rewind and watch several times and it never lost its hilarity. I agree about Peter, i think I love him though also love Julian but in a slightly more lustful way.

I won't bore you with the details but managed to eat feta cheese yesterday and am not ill, which is a miracle as have had to be on an extremely limited diet for a long time and it was bloody gorgeous. Plus ate a ginger biscuit last week. Its the little things in life ...........

I know he's a git but I love ouipette

Have a good day, Lynn x

Caught a heron downing a rat, on film. Not the grossest thing you'll see in the provinces, that would be some fuckwit tearing by with a huge wake that washed over the grebe nest. Kept hoping they weren't rebuilding and sitting on it all afternoon out of sheer denial.

Seems like there was something else...oh yeah, I hate everyone.

My favourite Yorkshire Vet moment was when the llama got to go back to his paddock having been inside for weeks. I had no idea they went 'boing'!
Been worried about the lamb with the large cyst on it's head all week. Hope it's OK

Oh -- llama boinging! I wish I'd seen it.
I am regretting my uninformed decision to pay LARGE MONEY for my 11 year old car to be resurrected at the repair shop. I have to hope that it will totter onwards for another couple of years in order to possibly get enough use out of it to justify the cost.
My hollyhock (that I accidentally mowed down last summer) is growing tall next to our front steps. It is about to bloom and I am unreasonably proud of it.

I've utterly given up on Mother's Day. It's a shit day all around, both for children and mothers. If only it would become universally illegal to announce "Happy Mother's Day!" on all social media platforms.

The Chinese headings are poorly translated and don't sound quite so odd in the original. 'Drinks' shoould be translated 'soft drinks' for example. And the word 'bing' doesn't just mean disease but any fault/problem. These chapters sound a lot more engaging than my dull Eastern Bloc inspired Mandarin primer of the 80s in which Palanka inquired about cloisonné at the Friendship Store.

I enjoyed over read your blog post. Your blog have nice information, I got good ideas from this amazing blog. I am always searching like this type blog post. I hope I will see again
jogos friv 2
juegos kizi 8
juegos yepi 2
friv 5
friv6
juegos y8
juegos 5

Things, for example, APR, setup expenses, the measure of the advance and your installment timetable ought to have all been obviously laid out to you. Payday Loans

The intrigue endless supply of the credit is frequently higher than with a customary advance, so these advance administrations should just be utilized as a part of instance of crisis.
Cash Advance Chicago

Thanks for sharing. I hope it will be helpful for too many people that are searching for this topic. Don’t forget to watch ISL live streaming online.

Personally i think really wonderful to have observed your site web page and think about such limitless the in addition enthralling conditions evaluating here. Much reviving again for each and every one one of the motivations behind interest.
happy journey wishes messages
1st wedding anniversary party ideas
birthday party ideas for grandma
new punjabi movies
new tamil movies
new malayalam movies

Payday advances are a transient loan, when it is required the most...usually between paydays! Payday credits are an awesome method to get some money to hold you over to your next paycheck. Payday Loans Costa-mesa