I do some stuff Pt II

Here are some lovely Manneken outfits I discovered at the new Mannekmuseum (that is not its name). 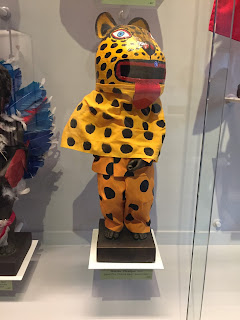 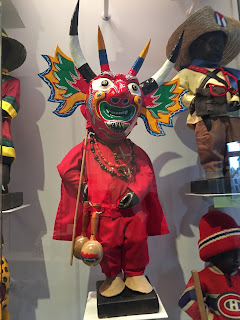 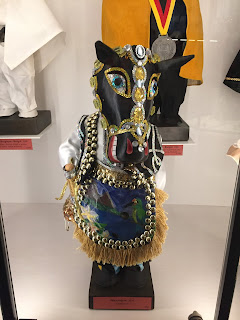 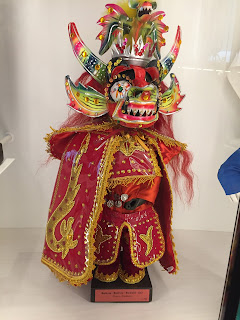 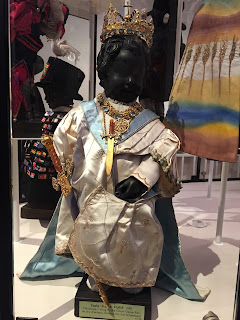 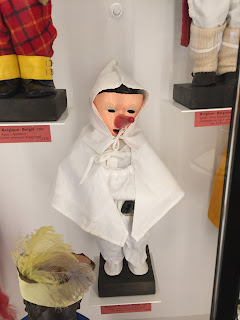 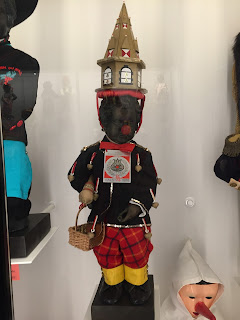 Excuse me, you have a church on your head 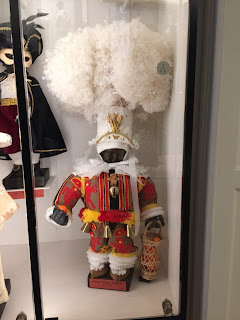 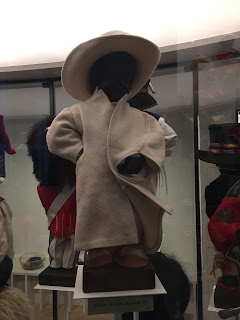 And Ireland? Really? Is this the best you can do? 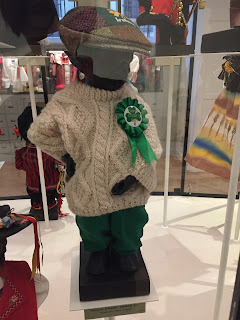 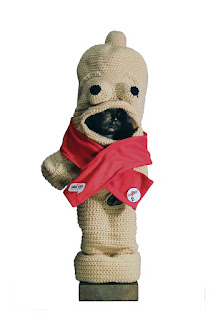 The need to protest is sadly undiminished so we went again this weekend. I got L on banner making duty: 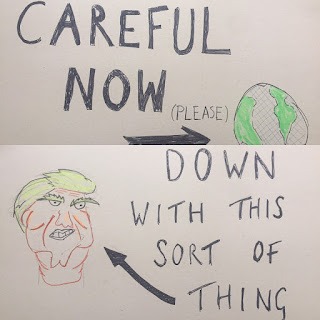 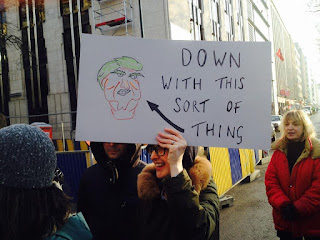 My friend P's banner was excellent: 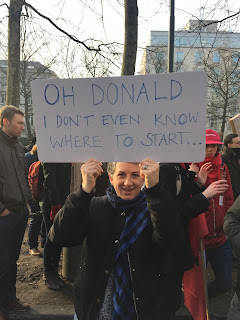 But I think these guys stole my heart: 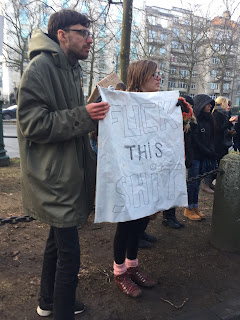 Dutch
I have started my new advanced Dutch class. Almost in the class is better than me and one girl is so good I don't even understand why she's taking lessons. Obviously, this is making me absolutely furious and determined to keep up. We have been talking about child rearing (opvoeding) for two weeks and there is one really dark, funny woman who keeps telling us how awful her children are in broken Dutch. I want her to be my friend.

Baking
Even though it was terrifying, I made chocolate chip brioches with my 10 kilos of chocolate chips (not all of them, that would be silly) at the weekend. The dough was a thing of utter terror and would not rise or do anything a dough should, nevertheless, it did somehow become brioche, eventually. I have bought fresh yeast and watched Richard Bertinet do dough magic and I am ready to try again this weekend with a better recipe, because apparently I need to get even fatter. 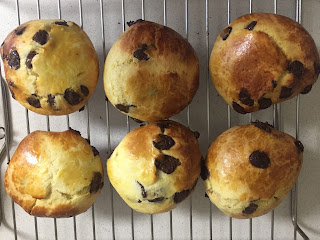 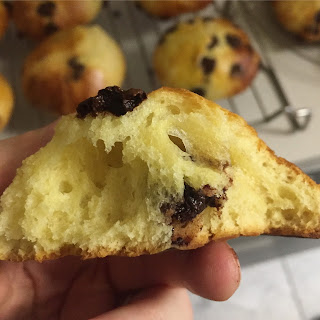 I don't think I have anything else to relate, except that I accidentally drank a Korean alcopop on Saturday night and am still regretting it. I really will update the reading page soon, that is a (craven, empty) promise.

Did you read Zoe Williams on dogs? It really made me laugh. I bet the comments are a fright.

Best sign I have seen:
"2/3 of Trump's wives are immigrants - proving once again that we need immigrants to jobs most Americans WOULDN'T DO"

Manneken Paradise, something for everyone, but the Pinoccio/KKK outfit…. truly terrifying. I particularly liked the Yeoman/ large overweight poodle on head mannequin (and is it really holding a basket of oranges?) The crocheted condom was quite inspiring, as I am a manic crocheter, always on the lookout for novel ideas. Love the look of your brioche and may be brave enough to attempt some (hahaha, who am I kidding)

I love the cartoon of Donald Trump on your banner :) p.s. have next few days off work, so will TRY to finish your book. I wonder if there is a collective noun for a number of half-finished books ?

Everything about those Binche characters is terrifying, even when reproduced in Manneken size. But the bands and the sausages are excellent. Thinking about Binche made me look up Mardi Gras -- it's on 2/28 so I haven't missed it this year! (I *will* miss it because I don't stay up late carousing on Tuesdays.)

My numbers are currently:
20% Still oppressed by the last stage of my head cold. I wish to retire to the sanitarium for a few weeks.
40% Fond of US lawyers and the judiciary who are Doing Their Jobs!!!
10% Enjoying a novel, All the Birds in the Sky.
25% Uncertain whether our new family chore system takes more effort from me to nag others than it would to do the chores myself.
5% Looking forward to buying Valentine's Day chocolate on sale.

No snow so I am peeved and petulant and feel cheated. Thick ice on lakes though so skating a bit. It will have to do as substitute for crosscountry skiing (LOVE).

Have deleted Facebook app from my IPhone for the zillionth time. Drawn to it, can't stop myself from trying to talk sense into people. HAHA. Or maybe I just tell them how utterly unprincipled and ridiculous they are. Who knows. People from left to far right are angry with me so I guess all is good after all. Tomorrow I will probably install the app again.

25% Don't understand why someone in your household cannot customize a helmet for you so that it looks like part of a leopard Manneken costume, and I don't know how you can defend even trying to fit in if they don't.
35% Finding Carrie Mathison's constantly agitated face surprisingly calming.
10% Slightly freaked out by one of my occasional google searches for people from my past. Have found a meth bust, and a pulitzer prize before, but this week a rape and strangulation cold case that I can't even mention to anyone, because people I know live near the park (in Berkeley!) where this happened, and women have the right to enjoy their parks.
5% Recently guessed a French bulldog was called such as it has a nose somewhat reminiscent of a fleur-de-lis. Though any breed with Weimar in the name may be right on the verge of huge popularity.
5% Thinking about a Plutarch-Parallel-Lives-themed take on rump and the guy next door.
10% Distracted by 2017 calendar one of my sisters sent of a local high school surfing team. She thought it was funny, but checking the tides is kind of soothing.
8% Sending the grocery boy off with, "We're still alive!," yesterday probably goes against my almost daily resolution to tone it down a bit; but until further notice, I'm feeling BAD (and responsible) for young people.
2% Simone de Beauvoir claimed that letting kids behave as badly as they want, makes them more amenable to conforming later on. This seems counterintuitive, but I bow before her knowledge, and have seen some proof (fairly certain she was not condoning this).

Oh yes, the dog days of February:-) Thanks for posting the Trump signs.

the Manneken is truly the imelda marcos of ludicrous costumes... is his dresser's official outfit also notable?

You're still very funny...let's take 'the very dark lady' out for wine and karaoke!

Condom costumes :)) I want to see all the costume in Mannekenmuseum :))
png download

Hi,
Thanks for the information about this Really nice Post.

In the event that the cash for an installment isn't in your record, then you can add overdraft charges to the current cost of a payday credit.

Have the store promoting methods stomped your planned costs leaving here and now money alternatives like auto tile advances or loans your best way to remain alive? The finish of the year brings the ads and promoting techniques into full swing. It's a plenty of offer strategies prepared to bomb your financial plan. How goodness how might you survive the fight?

Another way, payday advance organizations confirm a borrower's character is through business check. The potential borrower is required to round out an application, expressing their place of business and the telephone number of their manager.

There are heaps of reasons that individuals need to get their hands on crisis money quick and not letting everybody realizes that you can get your hands on this money rapidly and effectively.

Really i appreciate the effort you made to share the knowledge. The topic here i found was really effective to the topic which i was researching for a long time.

Are you looking to cash into a checking account, the total amount usually cannot be immediately accessed; there may be a waiting period for the check to clear? We are the companyproviding you the best services about check cashingwithin a short period. In USA you may find us everywhere, every city and 24/7. We really love to serve you the best things with 100% satisfactions. It is really hard to say when exactly need to cash your check. Sometimes it may very difficult to cash if it is not official hours. That’s why we feel you much and started 24 hour check cashingservices. It is very easy to finding us as we are at your city or nearest places. Just remember us and we will cash your check very short period with a very low cost.

We can money every kind of checks. want your money checked? we will serve you what you're wanting like check cashing close to American state it's very easy to seek out U.S.A. at your nearest places.
check cashing Bridgeport

I am such a huge fan of the Percy Jackson books and unlike most people I really liked the films and am waiting for the Percy Jackson 3 to be made. It’s sad that Logan Lerman won't be able to return because obviously he's a grown man now. But I'm looking forward to a TV show too. After all this is the golden age of television and hope you’d do a good job with the material at hand.

Be that as it may, in view of the current financial emergency the nation is enduring, banks and charge card organizations have not been accessible to them.car title loans online chicago