So I have been forty two for a while now. The big stuff is as ever: I have nothing you could realistically call a career and not a whisper of a pension, except whatever it is I pay €360 a quarter to some emanation of the Belgian state for (unknown, but it says "pension" on it, I can't see this translating into regular aperitifs with a small dog on my lap in the bar of my choice in 30 years, but I live in hope).

I had a book published which in some secret part of my soul I thought would change my life, but it did not do so in any way other than to make me even more grateful for my kind friends who bought it and reassured me it wasn't totally shit and pointless. Also, it didn't change my life for the worse which might have been the case, so I'm basically ok with it all.

I have played some role in ensuring my children are still alive and in possession of a full complement of limbs, though apparently not the ability to leave their socks anywhere other than on the table. Hillary the Hen has escaped from every prison I have devised for her and the dog still hates me. Bilan mitigé, as they say in French.

What, then, of the small stuff?

I think I now have a “signature style”, of sorts. Basically, it involves dressing like a 40+ heterosexual man. Shirt, usually. Jumper, always (today I received my newest purchase which is an actual man's jumper, black, fine gauge cashmere and it is the plainest, most perfect thing in the world). Jeans/plain comfortable trousers. Trainers/flat shoes. The end. I also have a 40+ heterosexual man’s grooming regime, ie. no grooming whatsoever, beyond basic hygiene necessities. My skin looks exactly the same as it did when caressed lovingly with snake oil unguents 2 x daily. I don’t really know what to think of this.

Also (this cannot be included under "style") I own a high performance, expensive waterproof garment and wear it with pride in appropriate circumstances, which are numerous in Belgium.

Exception to grooming, above: I also have a "signature scent": Frédéric Malle Portrait of Lady (crème de corps, not actual scent) in winter, Terre d'Hermès Eau Très Fraîche in summer.

I indulge in regular non-disastrous baking, including with yeast. For instance, I made salted caramel brownies yesterday. God knows why, I have an exam on Thursday and a limited grasp of how to use passive sentence forms in Dutch, there were clearly better things I could have been doing. The recipe was stupid but they tasted ok. You can’t really go wrong with that much fat and sugar.

I always have the following in the house: scissors (5 pairs, 3 large, 2 small), envelopes of three different sizes, a selection of greetings cards, both European and Belgian stamps (my stamp profligacy is legendary), packets of tissues, dog shit bags, nail clippers.

I know where all the important paperwork (passports, birth certificates, health insurance docs) is and I’m not telling anyone else in case they move it.

I go to the dentist regularly (only because of a recurrent stain on one of my front teeth that needs to be removed at least once a year to avoid descent into Shane McGowan territory, but nevertheless, I'm adding it to the positives list).

Haven't lost a mobile phone for 2.5 years and a wallet for 4.

Learnt how to darn properly.

Have not applied darning skills to any of my mothbastard eaten jumpers since learning, instead preferring to just put them in the freezer and hope for the best, removing as required to wear,  avec holes.

There is something in a small dish covered with silver foil in the door of our fridge that has been there for, ooh, at least six months and I am too scared to look inside. I will probably end up just throwing the dish out without taking the tinfoil off.

This post-it note has been on the landing for months: 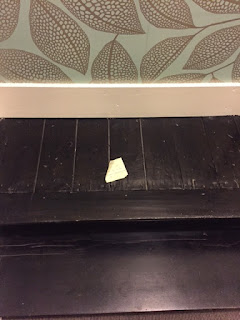 (isn't that wallpaper good though. It wasn't even very dear) 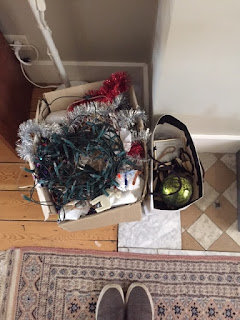 These are the Christmas decorations in the corner of the sitting room and I have lost the will to do anything about them. Whatever. *limp shrug*

House still smells of fish, from the time I accidentally melted a fish oil capsule on our toaster approx a month ago.

I would still far rather my life partner intuit my needs and desires from tiny body language cues, passive aggression and talking to him inside my head rather than actually expressing said needs/desires out loud. Obviously.

3 years late getting a mammogram.

Repeatedly overdrawn. Only consult online banking in extremis. All non-interesting post still sits in pile at bottom of attic stairs until I get angry or anxious and hide it in my desk drawer.

Signed up for some kind of stupid heating insurance thing last month because the woman kept calling and I couldn't work out how to say no.

Still using the same towels that were pensioned out of my dad’s holiday cottage business as too worn in 1997.

Found out I was paying for a safe deposit box (don’t ask) unused since 2008 last week.


How are you doing, adulthood-wise? What do you consider your greatest adulting achievements and failures?
Posted by Waffle at 15:06 51 comments:

Happy New Year! The world is a roiling pit of terror and awfulness. However, here are a few things that are ok over here. I very much hope you have some too.

1. I have a new salad spinner after years of fighting with a really shit, broken one and it is a thing of wonder. You pull a string and it’s a total sensual pleasure, what, shut up, that is a fully legitimate source of pleasure and anyone who says otherwise is kink-shaming.

2. My children also purchased some new kitchen scales for me for Christmas (no, they did not come up with that on their own) and there is great joy to be found is scales that:

(i) do not switch themselves off arbitrarily when you are halfway through measuring something
(ii) have a non cracked bowl (actually, they don't have a bowl at all, that is the modern way, apparently)
(ii) have not been used to weigh tortoises (everyone is still hibernating in the fridge, bodyweight loss is stable at an acceptable 2%, so I am not getting my crisper back anytime soon).

3. The degree of gratification I experienced when our Alpine Air BnB lady wrote “appartement laissé en très bon état” is… well, quite honestly it’s a little disturbing, but I’ll own it.

4. We all got on relatively well in a tiny confined space in a snow-bereft ski resort over New Year with no feasting on spinal fluid, which is little short of a miracle. Although I feel bad for the people who like skiing, I myself, as a ski refusenik, was perfectly content with walks in the mountains (we saw chamois! And put up a black grouse! According to the mountain guide, a genial man who did not stop talking for five solid hours, god help us all, if that happens twice in really cold weather, the black grouse DIES, because it no longer has the energy to fly and just gives up and expires #teamblackgrouse), reading, goggling at the profusion of terrifying fur garments, testing various types of tarte aux myrtilles, etc. Here is my elder son totally enjoying that five hour hike for which he was not bribed with the offer of actual money, no that definitely did not happen. 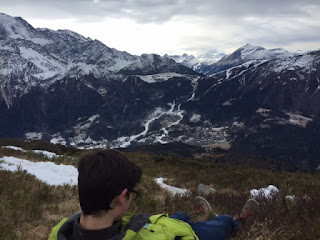 This walk was organised by, I dunno, the Megève tourist board or something and there was only one other participant: A FOURTEEN YEAR OLD BOY. ON HIS OWN. I keep trying to imagine my children volunteering for a five hour hike with strangers, participating cheerfully whilst asking questions on local flora and fauna, then choking on my own tongue laughing.

5. My sister gave me the perfect woolly hat (large, soft, plain, colour “bramble”) for Christmas and it fills me with love and makes my head cosy without giving me the full Benny from Crossroads vibe.

6. Brussels, in its wisdom, has given us a fourth colour of rubbish bag which we are instructed to fill with a mystifying selection of household waste. As a person wholly committed to slavishly following arbitrary instructions to the very letter, my new orange bag is filling me with joy. Who knew, before the orange bag, how much kitchen roll we use? No one. And now I do. And no one else wants to hear about it, but never mind. (So much. So much kitchen roll)

7. No Offence is so great. I hadn't realised it was back and am thrilled.

8. I have totally mastered making proper, fluffy, delicious cinnamon rolls, even though the dough (Felicity Cloake) is a right sticky, ornery bastard and terrifies me. My freezer is now full of cinnamon rolls, individually shrouded in blue bags. When I get anxious and have no recycling to sort obsessively, I can open the freezer and count cinnamon rolls. I am flooded with calm and satisfaction. It is good. Here are my cinnamon rolls pre-freezing: 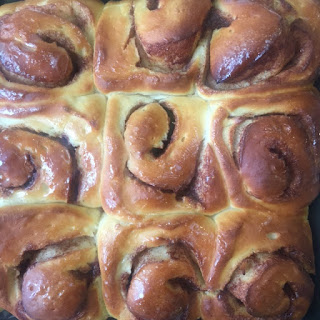 (ndlr: no one else in this house likes cinnamon rolls, they are mine all mine)

9. Having been hideously sick over New Year (réveillon meal: 1 stick of chewing gum, 1 cup of tea, half a plain yoghurt) and thus missing out on four days of good eating and drinking, I feel fully justified in eating cinnamon rolls whenever the mood takes me.

10. Belgium is its usual insane self, as poorly represented by this random selection of pictures I have taken recently: 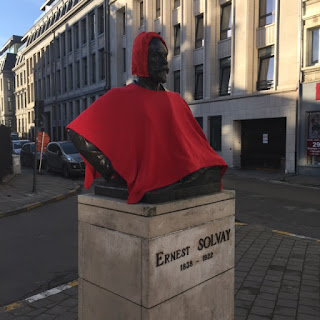 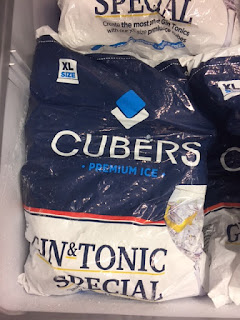 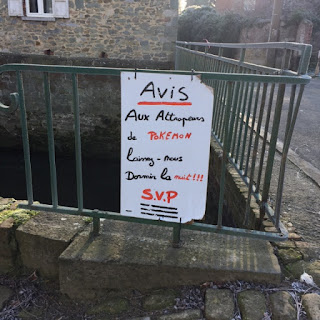 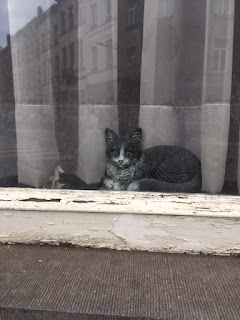 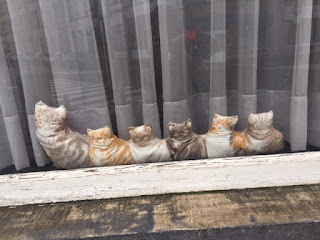 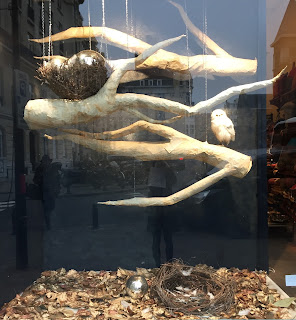 (I also have a picture of a man on my tram talking on the phone to someone listed in his phone as "Pigeon", but sadly "Pigeon" was illegible in my stealth pic)

My New Year's resolution is to engage more deeply with Belgian culture. Let's see what that brings.

You? What tiny bright spots are softening the rat apocalpyse for you?

(PS - What can I do about all the fucking witch doctor spam comments? Z is being driven mad by them, but I can't see any option to allow anonymous comments yet still banish witch doctor testimonials. Help!)
Posted by Waffle at 16:29 36 comments: