I will attempt a write up of the wonderful Books That Built Me shenanigans last night soon, but in the meantime I needed to share two things which have amused me.

Flocon the cat
The first is that L's external French exam has become the subject of great controversy in the Kingdom of Belgiana. A reminder that he is 14. One of the questions involved reading a short text about a cat, Flocon, which was described as "black with a white mark on its neck", then the students had to study 4 photographs of cats and say which one was the cat described. This was not a trick question. You genuinely just had to find the picture of the black cat. 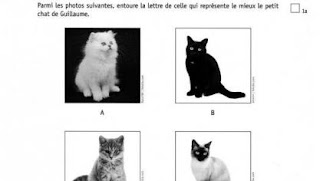 (this is the only photo of it I can find, the candidates had a fuller view of the cats but you get the idea)

The French teachers of the Kingdom are up in arms, for understandable reasons, some were reported as having "cried" whilst marking. The minister has defended the exam, basically by saying "there were other questions". L's exams are now finished and I am not sure which of us is more relieved. I no longer need a secret cache of set squares among my unused cookery books or to provide a constant flow of soft drinks, cartridges and wholly ignored advice. The next 10 weeks (JESUS FUCK TEN WEEKS) will be devoted to.. I don't know. Prayer? Feasting on each other's spinal fluid? Learning to mix a decent martini? Hacking the Pentagon?

Ain't no party like a Belgian school party
The second concerns my other child, who has also been taking public exams and who also finished yesterday. "So what did you do today?" I asked him when I got back from London. "In the morning we had a puberty information session," he said, gloomily "And in the afternoon we watched a film about the holocaust." Belgian school knows where the party's at. YEAH!

Cake
I decided we had to have cake at the post TBTBM belated book drinks last night, because of course we had to have cakes, so I located a place that sold choux in - of course, where else - South Kensington, the 21st arrondissement (until tomorrow, at least). They were very charming and the choux were both delicious and GIGANTIC and I met a beautiful Italian greyhound in there and one of their eclairs looks exactly like a Ferrero Rocher still in its wrapper:

So there you go. Maître Choux is the place to be if you are (i) in London and (ii) looking for a choux pastry based French pâtisserie treat (I am not sure about the pink one which is horribly reminiscent of calamine lotion).


M and I ended up speculating on what would happen to South Kensington if the unthinkable happens tomorrow.

M: This time next year South Ken will be a wasteland. The Lycée will close down and some sort of religious academy will take its place. Petit Bateau will be replaced by branches of Barbour.

E: It'll be a smouldering post-apocalyptic nightmare. Maje will be replaced by British Home Stores.

E: THEY WILL BRING IT BACK TO LIFE. ZOMBIE BHS. No more bars à vin or little bistrots. Just pubs. Shit ones with red swirly carpets.

M: Small plates will be banned and replaced with PIES. All pies, all the time. Those weird ones with creamy sauces.

E: "Chicken". It will be mechanically recovered poultry substitute but now they will be allowed to call it chicken because NO MORE EU REGULATION.

M: NO RULES. Pillows will be made of chicken cartilage.

E: Everything will be flammable. Everything. People will just spontaneously combust as they go about their business with no fire retardant anything. No more maternity leave either.

M: No more roads for Scotland. Fuck the skirt-wearers, they don't need roads.

E: All the pregnant women who would have been on maternity leave can just scatter stones across the moors instead.

M: What will happen to the Eurostar?

E: Oh god. It will be operated by Virgin Trains and only go ... to Folkestone.

Rhodri's riff on the whole sorry business was funnier, did you see it? 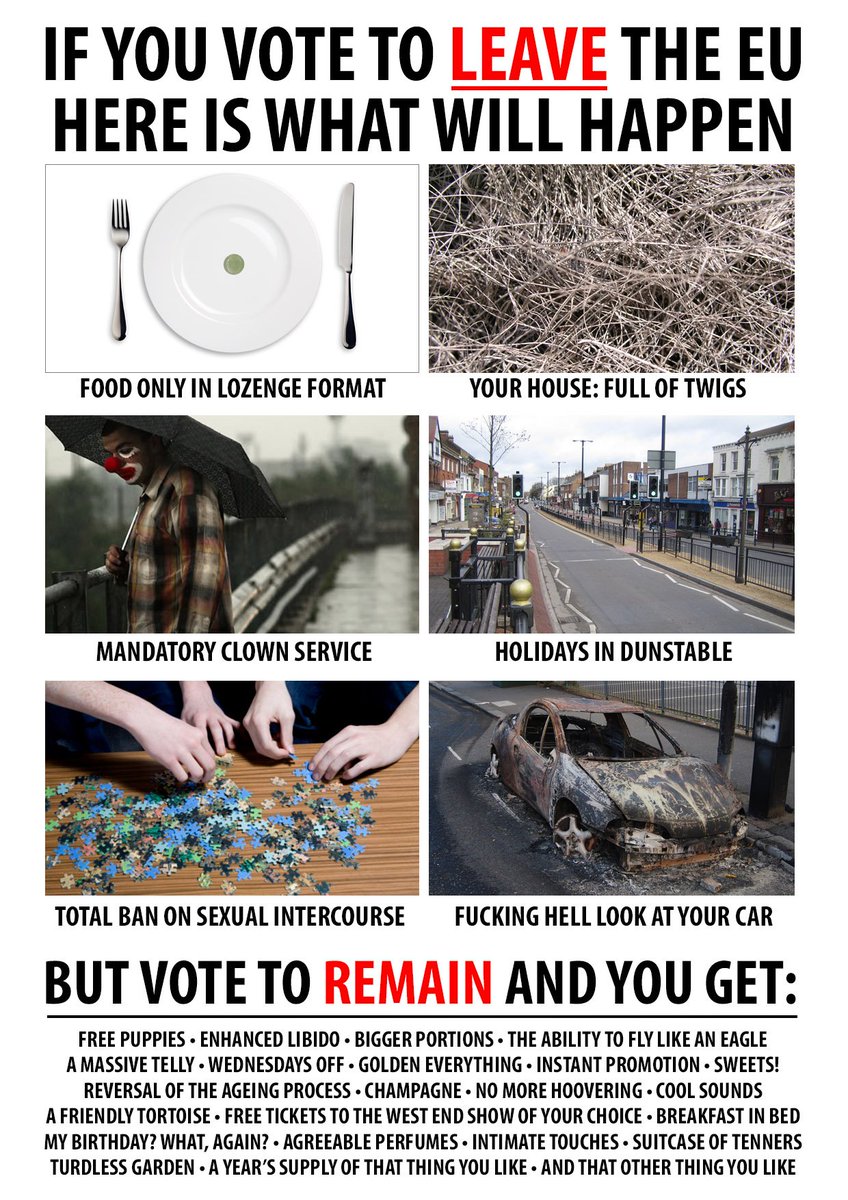 Am so glad I found your book and blog, you make me laugh!!!

You have outdone yourself, laughing out loud at your conversation. But also feeling the fear. CJ xx

Saw a Eurostar sitting in the train yard in Amsterdam, assumed it was a decoy they were tempting someone to steal, but maybe it's just the beginning of the end. They could wall up the chunnel, or use it for housing. Oh, wait, the Railway Gazette says detailed discussions are underway for service to London. They go on to use the word detailed a lot (as a safeguard), both discussions and planning will be detailed. That's a lot of details, hope someone's taking notes. No launch date as of yet, because too many factor's are outside of the operator's control. CEO said they were using the word control loosely.

Your chat with M has had me chuckling. Thank-you for lifting me from my GLOOM! This time next year I might be French, can you imagine all the red tape that will take? The eldest is doing her national exams today, then as of tomorrow we have TWELVE weeks school holiday to look forward too. That is 84 days to be precise! But first, we have to navigate and negotiate the end of year parties, school ball and festival (yes the 14yo is going to a festival - HOLD ME!) with associated sleep overs (so as to avoid going home drunk to ones own parents).
100% jittery.
BB

Oh God, my house is full of twigs.

MINE TOO STELLA. FUCKERY.

I do hope you were wrong, as the unthinkable has actually happened. 😳

Isn't it really stunning to think that people actually voted how they did? I can't wrap my head around it at all.
Loved your article in the Guardian today, laughed out loud several times!

May I comment on the choux? Is that really food? Because to me it looks like a golden turd.

I'm only now catching up on my blog reading (trauma of travelling with children; jet-lag; picking bits of vomit out of my hair, etc) and I wish I'd read this before you-know-what. Because it just seems a bit... prophetic now. Mind you, I've always sort of hated South Kensington - was anywhere in the world quite so up its own arse? - so it becoming a barren wasteland wouldn't bother me too much. But the rest of your exchange - it's like reading the script to 28 Days Later, then going outside and it's eerily quiet, and realising everyone has disappeared.

Am miss Rita from Canada. I want to share my testimony with the whole world of how i got my lovely boyfriend back. Me and James have been on a tie relationship for good 4 years from there we went into courtship planning to get married in few months time. So unfortunately i didn't know what came over James. He hard a big fight with me and drove me out of his house. He started drinking,smoking,and womanizing. Truly i was frustrated until my mum introduce me to the greatest spell caster ever. I told the prophet my problems with James and he cast a spell on him. Right now me and James are getting married next month. I want to say a big thanks to the spell caster that brought us together again. Visit Dr.Ogunsolutionpelltempel@gmail.com or call him on+2349021355818

I found lots of interesting information here.Great work
Thanks for the share loved reading the article, please do share more like this wiht us .
juegos gratis | juegos de futbol

I admire the person who wrote this post, you are so talented, hope you will promote them and become more successful. I do not feel sorry for taking the time to read this post, it is really nice and useful to me, thanks for posting it.
abcya 4, io jogos for school, friv 4 school games 2019, cá koi mini