Playing "hayfever or summer cold" full time now. Tonight's variant: hayfever, summer cold, or far too many chilies? (update: it's a cold, a bastard cold, a cold of all evil)

Accountancy snarl ups (sample note to accountant - translated from mardy French "this balancing transfer relates to a random part payment of an apparently random sum by a client made - for reasons that are entirely opaque - into the wrong account"). Eff my elle.

Brain atrophied to size and texture of dried pea. Only accessible emotion now: irrational fury. Unable to write anything longer than a two sentence complaint. I don't know what's wrong with me, some kind of post-book syndrome? Cold symptom? Ugh.

Made the worst soup in the world: 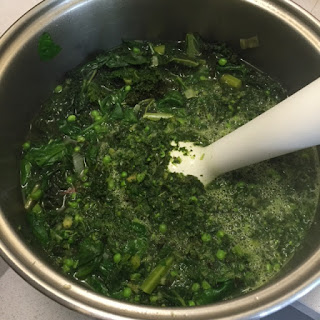 To be clear: I had no expectations that it would be anything other than horrible. I made it to stop myself going wildly off piste at lunchtime, which keeps happening since stupid Picard decided soup was only for winter and replaced all my favourite punishment variants with .. who the hell knows actually. I saw a cucumber gazpacho in there, nope. Anyway, it is worse even than I expected since the kale adds a particularly unpleasant note of stringiness, giving an overall flavour of "angry swamp". Can a note be textural? I believe it can. Come and fight me and my furious dried pea brain if you disagree.

The soup has not slowed me down even slightly in my quest to put every food in Belgium in my mouth this month.

Frustrated by my continued inability to access any seasons of RuPaul's Drag Race after 6 on Belgian Netflix. Drag Race hunger acerbated by current round of Season 8 final commentary and B sending me this most excellent video.

The TV has taken to turning itself on during the night. I lie there thinking "WHO THE FUCK IS WATCHING TV AT THIS TIME OF NIGHT" and cursing the neighbours, then realise it is coming from our house.

No more random wildcat school holidays until The Big Ones.

Garden is looking good (by "good" I mean "less chicken scarred"). This is not something I take any pride or sense of ownership in. The garden does what it likes, I do not intervene. It's better than way. 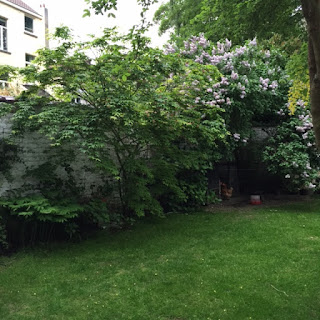 I have found a t-shirt I really love. It was moderately expensive but I feel like it is worth it because I hardly ever buy clothes and it is GREAT, loose and soft and flattering. It only comes in grey, oh no, what a shame, right out of my comfort zone. Its name is 'Pulasky' which means that I have a permanent Pulasky at Night earworm.

I have booked tickets for this Denis Meyer's installation thingy which looks amazing. He has taken over the huge abandoned Solvay building and covered every inch of it in graffiti.

Downloaded new Maggie O'Farrell which has had rave reviews and v much looking forward to it.

A lot of my ups tonight seem to involve me spending money. Ah well.

40% Rhinofebryl, which is a crap substitute for a proper cold and flu remedy whose only redeeming feature is having a name that makes it sound like a Pokémon (speaking of Pokémon, this via M made me laugh)
40% Self-loathing
20% Flan pâtissier

The cold/bronchitis/borderline pneumonia? Yes, I am doing it. (Thanks to my dear sister) I am taking some cough thing called Broncho Pectoralis. Do NOT take, it has "unfortunate" side effects.
The shriveled brain -- yes, but in my case I think it is permanent. Do you think liquids may rehydrate shriveled peas? (any liquid that is, not just water).
The TV starting up in the middle of the night? Mine has been doing this for weeks, as I live in an apartment, the neighbours are less than pleased. Complained to Proximus TV, they pretend ignorance (of course). I think it has to do with their constant updates. Best thing is to make sure you turn down the sound before switching it off.
I think I'll cheer myself up with an overdose of Melo Cakes and brain rehydrating liquids.

I always lie there cursing the neighbors. Just belligerent, I guess, but it's okay. The concept of manspreading will eventually reach them, just like shopping on Sunday. And yes, I will come and fight you and your furious pea brain. Me, Jean Brodie, and an army of empty tequila bottles. I mean it (after most of an adult life spent with Germans), we will stand before the Ardennes and say, "Wait, is this even a forest? I mean, I see trees and all, but..."


Get a break from writing, will help.
I had a post-writing trauma time when I had written something, then it was corrected and then I had to rewrite and rewrite the same thing without any inspiration. After that, I would vomit just a the thought of writing. Took some time off.

Yep,sorry,that soup does look pretty unappealing. On the upside, could it be a candidate for a punishment soup chapter in your forthcoming cookery book? Please say you are writing one, I envision a Hemsley and Hemsley style first half of god awful stuff that one ought to eat and then a sealed back section full of French patisserie!

You are the funniest person. Ever.

Are you sure that soup wasn't made with grass from your lawn? Dear Waffle, life is punishment enough as it is. Ditch the horrible soups and stop with this madness! You'll be having green smoothies for breakfast soon, it's a slippery slope. If you really must eat kale, chop it into "ribbons" and have it with some sautéd minced garlic in olive oil, with a dusting of good salt flakes on top. Then have a flan to compensate because too much kale is bad for your thyroid (really).
I fully sympathise with the eating everything in sight syndrome as I have a really bad case of it myself. Life is short (and so am I, which does not help).
30% hormonal mess, as confirmed by recent detection of (multiple) uterine fibroids. Doctor doesn't seem to mind them at all but I would very much rather not have them, thank you very much. She mentioned that these things are very common in the run-up to the menopause (am I really that old??!!). Further medical tests scheduled for the near future, including a bust-flattening mammogram (as if they weren't pitifully flat enough already).
30% totally avoiding the fact that it's tax season and that I have a tonne of paperwork to sort out and take to the accountant. My filing system of building little piles of random receipts and sweeping them up into "I'll tidy this later" bags is not very effective. Just the mere thought of the task ahead is making my heart beat faster. The last time I talked to the accountant he offered to drop in to pick up my files himself, seeing as I am so busy. I made up some rubbish about being out of town but it's only a matter of time until I have to get to grips with the paperwork and prepare a file I can actually give him.
30% pain in shoulder, upper back and neck due to poor posture, many hours of work in front of the screen, lack of exercise and stress. When it gets really bad I can barely lift my arm. Self-employed so no way to get time off work without losing income. Should set aside time for regular physiotherapy but not good at self-care.
10% so incredibly tired all the time, probably because of waking up in pain several times a night.

Our doorbelll plays Oh Susannah every time our neighbour unlocks his car. He works shifts. You cannot eat that abomination of food especially in spring. At least have some asparagus. Anonymous can you change your work station for different times of day? I left hand day mouse and and evening right hand trackpad.

That is one ugly soup. Eat something pretty.

Ok, the people have spoken and I will just bathe a tortoise in the soup leftovers or something. I am sure you are all right, I am just trying to fend off the Endless Fattening. No more kale.

That's a good idea, Kath, I'll have a go and see if it makes a difference.
Waffle, apparently there is a thing called kale cake: http://veggiedesserts.co.uk/kale-and-apple-cake-with-apple-icing/
You're welcome! ;)

Your garden really is looking lovely! I aspire to have a garden that does what it likes in such an appealing way. At the moment it has bits that do but alas also bits that really do not. I am trying to assimilate the latter into the former category, but this turns out to take work, indeed a sort of work that I am not at all good at (aka gardening). Tricky.

This post is very useful, I admire the author, hope you will succeed in the next post, I will continue to follow your post. The article was great, I accidentally saw it and I was really attracted to it, hoping it would be well known.
abcya online, jogo io online, friv Games online 2019, cá koi mini

It truly is moreover a great write-up which i undoubtedly relished reviewing. It may not be specifically day-to-day which i build an opportunity to get whatever. Watch The Sims 4 channels streaming live on Twitch. Sign up or login to join the community and follow your favorite The Sims 4 streamers! sims 4 news