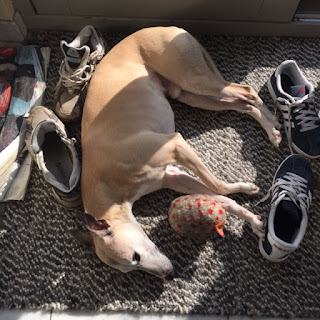 I'm having one of those days where you just want to punch yourself in the face repeatedly. I'm going for a walk to see if that helps.

(Nope, it didn't. Nor did: shouting at the Roomba or eating my feelings to the tune of most of a large bar of chocolate, two hot cross buns and a gratuitous bagel. My son's homework on the sacrament of "réconciliation" (trendy priest name for confession?) definitely didn't help. This Farming Life did, including the nail-biting birth of Jumbo the GIGANTIC Limousin calf.)

M and I have been discussing Trapped.

M: What percentage of their life do you think people in Iceland spend trudging through snow? If Trapped is anything to go by I'd say 75%.

E: That sounds about right. What's the other 25%? Being in boats. Joyless sex. Terse conversation.

M: Putting on and taking off parkas.

M: Freezing fish. I can't say it's really making me want to go.

M: Not even any good looking snacks.

E: No! What do they eat? It's so dark you can't tell. Brown things?

(I actually really really want to go to Iceland and not just for the Icelandic horses and their special gait or for their gigantic bear men who never fasten their coats, but because it looks beautiful and enchanting and everyone I know who has gone comes back crazy for it and also because of Names for the Sea, which I believe I have personally been responsible for selling three copies of)


Percentage occupations of the general populace in Uccle:

This chocolate
This easter egg
Bedtime

WHY DO THEY NEVER DO THEIR COATS UP??

Done up winter coats - no cool. The winters in northern Sweden were really cold in the late 70's, coinciding with my mid-teens. Attire: trainers, v e r y tight jeans, bulky waist length down jacket (open) and of course no cap or wooly hat god forbid. Not even after swimming practice. Hair gets pretty icicly in minus 30 C.

Names for the Sea. SO GOOD.

Thank you so much for that link - it improved my day by leaps and bounds.

Your chocolate mousse cake is so delicious. I didn't have Vanilla extract so I added a shake of nutmeg powder. When it was done I chopped some strawberries into quarters and pushed them into the surface. I served it cold. It is simply excellent. I'll have to make it every day now. So easy, so fast, so delicious! Thank you!!

Anon - Obvs I can take no credit for the cake whatsoever but isn't it brilliant? Literally no effort whatsoever.

Actually, you can take credit for it because if you hadn't posted it I would never have known it existed. It is a gem of a recipe. :)
I hope today is being a bit easier than yesterday. Your pyjama-less child will probably come up with a very practical solution, no doubt wearing his ski thermals instead or something. Maybe some overzealous mother packed too many sets for another kid? Maybe the teachers bring some extra items just in case? 12 days is a long trip, lucky boy! It's a week at my kid's school and she had an absolute blast of a time. I don't have any advice about chapped lips, except maybe some Neutrogena lip balm? Their hand cream works wonders for me, as does the foot cream so it might be a good call. Maybe get some lip balm intended for using when skiing? Might be more effective? My kid has taken to putting toothpaste on spots and pimples at night, probably advice dispensed by a certain Youtuber of whom young girls are very very fond. It seems to work for her, anyway. I have no advice ever about Dreaded Pieces of Paper as I have despaired of ever having enough of them or at least having the right ones at the right time.

I have a passive aggressive dog too - she follows me around the house and whenever she thinks I am settled somewhere, she arranges herself on the floor with a BIG SIGH (how do they do that!?) to stare at me with sad baleful eyes. I delight in moving just after she's done that so she can do it all over again in another room.

Renia - God, I know. The eyes of reproach that follow you from room to room.