I really, really want to tell you about the Airbnb we stayed in in Paris but I feel weirdly bound by some kind of self-imposed guest-host omertà, also deeply ingrained habits of social deference built up over generations of peasant servitude that had me carefully wiping droplets of water from the sink before we left to universal derision from my (French, republican, insoumise) family, so I am sorry, I will have to keep it to myself beyond saying: hunting trophies, polo, royalty, a dog called Tripe. Or possibly Fripe. It was amazing anyway and there was a view of the Eiffel Tower from the balcony and about 5 top quality pâtisseries within yards of the front door and I cannot recommend it too highly, email me if you want the actual lowdown.

I can however tell you about our trip - imposed by me - to the excellently strange Musée de la Chasse et de la Nature, to which everyone accompanied me very reluctantly indeed. We were followed around by a lonely, garrulous and really quite strange security guard who insisted on giving us a full commentary on all the works by contemporary artists that were part of the temporary exhibition. "This gentleman tied a chicken to his penis to protest about something...." "This man looks just like Bruce Willis..." "This model of a heart is by an artist who went to Romania to inject herself with mare's blood... It's illegal here."

Me (fascinated, ignoring furiously reproachful gaze of eldest child): What did the mare's blood do to her???

Guard (mysteriously): It made her Sleepy.

When his back was turned next to the animatronic talking boar's head they made me run away to the second floor which was almost entirely empty apart from a very strange room with a gigantic (fake) stuffed gorilla: 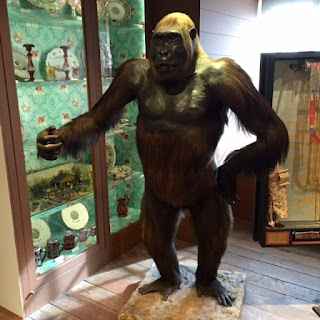 and some of the most disturbing wallpaper known to man: 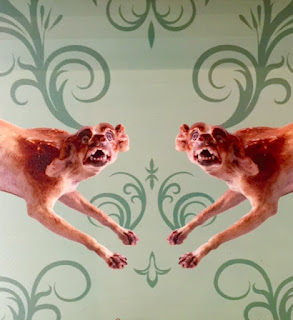 These dogs are how I look most mornings 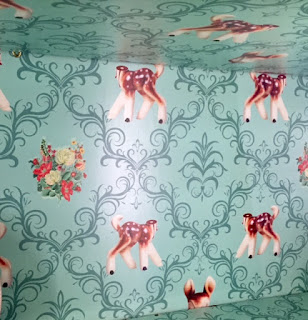 On the ground floor there is this ceiling decoration, which is probably the most famous bit of the museum and an excellent interior design element for any dwelling, I would Pinterest the fuck out of it: 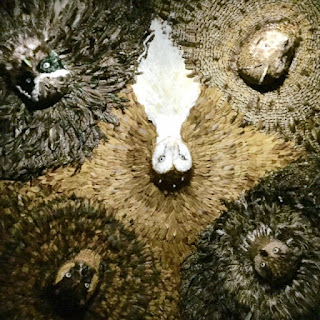 There were also some baboons playing cards: 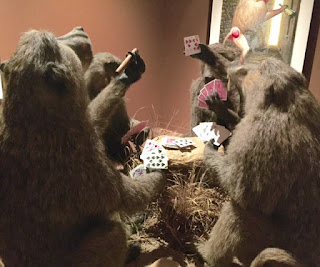 And this delightful fox on a chair: 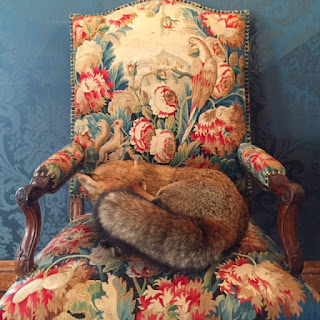 The whole excursion was received with a sort of blank horror/resignation by my family and after the gorilla, my suggestion we go and look at the model guillotine and Proust's bedroom in the Carnavalet was greeted with literally no enthusiasm whatsoever. Faced with this mass cultural insurrection, I gave in and we went for lunch instead. Philistines.

Here are some live animals in case the stuffed ones are not up your strasse either, in the form of a gigantic Normandy cow (the best cows): 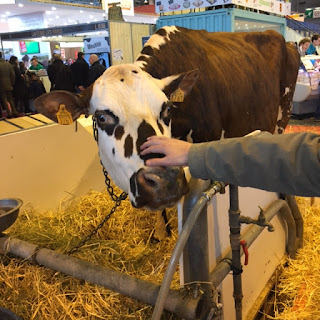 ... and some sheep that had been decorated with pompoms for reasons that were not explained whatsoever. Perhaps you don't need a reason? Are the pompoms made with the sheep's actual wool? So many questions. 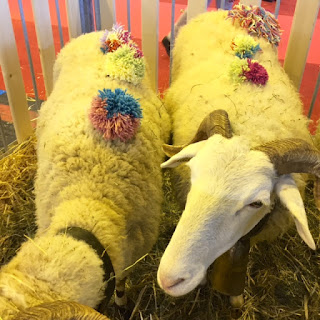 My goodness, the beheaded-Bambi/hounds of Hell wallpaper is truly the stuff of nightmares. Fox on a Chair however I would be tempted to make off with. Only this morning a friend sent me details of a taxidermy course; I fear the resulting headlines ('Mysterious abductions of small animals in sleepy Cotswold village' &c, &c) too much to sign up ...

I am in awe. Where on earth do you find such things? Afraid my attempts to educate the offspring fall woefully short of yours.

p.s. why are baboons playing cards? Is this a reflection on the state of the gaming industry?

I love, love, LOVE the Musee de la Chasse - it is properly bonkers. The last time I was there, I saw the most bewildered-looking Japanese couple being given a guided tour by an over-enthusiastic Spanish woman, which only added to the madness...

I was reminded of you yesterday when listening to the brilliant David Sedaris read 'Understanding Owls', whioh if you haven't read, is here and is marvellous:

I am most impressed by the cake, by the way. As a child, the best I ever got was a cake in the shape of the number of my age, which was completely lame until my sister recreated it for my 40th, by which time it was retro brilliance and I cried with joy.

I presume you're following the Debo auction, by the way? I note that Her Grace's Collection of Elvis Presley Ephemera went for £4,375...

I listened to David read Understanding Owls, which is probably my favourite of his essays (I adore him), on Radio 4 Extra last week, it should still be available on the iPlayer. His voice and interpretation make all his stories extra hilarious. I thought about the strange North London taxidermist when I saw the fox on your Instagram.

You'd be a far better companion than my family, Jane.

LCM - Dunno, but one of them was cheating.

It's not fair that you were at the Musee with your unappreciative family instead of with me, who would have been fully on board with the experience. Five stars out of five.