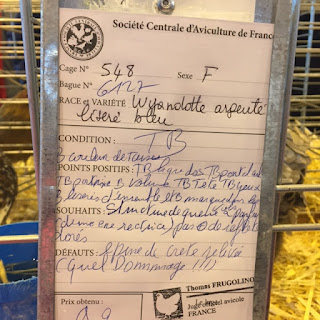 With my unerring ability to miss the point I became fixated at the Paris Agricultural Show by the little cards stuck on the cages of the prize winning (OR OTHERWISE) chickens and pigeons and more particularly by the "défauts" box. 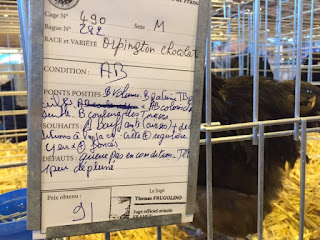 "Traces of black in feathers"

and my favourite (above) "Crest spike sticking up WHAT A SHAME!!"

Poor chickens. There was one gigantic pigeon who had simply had "DISQUALIFIED" scrawled across its little card due to not being in showing condition. The shame. I could only imagine what such a card might read for me, I mean my tête is definitely déplumée for a start, my tail flat and low. 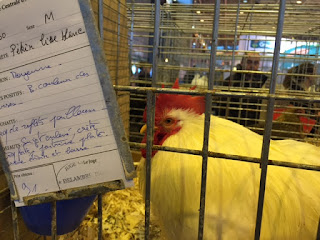 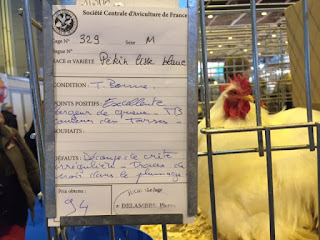 You would never have guessed these chickens were anything less than pure magnificence. Many of them were the size of space hoppers and most of them had luxuriant, ridiculous plumage. Look at this guy: 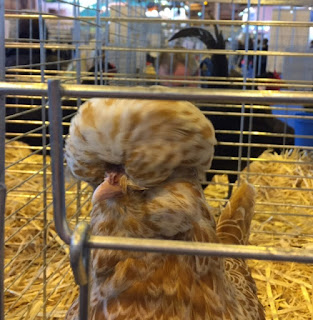 Can't see out, gives no fucks.

Back home in less edifying chicken news the Evil Quail (= new hen Pepper) has been applying herself to pecking the heads off each and every one of my pathetic crop of daffodils with forensic accuracy. I hate her.

My younger son turns twelve today, having bodyswerved a Leap Year birthday by hours (Leap Year in Dutch = Schrikkeljaar, fact fans). I am not going to pretend it feels like yesterday, it feels like a really, really fucking long time ago, a whole lifetime, three countries, five houses, all manner of angst and trauma, several dead pets, but throughout it all he has been as much of a force of delight as he was back then, when he was genuinely the only good thing to happen to me in 2004, instantly so very much his decided, long-fingered self. Among his other mainly Rubik's Cube themed gifts, I have purchased him an Owl Evening what, no, shut up, he DOES like owls and of course I have to go too because it would be no fun on his own and also who would take pictures? I have also made this frankly demented cake, using Frances from Bake Off's equally demented baking book (thanks to Lee): 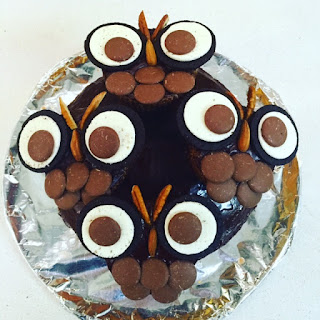 Pretty sure these guys would be disqualified instantly from the Salon de l'Agriculture due to their inadequate plumage. Toby on Twitter said it looked like "a delicious, judgmental version of Bohemian Rhapsody", which I liked a lot, though I reserve judgment on the deliciousness, the scales turned themselves off halfway through me pouring sugar into eggs, and I had to guess. Every part of the kitchen is sticky and chocolate smeared, I found it impossible to split Oreos without breaking them, have back ache and forgot the fucking walnut fucking wings, but never mind. Happy birthday, kiddo, I'm sure you'll find this cake mortifying and stupid, but that is what parents are for.

I have added my February reading to the Reading page. Not a very impressive month and I feel like I have forgotten something but seem unable to track it down. Will add if I remember.

'Tis nonsense what you say that the only thing you can bake is scones. Look at this owl wonder! Happy birthday to fils numéro deux, BBxx

Your cake is wonderful, I am considering trying to bake child bday cakes again after purchasing sponge bob and paw patrol cakes this year! You have inspired me xx

That cake is magnificent, and you only feel otherwise because you made it yourself. If you saw that exact thing made by anyone else, you'd be all brilliant!/amazeballs!/formidable!/[Belgian equivalent]. I share this affliction, but I find that time fixes it. Look at that picture again in a year.

I saw a Great Horned Owl in Arizona on Thursday. That is all.

Dear Waffle,
In the midst of the absolutely harrowing experience of accompanying and trying (mostly failing, alas) to help a loved one in the midst of a long drawn-out breakdown, your blog updates have consistently managed to make me smile against all odds. The depths of despair are very bleak but your light is stronger and it reminds me that not all is lost and that maybe some day we will manage to climb out of this, dust ourselves off and take up where we left off a few months ago. It's incredibly tough and I'm almost spent from worry and from being in a constant state of anxiety verging on panic. Thank you for your lovely witty posts, for your lovely droll sense of humour, for how well you describe your life and your lovely boys. If there is one thing I have learned in this horrendous experience is that schoolwork/grades/academic stuff be damned; the only thing our children need is to feel fiercely loved, accepted for who they are, grounded and anchored to the world they live in. The worst thing is that I keep second-guessing myself and wondering where I/ we went wrong. Mr. Oliver James' recent article didn't help much in that regard. The rational part of my brain says that there's an element of luck involved but the irrational part keeps going over my failings and trying to identify which of my many mistakes may have been to blame for things going so wrong.

Wow, that is one fantastic cake. I'm storing it away ready for my eldest's birthday in October, he's a mad keen birdwatcher. He had a falconry experience for his birthday a few years ago and loved it, it's an excellent gift. I hope your youngest enjoys the owls. CJ xx

Anon, I feel for you! We've had a brush, no more I guess, in perspective, with The Abyss regarding one of our kids. Very tough experience and I totally agree on your conclusion about love and acceptance. Courage!

Waffle and Cruella, you are both very kind. Thank you.
You're right, I shouldn't have read that stupid article but I felt compelled to because it's the thought that keeps buzzing around in my head, if I am in some way to blame for what is happening or at least for not being able to contain the pain or make it stop. Like when kids are small and you swoop in with a band-aid and a kiss and it's all forgotten. It's so hard to keep being the strong one and to keep telling everyone involved that tomorrow will be easier when I don't really believe it myself. Last night I cried for the first time in a long time, tears of utter despair and fear at how much worse things may get. There is plenty of help, medical and otherwise, but nothing seems to be working somehow and I'm at my wits' end I suppose.
It's highlighting everything else that's wrong about my life as well because I have nobody close to confide in about it so I'm feeling even more isolated than usual. Sorry to offload this here, please feel free to delete the comment if you want.

Anon - That is basically why I started a blog in the first place, the isolation and no one to confide in, so please know you are entirely, utterly welcome here and I only wish I could do more that wang on about chickens xxxx

Try looking at the camera here
very soothing, and you can pop the viewer out
http://explore.org/live-cams/player/pacific-aquarium-tropical-reef-habitat-cam

Those chickens in cages scare me, like they'll peck you to death in their sleep. We used to have chickens and it was a happy day we boxed them up and gave them to my stupid (no really, he is) cousin.

I am the queen of making penis cakes. To my kids they were rockets but all the adults knew and would snigger like the puerile infants we all are. One time I used a jam roll as the rocket body so when we cut into it it was positively anatomical.

I absolutely adored all that stuff about the chickens and the comments about their 'faults'. I should have had hens/fowl/chickens instead of children...especially daughters, because even the slightest comment, not intended in any way shape or form to be judgmental, can be wailed about and held against me forever! The tiniest remark, no matter how innocently uttered, has come back to haunt me time and time again...even very banal advice, sought by the daughter, can be the cause of an argument. But Chickens! You can make any kind of derogatory statement and slag them off and what...cluck cluck! Love it!
Thanks very very much for your wonderful blog, and good luck to the poor Anon going through all that hard stuff. I've been there and sometimes all you can do is keep yourself safe.