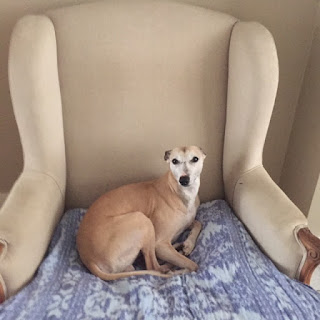 Oh uh, hi? I wasn't expecting you yet?
(Not allowed in this chair and knows it)

I'm stuck in front of the incredibly repetitive coverage of Salah Abdeslam's arrest for hours even though there's really nothing much else that is going to happen and it is melting my already beleaguered brain (do you like how I always have an excuse for the day's post being a bit shit? You do? Good!). Other news ("news"):

1. I have not broken or fallen into anything today.

2. I do not think this is connected to Salah Abdeslam's arrest. He went to my eldest son's school for a while, have I mentioned that? We got a letter about it and everything.

3. I have also not eaten any hot cross buns. I suppose there is a hypothesis to be explored regarding whether hot cross bun consumption and falling over are correlated but I do not intend to do the necessary exploring.

4. I had to translate something about bottles of €35,000 cognac today. Seriously. Thirty five thousand of your earth euros for a bottle of booze in a fancy box? The horsemen of the apocalypse will be swilling this stuff when they ride in on their white, red, black and pale horses (what colour is pale exactly? Is it like Farrow & Ball Pale Hound?).

5. I found this very interesting on writing about yourself whilst being female. It deals with some of the questions I've been struggling with in a much braver and more articulate way than I have ever managed. My approach: decline into acute anxiety, then attempt to claw way back to normality with long walks, Dutch classes and disgusting "Bonne Nuit" herbal teas. I wouldn't exactly recommend it, though I'd like to write something about how helpful Dutch Class has been at some point, because it has.

6. I tried to elicit from a neighbour what happened in our street Tuesday night earlier and ended up with (a) no information; but (b) the maddest series of paranoid statements about being phone tapped, having to deal with a shadowy network of Bad People in the mean streats of Uccle and something really confusing about a bag of kiwis. We don't really have a common language which made it much harder. The moral of the story is: GO TO THE GUY IN THE CORNER SHOP. He can deliver straight up gossip with no crazy embroidery. He knows what we want.

7. Bald Eagle chick courtesy of excellent avian correspondent Sandra (ed's note: Sandra is not a bird) (ed's further note: well, I don't know for certain, but she writes in excellent English if she is a bird).

8. I have a small tax rebate! Are there any lovelier words? Free buffet? Cashmere gift? Miniature donkey foal? Debatable. The only problem is, as with last year's tax rebate I do not actually believe in it, and assume it will be reclaimed in the future, so I will be duty bound to hide it in the savings account I don't know how to access, rather than buying fripperies. Should I allow myself ONE frippery? And if so, what should it be? I need to get my eyebrows redone, but that, since it involves fairly painful head tattooing, doesn't count as a frippery, though it is extremely expensive. Hmm. Also, the rebate hasn't actually arrived, just the piece of paper saying it is coming one day. That day is likely to be some months away, so let's not get too excited. 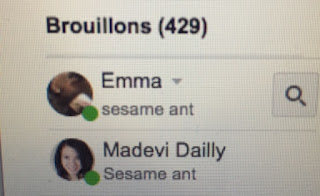 ("Sesame ant" refers to the time we went to a promising from the outside but in reality terrible noodle bar in Ghent and found a live ant living in the sesame seed grinder).

You? What do you think is the happiest phrase in the English language? And what would you buy with a small but not ridiculous tax rebate?

The very idea of that lavishly expensive liquor makes me tear out my hair. Not because The Rich have this much money exactly. It's more rage at the pure banal stupidity of the things they buy. They are practically drinking money while I can't decide if I can afford an eyebrow threading.

I'm confused Ellen, is it your eyebrow hair that you are tearing out?

For the pale horse, I think from some half remembered research I was once doing it was greenish, or kind of pallid and sickly? I think it may be Death's horse so it's the kind of colour you associate with death and sickness (green/grey/white). Bear in mind I have not moved out of pyjamas for two days while this virus ravages my lungs so take that with a pinch of salt! I would vote for free puppies as my happy phrase! For the tax rebate as a make up junkie a new (unrequired) lipstick or an excellent bar of chocolate.

My happy phrase is, 'Last day of class before summer break.' I may not get paid much, but I do enjoy the academic calendar.

Was Salah arrested in your street? Exciting but sad times! My happy phrase would be "You have won.... " - last week a family pass to Zootopia. Hoping to win the Carla Loves Photography comp on Facebook for a Portrait shoot in Paris however! Or an art show. Or money. Or all three.

I promise I am NOT a bird. Bird brained perhaps, but not a bird.

So glad to see you & yours are physically ok! Holding you all in the
Light