GOOD EVENING. I've had a Spritz on an empty stomach, also I have no charger and 15% battery and my family are watching that Lancastrian wolverine Guy Martin very loudly in the background, so if it's coherence or sense you're after, I recommend you move right along.

The fucked up relationship between the physical world and my body continued today when I tried to go behind someone's chair in Dutch Class and ended up hooking a large, heavy metal panel off the wall and into her back. It was HUGE and LOUD and the whole school heard it and I don't really know how the hell I did it or what the fuck is going on. Here is a photo which fails to illustrate the result in any clear manner whatsoever: 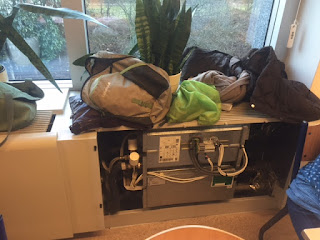 All I can tell you is that that hole full of wires and shit used to be a smooth cream WALL before. The teacher had to stop teaching and call the maintenance service to explain that one of her students had ripped a wall panel off causing a major health and safety issue.

M: Maybe your brain is trying to rearrange the universe

E: By breaking it?

E: Well it's not going great for either party.

Also in Dutch Class the teacher asked a man out of the blue about whether he was simultaneously seeing his first and second wives, which was (a) a bit forward even for a Dutch person and (b) quite challenging vocabulary wise.

I was texting my father absently earlier while refreshing Twitter (what shut up my work ethic is FINE), when I realised I had just scrolled past a photograph of him. He was opening the new Land of the Lions at London Zoo with the ACTUAL QUEEN (not to mention an ACTUAL LIONESS prowling around behind him looking pissed off) at that ACTUAL MOMENT. I was quite discombobulated, but also very proud. Look, here he is talking at the start, then generally hanging out with the Queen. There is also a clip of him showing her a highly decorated wooden cow. I would quite like a lion related honorific as his daughter, eg. Daughter of Lions? Surely this can be arranged?

Very impressed by your Lion connections. Will look out at work for tht dept responsible for lion based honorifics.

For a moment I thought your Dad was Teague but then I realised my mistake. You must be proud of your Dad as well as being part of his pride. (OK that was the best I could do with the lion reference.)

You must be so proud of your pa. Saw your tweet on the subject yesterday and think that it should be held up as a shining example of how to bring attention to something incredibly wonderful and pride-inducing without resorting to humble-braggery or worse. It warmed my heart and brightened my day.

And the physical comedy continues. Perhaps it is the universe telling you to try a new career.

In your next memoir you should definitely position this reveal about two-thirds of the way through. Now to scroll back to look for more animal themes! (OK, not really, back to work really, but if this was actually a novel that's what I'd do.)

Emily - Ha, it wasn't a secret! I thought I'd probably talked about it before? No? He's only been KING ZOO for a couple of years, but yes, the whole capybara/raptor thing is definitely genetic.

Oh wow, lucky you having a Pa who is KING ZOO - I love that place having spent most of my childhood weekends there. So looking forward to seeing this new lion place -and maybe booking one of those amazing looking overnight stays too!