We saw younger child off on the 12 day school ski trip last night (this is NOT POSH, all the children in Belgian state schools go, I don't know why I feel the need to iterate this, but I do), half an hour lurking in a darkened car park to wave the coach off to universal indifference from the massed ranks of 12 year olds. Now there is only the oldest child to "parent", the one who ignores me 95% of the time and spends the other 5% either asking for money/juice/his mislaid property or playing, enchantedly, delightedly, with the loose skin on my neck. I have big plans to get a lot done and write fascinating blog posts, which will doubtless come to nothing more than catching up on back episodes of Trapped.

My lunch was very successful thanks to commenter Bad Bride's suggestion of Smitten Kitchen's Chicken Pho, which she described as "so, so stupidly easy you cannot fuck it up" this being EXACTLY what I want to hear about a recipe. It was delicious and I in turn commend it to you. There was not a single difficult element to it. Did I deep fry the shallots? Did I fuck, I bought some of those crispy onion bits from Tinie's which is my favourite shop in Brussels and which I also commend to you if you happen to live in Brussels and are in the market for some insanely well stocked no nonsense asian grocery good times. I have noted down all the other recipe recommendations for future attempts at "food other than Old El Paso and pasta" or "socialising" and thank you very much indeed for them, they all sounded excellent and quite idiot-proof.

I also made this chocolate mousse cake, which was as easy at it claims and a big hit, served with some slightly squashed 3 boxes for €4 raspberries off the market and some whipped cream, thus: 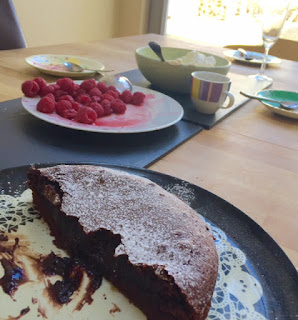 Earlier in the day I also made some immensely delicious dark chocolate fleur de sel cookies, by sort of adapting this recipe so they were fudgy not chewy and adding milk chocolate chunks, thus: 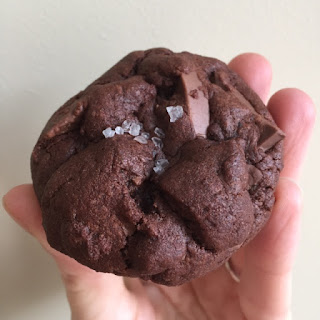 Now I feel slightly bilious and have a champagne headache and my main plan for the rest of the day is to watch yesterday's 50 Minutes Inside, TF1's trashy celebrity magazine show, with a succession of cups of tea and Nurofens. I do not plan to cook anything even slightly ambitious again for at least a week. Though hang on, I have a vague plan to bake some of the cakes in my book to try and lure you into buying it, so that might be a lie. I'm not promising, I still have to buy fondant, several esoteric cake tins and a selection of nozzles and the mere thought exhausts me, so it may all come to naught and it will be my own fault if I only sell 1.7 copies of the book as a result.


I hope Eric wins Crufts tonight. Here are some more pictures of him looking magnificent.

5% Full-throated train whistles of my people in the distance (mostly when I'm awake at ungodly hours).
45% Going through crap (notes from dead people to other dead people, etc.--some of which is quite interesting).
30% Used my hands on something besides drudgery.
15% Getting ready to spend a week in the place I fit best. The contrast is always a little disorienting. Might even involve a whale, or a baby otter.
4% Immigration trifecta.
1% Huge moth.

That champion low-rise floofy thing is wonderful. Almost entirely, but not quite, unlike a Proper Dog. It would confuse my weepette no end - like how we met a obese pug at the weekend and she didn't know where to sniff. (On second thoughts perhaps it's a bit rich for me to exclude Eric from the realm of Proper Dogs when Honey isn't exactly a garden variety either...)

Wonderful chocolate biscuit triumph too! As a student I worked at a patisserie, where I learnt not only the secret of "chocolate + salt = magic" but "chocolate + chopped fresh rosemary = really special magic". There's failsafe recipes for chocolate & rosemary brownies and choc chip & rosemary chewy biscuits on my blog if you're ever interested!

At risk of sounding like an 86-year-old French woman, the ONLY thing that works with colds is First Defence. Got tip from On The Spike. Trick is to overdose on it, like something out of a Brett Easton Ellis novel. The adults in our household have had our first cold-free winter, despite the (non-snorting) minors in multiple viruses.

Are there cake recipes in your book or just eating? 🍰🎂🎂🍰

Renia - No recipes. This will be entirely a BONUS FEATURE* (*semi-comic disaster)

Marlz - I am going to find out about these rosemary cookies INSTANTLY.

Ooooh! I'm glad it worked out. I cooked a huge Vietnamese meal on Saturday night for 26 people. On reflection, it was a great success but at the time, it nearly killed me and made me quite tearful and mad.

I really rate Deb Perelman's recipes in general, if you have a slow cooker both her South-Western pulled brisket and her Chicken chilli are as easy as the pho and have enough of the Old el Paso about them to please children. And her crispy egg salad is my default working from home lunch, lots of raw vegetables so almost penance BUT with an amazing crispy fried egg.

I will have to add that mousse to my MUST MAKE list. Sounds obscenely good.