I have been totally cool about the whole terror threat stuff, lockdown, whatever, but yesterday with two armed fugitives still allegedly en fuite (not that this necessarily makes them any more dangerous than when they were holed up in their nice arsenal in Forest I suppose, also how many armed fugitives are STILL en fuite since November? I have lost count), I did get slightly ruffled when the police closed down our street with cordons and tape and sat in their police cars right in front of next door for HOURS, literally about 4 hours. 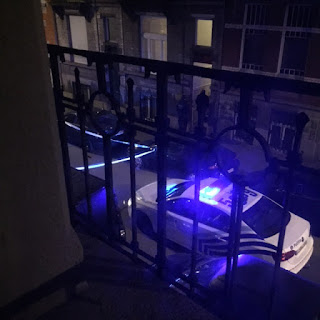 "If the neighbour has been hiding Salah Abdeslam in his saxophone case all this time," I found myself thinking "I am going to be fucking FURIOUS." The atmosphere outside was not exactly one of febrile urgency, more bored standing around and there were no men in balaclavas and armbands, but nevertheless I double locked the front door and closed the shutters because you never know. This did not prevent me from falling deeply asleep within seconds.

Anyway, they had gone in the morning and I haven't had the mental wherewithal to go and get the full lowdown from Corner Shop Guy, so I may never know what was actually going on.

I am having one of those days when you are slightly, but critically, out of kilter with the universe on some basic physical level and many disasters ensue. I have forgotten my keys, broken a glass, spilled tea in my bed, misjudged the tipping of some spinach into my punishment soup (the tipping of spinach into already spinach flavoured soup was my first error here) causing the most ridiculous degree of splashing/spillage (jeans and cashmere jumper liberally coated in slimy green soup, also work surfaces and floor, dog uninterested in helping with clear up) and let us not even try and count how many times I have dropped my phone. This all culminated horribly in the supermarket an hour or so ago when, having foolishly chosen not to take a basket for my purchases, I made some kind of involuntary flailing movement and had to watch as my litre of milk flew up in the air, then, describing several athletic flips, landed with unerring accuracy RIGHT on top of a box of twelve eggs in the basket of the woman standing next to me. It was as bad as the time I catapulted a prawn into a woman's handbag in a Parisian noodle bar, actually it was worse because more noisy. I am a bit frightened for the rest of the day and indeed am sending a child for the traditional Wednesday frites because it seems safer. The child is thrilled. Apparently "you can get yourself a can" is insufficient blandishment for the over-stimulated, jaded, youth of today.

I have also made some kind of pecuniary declaration of intent by buying several key items for my proposed patisserie challenge, a spatule with an elbow, apparently essential, lots of vanilla, some whole milk (hence the supermarket flailing shenanigans), a cadre pâtissier and other nonsense. Jesus, I am fearful. What shall I try first? I am still waiting for a kilo of fondant pâtissier to be delivered from some esoteric French trade website so religieuses are out. Flan? Paris-Brest? Some kind of Opéra? Help. My percentage success rate with crème pâtissière currently stands at 0%. I have managed choux pastry in the past, sort of, but everything else is a mystery. I am using this book, which seems to make out that everything is a piece of piss as long as you have the spatule with the elbow and the cadre for patissing: 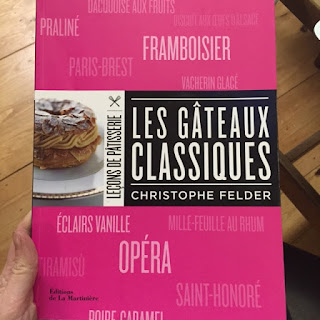 We all know this will turn out to be a grotesque lie.

One of the cakes is actually called "Success": 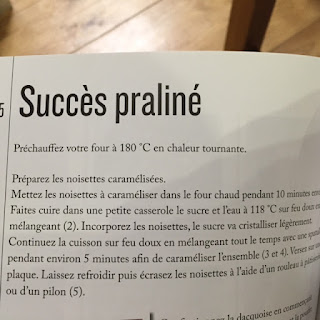 And yet I note that the first instruction involves boiling sugar and a sugar thermometer. That is CRAZY TALK, Christophe and my trust in you is already dwindling.

Dutch word of the day


50% Why are Belgian stamps designed by 8 year old girls giddy on a diet of Haribo and Cute Overload? Whither dignity?
50% Totally buying some of the kitten stamps for my next VAT return and will absolutely charge them to the 'business'.
0% En fuite

Offset spatulas really are the best, though.

I love your blog and everything you write. I'm really sorry you had a rotten day but I have to admit I laughed out loud at your description of the milk falling and the memory of the prawn flying into someone's handbag. I think you're definitely allowed a duvet day off from everything to recover.
The universe is telling you that you've had enough green soup for the time being, go back to KitKats and religeuses. If you really must be virtuous, you can make quinoa or something that won't spill and that can be eaten cold.
I recommend getting a cake pop kit so you and your boys can make brilliant cake pops. Really easy and fast and they look brilliant when you dip them in chocolate and stuff: http://www.amazon.co.uk/Sweetly-Does-It-Silicone-Mould/dp/B007J3JMUU
Be safe, dear Waffle! I hope they catch the b*stard terrorists soon.

'En Fuite' sounds like the sort of culinary instruction you might find in a fancy cake recipe. 'Des Pralines en fuite'. Certainly more cakeesque then Paris-Brest anyway, which sounds to my untrained ear like a bicycle roadrace.

Oh and I was going to say I am 100% en fuite myself today, having taken the rare step of skiving off from work halfway through the afternoon and hiding in a suburban chainstore coffee bar for three hours writing- a rare blissful escape. Hmmm actually maybe 50% en fuite, 50% overpriced chainstore caffeine overload.

Loving all of it, as ever. The Dutch for 'elbow' was worth the admission fee on its own.

I think that in civilized countries such as Belgium (not Canada) one can buy pre-made praline paste, saving nightmarish experiences with nuts and sugar and how-to-pulverise.

Jonathan - Paris Brest is a bicycle road race! Your ear is clearly highly trained. The Paris-Brest is supposed to look like a bike wheel.

I have been thinking of you with all the terror alert malarkey, the cop car parked outside would have simultaneously thrilled me and made me cross.
I have spent five hours fixing my computer from the fix that I made, so all in all, situation normal.

I also laughed out loud at the milk flailing incident. Did the eggs break?

If only our governments could be as sensible as you.

Elleboog is now on my list of favourite non-English words, right next to gruau and pamplemousse.

Patience - I sank to my knees to examine them and she glared at me, so I ran away (but yes).