Happy easter! Don't get excited, I haven't made any cake yet.

Instead I went on our old lady hike yesterday which got harder than we were expecting and we had to haul ourselves up this bit using ROPES: 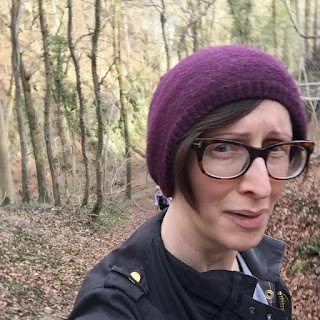 At one point we met a group of people walking an even larger group of French bulldogs, one of whom was called "Roger" and another "Marvin", which was very pleasing. I also saw a magnificent hen at the end of the walk and had to remind myself I spend large swathes of every day cursing the ones we have.

Easter weekend is a bit odd when your children are too large for egg hunting (not that it would have been possible outside given the absolute trashing our hens have given the back yard) and you don't have any family roasted animal and resentment obligations because your family lives in other countries, so we had pho (there was a power cut and I ended up with soy sauce in my coat pocket and noodles in my handbag), then went to see Batman v Superman which was the worst thing I have ever seen with my eyes. I have had to have a large martini to recover and my ears still hurt, hours later. It was so loud and so nonsensical and it went on for approx 6 hours, which were composed of 90% explosions, 5% homo-erotic wrestling, 5% inexplicable dream sequences. I only managed about 15 minutes sleep during, which is a poor score for me (I managed 40 minutes during Spectre) because of the irregular pattern of explosions. Since the martini I have been annoying everyone/amusing myself with questions such as "but why was Kevin Costner building a wall on top of a hill?" No one could tell me anything that made any sense and in any case I was only doing it to wind them up.

On the way to the cinema we walked past Brussels' Bowie wall, which is very odd. I particularly liked this, well, it's not a tribute exactly is it: 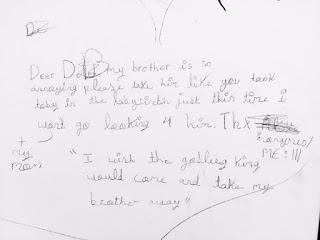 If you can't read it it reads:

"Dear DB
My brother is so annoying please take him like you took toby in the labyrinth just this time i wont go looking 4 him. Thx (illegible) ME.
"I wish the gobling king would come and take my brother away"
+ my mom"

That is all I have for you, I am going to put in some eye drops due to Batman v Superman Explosion Eye Strain and go to bed with a nice herbal tea, because I am 800 years old. Here is the dog pretending he likes me when actually he just wanted to get under my Max Mara coat because it was cold. 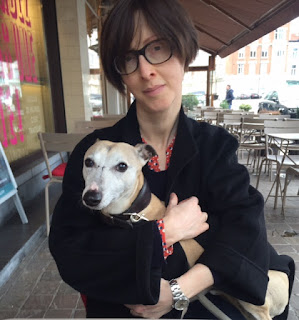 It is apparent to me from this photograph that I am the picture in Oscar's attic, he is bright eyed and youthful and I am alarmingly haggard and prematurely aged. I need a month in a Swiss clinic being transfused with the blood of virgins, or naked mole rats or something. Here's hoping 6 days in the Dales with bacon, gin and horizontal sheets of rain blowing across the valley does the trick.

I have just read your "irregular pattern of explosions" line to my husband and we can't stop laughing. Did you not read the film reviews?? Anyway, a very happy Easter to you and wishing you a good time in the Dales. PS any good book recommendations? - I have recently finished the Sheep & Goats book by Joanna Cannon and it was excellent. Best wishes, Caroline

I cannot believe you sat through that movie. Certainly you'll win some kind of parenting award.

TOO OLD FOR EGG HUNTS? My twenty year olds are still going strong!

Jane - Part of the problem is that they don't really like chocolate. Sigh.

Anon - Ha, I read the reviews (inc Camilla Long saying it was the worst film she had ever seen) but they were insistent. Hmm, books. I am not really enjoying the Portable Veblen. The Sheep/Goats thing was a very good story annoyingly larded with too many "THIS IS THE SEVENTIES" references (no one in the seventies ate THAT much Angel Delight). A couple of ok ish thrillers. Will update the reading page soon.

If it helps I decided to lighten (off-platinum ish) and managed a yellow/orange giraffe style patchy affair. Having found many wildly expensive chemicals to fix this I caught sight of myself in town with gardening/hairdye clothes on looking like a 75yrold on a really rough day, almost saw friends in town but managed to slink down an alley before being spotted (alley apparently terribly popular to dispose of needles - new high).
Now have lost most of the orange (can't see the bit left at back of my neck) looking much more ashy, with slight hint of blue at the front - fab at 18. I'm not 18.
Hoping prosecco will help, have to send info to accountants, managing to avoid by reading cookbooks - another pretence.

The illegible word in the note is 'anonymous'. Possibly a regular blog comment-leaver then.

Returning from Watches Replica a boating to Kyoto, drifted by these encounters, the places he has visited, and in amaranthine Replica Rolex Watches adventure for inspiration, Antonio Terranova (maker & artist of Cvstos) undertakes a handbag replica claimed approach, beneath the anatomy of a dedication, materialised in a watch that pays UK Replica watches admiration to the country of the ascent sun (Japan). A country formed of modernisms; Designer handbags of anachronisms symbolising.