Of course daily posting doesn't include Saturdays, that's crazy talk, who the hell looks at the Internet on Saturdays? (me)

You can have a look at my cake haul though.

I heard a rumour that the Brussels Ladurée, a strangely joyless and somewhat controversial place (it's a relatively recent arrival on the Sablon and all the chocolatiers and pâtissiers were furious it was setting up there and made Ladurée promise it would ONLY be a shop and not a tea room, of course now 6 months later 80% of the space is tearoom), was now doing Proper Cakes and not just macarons. Ladurée is the home of one of my cake fetishes, the St Honoré rose framboise, a ludicrously over the top Barbara Cartland of a cake (nb much as I respect Paris Patisserie's cake know how, I disagree with his harsh assessment of the LSHRF, mainly because there is no such thing as "extraneous Chantilly". Side note - I wonder what ever happened to Mr Paris Patisseries? One moment he was there, the next gone. I can only assume diabetes). So I went down there to check it out and of course my hopes were crushed because this is Brussels and hope crushing is a popular civic pastime. There were 2 chocolatey things that did not appeal even slightly, a lemon tart, a raspberry and passionfruit tart, doubtless a fine thing but not at all what I had in mind, and two varieties of millefeuille.

In the interest of not leaving empty-handed and also greed, I got a vanilla one: 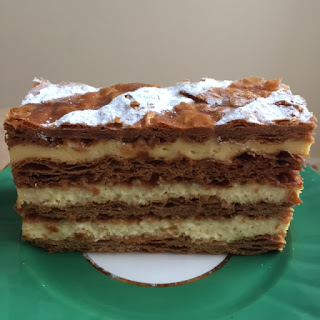 I mean, you know. It looks ok. Not awful. 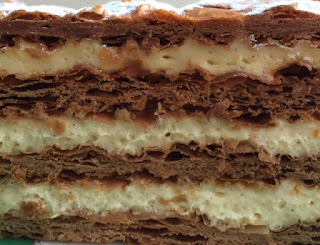 In any case, I felt deflated and had to go and reinflate myself at La Fleur du Pain with their trusty, not entirely aesthetic but fully delicious, religieuses: 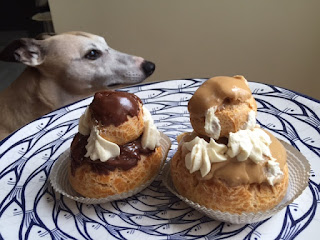 I love how mine, the coffee one, is about twice the size of the feeble chocolate one. QUITE CORRECT. I think I can actually feel my pancreas screaming in anticipation.

In other news we spent much of the morning trying to find ways of containing Pepper the Evil Quail Hen, none of which have been remotely successful. She is currently seated in one of the vast craters she has excavated, surrounded by the shredded cadavers of all my plants, preening and eating the bits of her feathers we trimmed. She's the Donald Trump of poultry, as stupid as she is invincible.

The Donald Trump of poultry! That is the only Trump joke that has actually made me laugh ever. I think you should run for President.. Rachel

Mmm I want all of the cake.

My friends used electric fence to contain their spaniel, whose escapes ended up as killing sprees, so they were desperate. It is apparently humane and of course legal, but not sure how practical with regards to hens, not dogs.