Let me tell you briefly about my leaving the house adventures, since I write enough boring shit where I haven't left the house and just expend 500 words complaining about saxophone neighbour and the pets (all of these still annoying me, yes).

So I went to London to do a couple of book things. This trip was the first time I had to do anything officially book related, other than be marched around London in 2014 like a not-exactly-prize-winning pony to have my teeth looked at and fetlocks checked and mainly found wanting by publishers. I was nervous. I still feel weird about the whole business, apparently, which is convenient as publication date gallops towards us like an escaped chicken who has heard the back door opening. I workshopped my outfit extensively with M and B, both of whom insisted I wore a dress I couldn't breathe in. YEAH THANKS, GUYS. Oxygen is optional. I tried to eat a scone wearing the dress before the first event and thought I might end up causing a scene in Pain Quotidien. It sort of resolved when I stood up, but only partially. 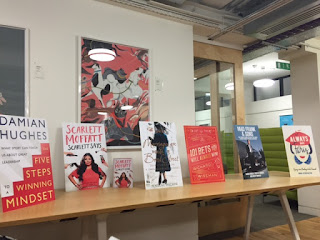 Sports/business mash up, Scarlett from Gogglebox (sadly delayed on a train and not present, though also this was sort of a relief because I would have been even more intimidated to talk in front of her), tales of a 1940s matrimonial agency, Mad Frank and Sons ("the untold story of one of the most feared crime families in Britain"), 101 Bets You Will Always Win and, er, me.

Good: Pancakes. Did not disgrace self entirely, speech-wise, apparently (god, I am bad at it though and was clutching little scraps of highlighted paper to crush any semblance of spontaneity). Everyone I met was kind and funny and encouraging. The man who did magic tricks was brilliant. One of Mad Frank's sons stroked my face and told me I was lovely. Wore my beloved croissant brooch which was much admired.

Bad: MFF's son proposed marriage to another attendee, so apparently I was nothing special. Left loo door open by mistake (wasn't ON loo, doing make up, but still) and someone walked in on me, then later was presented to Managing Director when I had very wet hands having just washed them and had to shake his, like some kind of ... seal? I don't know. A bad thing. Proffering a gross, wet flipper.

Ugly: On reflection probably had one glass (two glasses) of wine too many.

Good: Other authors (not the Day 1 team) delightful and funny. Booksellers also delightful, kind and interested in or feigned interest in inarticulate muttering.

Bad:
- Had to give speech in gap between two tables and revolve like rotisserie chicken to see everyone, somewhat detracting from speech delivery (never my strongest point).
- During speech someone upstairs had apparently decided to teach an elephant CrossFit class.
- Slightly hungover from glass (es) of wine too many previous day and not sparkling conversationalist.
- Started random conversation about how shit bras are when slightly drunk.
- No one understood Corbeau et Renard brooch

Got sick, went home, spent rest of day/week watching Grey's Anatomy and eating religieuses, basically (God, I miss Yang. It's not the same without her).

Now my family are back from half term and I can no longer lie around eating religieuses and watching medical dramas and must do Chinese revision and chivvying and watch stuff where things explode and Tom Cruise runs around self-importantly showing not the slightest trace of humour, whilst my PayPal account is drained by mysterious gaming-related sources. It's a good thing really (well, not the PayPal) - I like being on my own and the house ends up all pristine and lovely, but I swiftly become really quite neurotic and weird and plan out every second of my time and talk myself fussily through my self-imposed timetable, task by task. I certainly do not enter a white hot zone of creativity and write half a novel, which is a shame.


20% Back to usual role as tedious child-nag
20% Hen-rage
10% Unease
10% Itchy chin
10% Listlessness
10% Annoying cough
5% Strepsils
5% Marcolini sugar-free chocolate, I'm not really sure what I thought I was achieving buying that, guess what, the kind with sugar is nicer
5% Stale scone
5% Woolly hat

50% half term stress. 50% pent up fury at stupidity of work rules which my team rightly ignore but I am now being harangued to make them follow otherwise risking being in box of doom in 9 box grid of civil service stupidity.

Sorry about the hen rage, I thought they were supposed to make you a happy laid-back earth mother. Maybe they're faulty? Is that your very own elephant shrew? I felt a bit as though I was looking in a mirror. Well done on the book publicity tour and the speeches. I would die of fright. Wouldn't mind a look at the nautical bondage themed bar though. They really do go all out in Cardiff, I've had a night or two out there myself, very memorable. CJ xx

My dvd of Cold Comfort Farm has arrived, must watch soon.

Mybug:
We met in London.

Beleef de Lente has gone online again, in case you haven't noticed. Disappointingly, the kestrels do not feature this year. But the peregrines are there, and three types of owls, so it should be well worth watching. The tawny owl might lay its first egg soon, and then after a while there will be owl chicks, yay.

Morelle - I CANNOT WAIT. There goes my non-existent productivity, eh.

CJ - I'm pretty sure there are Ways of dealing with a defective hen.

Crazy Mom - Oh god, I might have to get it too.

I miss Yang, too. I am also pining for the 2nd season of The Affair.
When I came home last Friday, I caught husband watching a Tom Cruise film yet again, so I can totally relate.
Are you doing any more book events?

When does your book come out? I need to preorder it :)

I like Yang but can't get past the fact that the other chap - I think they are 'dating' is Poseidon from Percy Jackson - talk about dichotomy of Modern Life.

Ver exciting stuff about the book - many congrats and look forward to reading...

your book is coming out on my birthday (also, queen elizabeth's birthday, fyi). this is all the present i require. i have already made my list.

Crikey I was in Cardiff that day too. Different gig tho, went to see Bob Mould. Moshed.
Sorry about the hedgehog.

Ms Waffle...the brooches, wonderful, why have you not mentioned them before? Are they only mail order or available here in Bruxelles?? Yours hoping for shopping in Belgium.

Anon - You know Rose on Rue de l'Aqueduc? They have some there, but not all of them...

No...I gave up trying to shop in Brussels some years ago (excepting cake and wooden toy shops of course, but as my own small people are now less small and more enormous, I don't do that very often), and largely confine myself to Etsy :) But those brooches are gorgeous....they might tempt me back out there

It was very sad Ms Waffle.. I could not wait.. I have sent them an order through the ether.. I hope my cloud and rainbow will be with me soon.. thank you so much for the tip :)

THis book writing is tres exciting. I have every intention of writing a book but in the words of Stevem Wright, I've got the page numbers done.

I'm catching up, can you tell? I've also decided to stop lurking and start commenting. You're welcome.

Take every chance you get in life, because some things only happen once
cara menghilangkan endapan lemak di kelopak mata

very interesting information, I really like it because it can add insight for me more broadly, thank you very much for this extraordinary information
cara alternatif menghilangkan benjolan lunak di belakang telinga tanpa operasi,