Shit, I have got into that state of mind where I haven't posted for ages so feel as if what I do post must be perfectly judged and hilarious, but my brain is as lively as cold gruel, so let's just get over that right now with some mundane thoughts in no particular order and hopefully move on to better things (ha). NB, I have updated my reading up to end December, so there are some muttered haiku length book reviews over there. I will start a new 2016 page soon.

January is doing its thing. The streets are thick with pine needles and the back yard looks like Passchendaele. It is raining so heavily the dog is refusing to go out for its constitutional. Following the demise of one of our hens while we were away we have a new hen who looks rightly horrified at her new quarters and spends most of her time huddling behind the lilac radiating disapproval. F has called her "Pepper" (joining Tabasco and replacing the deceased Chili) which has the unfortunate side effect of me assuming she must have a Gwyneth Paltrow type personality and I can assure you her living quarters are not remotely Goop approved. I feel like I should bring her a bruised kale salad and offer her some vaginal steaming. Cloacal steaming? THIS IS GOING DOWNHILL RAPIDLY.

I had some sleep, finally and I feel more like a person, albeit not with the smug, 2 weeks of sunshine and all the papaya and passion fruit you can swallow glow I was aiming for. It has been a great relief to sleep through the night occasionally, even if I do seem prone to florid dreams of bad sex and sacks of woodchips, not least because I no longer need to go through my various sleep routines at 4am, eg:

- think of every meal we ate in Thailand (monstrously counter-productive, due to NIGHT STARVATION)

- develop intricate scenarios for how a range of catastrophes, humiliations and failures will befall me over the next 30 (ditto)

Do you have a good thought-calming exercise for sleepless nights? Are they just a vain and ineffective distraction from what always ends up in sweaty contemplation of mortality? I fear I know the answer.

I have now reverted to my usual routine of lackadaisical prone toothbrushing, reading/dozing until my Kindle falls heavily onto my face causing me to wake with a start, then sleeping the dream-infested sleep of the not-exactly-just until 7. Amen, let me never leave Europe again (at least not without the promise of water buffalo).

Terrible (Minor) Things Which Have Happened:

1. Oldest son turning to me on aeroplane and saying "are women allowed to be pilots?" NO SON, OUR TINY HANDS AND UTERUSES GET IN THE WAY AND WE ARE DISTRACTED BY THE SHINY LIGHTS.

2. Saxophone neighbour returned from wherever it is he has been "jamming" (ugh) with a renewed zest for life, Jupiler and noodling riffs on Dido.

3. Newspaper headlines declare lack of a social life as bad for health as smoking, so I might as well just buy a nice cheap pine coffin now and lie down in it and wait.


Things I Have Bought That Make It All Better: 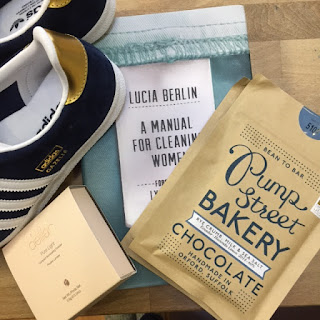 1. This chocolate is amazing. I have nearly finished it and am getting twitchy about sourcing replacements.

2. The face powder is of course a St India of Knight recommendation. As previously stated I would buy anything that woman recommends. It does appear to give me the appearance of being a human woman rather than a walking column of porridge and thus I now add my entirely meaningless endorsement to hers.

3. I saw a woman wearing these shoes on the street and hunted them down. I have not been able to wear them because it has rained solidly since they arrived, but I look at them and they please me. They are OF COURSE now half-price.

4. Not pictured, but I have also bought myself this most wonderful book about Velasquez (extract here)

5. Actually the Lucia Berlin was a gift not a purchase but it is definitely making things better. Even more so, actually.

6. An M and S apple turnover which I will be eating shortly in greedy silence, pastry flakes falling down my front and nestling in my grubby cashmere. This will doubtless prove to be the high point of the day.

80% Wishing I was at the breakfast buffet at our hotel in Bangkok where you could get the most delicious chili studded rotis and dahl for breakfast (as well as a gazillion other delights) and where the buffet was watched over by A MAN WITH A FALCON, to scare pigeons away. A falcon. For my breakfast pleasure. A Falcon At the Breakfast Buffet sounds like the title of a memoir by someone far more glamorous than me. #lifegoals

20% Irregular verbs (it is my Dutch exam today, our teacher does not seem to hold out much hope for us, our brains are gebroken).

A walking column of porridge! This is an excellent phrase. I think we maybe twins. BBx

Except for ... hang on ... you're NOT a walking column of porridge because St. India of Knight saved you. I should try and save my self, but I can't be arsed.

BB - It's too far to go upstairs to put on the powder this morning, so I have reverted to porridge column. *high fives you*

*High fives you back* ... SPLATCH! Nnnggh ... now I have porridge all over my furry blanket. Oh well.

Me:
50% quite fucking cold, actually, for the first time this winter
25% bloody tempted to go back to bed with a good book - or, frankly, a bad one - until the heating comes back on
5% guiltily aware that I should re-pack the Christmas box to fit in the wrapping stuff I've just come across, but almost certainly won't
10% startled by the hangover I appear to have from drinking apparently too much at 42, though it was just a normal Wednesday ...
10% very, very envious of those Adidas Gazelles.

If only my dog didn't want to go out in bad weather. He likes to go out and do NOTHING AT ALL, IN THE PISSING RAIN, ALMOST EVERY TIME. The little fucker.

The dog ran back into the house last night, in the face of the cold, cold rain. Lead on, coat on, and still he ran back in.

Have you tried the archive of 'This American Life'? The lovely voice of Ira Glass is so soothing (mmmmm) and the distraction of the stories means I fall asleep every time (and end up having to relisten, but hardly a life pain)

To get back to sleep when awake during a useless portion of the night, I like to imagine laying back in a punt and snoozing while someone else directs it gently through shade and sun dappled calm waters.

Life saving mid-life return to sleep discovery: 4-7-8 breathing. The only thing that has worked to eliminate lifelong racing brain. Breathe in to count of 4, hold to count of 7, breathe out to count of 8 (that's the key right there). It seems hokey but it actually works...why everyone in the world has not been taught this is a mystery to me...some kind of cruel joke. Best of luck with sleep!

Kim - Ugh, I've tried the 4-7-8 over and over again. Doesn't work for me. Well, sort of works. Gets me slightly calmer but never gets me back to sleep...

M&S do a cheese pretzel thing which is a dream of salt, fat and grease. Oh how I wish I had one now. If a lack of social life is going to kill me I may as well go out in a carb-induced stupour. It is strangely comforting to know that I am not the only one lying awake at night going quietly bananas. I try and imagine myself in a beautiful Italian vegetable garden overlooking the sea. This might not work for everyone, I fear you may have to be vegetable obsessed. I gasped a little when I read about the falcon at the breakfast buffet. It is a life of impossible glamour that you are living. Around here it is every man for himself at meal times. The family motto is eat or be eaten. CJ xx

For sleep I imagine that a nurse shows up and injects me with a quick-acting narcotic drug, which makes me feel heavy and immovable. Sometimes I can fool myself into the placebo effect.

Even though I wrote on our communal chalkboard like ten minutes ago that Sai Baba quote about not saying anything unkind, unnecessary or anything that will not improve upon the silence...... I F@CKING HATE dido.

20% Under the distinct impression that interaction with people is killing me, actually.

20% Reading biography of Proust's mom, not making me feel one bit better about excessive emotion or druthers.

20% Fairly certain that two small hits of dope get one back to sleep in the middle of the night like clockwork (with no side effects, but it will not cure jetlag, and Highsmith is not a good name for a coffee shop).

20% Having second thoughts about new tattoos, 'Foreign National' in large script down one forearm, and 'Is that a problem?' in large script up the other. Maybe I should have gone with my first choice, 'I'm a pilot!'

20% Working on my impression of a cormorant drying its wings.

Mentally saying the alphabet backwards works for me but I love the injection/placebo idea!

I am in a SHIT mood and REALLY EFFIN HATING MY HUSBAND RIGHT NOW so your blog has brought me some much needed light relief. Merci!

My thought calming exercise is: think through all the ingredients in piccalilli. If I get to the end, repeat. Usually only takes twice through it to work.

Where did you get them with gold at the back please? I've always wanted what I have called in my mind "Freddie Mercury shoes" and these would be perfect!

Renia - Sorry, sorry this is probably too late but I got mine from the glamorous JD Sports. They had them in lots of places but it's a question of finding your size...

Thank you! I'm still looking but as I'm in Perth Australia which is retail wilderness :(