Argh, this has taken me ages, I've had to change the tense of several things. I have a lot of work on at the moment, but it's ok because I have taken EXCELLENT NOTES: 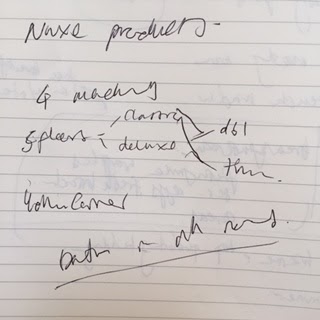 Bad behaviour
I was a complete harpy all weekend. I could probably attempt a tenuous argument that it was to do with coming back from London...

(London: joyful lunch with NonWorkingMonkey, the first in four years, holding my actual book - well, absent the late adjustments so I don't have to pay Universal Music €€€€€ -  in my actual terrified hands, drunken evening with Papa Waffle and stepmother, starting with champagne cocktail in Rules - delicious, the kind with a sugar lump in the bottom, I wish my life featured more champagne cocktails - and ending with a tipsy 94 bus ride home, exclaiming at all the lights like simpletons, tea with Mrs Trefusis who had brought my circuitously acquired replacement for my favourite mug and acquisition of long-lusted over Charlotte Tilbury snake oil)


...and having to deal with the usual domestic dysphoria, work, exam revision, teenage bollocks, endless expense, seasonal anxiety, the antics of BASTARDPOST*, etc. but the truth is it was just my horrible personality/a further attack of AMAW syndrome. I went to bed feeling very bad about myself and apologised to L, who bore the brunt of it, yesterday. If Père Fouettard dealt with adults, I would be in a sack being kicked to Spain right now.

Drinking injuries
I thought I was on fine, functioning form after my evening with les P-Waffle until I tried to clean my teeth and completely missed them, jabbing the toothbrush with extreme force into my gum. It is still monstrously sore three days later, what the hell did I do, what did I think was going on in there?

Christmas lacunae
Bleh, pretty much everything. I tried to do some child shopping in London but after a short, panicky scuttle round Top Man and Vans I ended up sweaty, bug eyed and empty handed. The sum total of my purchases is: a teatowel (don't know who for), a pigeon brooch (ditto) about four weird and disgusting sweets from Cybercandy and some fancy sellotape (it's BRONZE). I'm feeling a bit semi-detached from the whole business due to not being around, but this does not absolve me from normal Christmas duties, so what we have here currently is a disaster in waiting. Outstanding in the mail: a plastic snake skeleton and Extraordinary Chickens 2016 see the BASTARDPOST addendum below. Non-Working Monkey's advice was to get everyone a goat (or a rat? Like Sir John, my father's rat? I got a text from him - that read "I see Sir John has opened his eyes but is staying close to his mother for comfort. Can't say I blame him") and it might well come to that**.

"May your year be blessed by Christ's umbilical cord, a vial of Mary's breastmilk, splinters of the True Cross, an arm of the Apostle James, a tooth of St Lawrence, part of the head of St Mark, a finger of St Thomas and a swatch of the towel used by Jesus at the Last Supper."
(We have a Thing for relics)

And a late birthday parcel of joy: 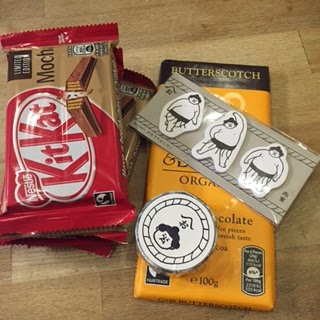 Look at that! The round thing is SUMO SELLOTAPE. I am going to have the best adhesive-d presents in Western Europe, assuming I manage to acquire some.


Stuff I want to remember to write about
Female American podcast stylings
Dutch class (even though they theoretically know that ik heb een blog, I can't imagine any of them have the slightest inclination to read it)
Noises made by my younger son 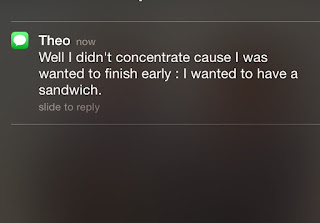 Good reason. The best reason. I'm now planning to use this for all the things I don't want to do (currently pretty much everything).

5% Remorse
95% Edward Elgar with a chicken on his head.


*BASTARDPOST have lost - lost! - Extraordinary Chickens 2016 and are completely unrepentant about it. I called the BASTARDPOST helpline and they told me to go back to the BASTARDPOST bureau and tell them they definitely did have my parcel and they need to look harder, which doesn't at all sound like a hiding to nothing, nope.

**UPDATE: Another email from my father this morning: Sir John has begun click training. "At first Sir John's trainer will immediately sound the click and deliver the food." Irresistible.
Posted by Waffle at 10:43

My shopping is done but wrapping will be substandard due to crappy ordinary tape.

Looking as hard as I can. Bone tired from looking. May need to work for Belgian post.

Here's some language encouragement, it's in your blood.
https://www.youtube.com/watch?v=wBIl9nBqbp8

oh lordy, xmas present despair here. why is december so cruelly short? it needs to be at least 8 weeks long to get everything done... also pile of xmas cards sits glaring reproachfully at me. i expect i will write most, then not get around to posting and they will glare all the more guilt-inducingly in january, until i throw them swiftly away...

Like Rosie I also read 'spleen' as one of the few decipherable words. So looking forward to your post on same. Maybe relates to AMAW rather than actual organ?

Rosie If you're going to get a spleen, you should always get the best quality you can afford, so I think deluxe. I'm so glad we've cleared that up.

10% giddiness at finishing grading of final exams and papers
10% list-making of things to pack in car to take back to 'real home'
40% confusion as to what was actually learned by dear students, based on said exams and papers
40% annoyance and stabby rage at the minority of students whining that they 'deserve' a better grade. (I cannot imagine ever asking any of my professors to raise my grade--clearly I am of a different generation)
bonus 5% of envy at mocha kit-kat as well.

The article you share enough to help me in searching for assignment related information, thank you for the information.
run3.me
Basketballlegendsgame.com

These days its utilization isn't just restricted to the standard store and withdrawal purposes yet in addition for payrolls, business advances and even bill installments. Check Cashing

Those are the most prevalent ticket sites, you presumably know their identity. We need you to realize that those same tickets are on 1500 different sites. ticket affiliate program

This article clears my mind. Writer has done great job. Best thing about this blog is its simplicity. Thank you so much. Keep posting

Love your post! Thank you for sharing.
gmail login mail