My younger son spent the weekend reading us all ‘would you rather’ questions off some website he has found. It is very American, e.g..

Work at the FBI or the CIA?

Most of them however are about burping or farting at inopportune moments or whether it is better to have too many testicles or one huge one, which is what happens when 12 year olds get access to the Internet, I suppose. We are in broad agreement about most of the dilemmas (uncontrollable ear hair easier to hide than uncontrollable nose hair, for example), which is reassuring.

E: Please will you get dressed

F: Would you rather snort one crushed up Altoid Mint or take a shot of Tabasco?

E: I’d rather you got dressed.

(faint sound drifts down from upstairs) F: Eat your own hand or a loved one’s eyeball?

(own hand obviously, eyeballs are disgusting and not even very nourishing and imagine the atmosphere if you ate someone's eyeball, awkward)


I tried to do some domestic things this weekend, an activity doomed to failure which always ends up with tantrums (me), mess (house) and tooth grinding (also me). First, we melted down some … stuff to refill a coconut for the garden that the giant hooligan crows have emptied in 2 days flat. God only knows at was in it, possibly rendered whale blubber or some kind of boiled down bones, human flesh even, it filled the kitchen with the horrifying stench of death then hardened to spooky, glistening perfection. Not a single bird has gone anywhere near it since we hung it out. Also, the garden looks like the Somme-slash-blasted heath, this is not related to anything except the destructive force of chickens + Belgian weather, but it is quite depressing: 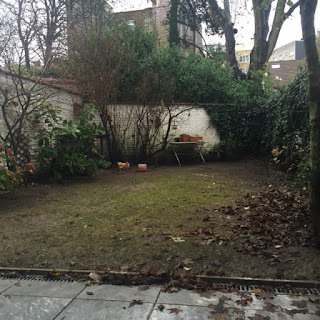 Later we marinaded piri piri chicken from Diana Henry’s wonderful A Bird in the Hand cookbook. I got this book recently after wild rave reviews from all the good cooks I know and this was the first thing I made and now the children are refusing to let me try anything else because they are children, which is annoying. Anyway, I spilled piri piri marinade all over my slipper and it has a huge greasy stain on it, which is proving impossible to remove and now I hate everything.
Kirstie Allsopp rating 2/5

Made chocolate muffins. I can’t be doing with homemade muffins, they always turn out bland and boring and get stale after approx 4 minutes, but F was keen for some reason. They look ok (recipe from that Hummingbird Bakery book that was notorious for having inaccurate recipes in it, so every time I use it I expect disaster) but took ages and don’t taste of much and I got resentful about having to make dinner afterwards, why can’t we all just eat the boring muffins, hmmm.
Kirstie Allsopp rating: 1.75 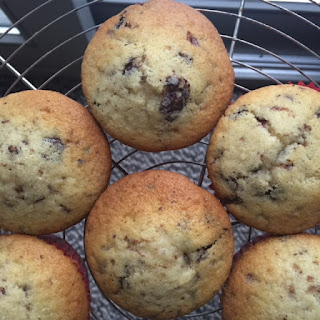 Erm. I thought there were more things, but these are in fact all I can remember, my Friday attempt at a sloe gin cocktail must be consigned to the mists of history without a rating due to Awfulness. Today I will drag the matchbox advent calendar out of the dead wasp filled cupboard and fill it with tiny match sized blandishments, so that will up my KA score to at least 2.5, I hope.

Percentages:
20% Dutch test revision
20% Behind on everything end of year related
20% Punishment soup
20% Feeble body brushing like that will make a difference
20% Delighted and horrified at the return of the Egg Master.


You? Eyeball or hand? Chuck Norris or Old Spice Guy?
Posted by Waffle at 12:09

Those questions are known as the 'ham or cheese?' cycle in my household - excellent.

Oh, how your blog makes me smile. Definitely hand though, the thought of eyeballs bursting in the mouth doesn't bear thinking about!

I love your garden. One day I am coming over to sip gin in it with a whippet head on my lap and a chicken on one shoulder. Which isn't supposed to sound like a threat.

Jane - This is also my dream. COME COME.

Oh no, not the eyeball. Definitely not the eyeball. But I will take a shot of tabasco. I made a boring cherry shortbread at the weekend which everyone said would taste better with chocolate chunks, or cranberries and nuts or something else. I shall eat it all myself, that will show them. CJ xx

Have you SEEN the Old Spice Guy?!
No contest.

Blackbird - No. I have never seen the Old Spice Guy. I am going to google him, hang on.

I still don't want to meet either of them though. I'm bad with new people.

Are you sure naming one of your testicles King David wasn't an option?

Have discovered that magnesium bottle in the cupboard does, in fact, claim to contribute to een normale psychologische functie (apparently no one takes it).

Eyeball. I'd rather have a friend with no eyeball than to be missing one of my own personal hands. Priorities in place, as my hand knit Christmas gifts are not yet complete so I need hands.

resep peyek kacang is my blog.

Try the chocolate cinnamon banana bread from Orangette's blog. She got it from Kickpleat, who writes Everbody Loves Sandwiches. Never made it into muffins but it's definitely not dry.

Good to know that such kind of posts are there to help ignorant and novice people.

Thanks for the awesome information.
Raaz Reboot

This is one of the cult game now, a lot of people enjoy playing them . Also you can refer to the game :
gold mine strike | pokemon go 2
The game controls are shown just under . Movement mechanisms primarily include acceleration and tilting controls.
stickman games | stick war 2 | animal jam 2

Our Tennessee Titan Flag is constructed of polyester, measures 3x5 feet, and has two plastic D-rings for attaching to our 6' aluminum flagpole or tailgate pole. The perimeter of our Tennessee Titan Flag is double stitched and the Tennessee Titan team logos are dye sublimated into the flag so they won't peel. Due to its large size, these flags are also perfect to hang on any wall in your game room, sports room, or office.
nfl flags wholesale
nfl house divided flagsCincinnati Bengals house flags
Packers stars and stripes flags

Thanks for sharing this information with us, i always like to read these articles, cool..!
24JobsExam website
Check 24JobsExam links

Payments that are made from playing video games NBA2K18 Upgrade Badges and Sign Contract with your players.

This is the very best internet site to download your favorite Tubidy for Android Download Tubidy application is an exceptional audio/video downloader.

Today, getting the money for checks just requires a couple of minutes of self-benefit from intuitive registration booths.Check Cashing