If I waited until I had something interesting to say to update my weblog, we would be here for years, so here I am.

I have just come back from delivering a slow painful death by legal powerpoint to some people. I got home and crammed three choux à la crème in my mouth in quick succession and now I feel more human. But also remorseful. Fat, incompetent, remorseful, but human. I'll settle for that.

My main preoccupation today is Sven the Luxembourgeois capybara "free to a good home". I am pretty sure I could be a good home. I have an enormous bath and well, ok, our track record on rodents isn't stellar (my search history may contain some variants on "how to humanely home euthanise a rat", but it was with the rat's best interests at heart) but surely it is meant to be? A capybara? Free? In LUXEMBOURG?

Now my main preoccupation is Bismarck who we are babysitting. This is Bismarck: 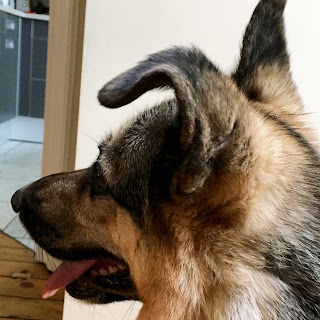 He is a sweetie, soft and cuddly and playful (= the anti-Oscar), but SUCH a heavy breather. It's like having a pervert sitting next to my chair all day making sex noises. As soon as his fevered panting calms, I spoil it by getting up and eg. going to the loo or making a cup of tea and he has to follow me round anxiously, hyperventilating. When I open the fridge he comes to stand next to me and look in at the contents, rolling his eyes and panting. He could become quite an effective diet aid actually. Oscar is sitting in a corner glaring at both of us disgustedly. He has also stolen Bismarck's bed tonight, the arsehole: 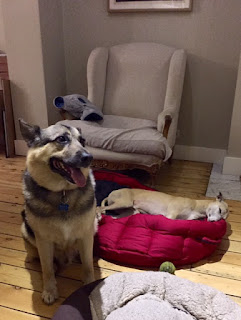 The chickens are also behaving like dicks, pretending to be frightened of Bismarck who is then terrified of their loud chickens-being-dicks noises. The tortoises keep coming into the house to steal dog food, causing further confusion. As usual, the only well-behaved one in the household is the hedgehog who has the good grace (a) to be nocturnal and (b) to keep itself to itself. Ok, fine, maybe I shouldn't get a capybara. Bismarck has now stationed himself by the front door and is waiting to be rescued, whimpering lightly. His owners aren't back for 2 days, and there's an insane thunderstorm brewing over Brussels. Poor Bismarck, I think he might have a heart attack. I need one of those plug-ins full of Valium they advertise during Supervet (incidentally, when are they going to invent those for humans? Surely this is overdue).

I have spent the day with M who is in Belgium for the week and it was brilliant. Belgium is an unseasonal 31°C so we have mainly hidden in the shade and eaten stuff. We have eaten choux and superior Pierre Marcolini Mr Whippy ice cream, drunk several pints of lemonade and laughed ourselves sick at the hideous treasures in the flea market (M's Instagram will reveal several of them to you, including the worst pictorial representation of a shark in art history. Is it a shark? A flat fish? A creature from a nightmare? Who the fuck even knows). We have also discussed our career indecision and decided to revive Old School Facegoop, the pre-Guardian version where we were unreservedly rude about stuff. This means I need to source some cosmetics to be rude about, or even like. Has anyone used anything excellent or indeed terrible recently? As you know, I have become a sordid hermit in recent months and personal grooming is a foreign language for me, but I am on the verge of succumbing to the siren lure of a very expensive hammam mit as recommended on St India of Knight's website. That woman could sell me anything.

Time to go, I have a hyperventilating dog to calm.

35% delicious, awful sugar and choux overdose
20% head sweat
20% Perpetual Paypal mule for children's ridiculous purchases (spitballs, jelly beans, miniature Rubik's cubes)
20% watching Koh Lanta out of one eye and feeling extreme scorn at its feebleness compared to Bear Gryll's brutal island.
5% irritation at my childrens' method of watching Koh Lanta (and indeed anything on telly), which involves constant commentary-slash-argument. Dear lord, can we not all stare at the screen in silence in the time honoured manner of our people? Is nothing sacred? HUSH NOW and watch the well-fed French people argue on the desert island.

I am currently running an unrandomised uncontrolled test on Nivea q10 body oil, which promises to firm up my skin. Frankly it's got a challenge ahead of it when you consider my thighs. I would be very interested to hear your views on it, and it's only £7 or so.
Margot Leadbetter

The sex pervert dog made me snort. Does he jam his head in your crotch too?

Talk to me about dog valium. Do you for example think it could be inserted into a sausage and thrown over a fence? I'm starting to formulate a plan. Re the capybara, I have a saying, "If it's free, it's for me". Worry about the details later, snap it up while you have the chance. They have such supercilious expressions, it would be worth it just for that. And when will you ever get another such chance? Don't let it get away. CJ xx

It is a pleasure to read your posts again. Welcome back.

45% Enjoyment of man-made-natural feature. Unlike the provincial mindset, it gets better by the day. No doubt destined to end up on the UNESCO Pearls Before Swine list.

15% Teenagers and preteens, of all species. No one is taking a Chinese exam though, but there's plenty of zit popping in Vespa mirrors. We're betting on manual dexterity as a life skill up here.

15% JC getting me through the day. Don't know what I would do without José Cuervo. Not proselytizing, just saying.

25% Sculpting with two-part wood rot filler. It's not my passion, I just dabble (as it's apparently endless and inescapable).

I'm guessing your boys have gathered an array of little tubes for spitballs. Do not show them how to scotch tape a small paper cone so that it flares out from the non-business end of a pushpin--because when you add this to a piece of PVC you've got something, if not exactly lethal, certainly aerodynamic.

The author of The Rise of the Dutch Republic was friends with Bismarck in college, and included him in a novel. Now I'm kind of tempted to see how it compares with your description.

You have a hedgehog?!
My current fave product is Garnier Micellar water which would be cool if i'd found it in a French chemist's but I didn't, you can buy it in Sainsburys, so not chic at all but incredible for lazy skin care. Takes everything off in one fell cottonwool swipe.
Sara (WEM)
x

I know I said it on your last post, but I'm so glad you're blogging again.

You made me laugh out loud. I don't think I could live with Bismarck though

My recent make up and skincare discoveries: 1) Collection Concealer from Boots, which is under a fiver, but does a job of one costing £25. No wonder it is often sold out. 2) Pixi toner (yes, I know toners are passé, but this one is a hit), with glycolic acid, really sloughs off dead skin 3) Eyeko eyeliners, not a recent discovery, but still firm favourites 4) Marc Jacobs make up and nail polish - almost impossible to get hold of in the UK, but a friends from the US supplied some, and it is v. high quality, though not cheap 5) Fresh ltinted lip balm - again, Fresh is hard to find here, but this balm is the bees' knees for chapped lips, if you are still looking for something to soothe yours and don't mind a bit of colour, I highly recommend it 6) DHC powder blush is unexpectedly excellent, even if you prefer cream blush (as I do), it is cheaper than Chanel etc, but v. similar quality.

I suspect your head sweat is condensed dog breath so don't worry too much about it.

Margot - I have purchased the oil! Report to follow.

Frau A - I HAVE MISSED YOU.

Anna Maria - These are all excellent recommendations and I now I want Marc Jacob's cosmetics.

Rebekah - This is totes reassuring.

After an hour or so at the garden, we jumped into a cab to go back to our riad…we chose a freezing day to visit the garden, and were definitely not dressed appropriately for the chilly weather

Thank you for this post. If your dog is asking for more activity than you can offer and likes to compensate by digging holes in your back yard and howling at the moon at night, you might be dealing with a hyperactive dog. This means that he has A LOT of energy that he needs to direct somewhere. See more http://dogsaholic.com/training/how-to-calm-a-hyper-dog.html

The blog or and best that is extremely useful to keep I can share the ideas of the future as this is really what I was looking for, I am very comfortable and pleased to come here. Thank you very much.