Is that how it goes? I shout at you in incoherent capitals? I can't remember. Here, have a nice picture of a man and a horse I saw in the middle of Ghent on Sunday: 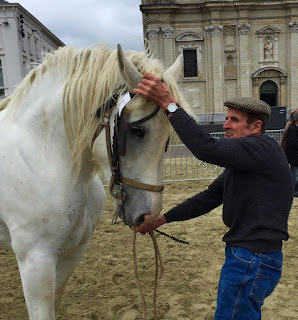 (We were escorting F to his Chinese exam and on the square outside was some kind of heavy horse ... thing. In the middle of Ghent. With almost no one watching or seeming in the least bit bemused to see 30 Shire horses. Puzzling)

I have finished! Well, I have handed in my best Grey's Anatomy and angst-fuelled effort and can only hope that it isn't rejected out of hand as a pile of shite or that the travails of Christina Yang haven't crept in there. I can't pretend that scenario hasn't crossed my mind. When it does, I generally embroider some comforting fantasy involving moving to a remote goat-filled region, having a remote goat-filled smallholding and withdrawing entirely from the world. I don't know what makes me think I'd be qualified to look after goats, but they don't look too fragile, do they? I bet they're easier to look after than eg. tortoises. We lost a tortoise to gout recently, which was very sad. Gout! What the fuck, they only eat green things not Stilton and drink no port whatsoever.

Anyway. I have finished. My mantra in times of doubt and in times of remembering the shit bits I never quite managed to make work has been and continues to be "there are worse books in the world than this one" and I will continue to whisper it to myself in weak moments. Now what? I can't remember what I used to do and have mislaid several of my former jobs. I am at a slight loose end currently, waiting to hear whether my quote on a massive translation job has been accepted, so here I am, trying to update my weblog, but I have forgotten how that goes too. I can't possibly make it entertaining enough for a three month absence, so I'm going for writing any old thing. I mean, I'm pretty sure that's what I used to do.

Things I promised myself I would do when I finished:

- buy new clothes including trousers with functioning buttons/zips (I am currently dressed like Compo from Last of the Summer Wine) and new bras since I have been wearing the same M and S minimiser for approx 4 years.

- lose half a stone

- do lots of cultural stuff

- find new work to replace all the jobs I lost during book writing hiatus, ideally ones where I leave the house

- Generally SORT MY LIFE OUT and work out what to do next in this world of no financially viable jobs for useless, cowardly forty year olds with no transferable skills, no pressure yeah.


Things I have done: bought some cheap (but pleasing) jeans, been to see a Hungarian violinist who looks like Balzac (excellent), watched 780 episodes of Ru Paul's Drag Race, made a dentist's appointment (ok, it is for a child, not me, hush now), succumbed to a heavy cold and barely left the house and bought a large box of choux buns. Baby steps.


What would you do if you were suddenly at a temporary (I hope) loose end? Should I tackle the Attic of Shite Paperwork and Other Unspeakable Detritus? Start writing a novel? Play bad piano? Lie in bed watching more Ru Paul? Go to a Belgian folklore festival of some kind (there's always one on offer)?

I will certainly continue updating my weblog (better than this, I hope). I need to tell you about the epoch defining opening of le Marks et Spencer de Bruxelles, for one thing. We also went to Scotland, my eldest child turned thirteen, we saw the Belgian pandas in the flesh in daylight, stroked an aardvark, watched a proper film being filmed at the grumpy hairdresser's in our street and attended a GOOSE PARADE. I can definitely get back into this blog type thing, I just need to remember how to write without second guessing and endlessly revising my every word, then still hating them all, then grinding my face into my own desk until I have post-its stuck all over my forehead then giving up and watching Grey's Anatomy and eating terrible foods and worrying at my spots. Wehey!

35% mass of Contagion-style snotty corruption
25% choux
20% memories of the worst ramen in the history of ramen from this lunchtime oh god the vinegar mushrooms of evil, make it stop
10% awful blog post shame
5% tedious policing of my child's internet usage/phone smuggling/etc.
5% end of owl webcam sadness, but no! The steenuils are still out there giving us feathery realness.

It's good to be back.

Good to have you back, I'm sure you'll have another long truc commissioned very soon. BUT! Until then, rejoice! I certainly do!

I'm deep into year two of my blog hiatus (with a few half-assed exceptions). If nothing else, that means there are worse *people* than you in the world as well.

Delighted you're back and looking forward to your book.

Hurray,good to have you back and to know that your book is in the pipeline, exciting.

Well hello stranger! Welcome back. It'll all be fine, of course. Good to see you here again.

Hooray!! So glad you are back.

Thank the stars you're back.

I'm glad you're back, and especially interested in the aardvark.

And it's good to have you back. Every day when I sit down for lunch I click in to Belgian Waffle and TODAY I said out loud "I can't believe it!"

PS Love your book reviews. Just finished Life After Life and now on to God in Ruins.

You finished! I hope all the angels sang and there was a celestial light show at the very least. I also just finished a long translation thing and although I was thoroughly sick of it by the end, I now find myself at bit at sixes and sevens. I need a new project to keep me off the streets.

HELLO HELLO HELLO! How lovely to have you back! And you've been in my Scotland without telling me? Tsk!
And you've missed loads of my hypochondria including imaginary crabs and ringworm, concurrently.

Hooray you lovely horse lover you! Can't wait to see your book. I'm in London at an expo for IT professionals and fitting in quite nicely with my game of thrones tshirt yes indeed. My ponies are now hugely fat and sheep have had lots of lambs, some quite amazingly dim, but then maybe that's normal for sheep. Lots of love from Northumberland x

*squeeee* You're back! So lovely :) And congrats on finishing the book. Can't wait for it to come out in NZ. (I may get back to Europe before then, mind you).

PS. Love Kate Atkinson. I'll be picking up a copy of God in Ruins for next holiday.

Ah, you are all lovely.

Tigerbaps - We were miles away from civilisation, up in Kyle of Lochalsh. I had ringworm once.

Sally. More pony pictures please, I have earned them.

I missed your excellent posts! Which is all of them--hush with that self-doubt, you. Best way to cope with loose ends: throw things out. It's a simple yes/no thing and highly satisfying. Do I keep this thing? Yes/no. Have trash bag handy plus giveaway box of some kind. Oh it feels amazing.

Hooray! Welcome back. I have missed you.

Hurray! You're back, and fabulous as ever. Where do we pre-pre-order the book? J. x

Maybe I'd start writing a bad novel (on purpose bad) to get the taste of memoir out of my mouth. Space marines and the alien capybaras they encounter.
I love the curve of that draft horse's neck.

Hooray! I missed you

I stopped by today to see if anyone had heard of you dying so what a relief it is to see you haven't! Missed you.

Thirteen! What new thirteenish boy things will be mercilessly flung your way? I watch and wait. Word on the street is that it will suck badly.

clicked on the steenuils link to find the owl version of studio 54 with babies, what was that? mum owl seems quite...stuck in.

it is wrong of me to suggest you write a novel since I've only written five pages of fiction in my life and at the end of that afternoon there were no clean dishes in the house and I'd lost the car key and some shoes?, but we would all be really really grateful if you did do.

Hooray! I really missed your blog.

Waffle! How excitIng that you are back! You have been very missed

Ah, missed you Waffle….so glad to see you emerge from under the post-its and creative demands of book writing.
Ash :-)

Welcome back! My only recommendation for doing things with Spare Time is - KEEP THE HELL AWAY FROM FACEBOOK. It is the biggest time suck in my life. I love it. But it's just feeding my addiction :-D

HELLO! I'M SO DELIGHTED THAT YOU'RE BACK! (And I will buy the shit out of that book of yours once it's out; I'm sure it will be fabulous and funny and all things worth reading)

I definitely vote for your resolution to meet real people - I'm ready when you are! xxxx

Oh almighty heavenly god (that doesn't exist), 3 blog posts to catch up on!
I had despaired of you writing here again and hadn't checked for ages. The joy! :)
I will now close my browser, get back to my translations and read the 3 new blog posts in snippets as I finish translating each text. That's my evening sorted!
Can't wait to buy your book!
You're not remotely fat by the way, you're very pretty and trim. So there.

YOU HAVE BEEN TO SCOTLAND?? EXPLAIN YOURSELF!

Ha, FFD we were in Kyle of Lochalsh! It's probably further from you than Belgium.

Pah, I obviously need to up my petting zoo game. *investigates capybara*

No matter what the poundage, my Calvin Klein bras and M&S pants are indestructible and therefore irreplaceable, I am also fortysomething and unemployable and trying to sell my house to embark on a life for which I have no plans... (p.s. welcome back - I had all but given up on your return hence the late comment!)

Owned by Yves Saint Laurent and Pierre Bergé since 1980, Jardin Majorelle was teeming with tourists, but even with a line-up to get inside, we still had a lovely time exploring the grounds.