Only five more days of this poor quality droning to go, hang on in there. We can do this. 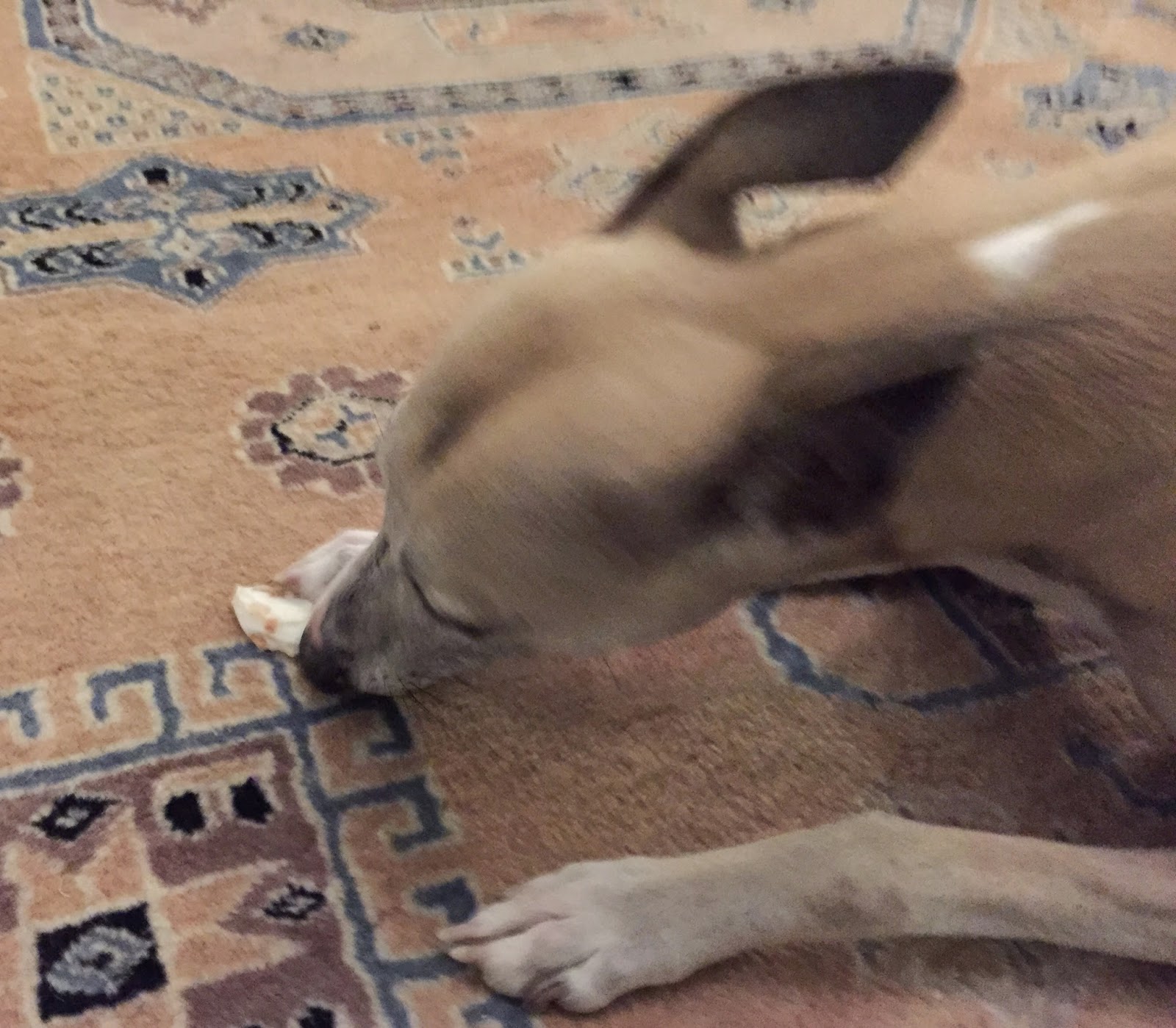 The dog was doing that dog thing where he stands motionless a couple of inches from my face just staring when I am eating YET AGAIN tonight even though I was actually eating chicory, so I held out a limp witloof leaf in exasperation to show him I wasn't withholding deliciousness. He grabbed it and ran away then tried to eat it, then made this face, like those cheetahs eating Marmite, ha ha ha. 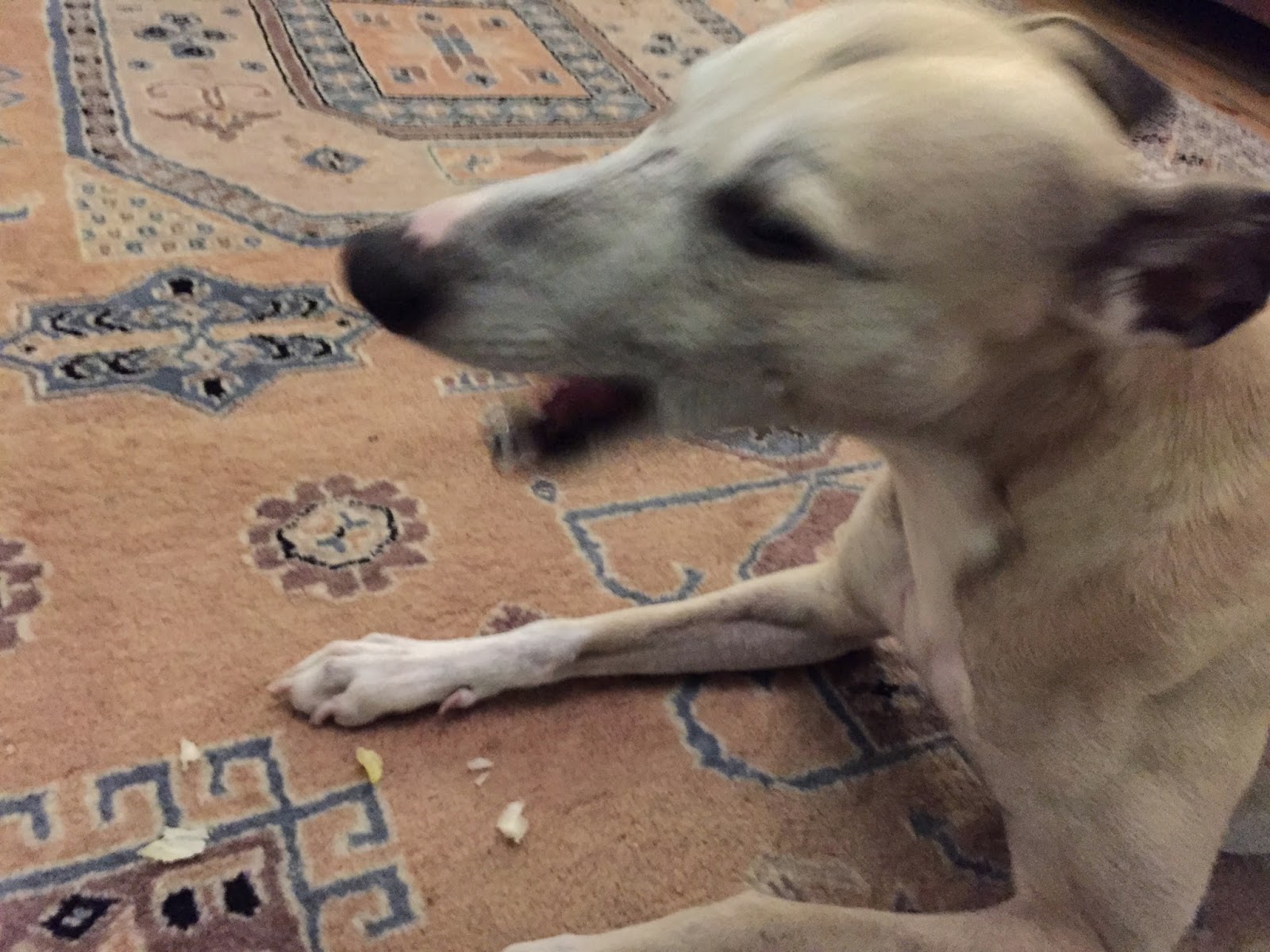 - Interminable queue for a roast chicken which turned out to be dry as the desert - though tastier than sand, admittedly. cf this recent exchange with L: - My family insisting on watching Godzilla followed by "The World's Most Incredible Bridges" this evening. The only way this latter programme could be duller and more xy-y (that doesn't really work, does it) would be for the Top Gear chaps to be driving along the bridges in question. I didn't watch Godzilla but from the bedroom it sounded like the giant lizard was repeatedly eating orchestras, holy intrusive incidental music, batman.

- The taming of the printer - though since I did not do this myself, I am fairly certain the printer has lost any respect it ever had for me (none) (printers recognise no authority) (this one is plotting to kill me as I sleep).

- A lot of lying/working in bed as the seven mugs and three computers strewn around me testify, including a vain attempt to write 40 words about Katy Perry.

- A terribly confused conversation with the hairdresser about tennis which involved thinking that the hairdresser's son was in the Davis Cup (apparently there's a Belgian player called Monfils, seriously, how on earth were we supposed to know something like that, also what kind of a name is Monfils anyway)

How was your Saturday?

Fed my dog walnut halves for breakfast - he wasn't having it - pictured a day of extra-starey stare-eye every time I did anything that could remotely be construed as foodgathering, say, slightly move a limb, or sniff, or glance in any direction, and so sat on the floor and hand fed him his walnuts, which he liked and which I rather liked as I haven't had a baby creature in a long while and he is quite velvety.

One of my cats always gets quite interested in the evenings if I have a snack. Although he spends the rest of the night glaring resentfully at me if it isn't salty or does not contain cheese (real or fake).

Worked in the morning, unpacked groceries in the afternoon, somehow faked a reasonable dinner in the evening.

Know exactly what you mean by xy-y as this describes much of my breakfast/dinner conversation/TV etc.
Sat in heated part of curling rink watching son have curling lesson in rink part of curling rink.
Walked home w son through thin layer of snow and cold wind.
Cleaned my desk. Will soon have a drink and supper.
Life in Bytown =extreme glamour.
Waffle you are almost at 40 posts. It has been very enjoyable reading.

Most of day wrestling with an Aunt Spiker costume involving some fiendish stretchy jersey , miles of netting and an instruction to insert gathers. Which requires pieces of cotton - a mile long which have broken 3 times so far.

4yo can suddenly do nothing without being observed by mommy mommy mommy. This is especially trying when I have a 2 month old twin screaming in each ear. So that was a large part of the day. The rest of the day was spent getting everyone fed, clean & clothed, crucially at the same time, so we could make a necessary trip to a nearby town.

But I have been rewarded for a stinking day by 2 whole hours uninterrupted sleep earlier in the night, so I shouldn't complain about my husband's apparent inability to make a feckin decision about anything child or house.

And he's currently celebrating finally getting "his" twin to sleep by singing Thriller, complete with hand movements. (Sleep deprivation makes you do odd things) He's not so bad really...

One of my favorite things to do with our yellow lab mix is to see what she will eat. She's a huge beggar (only in the kitchen, we have standards. So far she has only spat out raw carrot, lemon and an almond. She has happily consumed all vegetables, as long as they're cooked and all other fruit, including grapefruit. Her favorite fruit is apples--to the point that if I am chopping anything, she immediately comes running because she assumes it must be apple.

I have thoroughly enjoyed your daily posts and will be a bit bummed when you take a well-deserved break.

Oh, oh, I have been enjoying the regular posts so much that I had not considered that they will be stopping. At least the last few will get me through this week. Thank you.

Weekend has featured a rare abundance of cultural activities - photo exhibition around the closure of the Zoological Institute in the southern city of Lund in Sweden. Black & whites of taxidermied monkeys looking desolate in boxes and vitrines, skeletons of extinct animals (thylacine) and flying dogs. Strangely compelling and very moving.

Bach mass in A major and cantatas in parish church.

Picard sorbet de noix de coco. And many episodes of Line of Duty.

just laughed so hard about the face of your weepette. Our beagle will eat anything within reach (or not)and what we provide is edible per se. Bought a postcard with a smiling beagle saying "will work for food." This is just so true ! P.S. I don't have an e-mail adress. Christiane

The Cupertino, California-based company increased its market cap to $700 billion last month and released two new cell phone units: The iPhone 6 and the iPhone 6 Plus. Apple also released Apple Pay, its mobile-payment service, and will release it in the United Kingdom next year.


Thanks for the great post. I liked your writing style most. I like play game as game Stick RPG, score hero game, game return man 3 and game Potty Racers 3

good you have as well as move the WhatsApp to the iPad insert https://whatsuply.com variation of WhatsApp called WhatsPad that is built for the nice.

This is so fun! What a great idea. Also I love how authentic you seem to be. Your style and passion for blogging is contagious. Thank you for sharing your life!

The company provides all services for the disposal of insects, rodents at the lowest cost, and at the same time, the service leads to a high level of quality and honesty in dealing, as we have a team of diverse skills and expertise, which are used by all and directed to one goal is to obtain customer satisfaction .
شركة مكافحة النمل الابيض بالخبر
شركة مكافحة حشرات بالخبر
شركة رش مبيدات بالخبر
ارخص شركة مكافحة حشرات

This post truly made my day. You can’t imagine just how much time I had spent for this information! Thanks.Coming soon site Twitter search