It's half past 11. I have thirty minutes and no ideas.

Went out for breakfast to lovely café for pasteis de nata like a grown up who knows how to leave the house. 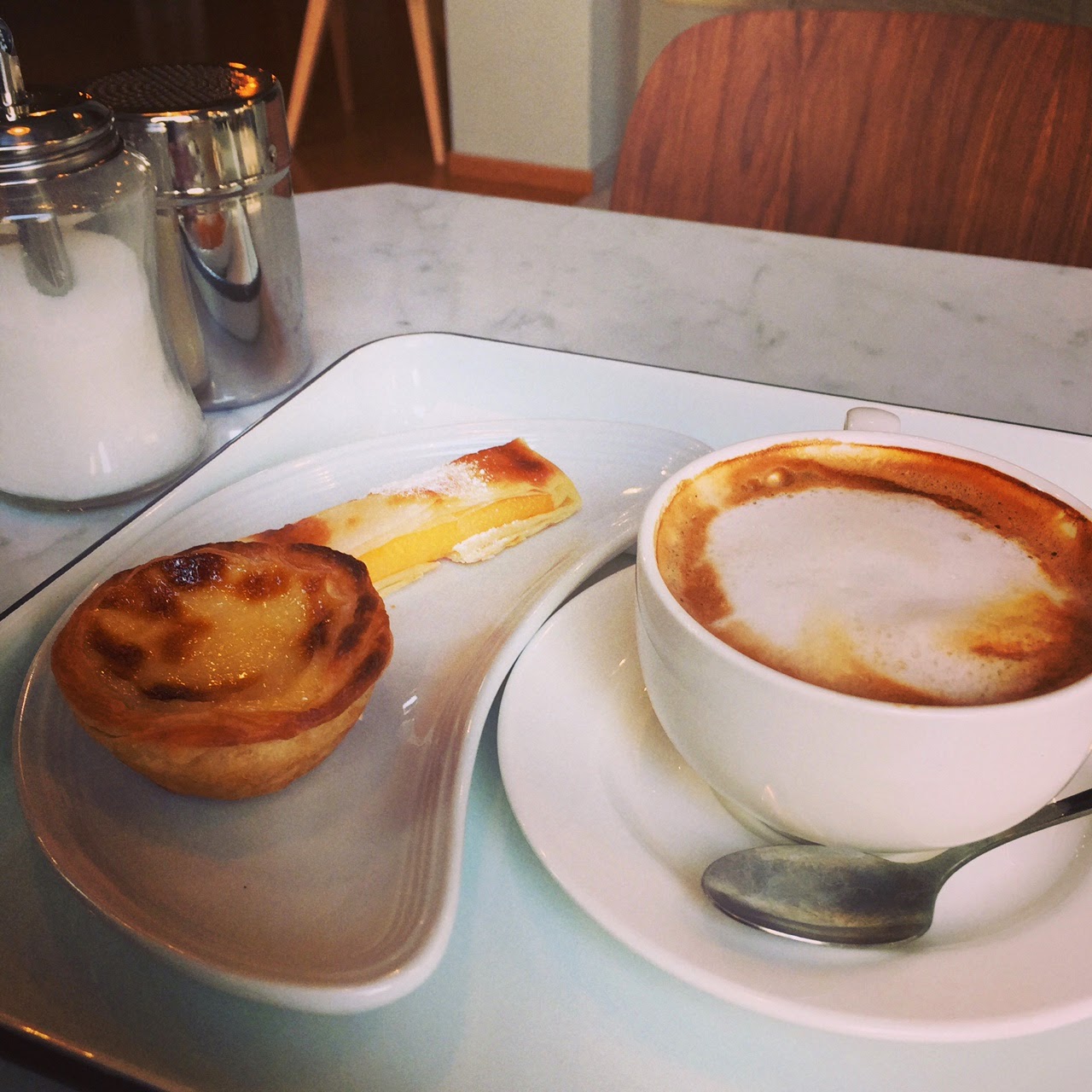 None of your five a day

Got two good commissions out of nowhere (no, neither of them were to give my moving and perceptive view of turning forty. One of them was this, randomly)

I have started on your most helpful and tempting podcast recommendations with Strangers, which is just great and I also acquired a whole new set of crime recommendations (reading, rather than actual felonies) on Twitter. I will report back if any of them turn out to be good.

It is Friday and I do not need to get up in the morning, no not even if the dog stands at the foot of the stairs and makes a noise like a deflating balloon, that is what (i) earplugs and (ii) children are for.

No one came home with any new disasters/punishments/enormous bills for macabre school equipment to report (or at least they chose not to report them which suits me fine).

There were some really good lists in the comments on the last post.

The lovely café sells SPECULOOS PASTEIS DE NATA, which is obviously against the rule of nature and the gods.

I have probably not eaten the healthiest set of foods a person could optimally eat today (dinner was pizza).

I had to share a room with the rebellious printer-bastard today and felt a mixture of shame and rage at its giant mocking useless form blocking out most of the light.

Physical disintegration continues apace/accelerates and I have run out of giant orange horse pills.

Achieved none of the dreary admin tasks on my several to-do lists.

Had to watch several tedious hours of Koh-Lanta (French survivor), L's favourite programme, gangs of dullard French men running around in scrubland trying to use a compass.

Had to spend some time in the company of a website so extravagantly dull I kept drifting off into a fugue state whenever my eyes rested on it. Consequently failed to complete necessary website related tasks and must return to it next week.

I have worked it out and I definitely got the calculation wrong and my birthday falls on the 39th day of the forty day posting thing. Ha ha ha.


One minute left! Good and bad for your Friday? You are so kind to keep commenting, thank you.

Good: cut and stripped wiring for five sets of lamp fixtures, without being asked or told to (thus neatly circumventing the resentment inevitable when I am told to do something I was planning on doing anyway).
Ate some grapes instead of nachos when hungry.
Had Romanian lesson.
Bad: Spent 5 hours on the internet doing almost nothing.
Ate nachos after ate grapes.
Am shit at Romanian.

Good:
I worked from home today, a perk that I never had at my old job.
There are no plans this weekend. I plan on reading, lounging under freshly washed quilts and ignoring all text messages.

Bad: I bumped my left nipple on a corner while trying not to trip over my blind dog and hours later it is still reminding me that I bumped it.

That electric shock experience is so silly. Reminds me of a friend whose boyfriend actually joined her in a pregnancy yoga class so he could be more 'attuned to her experience' gaaaaaah

Good.
Excellent mail day- something for me, and a gift for my sister.
Attended a work meeting that I was being paid to attend.
Sneaky bar of ridiculous Willy Wonka chocolate.
Afternoon nap.

Bad.
Tedious work meeting that made me want to grind my teeth.
Sudden and inexplicable bout of self loathing so violent I needed to eat chocolate and take afternoon nap.

Bad: The toddler has a cold, and every attempt at wiping his nose has led to total hysterics, the kind normally reserved for tragedies such as the withholding of cookies or being asked to take a nap.

Good: Sick toddler means he prefers sitting on my lap with a pile of books as opposed to climbing on the furniture. It was a lovely way to spend a rainy afternoon.

Bad: Although if I have to read "Star Wars ABC" one more time…

Bad: Didn't really know a soul there other than the authoress herself, and had to hastily employ long-neglected skill of trying to look at ease in a crowd of strangers who all seem to be part of the same social circle. Failed miserably and fled as soon as I could without appearing to be impolite.

Good: Husband came home with two jars of honey, the product of his brother's sudden interest in bee keeping. It's from earlier in the season, which he says turned out lighter than the darker, thicker honey from later in the year. I didn't realize honeys could be so dramatically different, like wines, although presumably you doesn't swish honey around in your mouth and then spit it out. At least, I hope not.

Bad; found out that the meeting I have just been elected to attend requires me to write a report. Today.
Good; everyone is so remiss in providing their reports for said meeting that the deadline for submitting them has been extended to Monday.
Bad; I still have report writing doom hanging over me for the weekend.
Good; Looking forward to tonight - Graeme Norton and his puce and orange set with guests provides light and frivolous diversion.
Bad; Looking forward to tomorrow - the spring weather is so vile and extremely windy that no outside recreation (sailing specifically) will be possible for the 3rd Saturday in a row.
Heather (NZ)

Good: Vile and detailed work task completed at last.
Decided to put off taking niveau vier Dutch until spring.
Saw the sun for the first time in days.

Bad:
Discovered significant other's motorcycle needs to be ferried to "the dealer" since something extra fancy is wrong with its whatsits. That will add more euros to the eventual fearful total, obviously.
Having cleared off the work things I now must face working on my own writing.
There does not seem to be any food in the house.

Good:
Didn't have to go to campus--a long, long commute I have to do twice a week.
I was also able to postpone grading final papers turned in this week because I don't have to give them back until Dec. 9.
Little to no class planning required for class next week as few will be in attendance due to Thanksgiving coming up.
Was actually sunny.
Don't live in Buffalo, NY
Found some real bargains at the consignment shop.

Bad:
Need for full time employment in my field requires multiple applications with multiple parts such as CV, statements of teaching and research, writing samples, student evaluations, blood samples, etc. All of which means any 'free time' not devoted to keeping head above water teaching-wise is spent trying to craft documents that will get me to the next round.

The Christmas arcade assay has replica handbags acutely begun, and every aborigine are able and planned for the occasion. Whether you're braving brick-and-mortar aliment or browsing online at home, there are door-buster deals everywhere. Cyber Monday and Black Friday has consistently brought the bodies on their feet. Christmas ages has been the admired ages of ceremony and every bodies for years abnormally women and omega replica children. The best sales would be women's accouterment for Christmas for every online store. A huge accumulating of women's accouterment and accessories and latest accouterments are provided with discounts and adeptness and some added chargeless casework too like chargeless addition worldwide. For example: an online arcade centermost is accouterment up to 90 % off on women's accouterment and apparel, shoes, handbags and accessories too. Additional an added 5 % abatement is acclimatized if the promo blank of the prada replica affluence is used. Also, there is a ceremony for chargeless addition accustomed if the acclimation aggregate is added than 89%. That is actually a abounding deal. Aswell some of the sprees provides a chargeless allowance with every ceremony you buy.

You will get precious steel females timepieces within 14 karat sixteen karat or more pure All day long and karat. The greater the karats, the greater the purity using the rare metal articles. White gold can also be accessible, the platinum metal, combined along with another metallic a replica chanel handbags genuine impeccable in addition to palladium. Rare steel necklaces can be utilized within probably the most ﻿replica Hublot watches everyday including scenarios. It'll charm a simple attire. At the same time, it will never actually get dropped, even simply in one of the most official including clothes. Rare Swiss Replica Watches metal Ladies Timepieces aren't any kind of different. Putting just replica Breguet watches one on might be only an excellent postscript, but it could make a entire replica Bell & amp Ross Watches UK ensemble relationship.

Thanks so much for this great article; this is the kind of thing that keeps me going through the day.

Snakes are divided in terms of toxicity into two venomous snakes and non-venomous snakes. In terms of strength, they are divided into spiny snakes and non-spirited snakes. Snakes are very dangerous reptiles to humans, the snake can in one bite eliminate human life and cause death
شركة مكافحة حشرات بسكاكا
شركة رش مبيدات بسكاكا
المبيدات الحشرية الكيميائية
افضل شركة مكافحة حشرات