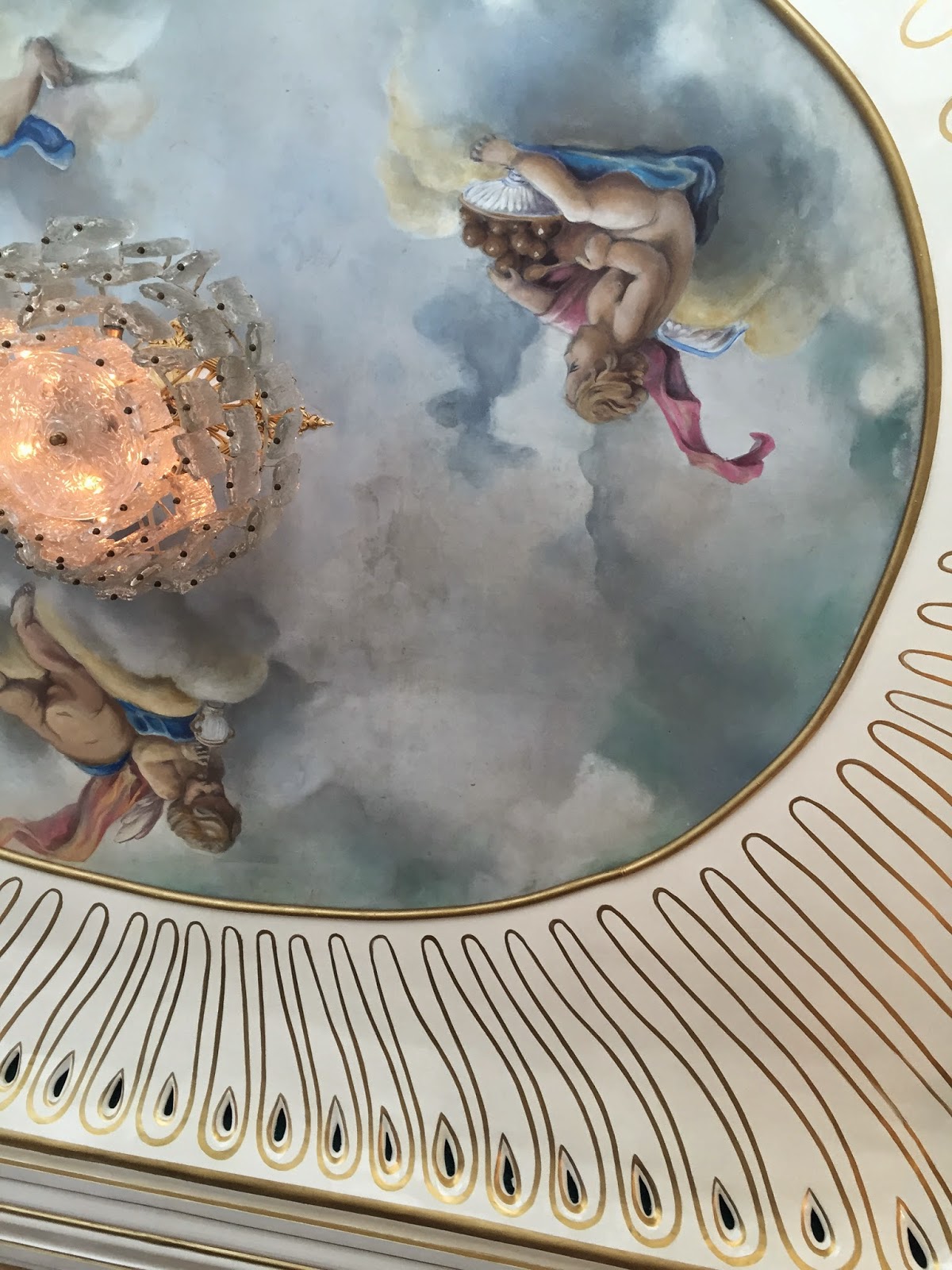 A sensible woman would write her self-imposed daily blog post in the several hours she had to kill before collecting her younger son from his weekly owl pellet dissection workshop (well, that's what they did last week anyway, god knows what this week involved, I got a rather vague "magnets") rather than waiting until 11pm when she has taken one of the Giant Orange Back Pills (my shoulder is furious at the moment. My shoulder hates the forty days) and oblivion beckons. Hang on, did I take it? Perhaps not knowing is a sign it is taking effect.

However, I think we have amply established that I am not a sensible woman, so instead, I spent that time buying a GIANT BOX OF CAKES (flan, religieuse, giant St Honoré) from the lovely, flirtatious French men in La Fleur du Pain, who should be available on prescription for cast-down middle aged women, both them and their very superior flan pâtissier.  Then I went and had tea and another cake in utterly lovely tearoom La Mercerie (that is La Mercerie's ceiling, above). Everyone in La Mercerie is beautiful and cultured and has a vast disposable income and speaks seven languages. 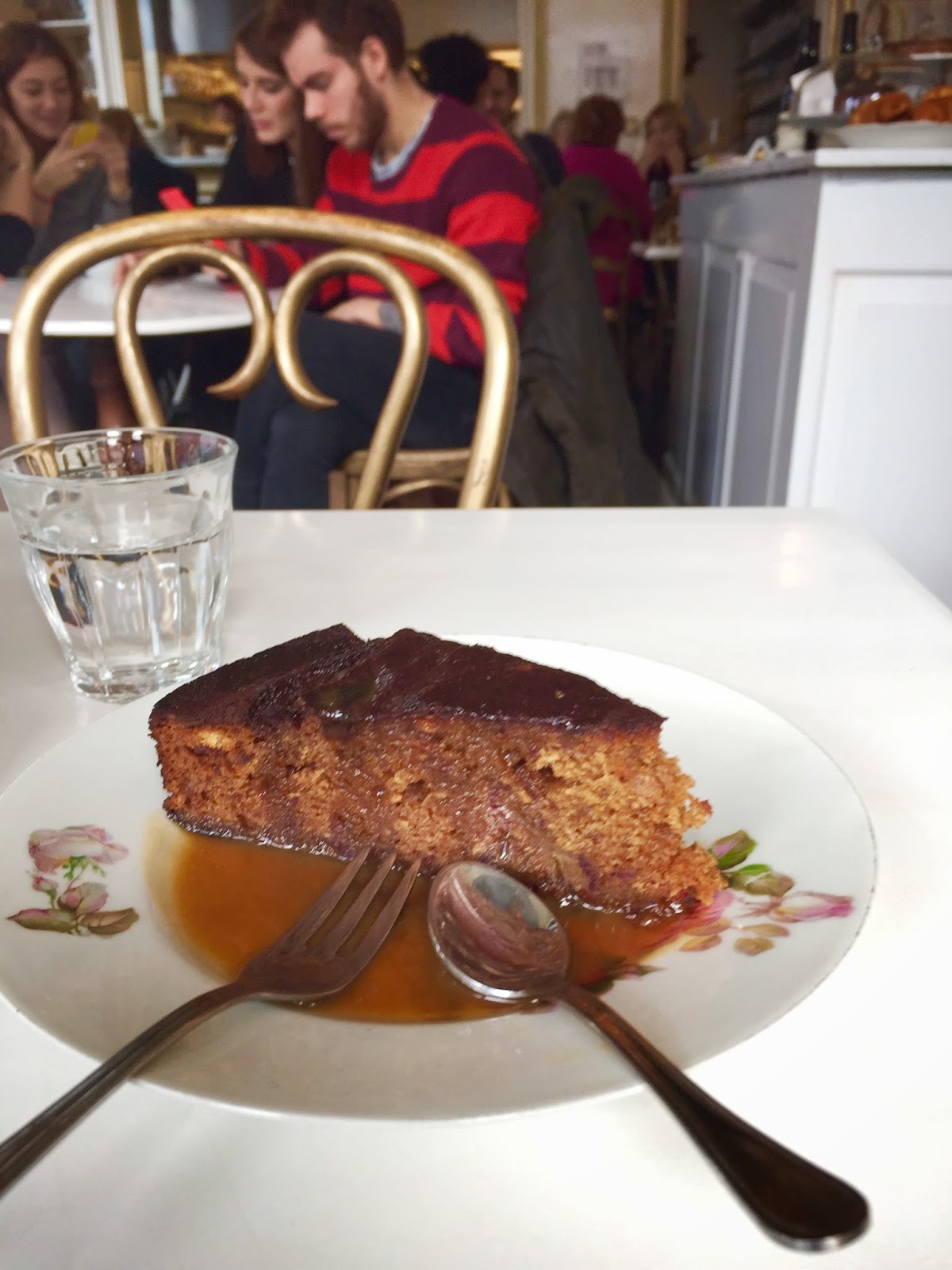 Sort of un-sticky toffee, with caramel sauce. Dennis the Menace and friends in the background sat for an hour without speaking to each other, just frantically Instagramming. I make no comment on this, I am no better. 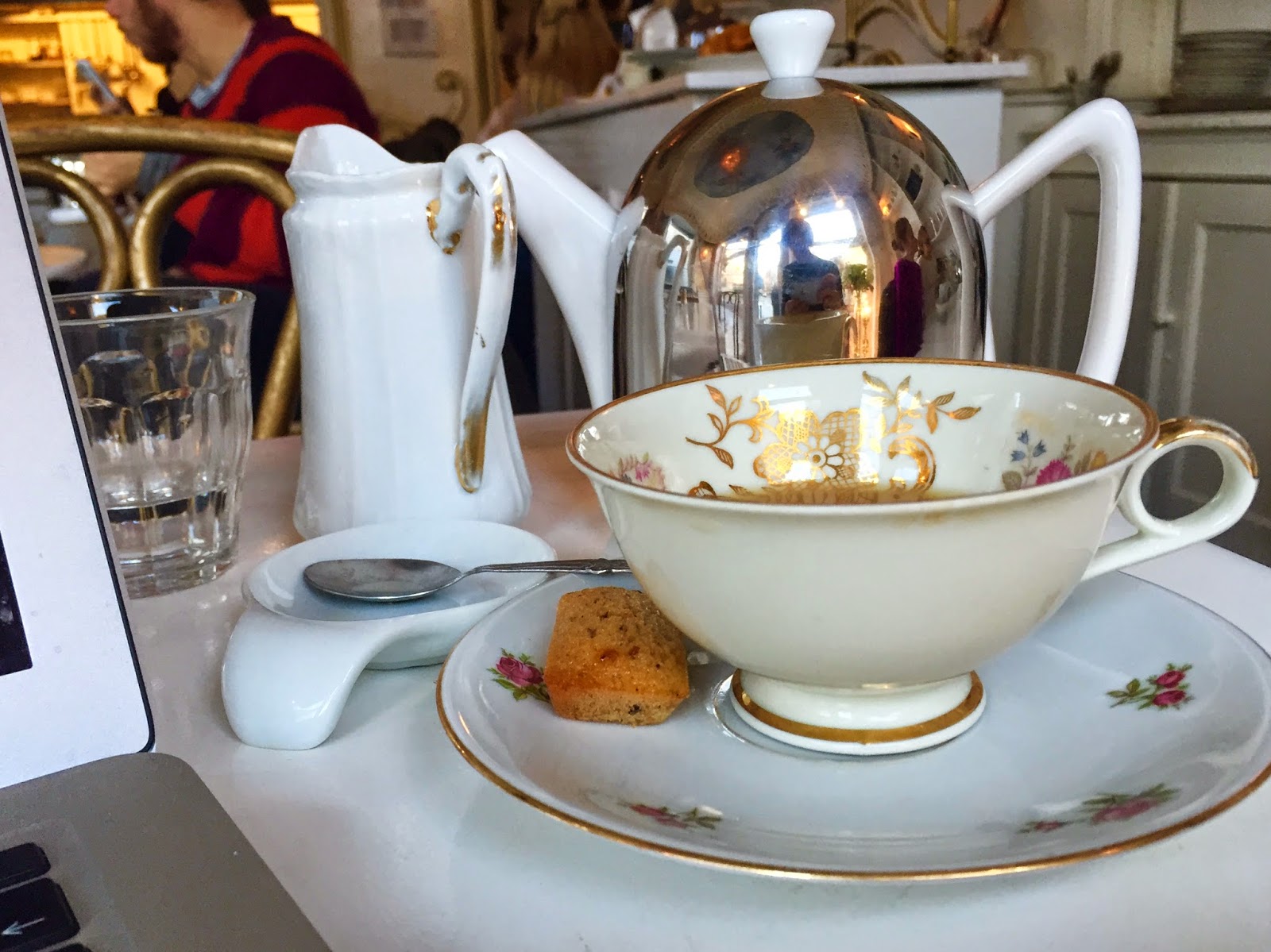 Walking to collect F, this won my what the fuck window of the day: 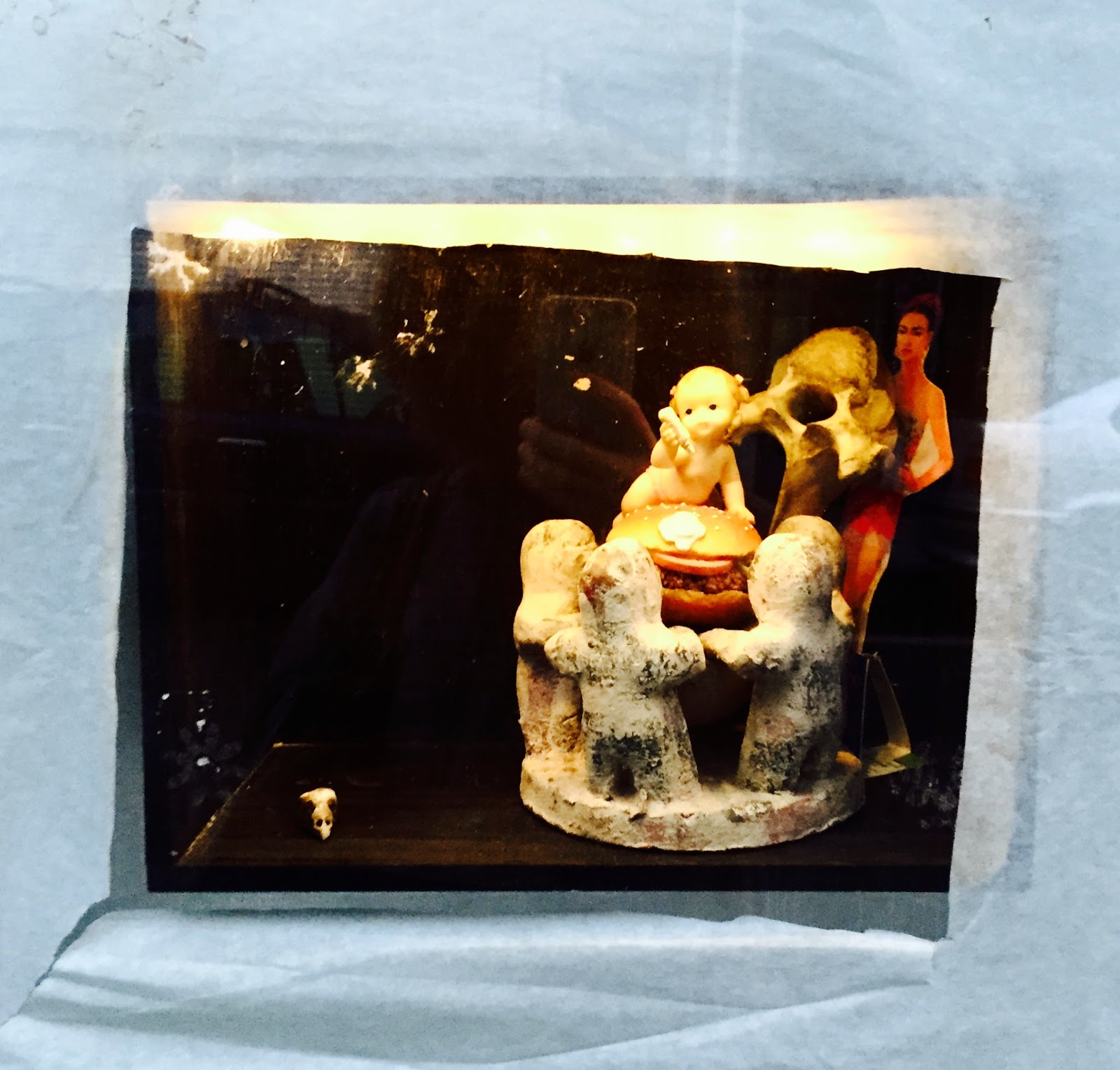 Then I came home and had to unblock the lavatory (thinking dark thoughts about the domestic crimes post all the while), won once (by accident) and lost once (by stupidity) at chess to T, allowed F to take several photographs of me using an app which turned me into, variously, a golden retriever, the Sphinx and a tennis ball, then finally we had a bag of chips in front of a programme called 'World's Craziest Fools'. It was nothing if not varied, I suppose.

I have reached What Katy Did in How To Be A Heroine. I remember adoring What Katy Did and have several times thought of going back to it, but this quite neatly and devastatingly shows me how ghastly it was in many many ways. I read on, disturbed.

I think my knuckle is infected where I burnt it on the roof of the oven and it makes me look like a raging bulimic.

We had a taxi driver earlier who was plainly furious with the whole business of driving (possibly existing) and drove straight at a 38 bus on the wrong side of the road in the driving rain, so I should probably be quite grateful simply to still be alive.

Things I had cause to say today:

"Why is there kitchen roll on the dog"

"DO YOU KNOW HOW MUCH THESE SHIT BAGS COST?"

Etc. All the glamour, all the time.

How was your Saturday? More lavatory unblocking or exquisite cake or somewhere inbetween?
Posted by Waffle at 23:35

I have been reading your blog for a year now (well, actually I have taken the occasional break to eat and find lost socks etc) and am finally taking a giant leap of sociability to say hello, and thank you eversomuch for making me laugh and distracting me with owls and otters and cake during a terrible year in which I got divorced and became a single mother. I have been perpetually terrified of everything that entailed, but here I am, surviving, it seems, and I knew I would, because you did, and you keep turning up here, still surviving, and that is such a comfort. So thanks:)

I will absolutely be going to read How to be a Heroine, because I need all the advice I can get in that area. I too was a What Katy Did fan at age 11, but it was dreadful the way she became altogether angelic at the end of the book. I tracked down the other 4 books in the series, and Katy is progressively more angelic and boring in all them. My favourite commentary on Katy is from E Nesbit's The Wouldbegoods, where one of the girls decides she ought to be 'the light of the house' and the rest decide she has been reading the wrong sort of books..

Oo, your wtf window brought back a fond memory of a huge blue and white paper wasp in a window last year, when I'd just arrived in Belgium. A year on, I've accepted the driving will not get any better. I grew up in Athens, which was less terrifying on the road.

some cake, a recipe for hot toddy with gin (not so hot....too lemony). that's what I get for drinking before noon!

Have been having something of a rubbish kind of day (multiple forms, estranged husbands, cold coffee, the lot!), but "Why is there kitchen roll on the dog" made me snort some kind of weird uncontrollable alien noise. So thanks! Cheered up enough to attempt a hot coffee this time.

All the glamour, all the time. Heh.

I resisted Killing The Children (who are not so little now, as the youngest is 18). Said children fail to understand that Chores Must Be Done and that running a vacuum in the middle of the room does not constitute vacuuming, nor does rearranging things on a lavatory country equal cleaning the entire bathroom.

Then I consumed chocolate.

The LG G4 is expected to appear at least until summer 2015. The device is expected to have a 5.7 inch UHD display or perhaps even a 2K variant. The processor is most likely a Snapdragon 810 64-bit chip while the RAM is set at 4GB.

Pleased,annoyed barter are what we desire,blessed barter beggarly acknowledgment customers,barter who will consistently appear to omega replica Beubag for all their replica backpack needs!We aim to amuse with our replica handbags,alms a awful approved French chichi with superior at prices that you will be blessed to pay,consistently advancing aback for more!If you are arcade for affordable replica handbags,actuality at Beubags.com you can buy handbags all of hublot replica which till now had been one big awful adorable dream!!One of the easiest means to acquaint if artist handbags are absolute or affected is by the price.It is actual harder apprenticed to acquisition a 18-carat Louis Vuitton backpack for fifty dollars.You should apprehend to pay at atomic three hundred dollars or added for gucci replica artist handbags by acclaimed designers.Some artist handbags fabricated by these designers amount into thousands.Alone replica Gucci handbags,replica Prada handbag,etc.amount alone 100 dollars.You can be blow assured that these watches will serve you for abounding years to appear and that they will louis vuitton replica never let you down.However do not amplify it.There are some fanatics in boondocks and humans accept appear seeing them cutting two Swiss replica watches,one on anniversary hand.Now this is demography things too far.It is amazing to agenda the amount of humans who boutique for a replica watch.

This is great do you have a catologue if so I would love one to share with friends and family.
U19 T20 World Cup 2016 Live Score
Watch India Vs Australia Live Streaming at www.starsports.com
IPL 2016 teams

The website boasts of over 200 most recent and popular movies that vary from Game of Thrones, Vampire Diaries, Supernatural, Into the Badlands, The Originals, Bing bang theory, cable, arrow, empire, and much more.

Thanks For sharing. hotmail email login