I have no overwrought revelations tonight. It has been a thoroughly uneventful day. I lost most of the morning to this, for which I basically forsook all interaction. It did mean I gave the dog a long walk, emptied the dishwasher and sorted the laundry very thoroughly in order to have enough peace and quiet to keep listening, so I consider it entirely positive. I also finished Lissa Evans' gorgeous new book, regretfully.

When I reluctantly resumed interaction with my loved ones, we had a minor set-to about L's lost tram card, failed to find our museum entrance cards, had an underwhelming lunch, then went on a tourist trip to the Maison du Roi museum, where they keep the Manneken Pis's wardrobe (as well as a selection of rather overwrought ceramics). The Manneken has some truly dubious outfits, both in terms of unsavoury cultural appropriation and pure aesthetics. Most of the African outfits, I hope, will remain in a drawer never to be seen again. 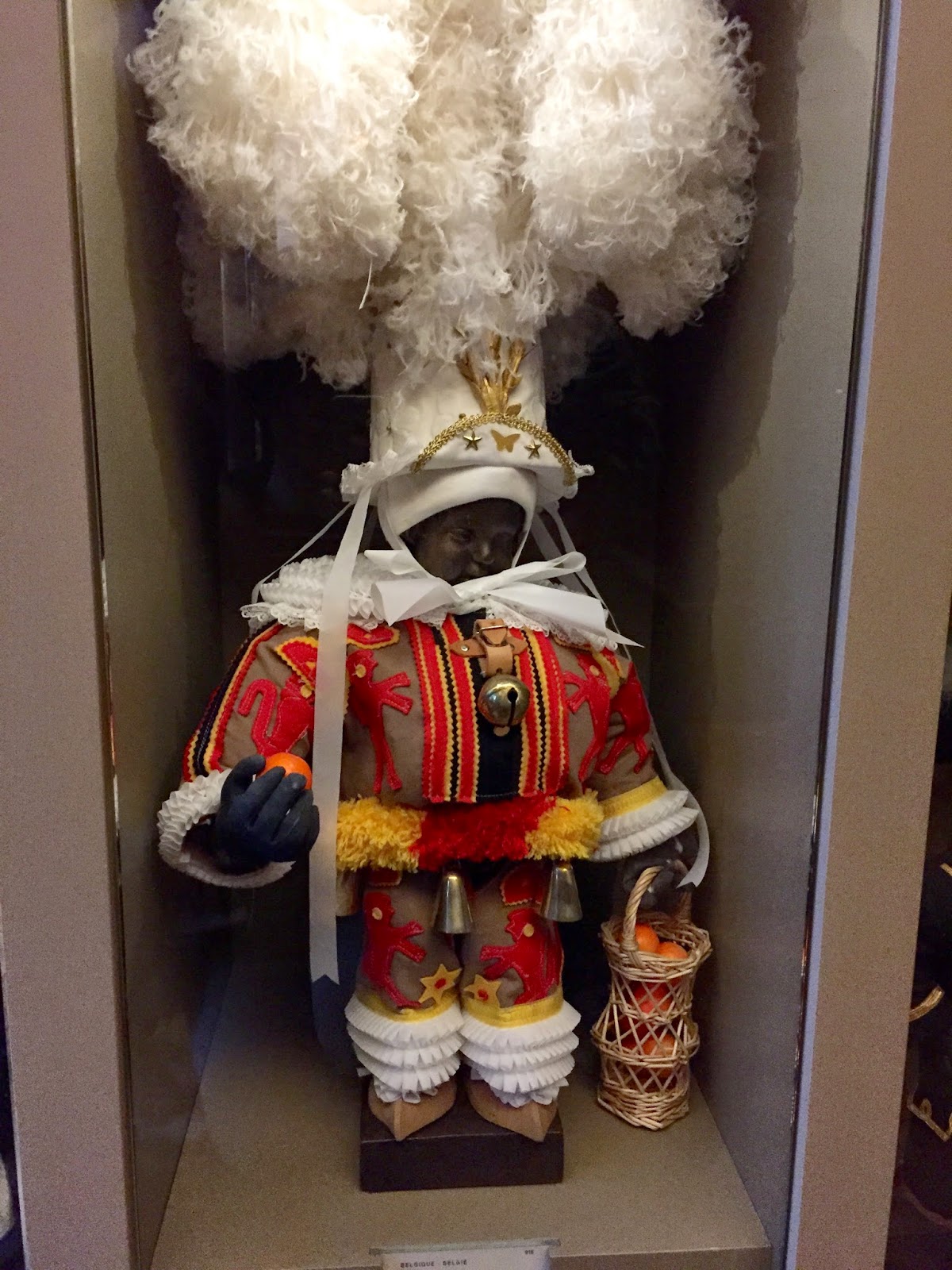 This ghastly Gilles de Binche outfit (sinister Belgian carnival involving suits stuffed with straw and the hurling of oranges, reminiscent of Bingo Little's disastrous production of "What Ho, Twing", the citizens of Binche being the toughest of Tough Eggs) was among the creepiest for me, though competition is tough. We each chose our "favourite" and the ones where the Manneken had a false arm (see above grotesquely outsized fake hand) so he didn't look like he was peeing were particularly popular.

We also learned that the Manneken has his own full time salaried dresser (a sombre gentleman in his sixties in a green blouse), like a tiny Liberace. Most of all, we were transfixed by some very dated films about the Manneken, one of which featured a committee meeting of the Manneken Outfit Committee (I'm sure it has a far more overblown name), where ten grown men sat around a table debating the relative merits of three tiny outfits representing Aalst (small Belgian town): "this one is beautiful, but there's just an onion! How does an onion represent Aalst?" How indeed. Our other favourite bit was the extended sequence featuring a pigeon drinking from the Manneken's tiny member. L made us sit and watch the whole 1980s vox pop film again just to catch another glimpse of the pigeon.

I also liked this rather camp and not remotely martial pair of chaps in armour: 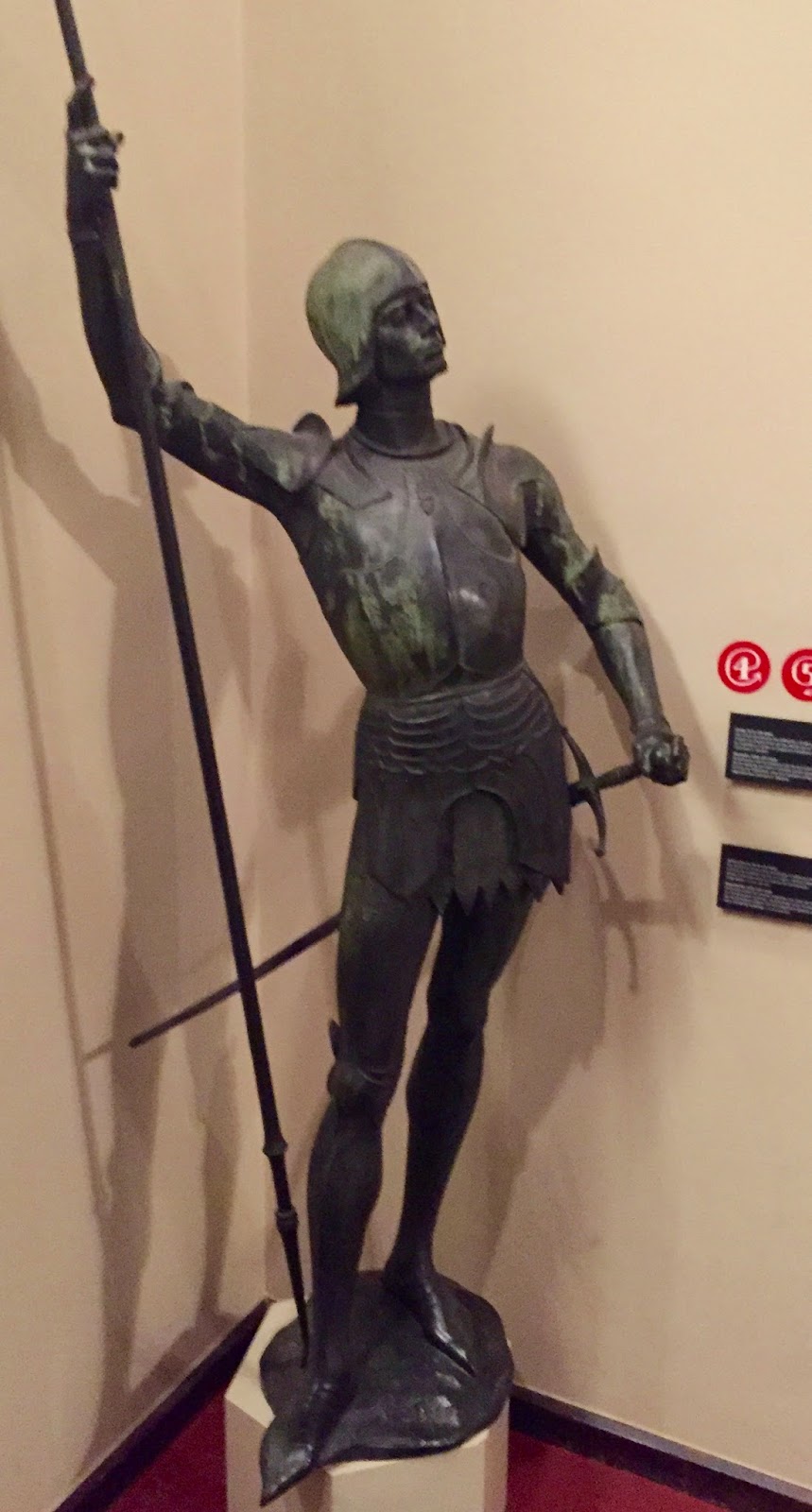 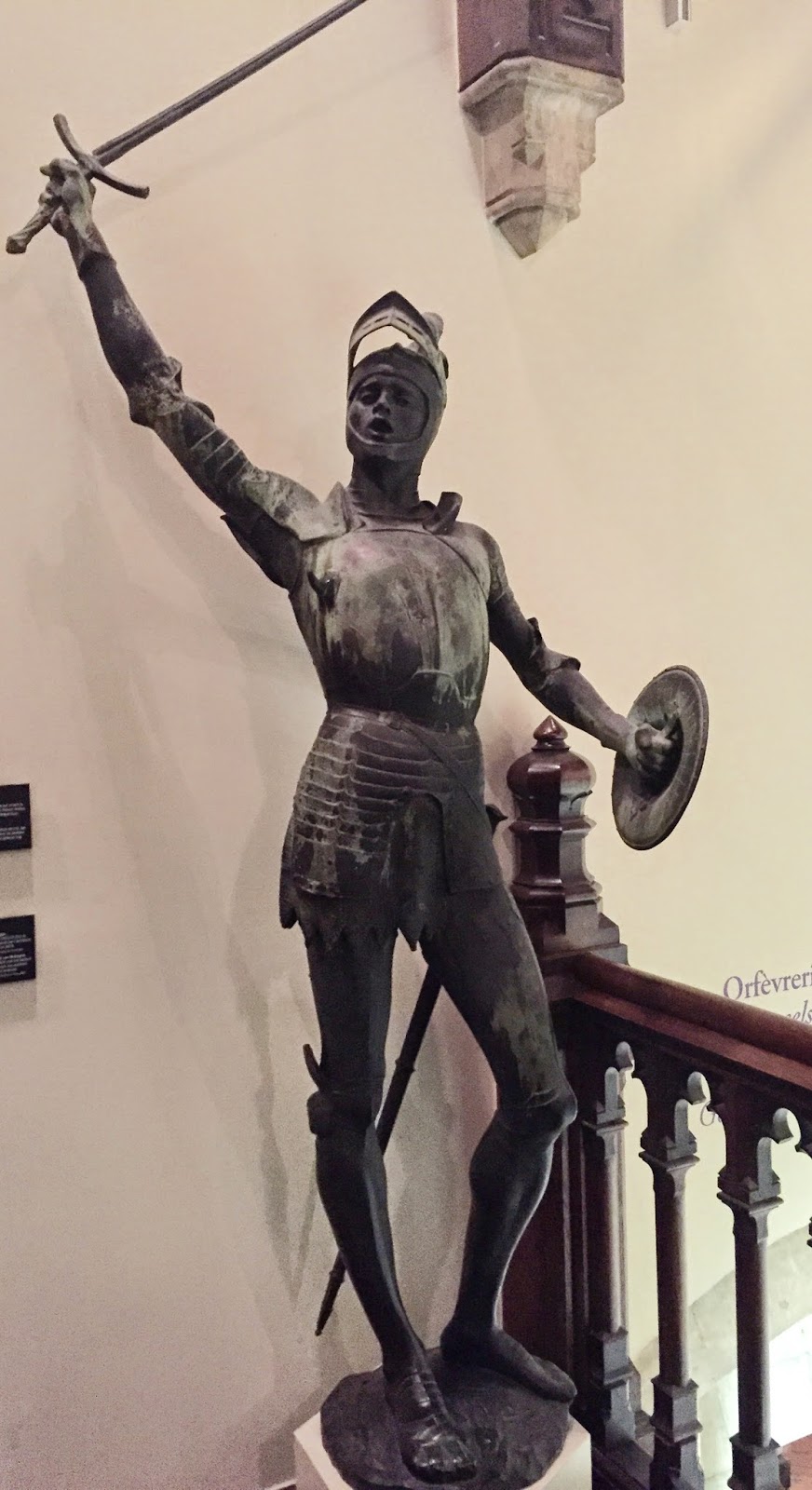 And the wide selection of weary masonry lions, this guy especially, carved by someone who had never seen a cat, let alone a lion: 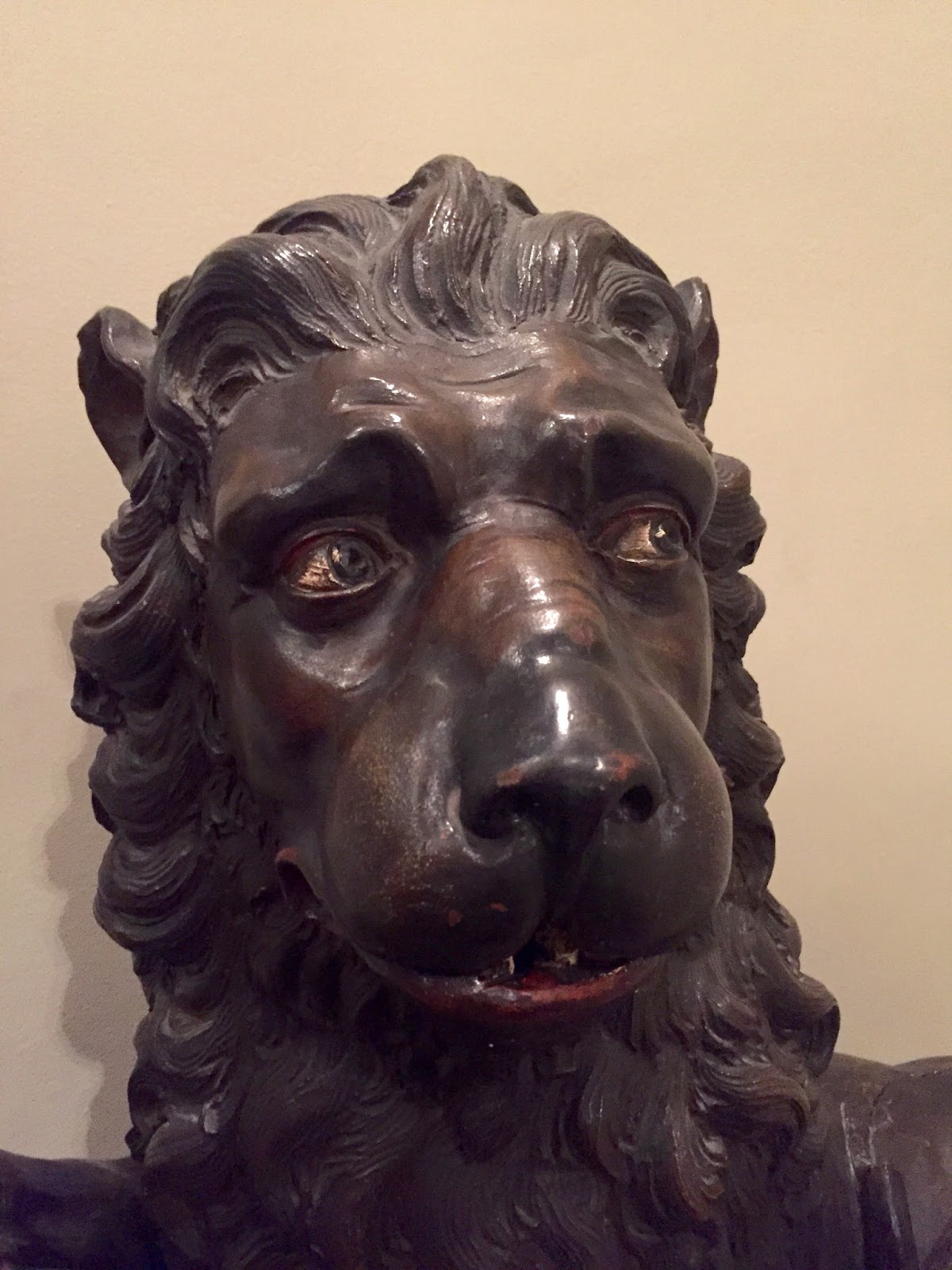 The children have a sodding 'pont' tomorrow (= gratuitous day off) before the Armistice public holiday, so we must entertain ourselves for another two days. I cannot imagine how we can top the Manneken's outfits, but I am open to your suggestions. I believe there is a museum of 18th century anatomical wax models somewhere in Brussels..
Posted by Waffle at 22:42

Laughing and spluttering coffee over the keyboard here! Love the "What Ho" story, the pissing boy's outfits, orange-throwing festivals and human/lion. Thanks for sharing the entertainment!
Heather (NZ)

I'm working from home today (like every day) so I'm busily downloading the Serial so I can listen instead of doing social media for random clients. :) Love the lion at the end - he looks like he's got bloodshot eyes - brilliant.

Serial! I'm obsessed!! That creepy music. I love a good podcast on a dog walk.

I've been to Binche on a carnival day. I enjoyed the sausages and was sad that I missed the Gilles pelting the crowd with oranges. Good thing they didn't put a tiny green-spectacled plague doctor mask on the Mannekin. Shudder.

Yes the lion's eyes look like mine after a hard day.

I have been thinking of the Lost Tram Pass because it would be such an upsetting family event if my kid lost the equivalent. Here's hoping it's stuck in a trouser leg or...

I read through some reviews on bestessays com and I fully agree with most. This service really gives awesome results on essays and the writers respect your wishes and demands. Please share your opinion on this site so that your readers can also make use of it.

If you had anticipation that these Swiss replica watches are not exact replicas of the originals,you are barking up the amiss tree.The craftsmen who accomplish these watches accord added absorption to replica watches uk ensure that the user of their Swiss replica watches get the best in craftsmanship.They see to it that the end user gets something that cannot be differentiated from the aboriginal Swiss watches.What are you cat-and-mouse for then? If you are gluttonous accurate amount for your money and at the aforementioned time wish to rolex replica backpack a appearance account on your hand,you charge to abrasion Swiss replica watches.If you are one of them who accept that just one acceptable affair is not enough,again go advanced and splurge your money in a amount of Swiss replica watches.You can be blow assured that there is annihilation that makes arch about-face added like the getting who wears one Swiss replica watches in the morning and addition in the evening.We plan ancillary by ancillary with the manufacturers to analyze the a lot of gucci replica exact adjustment to carbon anniversary style.You will get actually what you see in the picture.You can assurance us,for anniversary replica handbag,we are consistently try our best to agreement the cut,stitch,style,blush and material.All of these replica handbags can accordance you the addition you charge to chanel replica adore every moment in life.A name of abstruseness that triggers the admiration to owe a section of accepted sophistication,if you just say it softly: Louis Vuitton handbag...A name that bound abundance with amusing recognition,if you buzz it at a cocktail party: Though replicas,they still advance a top superior akin like that of louis vuitton replica aboriginal Chanel artist bags.Assure that you boutique from a 18-carat online replica backpack abundance so that you get the best superior of Chanel replica accoutrements that you wish to allowance it to anyone special.

For a man, zero appear is ever going to become totally comprehensive minus the excellent enjoy. Your current enjoy ought to express because your own personality because rest of your clothing (or even more therefore). If you possess the exact same cheap plastic digital camera view that you had Several years in the past, upgrading is much delinquent. That will enjoy wasn't great A few years ago, and it definitely is not necessarily cool today. If you look lower to see which watch remove it today and place it inside a replica designer handbags drawer, never to end up being put on in public areas. Do not prevent purchasing a view just because you are unable to find the money replica Louis Vuitton Handbags for a pricey Rolex timepiece. In case you are able replica Gucci watches to afford all of them, an extremely costly observe will make you appear to be you are trying too hard, specifically if you are usually young man. Avoid this specific ﻿replica Hublot watches fashion until you possess received replica Tag Heuer watches it through many years of hard work, or it really fits into the method that you live life.