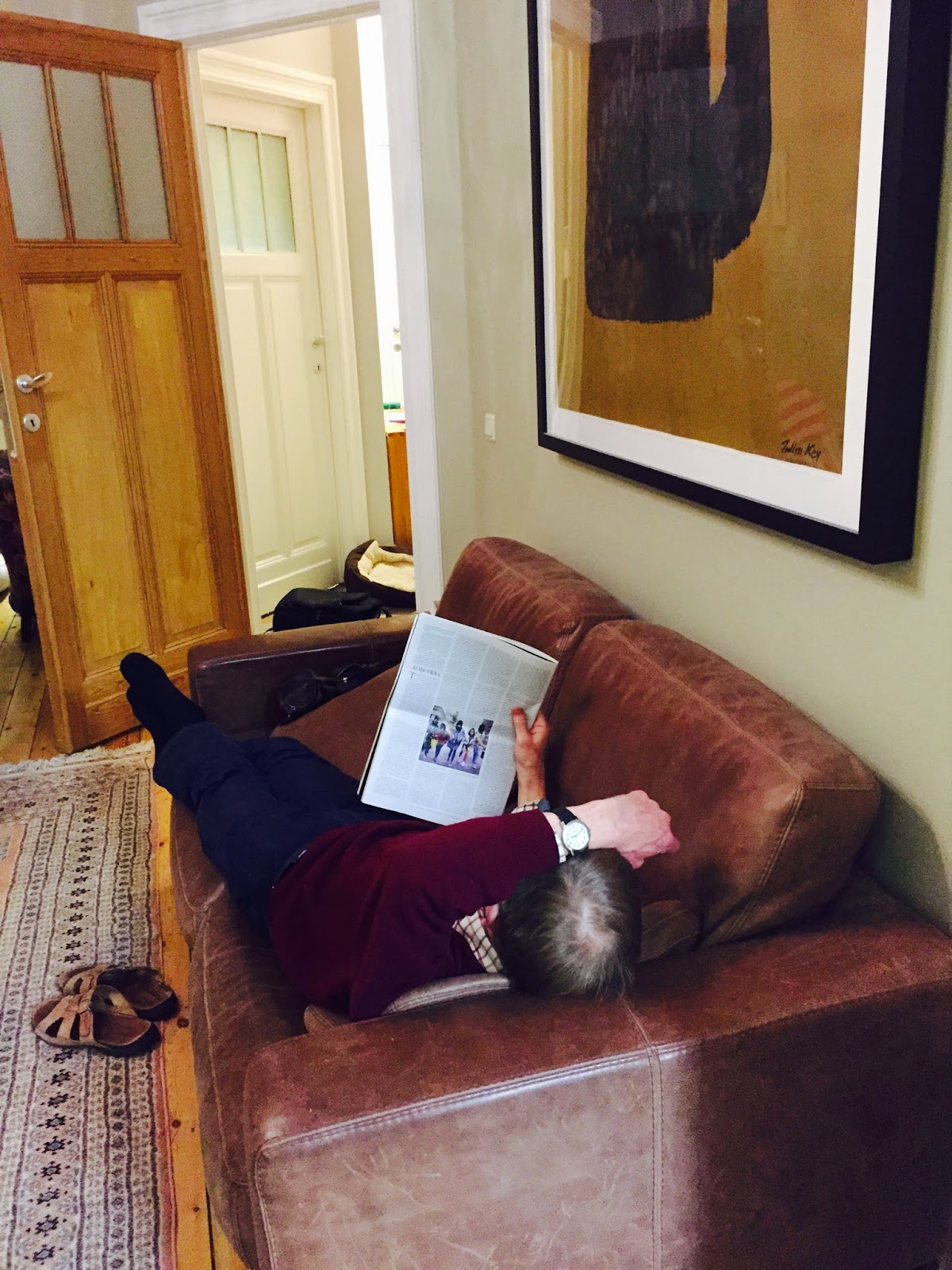 Prog Rock is here, lying on the sofa with the LRB, telling me about how A J Ayers had an affair with e e cummings' wife. He has brought us a Christmas cake, tightly wrapped, in a tupperware box (before we broke the news to him that we were actually descending on him for Christmas, poor bugger). We have also played Scrabble - even though he hates it - and discussed the pantomime.

"Towards the end of each pantomime... Berwick Kaler throws Wagon Wheels, as one might a frisbee, to the audience, as well as handing out a bottle of Newcastle Brown Ale to a father in the stalls."

I have booked tickets for the whole family to go and see Berwick Kaler in a wool wig, huge dress and bovver boots in Mother Goose at York Theatre Royal on Boxing Day and am thrilled. The very first pantomime I ever took L to see was Berwick Kaler in a wool wig in Mother Goose, at York Theatre Royal, eleven years ago. It was in the darkest, unhappiest time imaginable, a couple of months after mum had died and my sister and I took him even though really she should have been there to take her first and only grandchild to the panto. It was a bit daft, because he was only 18 months old, but it was one of those defiant, ceremonial things we did, because it seemed like the thing to do, and actually, it was very funny as well as heartbreaking. L was by turn troubled and enraptured by the experience, grasping a sweaty Matchmaker in one hand and clutching compulsively at us during the scary bits, with smoke and the baddie and his flashing devil horns and strobe lighting. It definitely marked him, particularly Mother Goose herself, a giant, waddling, stripy legged enchantment from whom a vast golden egg would occasionally emerge, to a showy cymbal clash from the orchestra pit. For weeks thereafter when I put him down at night he would grasp my wrist and look me deeply, searchingly in the eyes, then ask "big goose?"

He was such a highly-strung, intense little thing back then, full of terrors and improbable ideas of imminent peril (the boulder!) and whimsy. I think for a year or so his life was desperately hard to fathom: there was so much upheaval and sadness, death and adults behaving strangely, a sibling and a move to another country. A giant goose laying golden eggs was just another layer of weirdness. Good? Bad? He didn't really know what to make of it, but he knew it was important. It was funny and sad and lovely all at once and every night I would pat his plump hand in what I hoped was a reassuring fashion.

"Yes," I would say, unsure if this was the right response. I often didn't know what to say to him back then, what would make things better or worse. "Big goose." This ritual seemed to satisfy him and he would nod, and turn over, and I could turn the light out. After a few weeks the big goose faded from his imagination, to return only occasionally over the next year or so, relegated to a bit player in the steam engine dramas that followed us for months along the streets and railings and through the gravel of Paris parks. But my sister remembers it, and I remember it. Big goose.

It's quite hard to reconcile that febrile creature with my huge, calm, gentle, sarcastic boy. "Big goose!" I say, delightedly, as I book the tickets and of course, he doesn't remember, looks at me as if I am slightly deranged. But I will definitely buy a box of Matchmakers and make him sit next to me on Boxing Day.

(*this was not what I meant when I said I had an idea for a post yesterday. I am still plotting that and it is silly)
Posted by Waffle at 22:49

A beautiful piece of writing, which has made me grin like a loon, and want to give my son a giant hug. Thanks

Wonderful. And reflects exactly where I am right now with the toddler. 'Thunna?' she asks every time there's a vaguely loud noise, freezing whatever she's doing, grabbing my hand and stating up in the air. (Hilariously - tho not so much for her - if it is actually thunder she screeched and tries to climb, cat-like, up my body.) also, i reread your Boulder piece and it was fabulous, again. Ah, I miss the Saturday Guardian, and your articles livening up the Family section.

How lovely. At that age, smallest b-boy inadvertently saw something on CBBC that caused him to lie awake at nights worrying about 'the stomach'. Several years later he saw it again while we were all together and watching The Sarah-Jane Adventures. A less scary thing you can't possibly imagine, but it vexed him greatly for a long time. Now it's mostly Ebola that keeps him awake at night, but that's mostly a ploy to see what's going on on the X Factor, I suspect.

Also, I meant to ask, what of this year's Belgian shop pumpkin displays?

BL - DREADFUL AS EVER. The hairdresser has a massive bloody marrow in his window.

Great article. I'm without a doubt enthusiasm for this one. I am in all actuality content with article quality and course. This post is right on the money in educational how some belief system applies to any content area. You're the best for protection tremendous stuff. I am amazingly a decent arrangement appreciative utilized expected for this place. Much obliged for assurance huge things. Visit here:best essay writing service

Take every chance you get in life, because some things only happen once
obat penghilang luka bakar knalpot,

Superior write-up! The write-up is quite worthwhile for my part and provides everyone countless thinking’s. You might want to support everyone take the place of to learn for example write-up utilizing foreseeable future. Right now, please click at this Best General Contractor Westchester County Consumers accomplished a spectacular endeavor apart from delight in a large amount just for getting your blog. Thank you because getting