I am writing this from bed, as per last post recommendations. It's the warmest place here, unless you join the squabbling throng in the 3 inches in front of the AGA. Until recently, this would not have been possible, the writing from bed thing, because normally I would have had to be nursing a dreadful coffee in McDonalds in Stratford Upon Avon if I wanted wifi, but now Tetanus Towers has been graced with the intermittent miracle that is BT Infinity.  I'm not actually sure how I feel about it, but downstairs all four cousins are serenely setting fire to each other's houses on Minecraft (? Is that even a thing you do on Minecraft?) and I'm in bed, so I'm not going to start pontificating about the joys of the disconnected life. Also, it's not 100% reliable, so I'd better hurry before a goat chews through it.

Also new at Tetanus Towers, THIS: 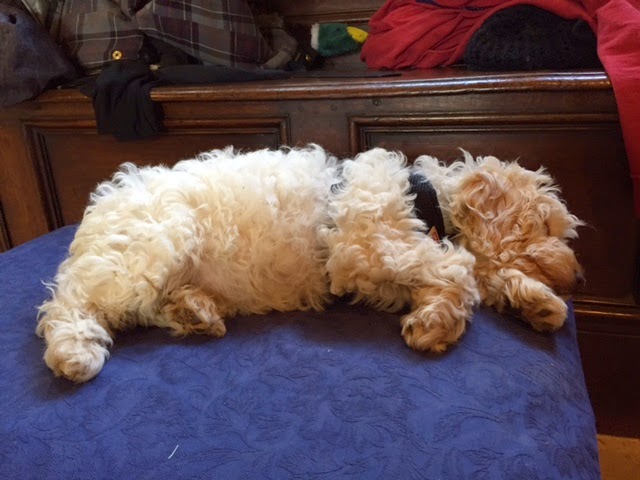 A ridiculous baby cockerpoo, belonging to my brother (reluctantly) and family (ecstatically).

"It looks like a mop head" said my father, slightly peevishly, on the phone before I arrived "getting progressively dirtier and dirtier." She's a very sweet mophead with razor sharp tiny teeth and an understandable fear of sheep. I only wish the weepette were here to disapprove of her sorrowfully. One day.

I suppose today is about the cousins. Every couple of months, my boys wistfully ask when we are next going to granddad's to do "apple pigging" and make "apple grumble" (English spelling still tops, chiz) and see their cousins, my niece and nephew. It's not very often -  we rarely come more than once a year - so when we do all manage to get together, the anticipation is great. Every time, I wonder if they'll still get on, whether my niece (6 months younger than L,  but so immensely grown up as both a girl and a Londoner and taller than me, let alone him) will tolerate all the laddishness; whether my nephew (a year younger than F) will feel left out. Every time, so far, the magic has worked: after a few minutes awkwardness - the bashful hellos, the kisses dodged, the monosyllables - something happens. The place, the familiarity of it all, the traditions (barn of deadly machinery, drain full of frogs, tasks imposed by my father for small sums of money), the dead animals and the apples and my father shouting and the constant danger of impaling oneself on something horribly sharp in the manner of one of those cautionary documentaries they used to show us at primary school does its stuff and they turn into a gang, again.


Gang apple pigging (did anyone read that picture book Apple Pigs as a child? I loved it): 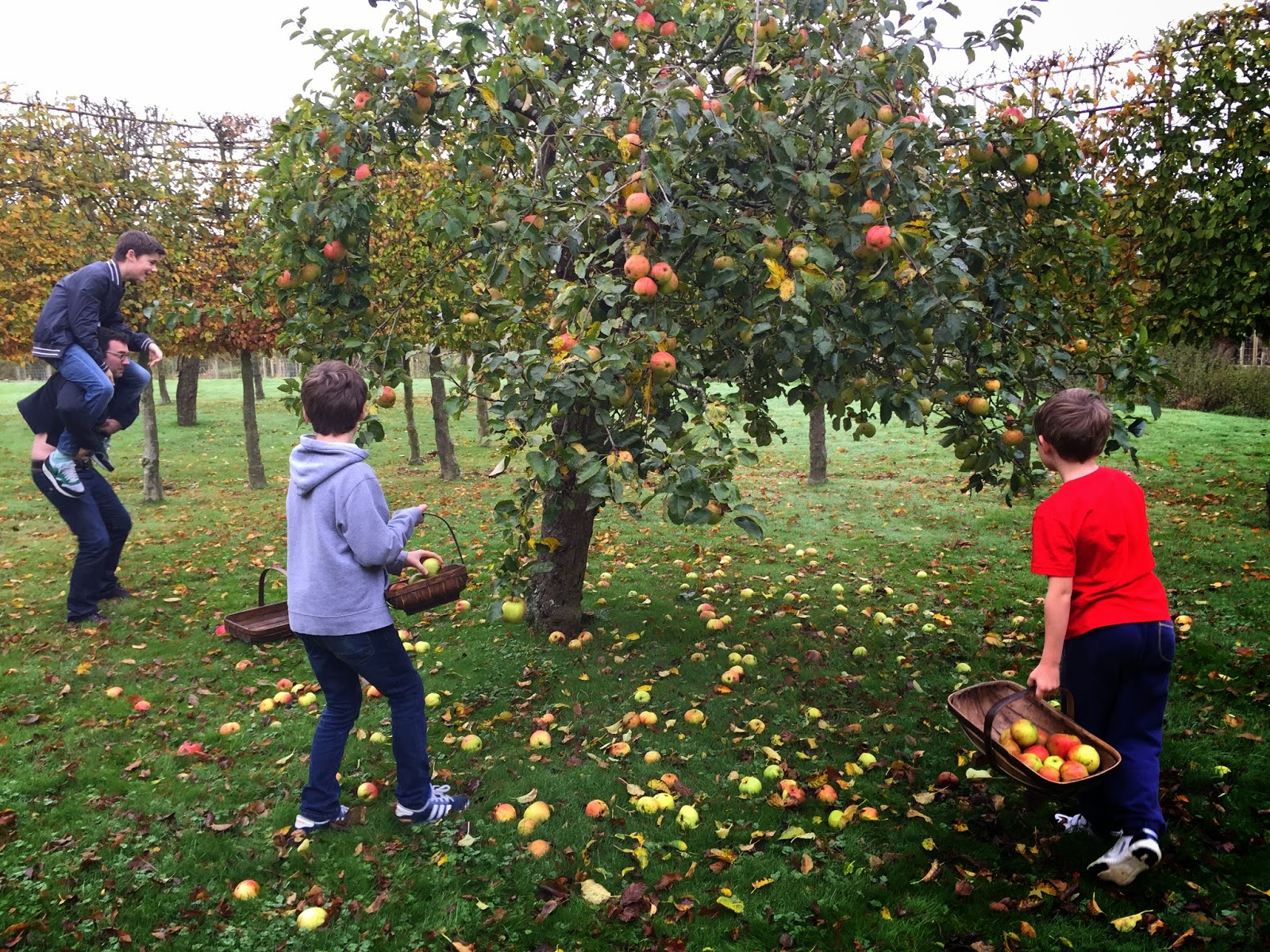 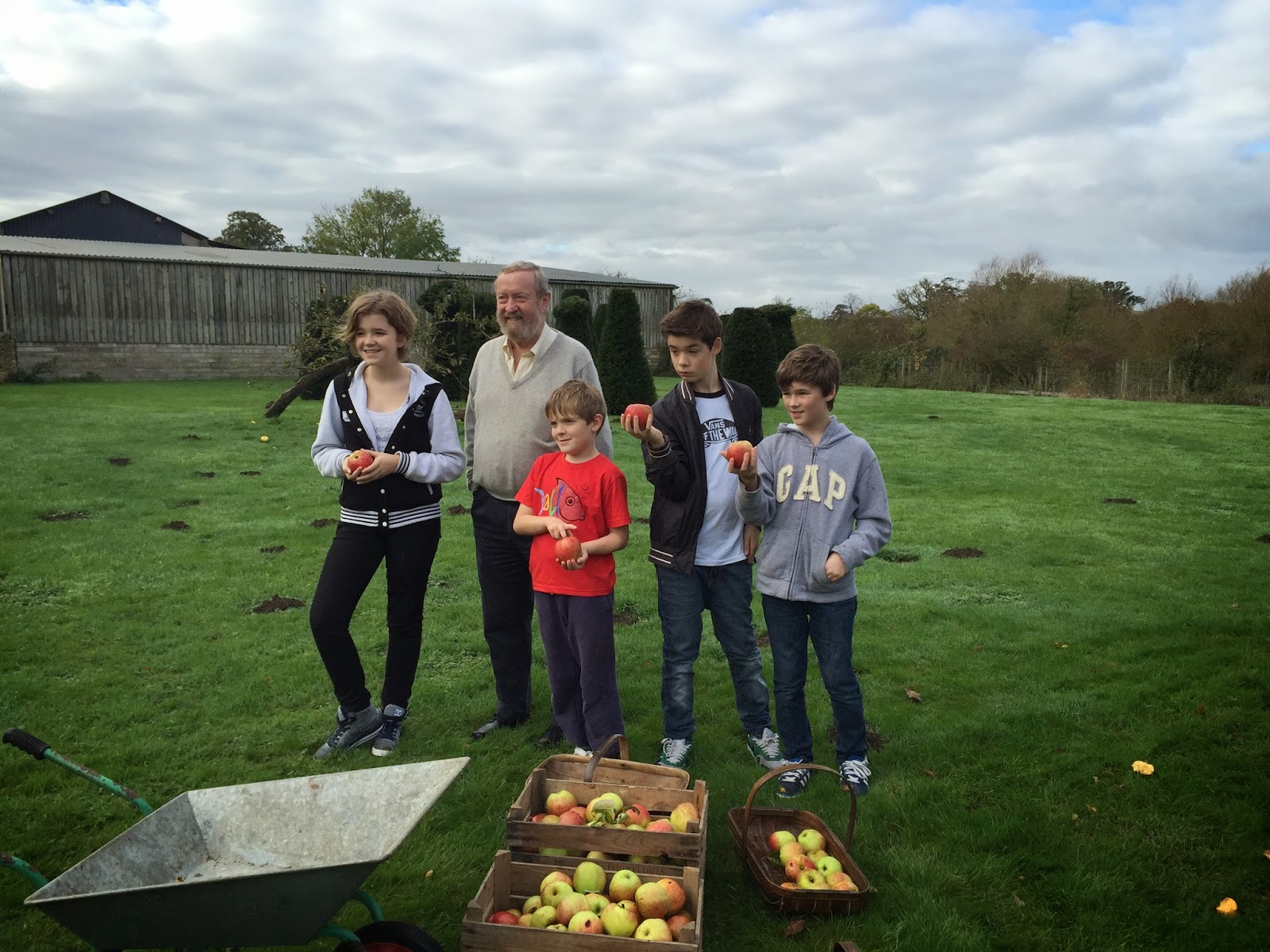 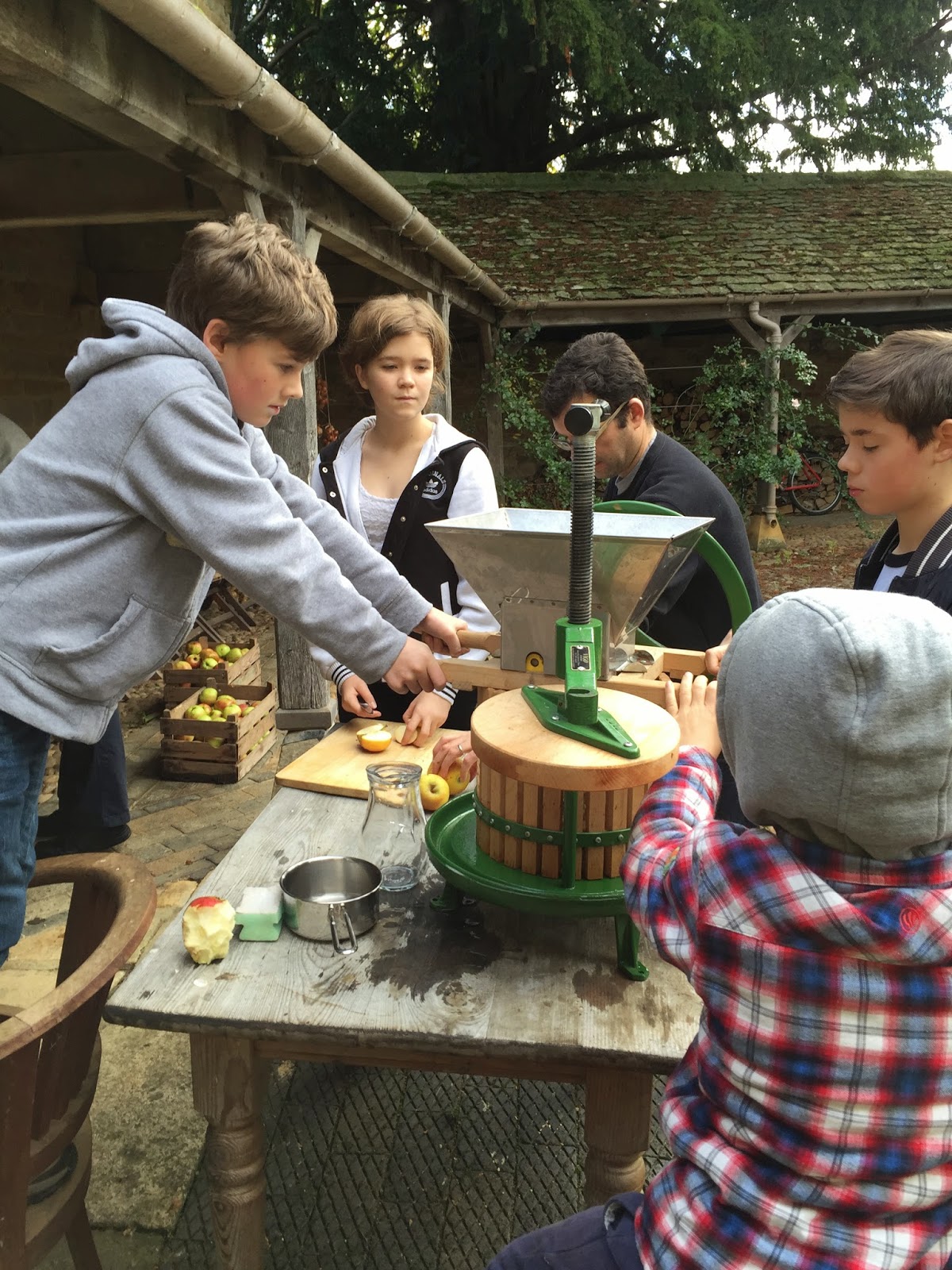 Half-gang at the funfair (4 "rides" the size of a paper handkerchief manned by furious teenagers) in Shipston on Stour: 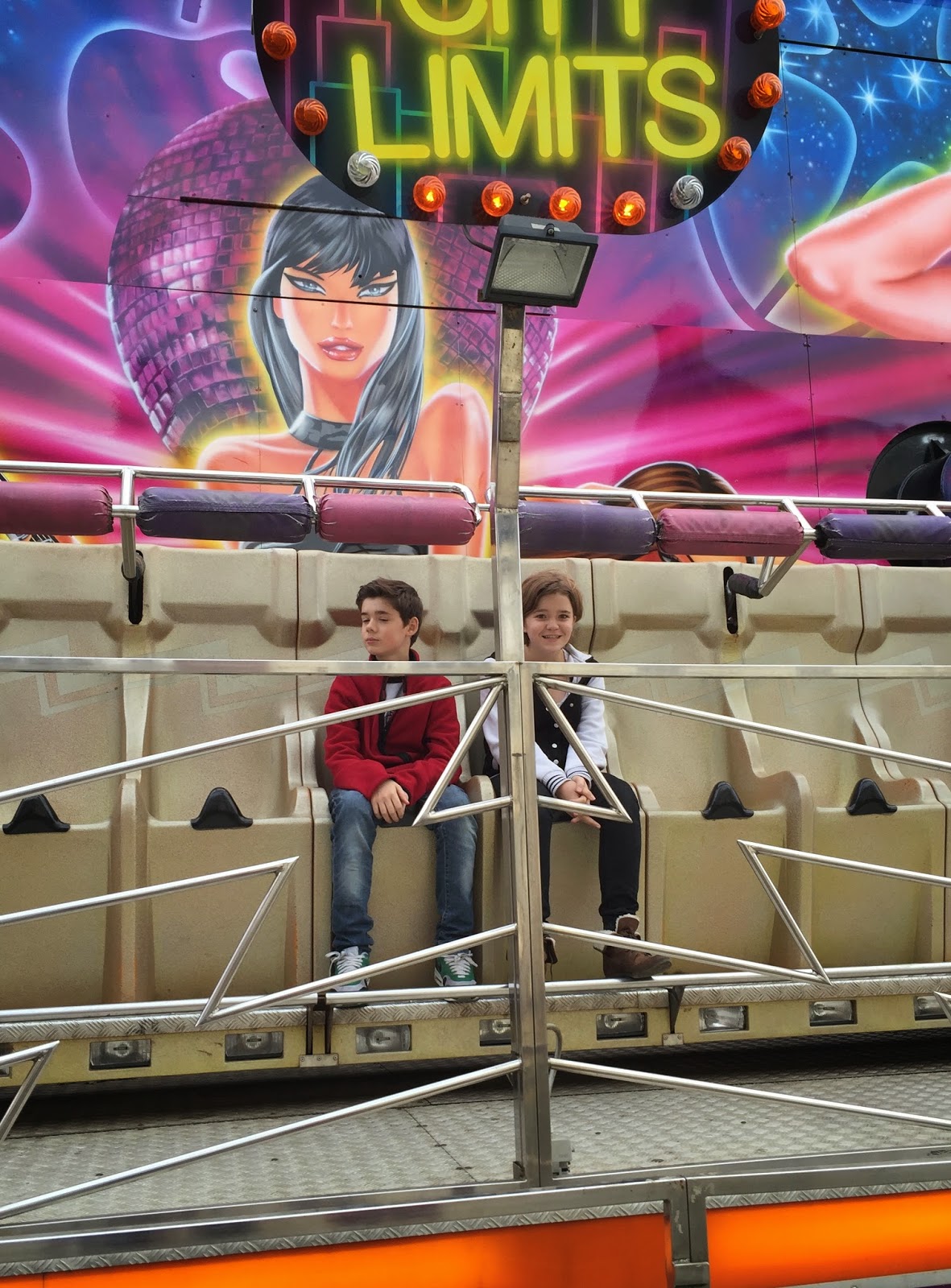 Incidentally who the fuck decorates these things: 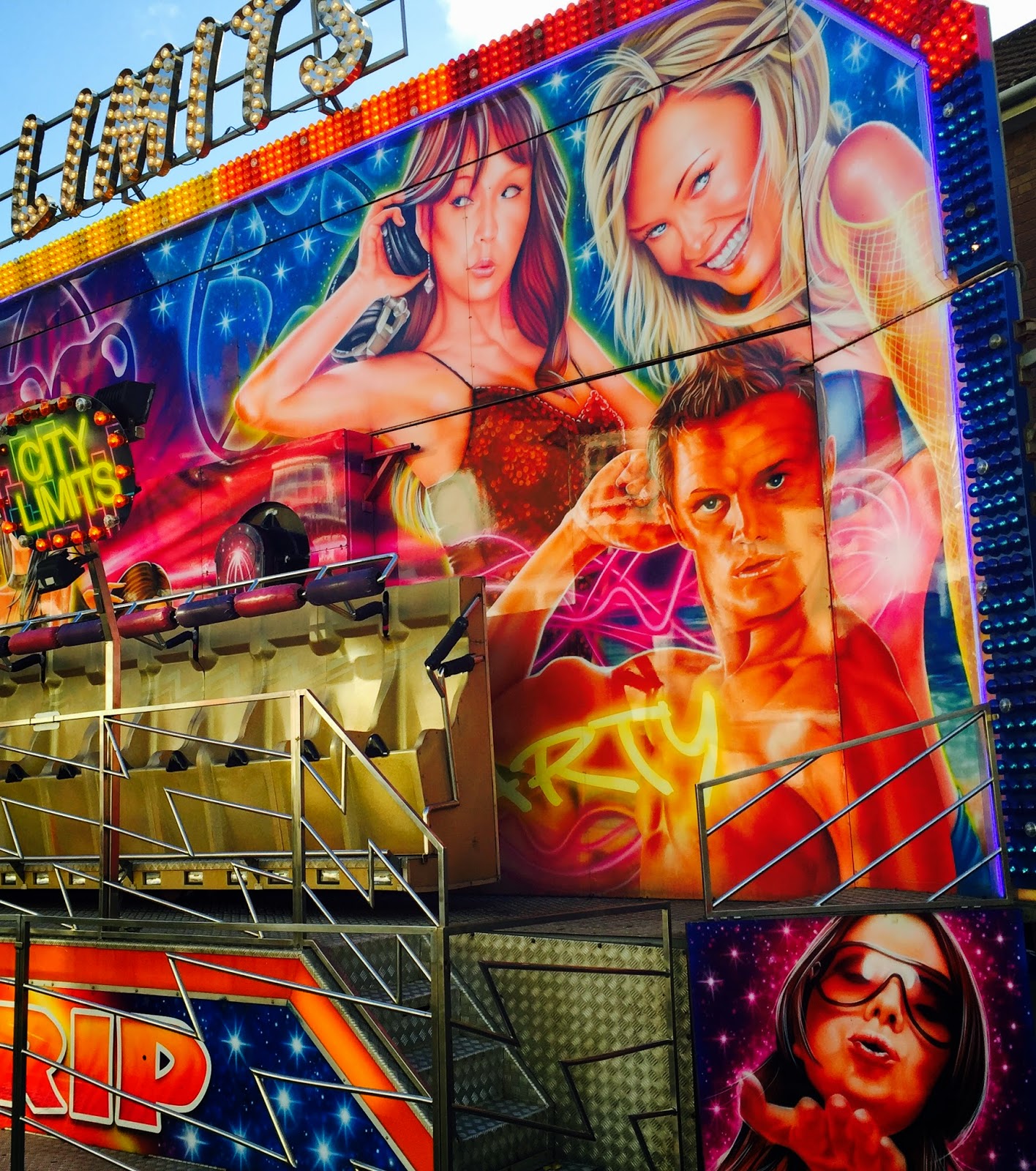 Thank goodness for cousins, both familiar and strange, never quite as annoying as your siblings. Did you have that with cousins? I did with some of mine (better still, they had ponies).

It is now late and I must sleep for I have the Sick and tomorrow my father is taking us on a forced march and later, we are planning to make cider. We have all the kit and everything. I can't imagine what could possibly go wrong.
Posted by Waffle at 00:07

Cousins are the best - siblings without all the rivalry. Encourage the contact - but not so much that they lose the magic.

I am in awe of the quality of your daily posts. Not sure about the cousin thing - I grew up next door to one set and went to school with them so there was plenty of rivalry between us all.

Wonderful post Waffle, and YES re cousins. Certain games and activities I only ever did with my cousins (playing dungeons and dragons). I think part of the magic is the association of the visits with the cousins with a special location such as Tetanus Towers as you so beautifully describe.

Oh god I LOVE when you lot go to Tetanus Towers - I imagine it being just like I Capture The Castle.

Cousins - mine were all much older or much younger and all lived about 400 miles away. But yes the exotic and familiar thing. I remember my big girl cousin making me a coca cola ice cream float when I was wee and thinking it was just the most sophisticated thing I could possibly imagine.

I'm so enjoying your daily posts.

A resounding yes to the cousins thing. As we got older, and two sets of cousins moved to London, we started a new tradition of “cousins get togethers”. These happened once a year when all 3 sets of cousins would get together for a day to eat, drink and play canaster (a game taught to each of us by our mutual grandparents). These gatherings really were great fun and full of a sense of fondness for one another. Of course, that phase didn’t last once marriage, children and house moves happened.

Having been brought up in Leamington Spa, I know McDonalds in Stratford well - pokey, dark place and best avoided! As for Shipston Upon Stour, my father loved that place. My only memory of it is buying delicious bread from a bakery, lol.

I love my cousins--one side we only saw once a year, the other, once a month. They are all lovely and I think I treasure them more as we get older and all our parents are starting to become elderly. It's like having extra people who can remember what your mom was like. Mine are all ages from ten years older to ten years younger, so we're always remembering different family stories and filling one another in on memories, etc.