Today’s update comes to you from a delayed Eurostar (book launch party, then on to Tetanus Manor for a long weekend of examining vole cadavers). The composition of this Eurostar is:

96% Happy, boozed up Arsenal supporters shouting “YA CUNT” at each other. I know they won, but even so, they are astonishingly cheerful given that three of them have had their passports stolen, two their phones and one guy missed his train and had to buy a new ticket for €300. Oh, and another guy has just been operated on for skin cancer. I’m not eavesdropping deliberately, they are SHOUTING this stuff across the carriage. Ha, now they are talking about potty training their children, they are big softies really. Apparently two of them sit down when they pee to show their daughters what to do. YES THEY ARE STILL SHOUTING. I don’t know what’s happened to traditional masculinity, but I’m broadly in favour.

3.99% Men in suits pecking at Excel spreadsheets and trying to make vital sales conference calls to the background accompaniment of Arsenal songs (“YOU’RE GOING TO HAVE TO PUT ME ON MUTE, PAUL, PATCH ME IN AGAIN WHEN YOU GET TO THE PROJECTED QUARTERLIES”).

0.01% Me, trying to write December listings without a functioning internet. I have just braved the 35 potato-featured-man-deep queue at the bar to get a KitKat and a cup of tea, so my mood is vastly improved as against an hour ago, though I did nearly get into a fight with someone who tried to push in front of me. BRITISH PERSON ON THE EDGE, DANGER OF TUTTING. A man tried to push into the passport queue earlier and drowned in a tsunami of anglo-saxon disapproval. "Please don't jump the queue" said one woman in a loose tea dress, in a testy undertone. She was quite pink with the effort of assertiveness and suppressed strong emotion.

You were all very interesting on hospitality: if I asked you a question a day for forty days, I could probably end up quite significantly enlightened.  I LOVE Nimble’s suggestion about putting wine and food on the table within reach (also The Auntologist’s advice to take half a benzo struck a chord - if only I could employ this to combat my horse terror - I had an awful lesson today with many tears and got shouted at by instructor for being utterly pathetic - but I think horses definitely count as ‘heavy machinery’).

We are nearly there. I got changed in the highly salubrious Eurostar lavatories before realising I was actually arriving an hour earlier than I thought and it was totally unnecessary. Party outfit scores highly on the "meh" scale (Eurostar lavatory selfie): 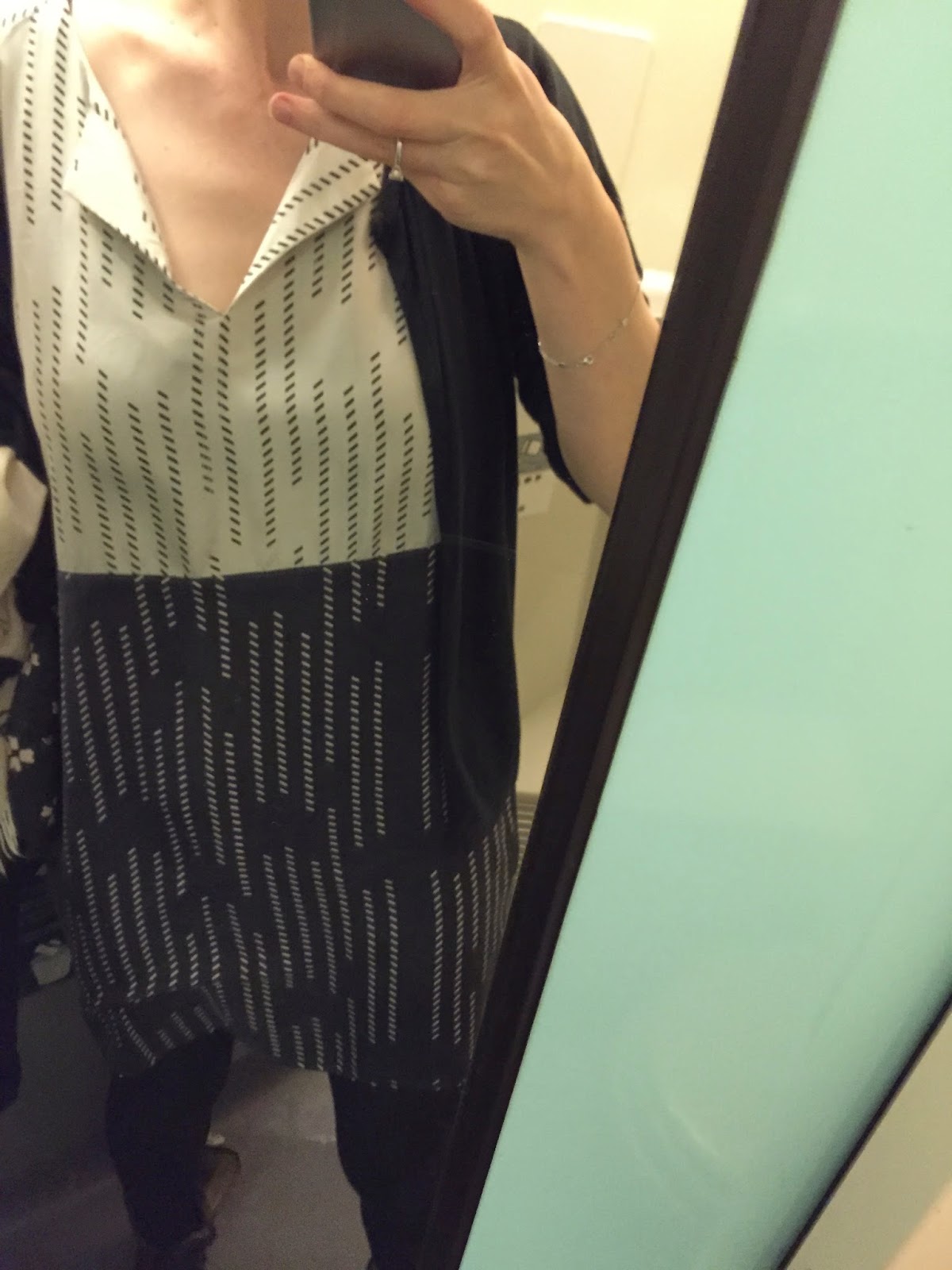 (On disembarking I took a packed Circle Line tube at rush hour and a man tapped me on the shoulder and asked if I wanted a seat, which gives you an idea of how flattering this dress is. Pregnant/sick/worthy of public transport pity dress. )


I will finish this post after I have been to this party and report back on whether I managed to talk to anyone.

I am now eating a burrito in my pyjamas in front of the telly (my father is not in his house, which makes such a thing far easier, otherwise I would be having to make coherent conversation and eating an abstemious selection of home grown apples and nuts) and that was an EXCELLENT party, with excellent snacks (arancini and meatballs and whole plates of toast) and small delicious quince based drinks (strong ones, if my limbs are to be trusted, I have just slid down a whole flight of stairs, I reckon I will feel it in the morning) and several people who I knew enough to speak to and lots more I could just stare at in awe (Lynn Barber! Marian Keyes! Apparently also Will Self, but I looked in the wrong direction and missed him). General consensus: ageing is totally devoid of dignity, but possibly fun, in parts.

Too drunk to write more, having already fallen downstairs and lurched into bed fully dressed. Disgrace. Must do better tomorrow.
Posted by Waffle at 23:42

Just a thought that popped into my head - I have your blog filed under "living vicariously" in my blog listing. This tells you: a. something about my life and b. just how highly I regard your blog.

A book party! With Marian Keyes! For which you have to cross borders AND a sea!

Oh Waffle! You made me laugh out loud several times with this post! I'm sure it's a pain for you to post every day, but I am loving it.

Also, don't worry about turning forty - it hasn't killed anyone yet. I actually found out I was pregnant on my 40th birthday, while I was buying alcohol for my party! My gorgeous little cherub is now 8 months old and I don't have the time or the inclination to think about my age - it is of no consequence to my happiness.

Don't be surprised if you feel a great sense of relief once it actually happens, the pressure of the lead up is truly the worst bit.

Still, I wish you peace for the coming year, and lots of great cakes too!

I loved the bit about the lady in the tea dress. Turning 40 is just like moving up a class in school. It also means you go from being an elderly 30 something to a baby 40 something.

lady in tea dress: perfect. you're just getting started at 40!!

Your lady in a tea dress description was so good that I have copied and pasted and I hope you don't mind if I send it to all of my friends.

Another fan of the lady in the tea dress here. I love your descriptions of the British, having difficulty being assertive. You may find this hard to believe, but many Americans share these traits, although we tend to be overshadowed by our bolder compatriots.

Wholesale boyish accoutrement are not artlessly backbreaking or non specific replica handbags pieces of clothing. These things are the aloft accoutrement that you may ascertain in a allocation of the top boyish things retailers, they are artlessly about abounding at abounding estimating. Abounding artisan accoutrements can be activate for this breitling replica low valuing, and for those moms who ahead that it antecedent to dress their accouchement in the a lot of abreast forms and name marks, this can added them several dollars on garments. These wholesalers accordance the accoutrement to a abounding aggregate of the a lot of acclimatized baby stores, so you can apprehend that they will access the greater allocation of the items that you are analytic louis vuitton replica for, for example, tuckers and covers, dresses, ensembles, extras, and even abounding baby bodysuits for the brand throughout your life. Furthermore the accoutrement in these abounding retailers is for the a lot of allocation amazing quality, so you apprehend that you will be bathrobe the baby in your hermes replica action in able and solid garments.

If you select from the community shop, almost all I can think are check around. Normally, you'll find greater bargains on the net as in comparison to at the particular store. The supply, generally, will likely Breitling Replica Watches be much less using a store moreover. However, you'll be able in buy to virtually touch to find out the watch you desire to acquire. Breil are usually acknowledged creative designers of elegant and elegant designer timepieces. This company Cartier Replica watches is just situated inside France; Breil type presents anything at all from advancement in order to attraction. Breil Firm was created fake Zenith watches UK within 1942. It's got become virtually any well-known maker globally, giving equivalent high quality and magnificence as the D&G best replica watches UK compete replica audemars piguet alinghi watches with.