Things I did today

(Not strictly in this order.)

Stood in a queue of about 60 people in the stationery shop that reached from the front of the shop right to the back in order to buy, among other things, a specific model of calculator then realised I had forgotten the slip of paper with the calculator reference on. Bought *a* calculator anyway. Forgot the scissors. Got the wrong length of ruler.

Tried to find a way to translate the expression "dans le plus pur style festif new yorkais" which didn't make me want to vomit out of my eyes. Failed.

Happened upon a parade whilst checking the price of a hot chocolate for an article (please admire my conscientiousness). It was composed of brewery drays with huge feathery fetlocks and vintage lorries. The horses were delightful. 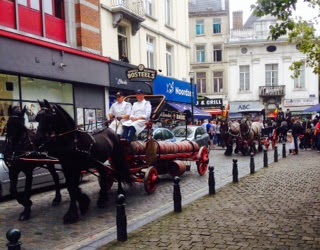 Being immensely predictable, this charming pony was my favourite. Watched a 1964 live Jacques Brel set in bed with a tilleul-citron like a pensioner (Me, like a pensioner, not JB. Brel is soaked in sweat and electrically intense in his good suit, with all his features too big and too expressive for his face and his giant tombstone teeth and you can't take your eyes off him).

Found and watched an episode of Father Ted I had never seen before with boys (stolen whistle). Father Jack identifies a bottle of Jacob's Creek Chardonnay 1991 just from the clinking.

Watched a short film of a dog dressed as a spider.

Left the new violin teacher standing on the step for 10 minutes because we were watching 'Marrying Mum and Dad' with the volume far too high and didn't hear the doorbell.

Discussed with the children what the headmaster's instructions as to his funeral might be (scattering of ashes in school dinners, pre-recorded 3-hour oratory, glass coffin in pyramid mausoleum in schoolyard?).

Ate many tiny things in puff pastry to celebrate the opening of our Picard.

Had a small gin.

Realised the dog had no food and it was too late to buy any and had to feed it roast chicken.

Sat on the sofa after the children had gone to bed and pretended to give an interview in French about a book I haven't written, but had written in the fantasy life I was living in that moment (it's not even the book I'm supposed to be writing). I think you should probably grow out of giving pretend interviews to a pretend TV culture show eventually, but I haven't reached that point yet. I'm only admitting this under the influence of a small gin and a large Lemsip. I was very articulate and amusing and perceptive.

Cleaned Nutella off the sofa.

Was it the Father Ted episode where they have a picnic and Fr. Ted tries to sneak the wine bottle out of the picnic basket without waking Father Jack? (And fails.)

Today took excruciatingly awkward barre class at my gym. There was only one other student besides myself, and when the teacher announced that she wasn't feeling well, the other woman said, "I don't want to be exposed to your germs so I'm going home." The teacher and I were dumbfounded, and then I had to spend the next hour doing plies all by myself under the intense scrutiny of the teacher.

Patience - Yes! That one. Oh god, the class thing is terrible.

Back from work trip to France; every stitch of clothing is dirty and I cannot seem to find some very important receipts. Eerily I remember quite well saying to myself, now put these away CAREFULLY so they don't . . . get . . . lost. Ha.
Threw moldy food away. Thought unkind thoughts about how stores are closed on Sunday in Belgium. Reprimanded self for these thoughts.
That is all I have accomplished.

Have determined there is *something* permanantly amiss about all our (admittedly decade-old) bath towels such that no matter how freshly washed they are, as soon as they have been re-dampened (say, by being used by a perfectly clean someone just out of a bath) they smell quite nasty. I suppose this means I should replace them. Is it wrong to give the old ones to a charity shop?

The child went off to play with a neighbor and returned for evening meal (prepared laboriously on hot plate in makeshift kitchen as real kitchen is under construction), only to wail that she wanted to stay with the neighbor and noooo that was not what she wanted for dinner noooo there are only three things (?!) and three is not enough things for her there should be some other thiiiiiiing mama noooo. Then mysteriously she sat down and ate everything almost just like a normal person. Curious. I was left feeling rather wrongfooted and a bit wretched anyhow.

Allegedly the work in our kitchen will be all done in just two weeks! Please let it be so.

I hope you had a cup of tea after all that activity! :)
Glad to hear you are translating, hope it's going well!
I worked (on an exceedingly tedious and seemingly never-ending translation), cooked, cleaned, tidied and supervised homework (those 5 activities on repeat at intervals). On Sunday morning, in a burst of totally uncharacteristic spontaneity for me (I am very set in my ways and tend towards inertia at the best of times, so to be fair it was actually a fit of madness that took over me), took part in a Zumba class at the gym, where I normally pretend to exercise, pedalling away at a safe, innocuous pace while reading the Internet.
In those 60 minutes I experienced a full spectrum of emotions (fear, anxiety, shame and self-consciousness, of course, but also the urge to laugh out loud several times, at the sheer implausibility of me (me?) being there and actually taking part in something like that. It seems ridiculous now, but by the end of the 60 minutes I was completely exhilarated and I felt as if something inside me had been loosened and freed. I will have to go again and see if this is a regular occurrence. The effect on my mood was amazing. I spent the rest of Sunday with a silly smile on my face.

Refox- in Australia, dog refuges take old towels- try an animal shelter to give them to!

@redfox: unbeknownst to you, Jane has been reading Nora Ephron's "I Feel Bad about My Neck": what she is going on about is Nora's Rule of Four (standard meat, starch, and vegetable PLUS something unexpected - like a plate of tiny baked crabapples).
She'll want you to get a round dining table next.
Hope that helps!
Annette

xox. And drat! I loathe round dining tables.

Called in to OR to sit and listen to a new mom scream whilst she tried to deliver twins sans epidural.

Read this article today and spared a generous thought for the poor red-tape averse man, afflicted by the same malaise as myself:
http://www.theguardian.com/world/2014/sep/10/former-french-trade-minister-thomas-thevenoud-failed-pay-rent-taxes
Then I remembered I never knowingly failed to pay any tax and I resented him a bit for getting away with it for so long.
And then I went about my day again.

Delurking to ask: what level is this maths homework? I ask since commutative associative things with an identity element tend to show up in UK _university_ courses these days ...

Hi Campion - he's 12 (not in some kind of super-advanced class or anything, bog-standard). They do things differently here, clearly..

Why only a small gin?