Bullied into buying unnecessary insoles to accompany regrettably necessary trainers in giant sports shop of despair, atmosphere electric with cheap nylon, minimum wage resentment and attempted shoplifting. Woman at the till furious I didn't "have anything smaller" than €60 for a €47 purchase.

Also had to purchase: 5 A4 folders, a set of dividers, a compass, plimsolls, a set of "feuilles quadrillées 1mm", 2 lumberjack shirts for eldest. On the list for tomorrow: €75 atelier, €20 to charge canteen card, obscure and very specific calculator, lots of other feuilles quadrillées, dividers, etc. etc. etc. I am ruined. It's no surprise that all my dreams revolve around my bank card being declined in mortifying circumstances.

Not unrelated: have taken on far, far, too much work and spend every day spinning between multiple tasks in probably quite inefficient manner getting increasingly clammy palmed and panicky. Anxiety peaks around 4, then children come home and suck me into a vortex of forms to be filled/fingerclaws filed/fights broken up/homework chivvied about/foods to be provided and so on, from which I emerge around 10, too broken to do any more work. It's not the best arrangement, though experience tells me that it gets a bit better after the first week, when the school runs out of pieces of paper to foist on you.

Disgusting rentrée cold has me in its clammy grip and I have had to take out of date Lemsip.

As I type the dog is standing in the kitchen staring at me accusingly for reasons unknown. This is a common occurrence. 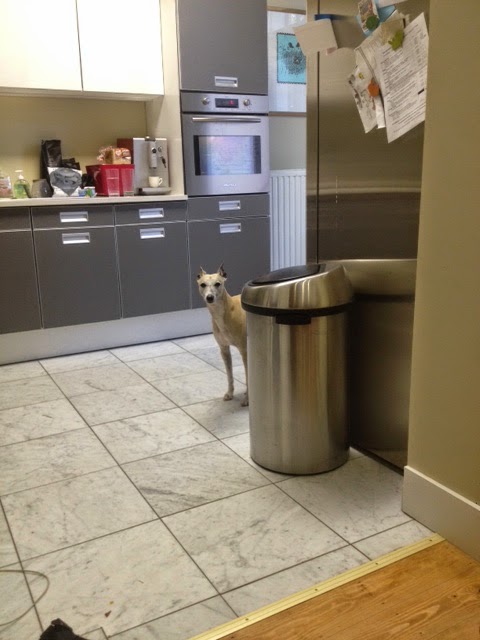 Worst cappuccino ever this morning served by woman with all the good humour, bonhomie and service skills of a king cobra. €2,90.

Rather than writing this list of complaints I should be translating a press release about a successful gallery owner half my age.

This afternoon a chicken came into the house and shat on the rug whilst my attention was elsewhere.

I also nearly got into a fight with a man who remonstrated with me about putting my neatly tied bag of dog shit in the totally normal bin on the street, the red mist only clearing when it became apparent he was quite mad and intent on filling the totally normal bin with a large sack of recyclable plastic bottles. A normal Uccle interaction, then.

Plumbing issues entirely unresolved except by the simple expedient of a regularly emptied bucket.

Chickens saved from the pot by INCREDIBLE egg laying rate currently. We have All The Eggs.

Eldest child spontaneously tidied sitting room. Both children being quite delightful and affectionate (and quite sanguine about rentrée), although youngest pulled my neck wattle and called me fat earlier and eldest point-blank refused to go to the chip shop.

Indeed, youngest child got a special gulag commendation for being the only well-behaved one at the commemoration of the liberation of Brussels, which is quite possibly the only accolade any family member has ever received from that institution.

Picard, my frozen food emporium of love, has finally opened at the end of the street, so all attempts at cooking, and all requirement to bribe eldest child into going to chip shop, can cease.

2 of my upcoming commissions are actually quite good and do not involve editing corporate reports.

The hippies from NerdCamp have finally admitted they do have my son's passport.

THE BATH IS FIXED. It has been broken for, quite literally, years. I am about to get in it with the dregs of a bottle of Aromatherapy Associates Deep Relax oil I was saving for a day exactly like this one and half a bucket of Epsom Salts.

400% plague-ridden (what, shut up)
20% bread-based meals
20% Disproportionately anxious
10% Too befuddled to add up
5% Maybe I need that special calculator
5% Is it bedtime?
4% Shit it was bedtime hours ago
4% Well, is it the weekend soon?
2% not that that makes any difference
2% at least I've washed my face for the first time this week
2% Must remember to cut child's toeclaws and get out swimming stuff tomorrow morning
2% and the €2 'religion' photocopy envelope, WTF is that for anyway, what religious photocopies do they need, they already have a whole young people's bible with jesus wearing a baseball cap.
2% No way I have enough brain for these Colm Toibin essays tonight
1% I'll just have another Nurofen and a rest my eyes.
1% Bleurgh.

You know what, Waffle, I haven't even read this post in full. I have got to the bit about school supplies and I am going to tell you - BEFORE I EVEN READ YOUR GLORIOUS WORDS [caps for full dramatic effect] - that you will make my day, cheer my soul, light my gloomy life and make me ever and always delighted that you grace the interwebs with your ponderings. I thank the gods for you. I too am flailing in the misery that is September with school-aged kids. I have thus far today attempted and failed to remember some Spanish, deciphered a spectacularly dull short story and stared at mathematical equations until I had to accept that me and sums parted company just a little bit after basic subtraction. Then, insult to injury, the sodding 'futur proche' came leering round the corner and left an entire family in tears. T. S. Eliot got it wrong: September is the cruellest month. Though you make it ever so much more bearable.

Now I'm off to read your words and feel lots better.
Thou art magnificent.

So it is once again confirmed that "rentrée" is a much bigger challenge for parents than for kids. Where I would have just ranted along, you have found some wit and fun. Thank you and, as said above, hang in there!

1. If scaffolding was a medical procedure, we'd have a colonoscopy next to and over us right now (not that I'd know). So, yeah, am pretty much like Martin Sheen in Apocaplypse Now, or Kafka, as drawn by R. Crumb, at the moment. However, they are a real company and doing things the proper way, unlike the dilhole next door. I appreciate this, as I was trained to do.

1. Watched a documentary about Louis Kahn, it involved a lot of adultery.

He died in Penn Station on the way back from India, not identified for three days, because he crossed out the address on his passport. Seriously, Port Authority? You had the NAME of a major 20th century architect, but were stumped because you didn't have his address?

2. I saw a freaking ijsvogel this morning...from the living room. It even flitted into the water briefly, as that's where the food is.

I was laughing so much at this entry that a colleague came in and asked what was so funny. Quoted the king cobra bit just to give him a taste of your genius.
Tilia

My favorite percentages EVER. And this: "Plumbing issues entirely unresolved except by the simple expedient of a regularly emptied bucket." YES. Here, too.

Hah! You reminded me of the tyranny of "Haben Sie 'was kleineres???' (when you handed over 15 DM for a 14.97 DM purchase). My final back-to-school EVER has been relatively painless due to a) kid having achieved some degree of independence; b) kid completely ignoring paperwork; c) me completely ignoring paperwork. PS: your dog has the same nose and eyes as mine, though otherwise completely different (mine is a shaggy, enthusiastic terrier).

But the kitchen looks good!

What is it with Europeans who hate to give change? One of the first things I did after arriving home from a two week stay in Rome was to buy a gallon of milk with a $50 bill, simply because I could and because nobody would fret at me.

Ha Ha! This is MY LIFE! (Apart from the chickens. And dog. And cold. Cold no doubt imminent therefore). Thank you for making it all so wittily amusing.