Here we are again

Oh dear, it has been ages since my last confession. That is because:

(a) I had (indeed still have) a shit ton of work. I keep saying yes to things to which the answer should be "regretfully, no, especially at that price."

(b) I escorted my eldest son on a tour of London last week which was highly successful, if ruinous, with some light shopping (for him), a smattering of culture and some heavy eating (both of us). The least successful bit was the obligatory trip to Hamleys where twenty minutes in the basement made me long for easeful death. The most successful bit was the bit where we STROKED THE OKAPI. One of P-Waffle's new jobs is being President of London Zoo, you can imagine how little that interests us as a family, we do not care about that kind of thing at all (I have basically been hyperventilating solidly since he told us, and that was about 8 months ago).

L was allowed not only to feed and stroke the okapi (velvety soft, not as shy as I expected and fond of willow branches), but also to hold a rare rhino rat snake or something (weird looking green yoke with a big pointy nose), which whilst it would not float everyone's boat, was a massively exciting moment for him. Also, and this was equally exciting for both of us, THE GIANT TORTOISES. Thus: 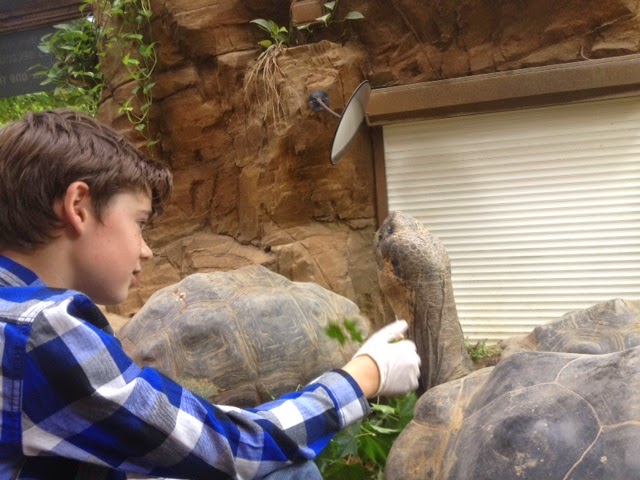 The giant tortoises rise up on their leathery wrinkled legs when you touch their shells, a reflex called The Finch Response  to which, in the absence of the parasite removal skills of the Darwin's Finch, the appropriate human response is a vigorous neck scratch. Happy to oblige, my magnificent leathery friends. I got a bit emotional at several points at the magnificence of it all.

On the train to London, I received a Eurostar text message customer survey, which I handed to L to complete. This was the result: 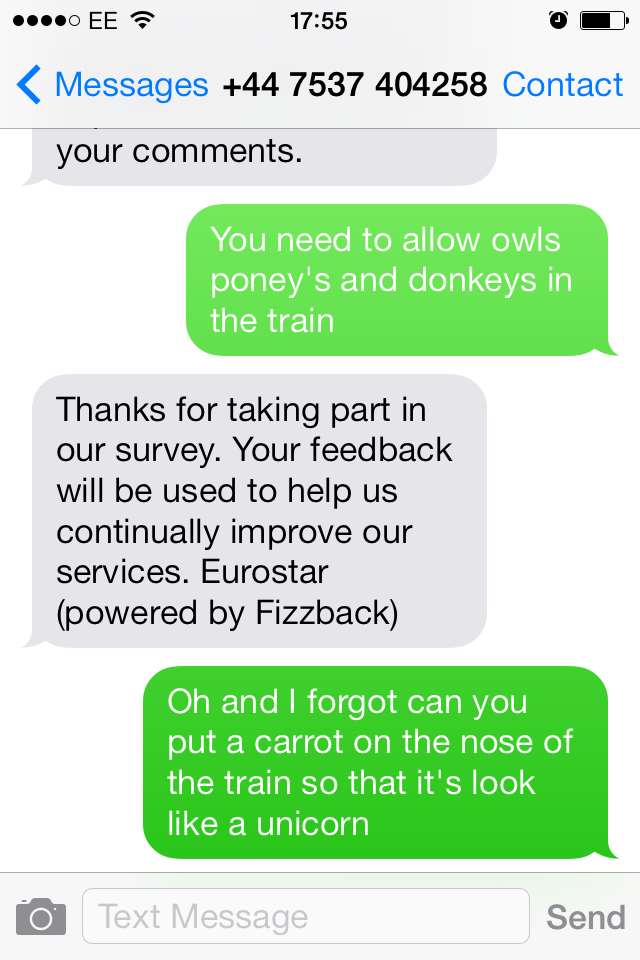 I have soundly beaten him for his grocer's apostrophe, but otherwise the content and form of his responses were very pleasing.

(c) Apart from that joyful interlude, it has been my least favourite bit of the year, the crap leftover bit at the end of August when you know all the fun is over but the rentrée, with its psychic balm in the form of self-adhesive plastic film, new jumpers and LISTS is not yet there. I cannot think of a year in living memory when I have felt fully sane and in control of my emotions in the second half of August and this one was no exception, coming as it did with an extra load of building work, endless sanding, leaking boiler, wallpaper hung upside down, mislaid paperwork, galloping rootless anxiety, etc etc etc.

Thankfully, as of this morning the rentrée is now officially here and I have already been able to start channelling my difficult emotions into the soothingly repetitive task of writing down the dates of my children's latest tetanus shots seventeen times on seventeen different forms and covering awkwardly shaped exercise books in plastic film. L started secondary school (they move a year later in Belgiana) and I found this morning immensely stressful, to the point of getting actual chest pains: I thought I would have failed to fill in one of the essential forms in 8 point Times New Roman, or missed some crucial instruction and that he would not be enrolled, or that he would hate it and not know anyone or that any manner of other disasters would befall him. Thankfully, he was totally laid-back and mature about the whole business and sloped off in a slightly sinister-looking gang of pre-teens this morning without a backward glance, which is exactly as it should be. I was so choked up with idiotic parental pride at my gigantic, gentle, child, I had to go and sit in the garden with a quiet cup of tea for ten minutes afterwards and watch the chickens behaving ridiculously when I should have been editing a travel agent training programme.

His brother was so profoundly unmoved by the whole rentrée scene that he managed to depart for school without even telling me, leaving me bleating pathetically at an empty house. I did however manage to force both of them to submit to the Traditional Rentrée Photo: 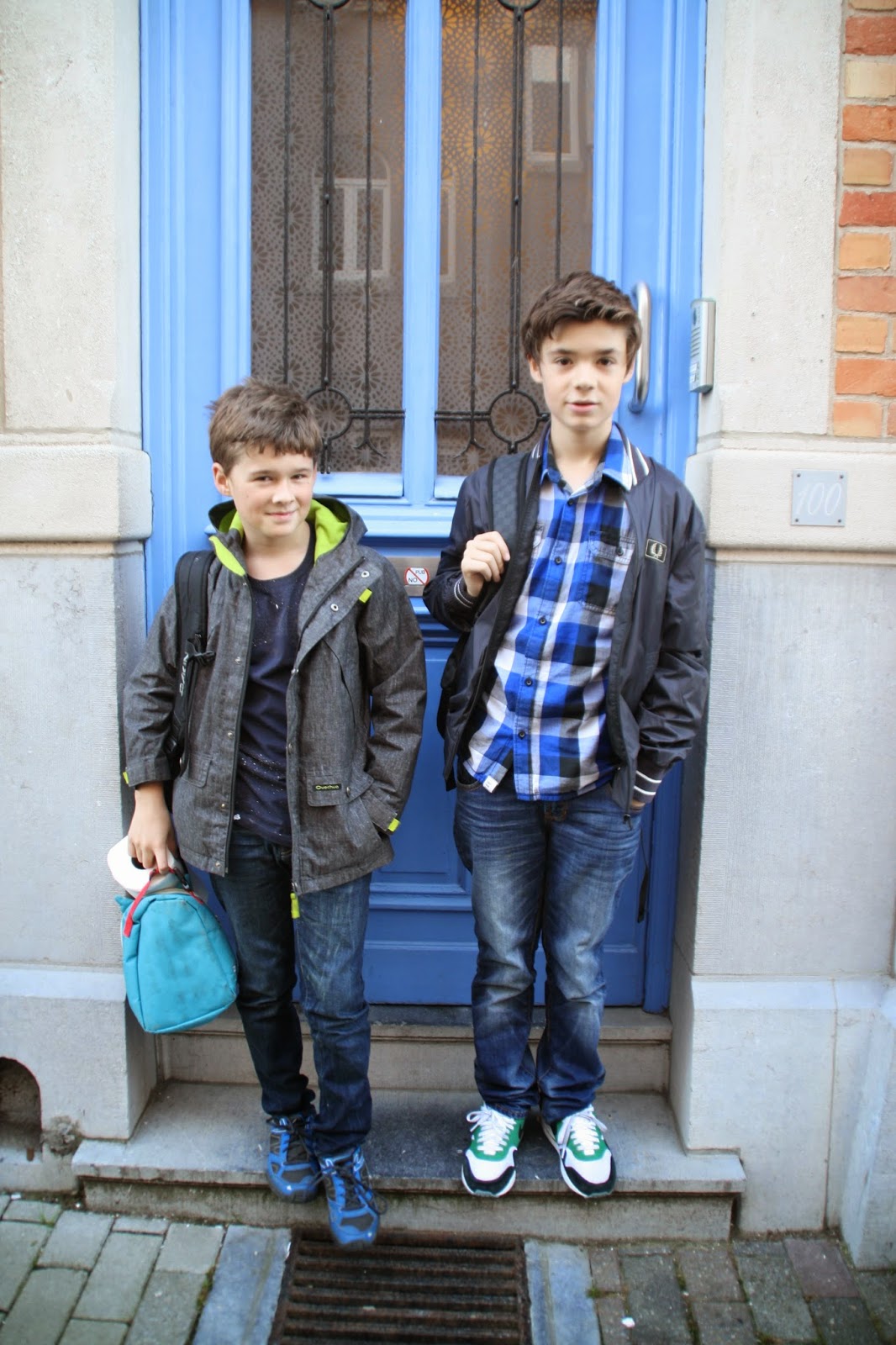 I love F's expression here. He also seems to have grown up alarmingly over the holidays. He only came back from Science Camp on Friday afternoon, perhaps they were synthesising human growth hormone over there, he has been quite cagey about the whole thing and it was very rainy for the whole ten days, so I suppose they had to find indoor activities.

So here we are again. Another school year. An eldest child now grappling with both Latin and Catholicism (I wonder if he will remember not to call Jesus 'Nathan', unsure). A younger child .. well, who knows. He has not got any less secretive over the years, so I do not expect I will ever find out. But soon the black opaques can come out and the fire can go on and I can sink into the dark and cosy sufficient unto itself hygge-ness of proper autumn. Phew.

How are you? Cast into gloom by impending autumn or cheered by conkers and grey flannel?

I enjoyed reading this immensely. Your sons look decidedly lovely. I'm going to be a secondary teacher next year and so look forward to my very own gang of slightly sinister teens. Delightful.

I am, as always, immensely cheered by your posts.

I love early September and its promise of a new start.

Your boys look lovely but no school uniforms?

Ganching - No, no uniform at any age or at any part of the Belgian (or French) state system... Well, L now has a skool swimming hat, but that is it.

I wish I had the guts to send Eurostar messages like that! :)

Oh, this made me smile. Laugh even - cue strange looks from colleagues.
Also manage to ruin the late summer with the looming spectre of dark nights, dark mornings, and cold wet weekends. But it's going to be an Indian Summer apparently, so not all bad.

I on the other hand am loosing my daughter to the wilds of a Scottish University.This means , rather disturbingly, that I will have start to to converse with my husband. Dark days indeed...

Staving off post-holiday-reentry depression by focusing on finding more paid work. Which in itself would be depressing as well if I took long enough to think about it.

Your boys are gorgeous.

Dear Waffle, your boys are indeed gorgeous and seem to have inherited a great sense of humour. The best thing about the rentrée is that the return to the routine and all that goes along with it means regular reading of your blog during self-imposed breaks from work. This week is being very hard as I try to adjust to work again.
Not feeling very eloquent right now so this will probably come out mangled. I just wanted to say that your blog posts seem to adjust the lighting of my days, making everything so much brighter suddenly. Warm fuzzies!

Why is the L holding what appears to be a roll of loo paper? Do they have to take their own? The mind boggles.

Megan - Ha, it's kitchen towel. Which for some reason is an imperative requirement. I have no idea what they use all those rolls of kitchen roll for, possibly they resell them to a cash & carry.

good functions that any of the other media application mobdro tv online it will certainly reveal a fall food selection, there pick File Manager best.