Ten days have gone by and I have failed to commit my numerous complaints to html. Only shreds remain.

On Monday everyone forgot all their stuff and woke up late and the pre-school morning horror slot plunged to new depths of crapness, with farcical up and down the stairs nonsense (everyone), backchat (them) and shrieking (me). At one point I opened the door whilst still shouting about something and came face to face with the next door neighbour who was also red faced and shouting at her two boys. We shared a brief glance of fellowship, which was nice.

On Tuesday, I went on a simultaneously hilarious and terrible expedition to a mainly empty Brussels nightclub  for work, where a strange woman followed me round for 40 minutes, then a man tried to teach me how to lindy hop with predictably catastrophic results.

Me (panicky waving gesture): Ah, non non non I have the two feet left. Have pity.

On Wednesday I went to London and my father got me drunk in a hotel that brought you trays of cheese on toast soldiers with your martini and showed me pictures of pygmy goats. Imagine! Giant gin martinis, deep sofas and spicy cheese on toast. Why would anyone ever leave (lactose intolerance?)?

On Thursday I spent the morning in a legal focus group faintly and deservedly hungover and bought The Paying Guests as a treat in the afternoon, then read it, eating a salad in a disgusting fashion on the train. There is no good way to publicly eat salad with a plastic fork, is there, you (I) invariably look like something David Attenborough might examine on screen in fascinated revulsion. The Paying Guests is great.

On Friday... um, work? Lots of work. And pizza. Always pizza on Friday. Oh, and the neighbour resurfaced after his most welcome African trip. I have not missed his combination of saxophone and shouting.

I loved Saturday. On Saturday L and I lay on the sofa for about 4 hours reading our respective books then in the evening we all went off to the special late night opening at The Scary Bat Caves. This was an excellent, highly eccentric event with Pikachu paper lanterns: 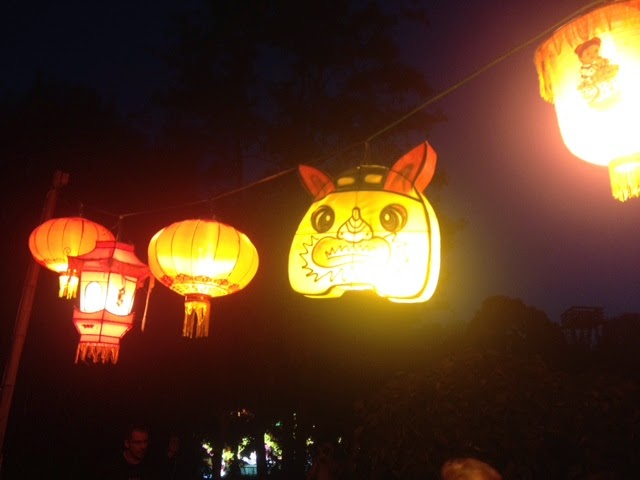 elephant bathing and AT LAST FINALLY A VIEWING OF THE BELGIAN PANDAS, Nice Nice and Shining Star. L took me some pictures so terrible - it was very dark - that you really can't work out if it's a panda or a trick of the light. I sent the one half presentable one to M who wrote back "that's not a panda, it's a drunk in a panda suit" which was harsh but understandable.

It was this picture: 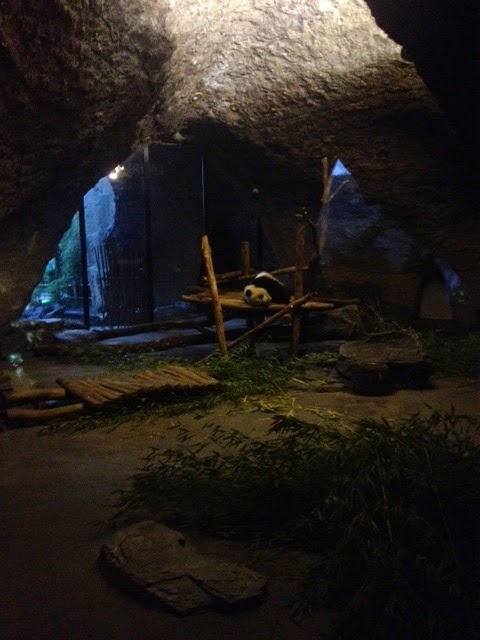 Frankly, this sheep in a manger makes about as good a panda as the real panda: 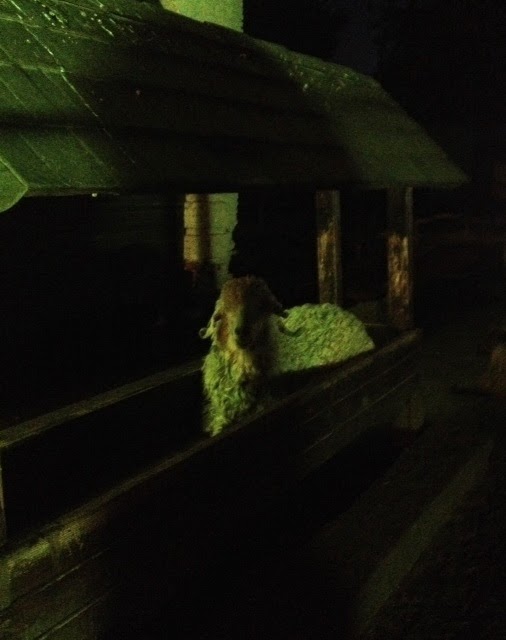 Nevertheless it was highly satisfactory. The bats were INSANE, dive-bombing tourists and getting tangled in hair.

On Sunday nothing, for 'tis the will of the Lord. Or rather, we were all quite tired and cross. There was a fight about the dishwasher and when we all made up, grudgingly, we went to check out the new Brussels Ladurée (gilded tart boudoir) and sat on the sofa watching recorded crap telly and eating macarons, then went out for prosecco, altogether like the kind of coves who would be first in the tumbrils come the revolution.

On Monday again: no, I have nothing to say about that, it was just another fecking heap of work. Same today.

20% desperate for a pudding or possibly a drink
20% forced to settle for chocolate buttons
15% too tight bra
10% potato face
10% Congolese slang (work)
10% Unspecific guilt at things undone and forgotten
10% Unspecific dread at upcoming things that must be done.
5% Don't Tell The Bride

Oh Waffle. Your dialogue with your dancing partner is the best thing I have read in a while. Thank you! (Was his name Govidali? My password thingies are Govidali suffered)

I am really not a bad dancer but I suffer terribly from performance anxiety in anything faintly resembling a try-out or class. The I have suddenly got at least four left feet. Many drinks and then mad dance floor at a party - give it away!

Present: Following rather disastrous general election Sunday last everyone - including my mother which vouches for something indeed - is preoccupied with who is going to form the new government and with whom and also how we can continue to disarm and paralyze the nationalists who got a f*****g 13 percent of the vote. FUN INNIT!

Yes, and following long leave of absence I have to make up for lost hours - long story - so I'm on answering service at the parliament which can be rather hilarious at times. - "Who do I speak to about my recipe to end all wars?" - "Who are the leaders of the political parties?" (Me: Have you tried the internet?) - "It's not there."

Roffling at the image of you reclining indolently on sofa eating poncy macarons. Lovely way to spend a Sunday.

If you like Don't Tell the Bride, may I recommend Bad Bridesmaid, a new reality show in which Horror Bridesmaid is planted in the middle of wedding preparations, with collusion of bride but not other bridesmaids, with predictably hilarious consequences. It was v funny, but maybe just because I find almost anything hysterical when the alternative is yet more indyref coverage. The entire country is completely hysterical, but in a different and really not very good way.

I really, really need to know the name of that hotel so I can partake in martini and cheese on toast.

Percentages:
60% feeling itchy because the girl who sits next to me at work has been signed off with chicken pox
15% trying to finish The Little Friend so I can read Gone Girl before the film comes out
10% OH GOD I NEED A HAIRCUT
10% considering getting a credit card so I can plac an order from Sephora that I can't afford
5% can't stop eating biscuits

90% Not at all moved by the fact that we are made of "stardust"--yes, elements, and you thought you were made of...?

10% Absolutely floored that stardust can somehow transform itself into disappointment. Whoa.

Still better than my last 10 days. I need/want a haircut, too, but my sweetheart says NO!! God....

This is a comment of fellowship from one red-faced, shouting mother to another.

very interesting information, I really like it because it can add insight for me more broadly, thank you very much for this
extraordinary information
Cara Membuka Saluran Tuba Falopi Yang Tersumbat Tanpa Operasi,