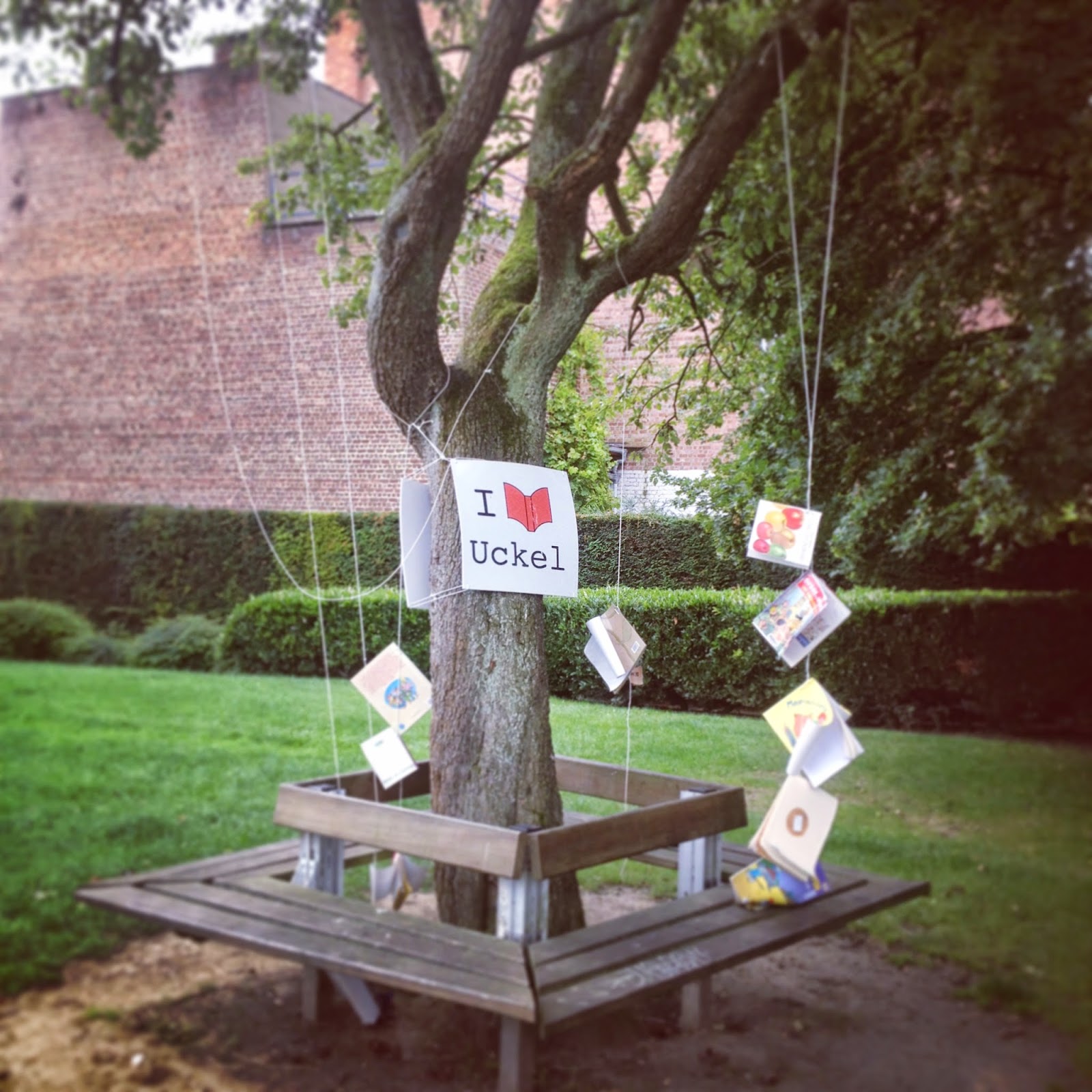 Hello. I have been back for ages (well, since Saturday, it just feels like an eternity), but was immediately sucked into the post-holiday maelstrom of overdue bills and overdue work and overdue washing and renewed lamenting at the builders. Also, until today when I despatched F to NerdCamp (the Jeunesses Scientifiques or Scientific Youth, which sounds faintly terrifying, or like a post-punk band), the children had no gainful activity with which to occupy themselves (L still doesn't, he hasn't dressed or washed for 3 days, I think he is turning into a sort of pre-pubescent Father Jack Hackett: "JUICE" "MINECRAFT" "SNACK") and instead spent their every waking minute being complete dicks towards each other. It is awful to be back, I am not going to try and spin this positively. You'd expect nothing less from me, I know. 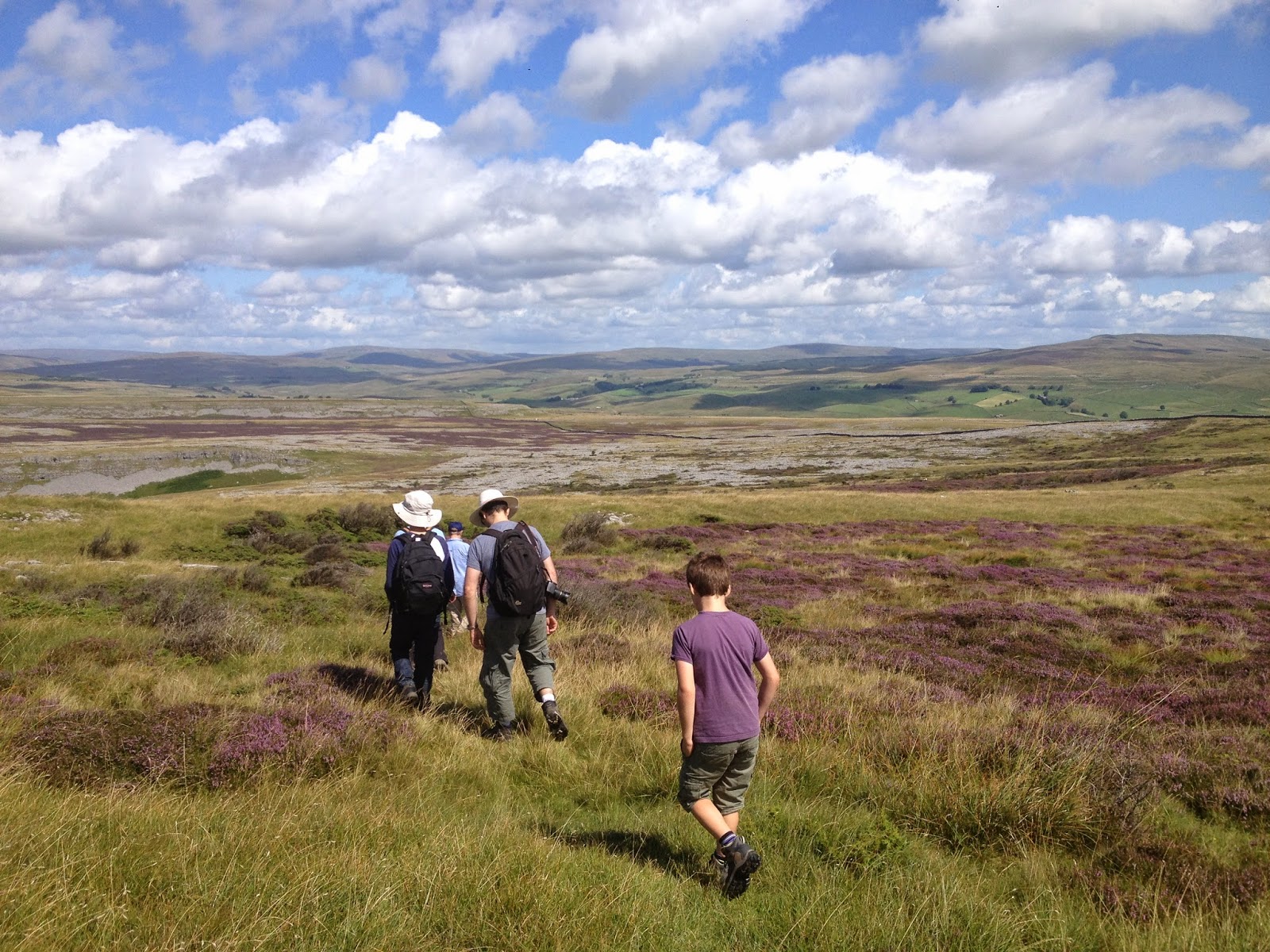 And this (view from house): 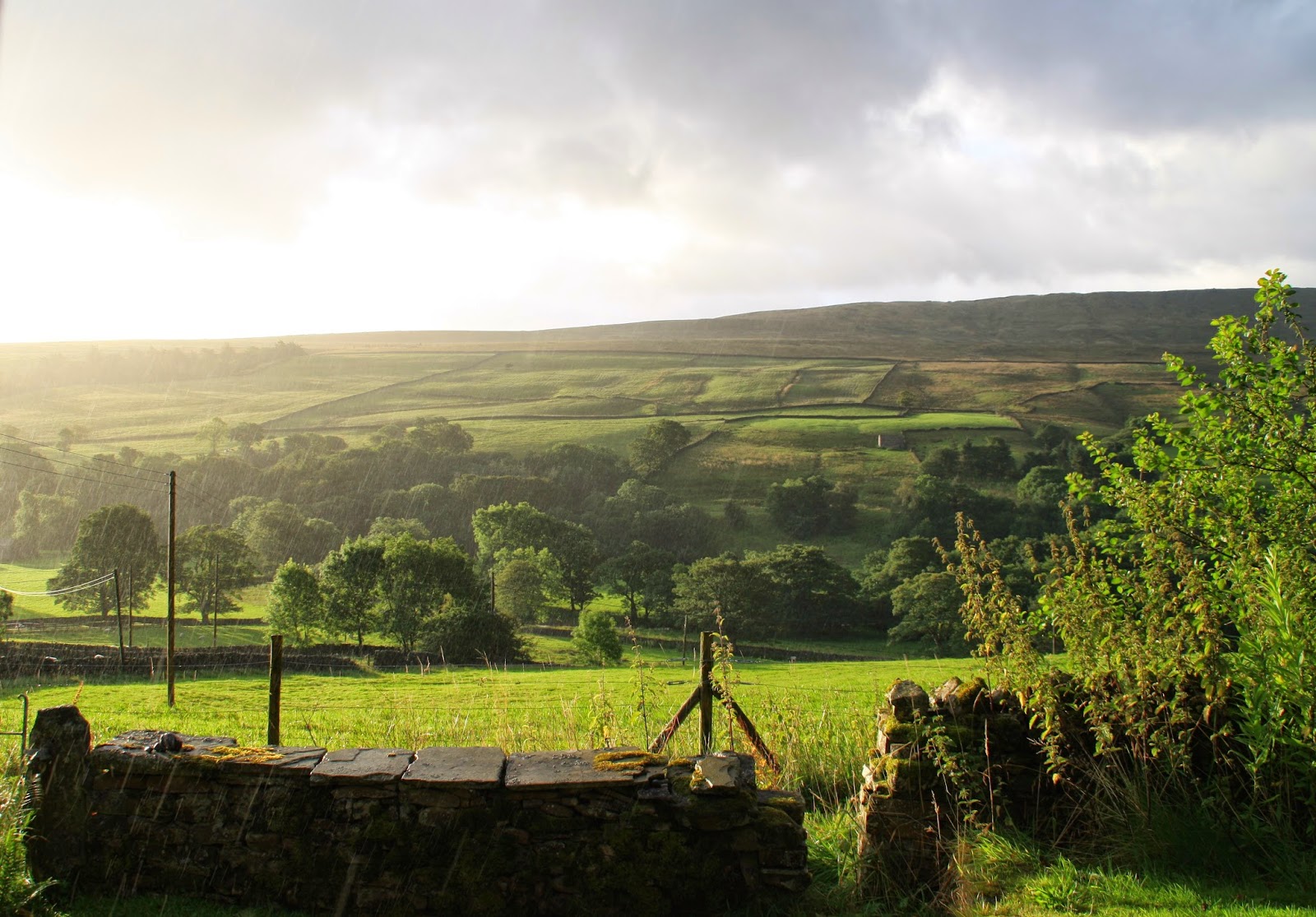 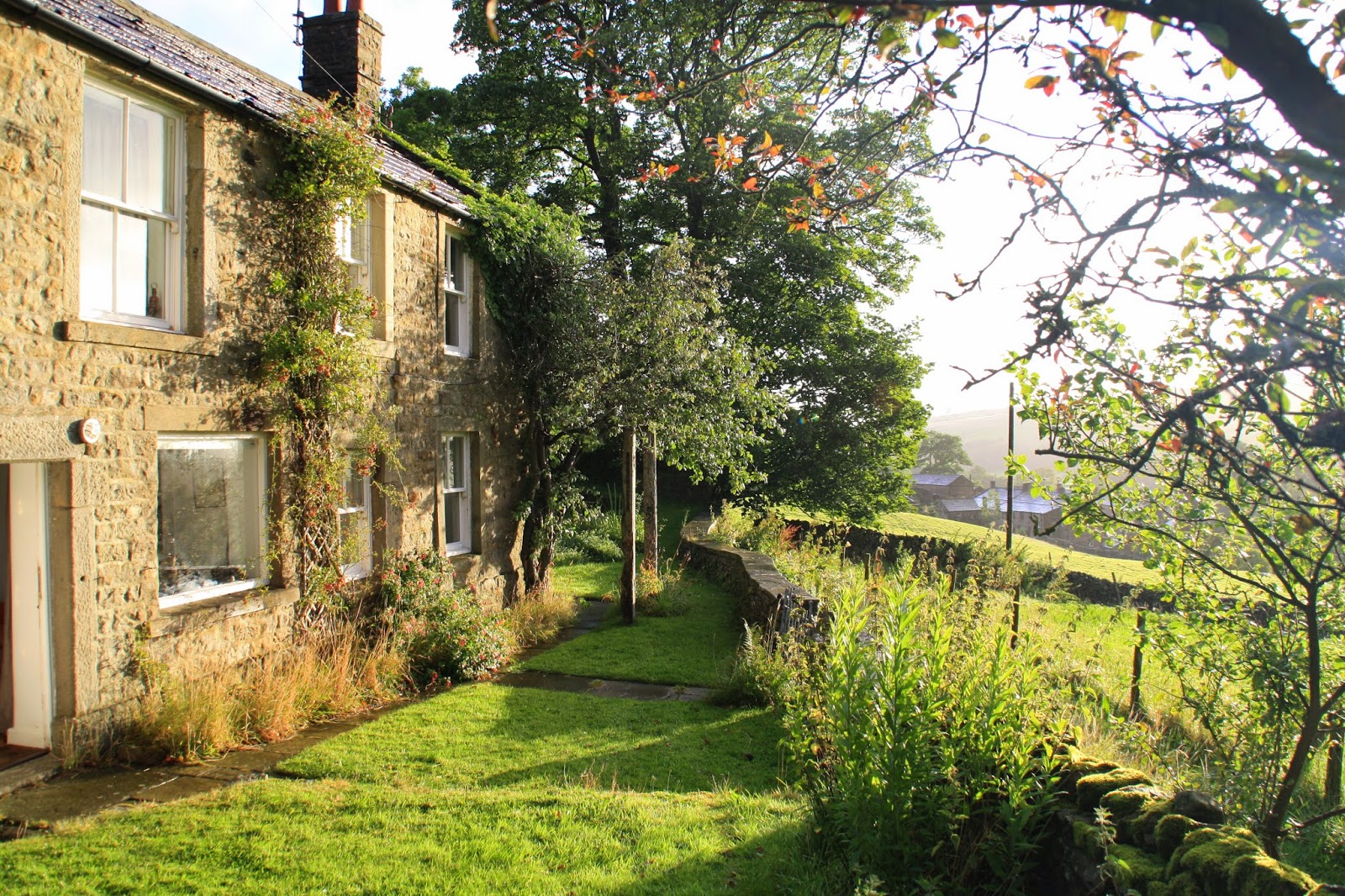 House still looks like this, but with more builders and a gathering atmosphere of impotent fury: 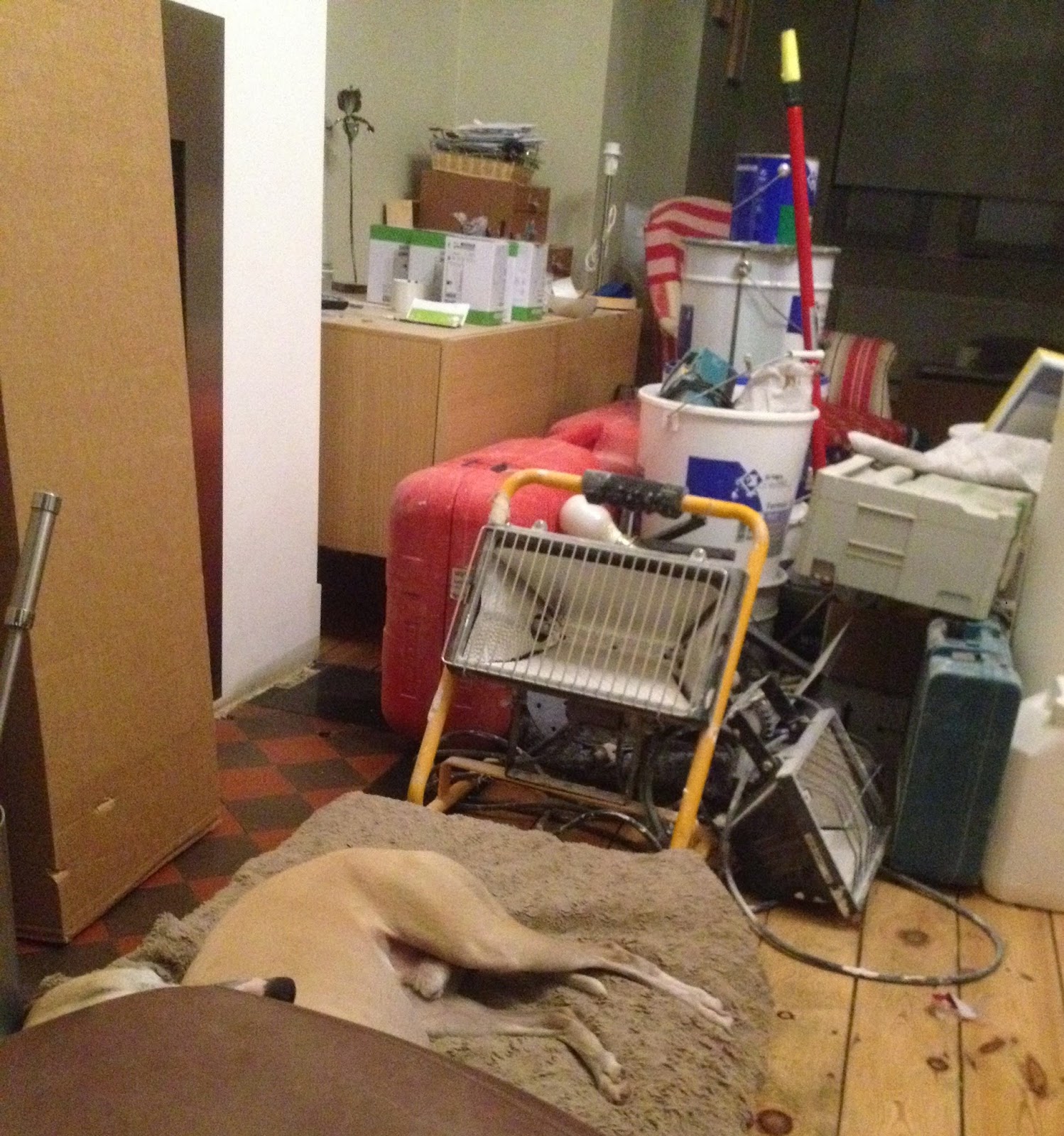 1. Accidentally roofie-ing the dog. We gave him the vet's recommended dosage of sedative to deal with twelve hours in a metal box on the Hull ferry, but when the time came to put him in the metal box, his legs had given way entirely. Even on arrival, he was stoned out of his tiny mind and staggered around the house in a state of loopy, paranoid confusion, running from room to room, collapsing into chairs then throwing himself out of them, peeing on curtains, burying under covers then emerging wild-eyed, a state which continued until the next morning. He did very much enjoy the rest of the trip - rolling in unspeakable things, chasing rabbits, climbing hills, and we did not give him the recommended dose on the way back. He is fine, well inasmuch as he is ever fine, ie. he is morose and unfriendly and spends his every waking moment plotting to get onto the sofa from which he is banned.

2. Arrival of a HERD of tiny ponies in the field down the road including 8 ridiculously little tiny pony foals and two exceptionally curious and friendly tiny ponies even closer to the house who would come for hugs and carrots. I have no pictures, sadly, perhaps because I was hyperventilating every time I went to see them.

3. Knitted garlic/onions in the window of the Leyburn hardware shop (along with a knitted bike, Tour de Yorkshire oblige): 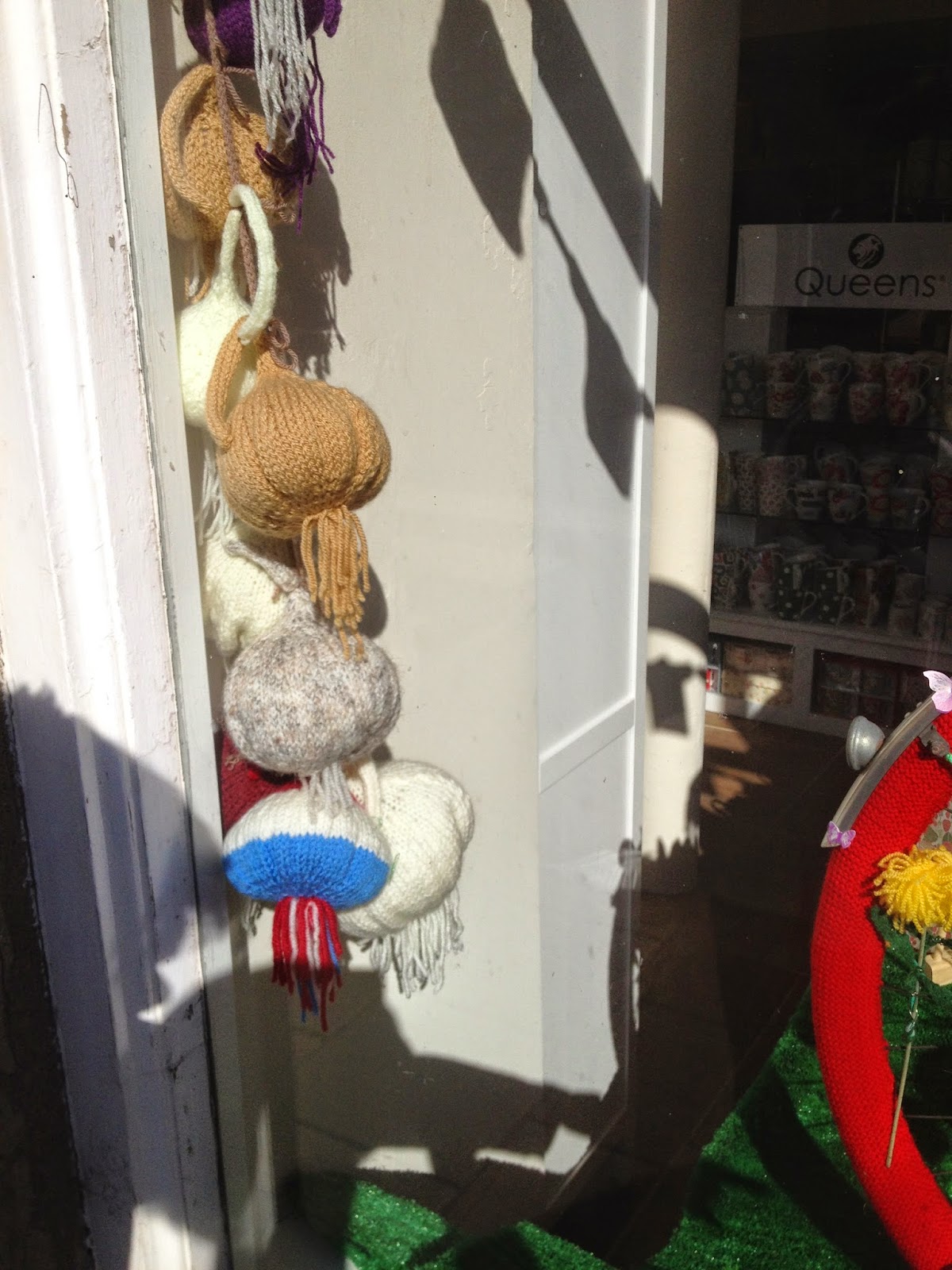 4. The dog attracting the close attention of a curious herd of bullocks and not noticing until the last minute. He was begging for sandwiches as we sat on some rocks and did not notice he had been cornered by a rapidly encroaching semi-circle of fascinated giganto-bovines. In this picture he is juuust starting to sense that possibly something untoward may be happening somewhere? He did not actually react until one of them touched him with a vast damp muzzle, whereupon he scrambled onto the rocks faster than a rat up a drainpipe and with less dignity.

This goes down in the annals of unfair amusement at the expense of my domestic animal (big, fat, annals those) as one of my favourite pictures of the weepette: 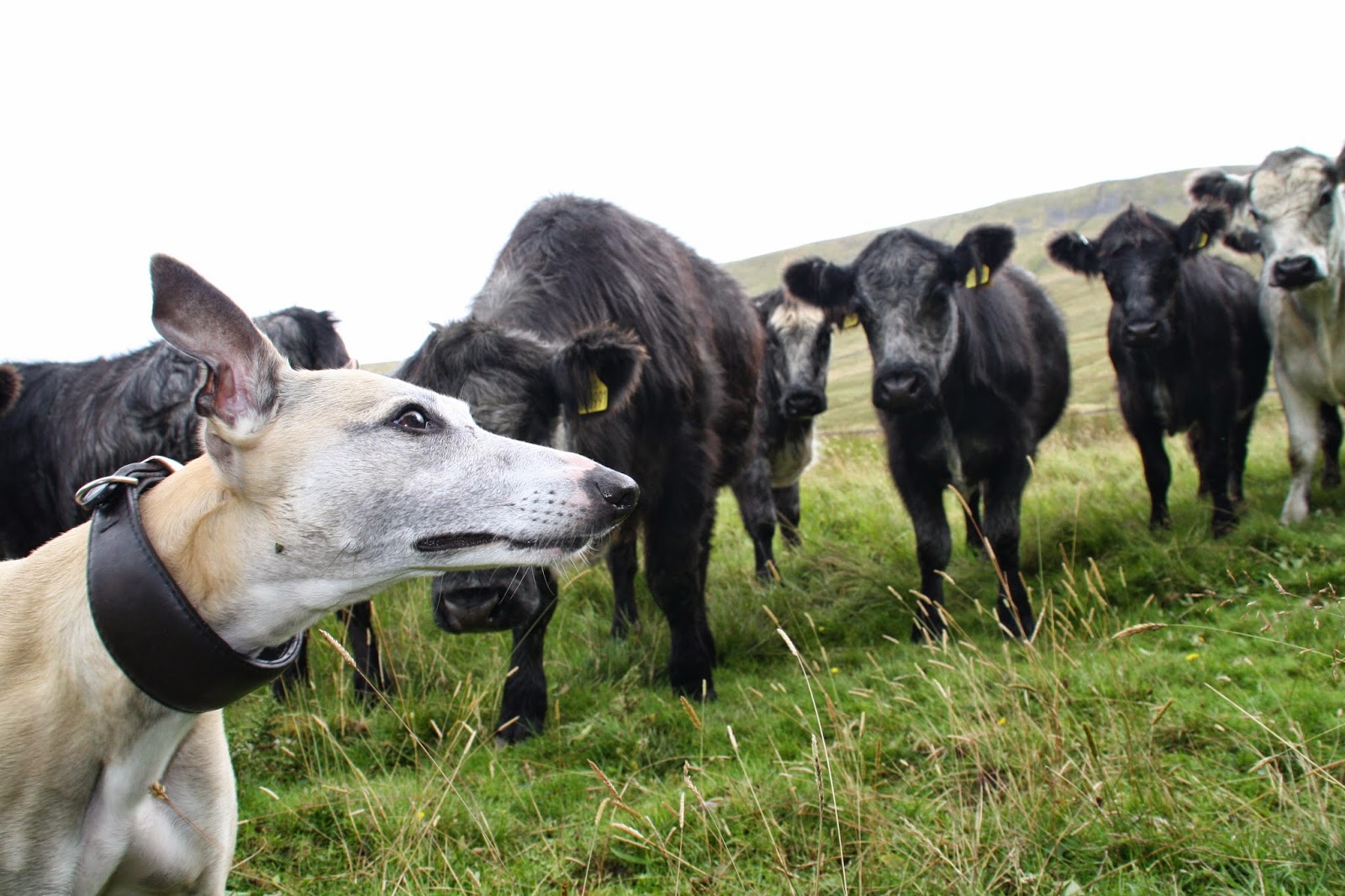 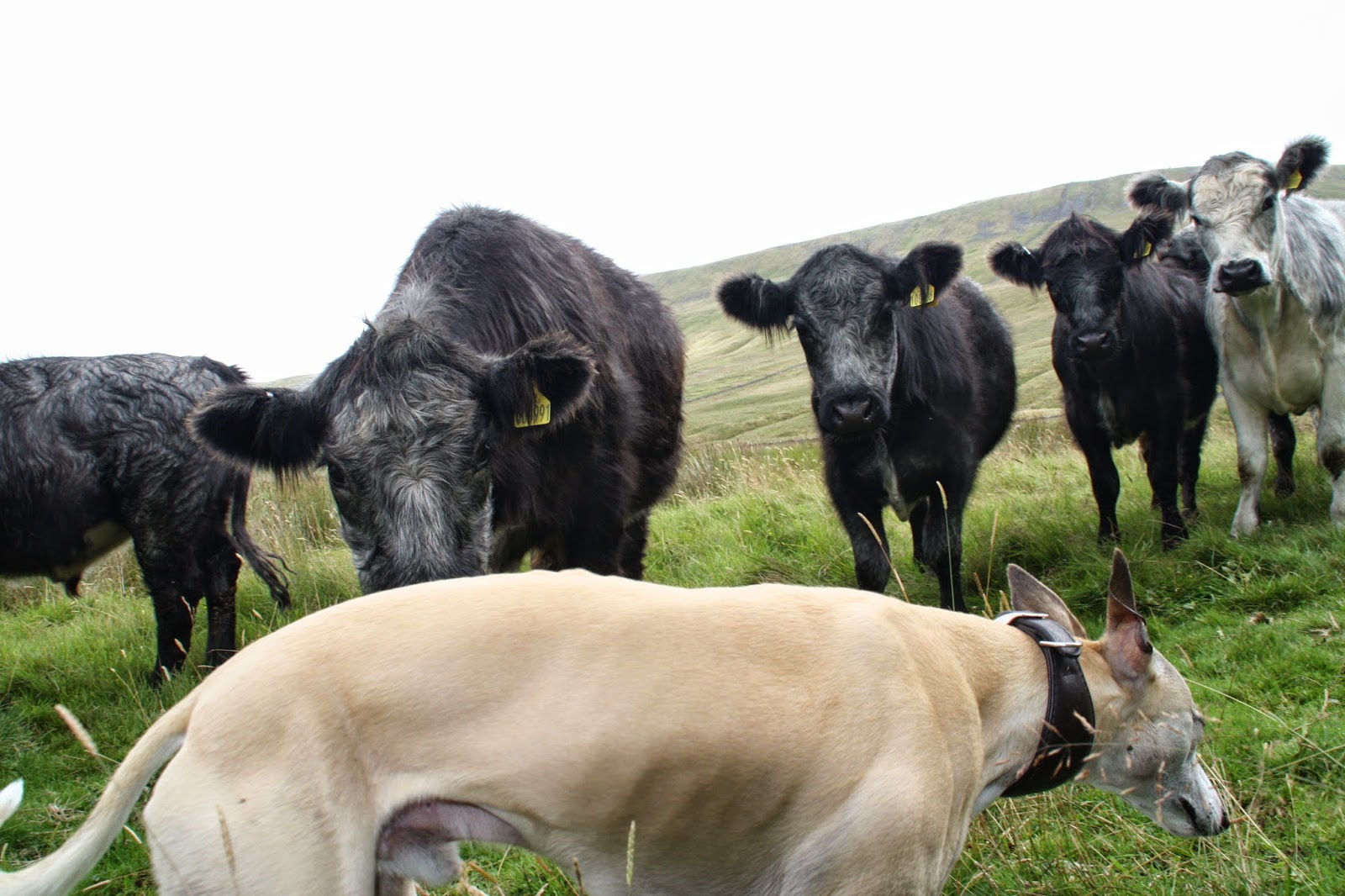 5. Ant and Dec live at the Leeds First Direct Arena, the boys' "treat" for the holidays (that, and a much anticipated trip to Poundland). Ant and Dec, for the happily uninitiated, are veteran squeaky clean Saturday night entertainers beloved of grandmothers and pre-teens (my father: "ANT AND DEC! THEY ARE DISGUSTING AND UNSPEAKABLE". Twerking. Castleford tattoos. Foam fingers. Keith godawful Lemmon. Indescribable. Best enjoyed half-cut on regularly replenished warm gin and tonic in plastic cups. I will give Ant and Dec this: they are impressively energetic and amiable and can eat a family sized packet of crisps between the two of them in less than a minute.

6. My favourite passage in all my holiday reading (of which a great deal more in the next post, when I will compare and contrast Eimear McBride's A Girl Is A Half Formed Thing and Hilda Boden's 'One More Pony'), regarding Sarah Bernhardt's menagerie: 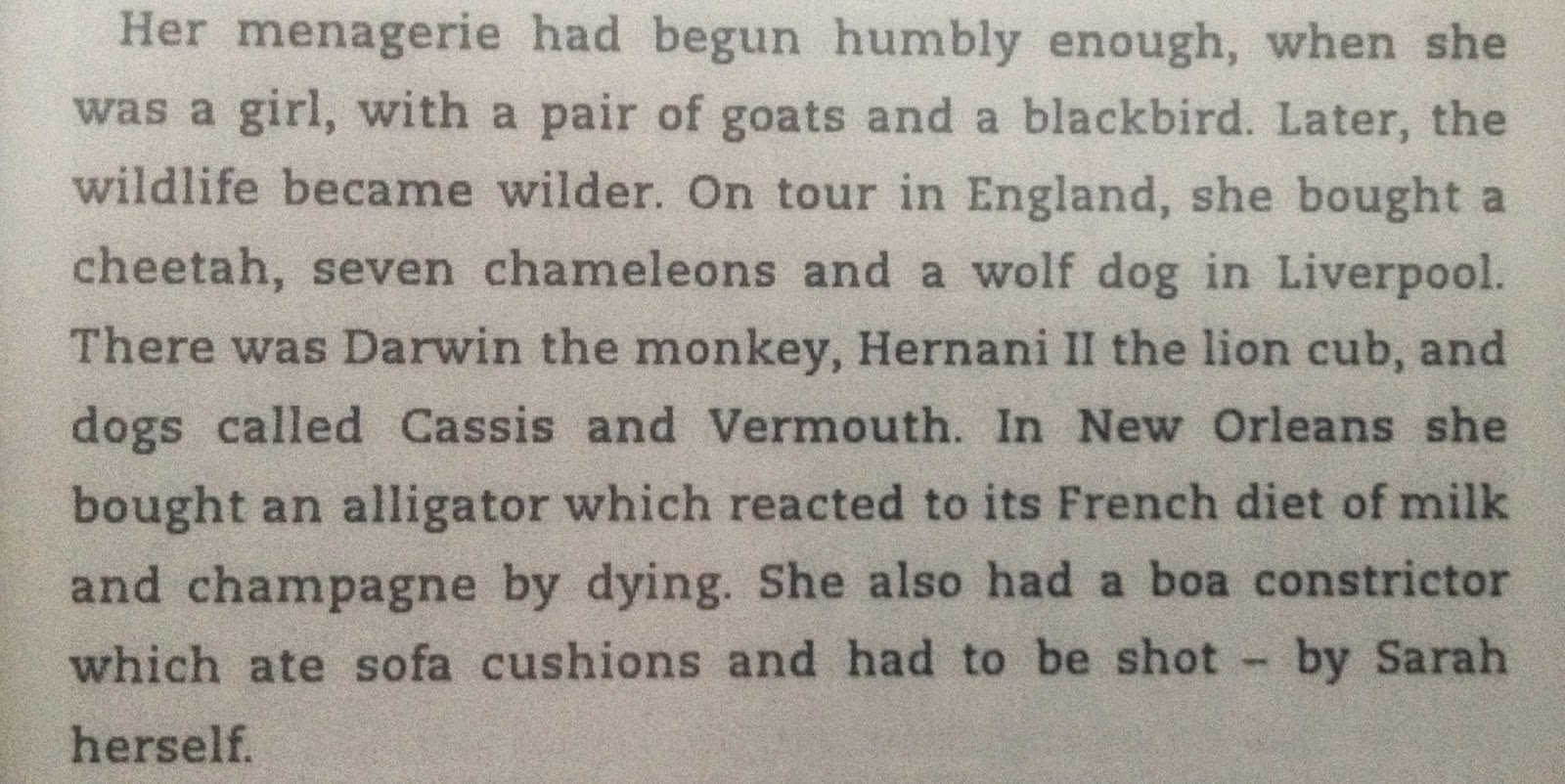 7. Regular encounters with these guys, usually on the road and having to be removed, politely, giving the giant horns a wide berth: 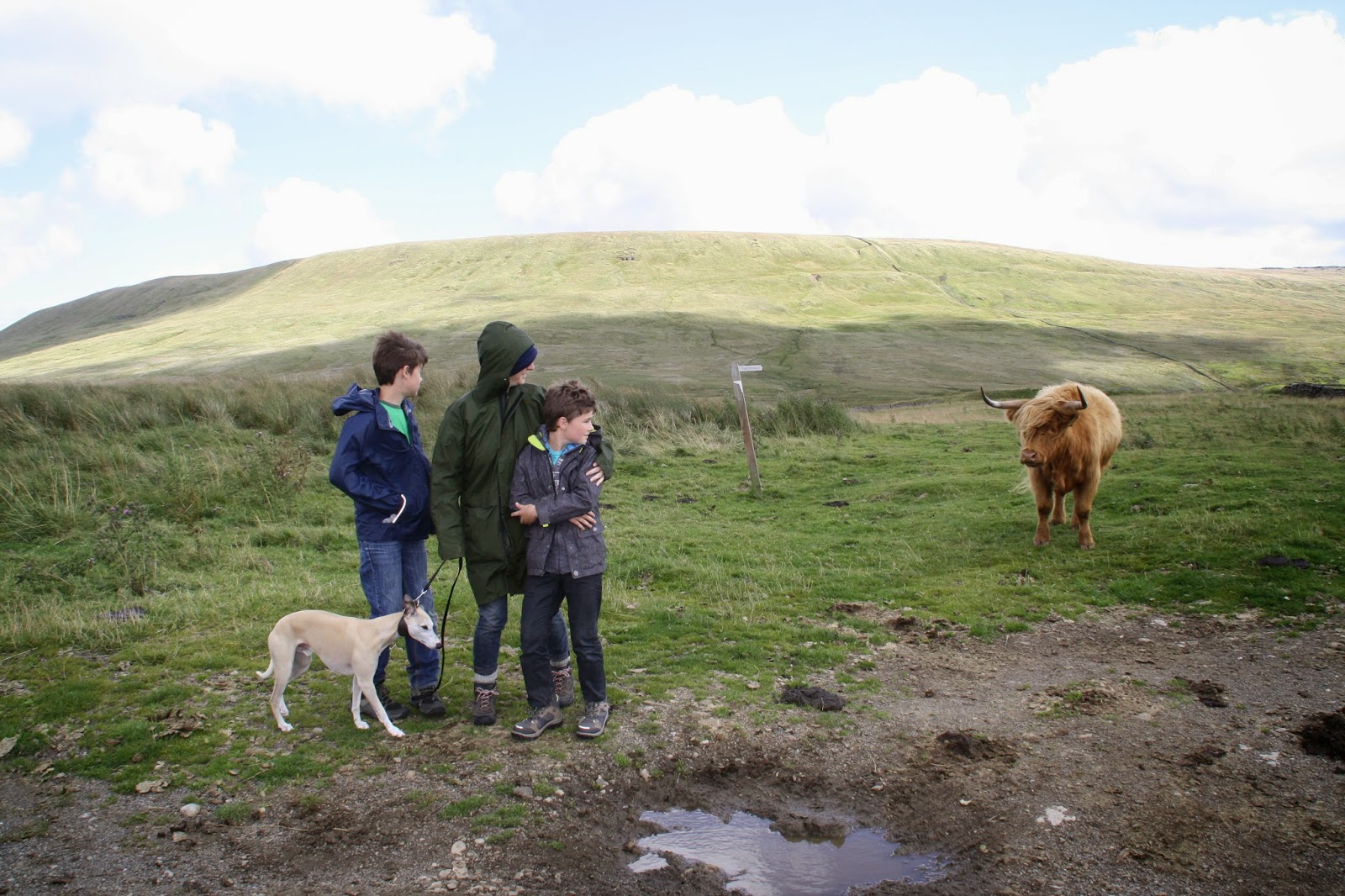 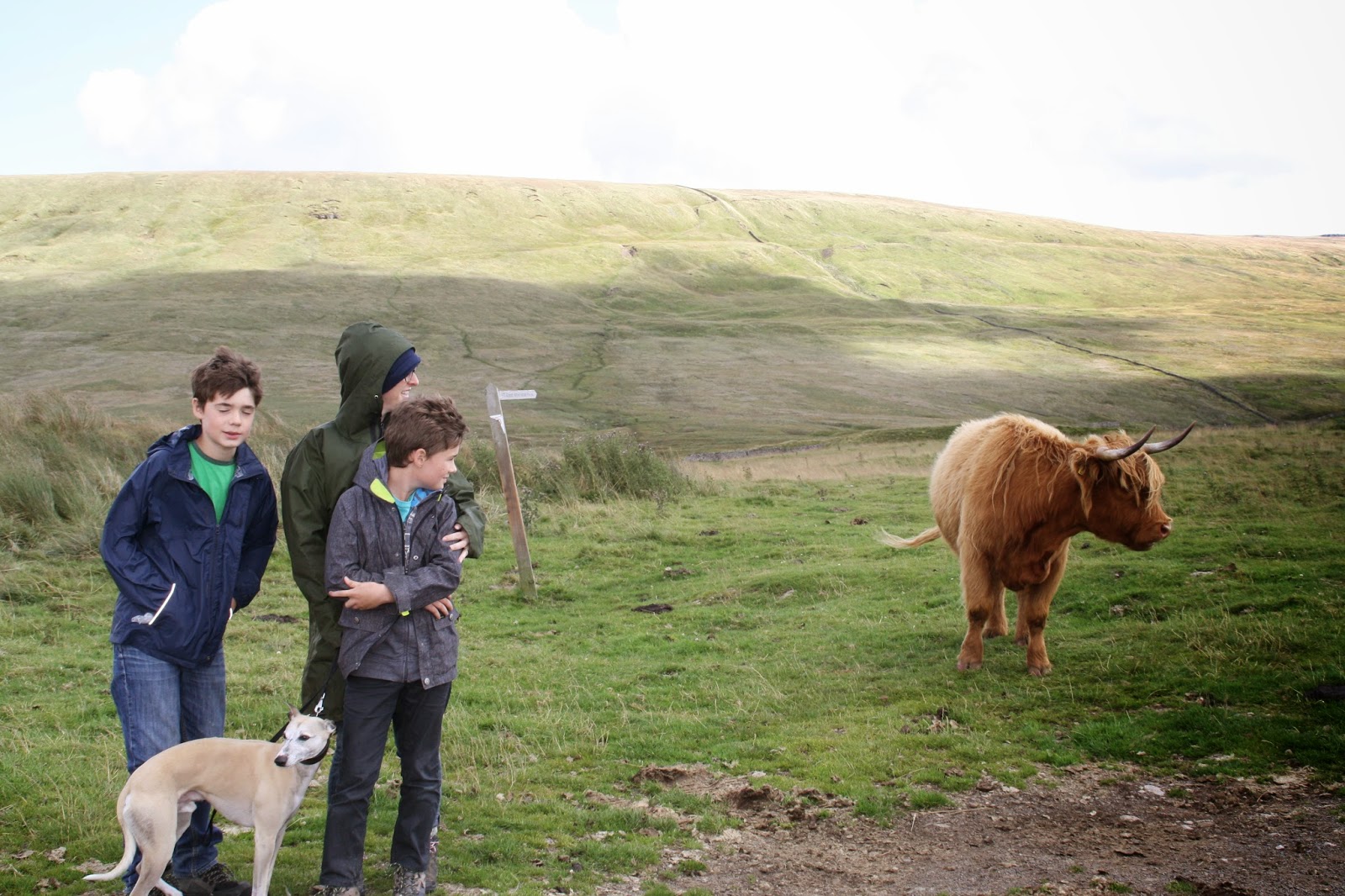 8. An eccentric but delightful meet up with ex-Brussels, now Edinburgh, much missed friend B and his husband in Pickering at a pleasant if wholly dysfunctional pub.

Otherwise our two weeks passed (for me at least) in a delicious haze of gin, Dairy Milk and crisps, vicious vertical bogs, dead and dying things (bird, sheep, rabbits, the electricity), long naps, hours of reading and peace, total peace (even the landline was down this year). Returning to the viciously awful state of the world has been grim and the temptation to surf the internet looking at cheap dilapidated barns enormous.

Three positive things about being back, just because it is good for the soul:

1. Can resume vital for emotional well-being regime of daily light complaint with M.
2. The cheese shop reopens tomorrow.
3. It was briefly quite beautiful this morning and at least I don't have as many sulky teenage children as the family of swans I saw at the Ixelles ponds this morning: 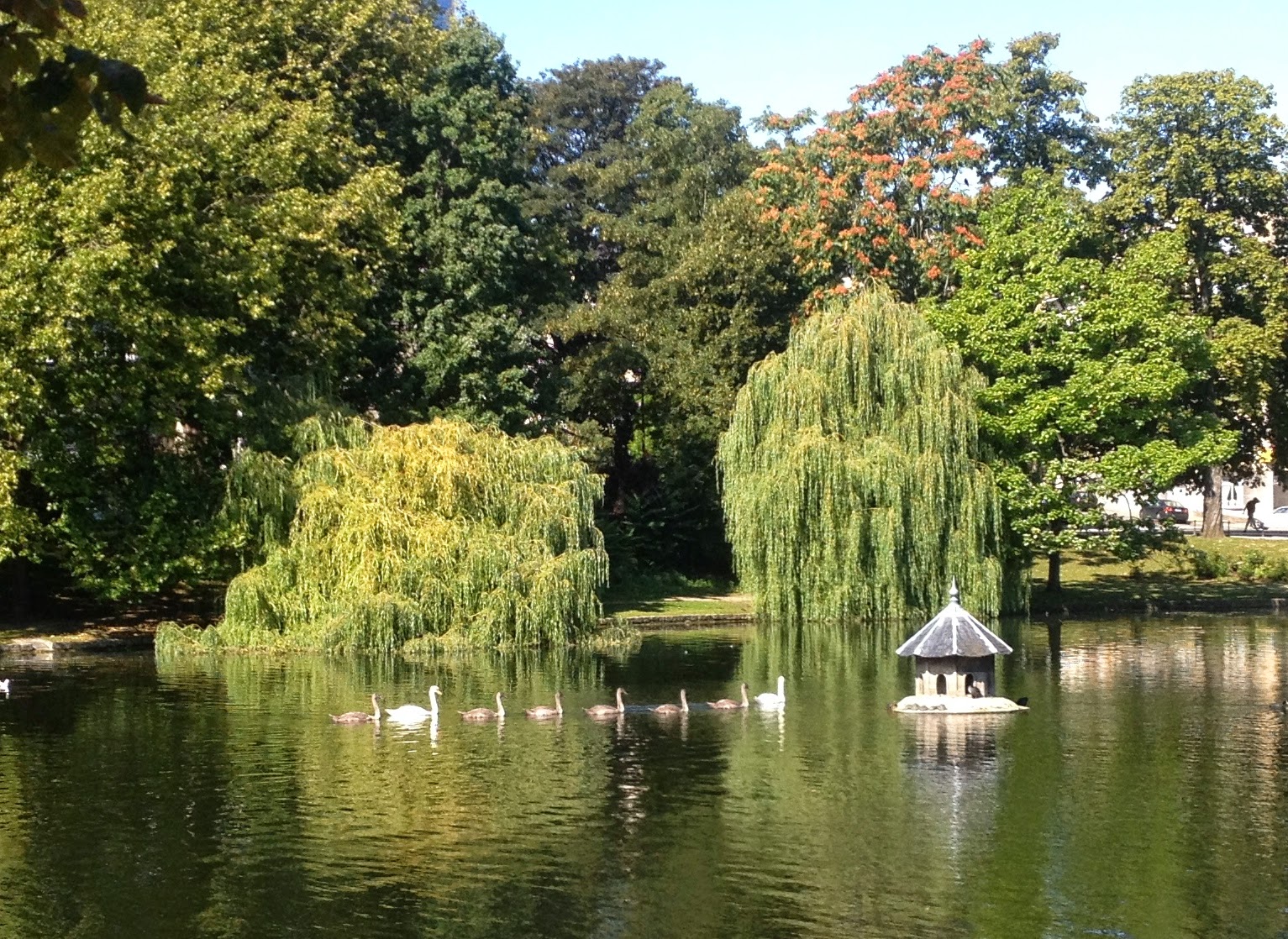 Have you been away? Would you like to fill the comments box with lamentations at your return? I have missed you!

Percentages (I have forgotten how to do this properly, clearly):

Have just departed the Blighty shores myself for warmer climes before the schools beckon, accompanied by the three cherubs who alternate between being absolutely tremendous fun or fodder for camel merchants (as in: I would happily trade them).
Fortunately OH arrives tomorrow so he can a) take over the cooking, and b) entertain the offspring with less shouting than yours truly.

The first Weepette photo is just priceless. The whole story just 'there'.

I'm so glad you're back online. I was quite worried for a bit, then remembered Yorkshire. And was promptly wildly jealous. LOVE that first photo of the weepette surrounded by cattle. Hysterical!

We missed YOU!!!!!!
Home sick with some weird germ that makes my face hurt. Am ordering male offspring about like I am Marie Antoinette with PMS- why can he never get the amount of sugar right in my Earl grey tea?????????
In my fevered mind, the picture of Weepette was accompanied by that bit of music in Jaws. I laughed til I scared the cats. Which was also funny.

Holidays comprised of:
- St Bee's to Patterdale hike over 5 days (day off in Grasmere for gingerbread, obvs) in glorious early July weather
- Various jaunts to Newcastle, Cardiff, London and Exeter where the UK did its best-ever 'this-is-a-wonderful-place-to-live' showing off - everywhere I went there was sun and excellent customer service and no dog muck
- CAPRI CAPRI (salivating at the very thought of the gooey bready cheesy spinachy lunchtime special)
-Cumbria and Northumberland for brother's wedding mania which was possibly the most wonderful few days of my life EVER (I.D.S.T.)

Now back in Brussels beating down enormous piles of ironing and looking at GCSE results WOE IS ME.

I hope the weepette is in your book. His look of slowly-dawning-on-me is precious

Oooh, welcome back! I have too been away, but first I returned from China via Hong Kong and Tokyo which has left me reeling from simply too many diverse experiences and beauties.

July: return, brief work, trip south to summerhouse, unexpectedly full of co-owners teenaged boys' friends, brief mental collapse over this, then tired acceptance, many many swims in a wild sea, many late nights reading and then a week of insanely running around in the woods (orienteering) during the day and sleeping awfully badly in a tent during the night.

Trip to the north, blueberry picking, car excursions, fermented herring party, old relatives telling doubtable stories impossible to check on since everyone else of that generation is dead... well. Thats pretty much it.

Am I the only one who confused Sarah Bernhardt with Sandra Bernhard? (For a few minutes, Sandra went waaaaaaaaaaaay up in my estimation).
Currently 100% Game of THrones. In fact have just watched the Red Wedding episode. Woah! I did NOT see that coming.
Also slightly wish I could have another baby, purely to call her (or him) Daenerys. (Perhaps twins? Daenerys and Khaleesi. Noone would fuck with them, ever.)
Yorkshire looks beautiful, and the curious / murderous cows just brilliant.

I am so glad you are back!

Oh, yeay, so happy to see you back - been checking my Blogger reading list for days in hope of a bit of Waffle.

Adore the first pic of weepette and the coos. Most movillis. And also still roffling (in painful recognition) of the mini Father Jack in your household. Ours were like that for weeks but hurrah for Scotland they've been back at the chalkface for a week and the institutionalisation is doing wonders for them.

We drove for 3 days to the Alps where it proceeded to piss with rain for 2 weeks. So much that we were washed out of our tent. Came home to a parched garden, which, in the west of Scotland, is a bit like saying 'came home to find an alien spaceship had landed in the garden'. Tsk.

There you are! It's good to see you back after what sounds like a wonderful restful time.

No holidays here in the Southern Hemisphere winter, mild though it has been with the temperature of a usual UK summer. Today the door to the freezer has been opened though and the southerly is blowing straight up from Scott Base into our lounge.

I love the Weepette/Bovine encounter, that photo says it all.

95% all loved up from bottle feeding 6 lambs 3 times a day and post milk woolly cuddles.

I just about keeled over laughing at the description (and pic) of Weepette and bovine moist muzzles. Welcome back.

good not publicly release the variations between. Keep in mind playstoreapp.co will certainly be presented to the Play Store at some time nice.