Given my natural tendency to pessimism and peasant superstition and my ability to make happy events a source of Eeyore-ish angst, I have been feeling a bit Funny about the book (it's years away! It's far too personal! Who would want to read it anyway? FLEE TO THE HILLS), but your kind thoughts and words gave me a huge boost and now I am all galvanised to woman up and make it as good as I humanly possibly can (ie. cut lots of the boring bits about Zola, work out how to write the final unwritten 1/4).

In the face of the awful, unbearable state of the world, I can offer nothing meaningful. Instead, I bring you the soothingly tedious chronicle of my last few days, which has mainly been eating things and drinking things and staying out of the house to avoid the builders. Personally, I prefer to scour the internet for soft rock soundtracked goat/donkey reunions or animals on capybaras when I can't bear too much reality, but if someone else's pleasantly uneventful long weekend is your valium, read on.

- Thursday*: a steamy evening walk through the city centre as dusk fell and even though neither the ice cream parlour nor the mojito van was open, thwarting all my plans, it was still like being on holiday somewhere foreign, the city completely transformed by the heat, tourists in Gore-tex thong sandals, lounging dogs, picturesque drunks. Being dressed like a 60-something gallerista (long Cos sack, Birkenstocks) also makes for no street harassment, which is a bonus. On the way back I went to the Lebanese for takeaway calamari, and there was a hot, busy, multinational queue of falafel loving people and they were giving away free namoura at the till for no obvious reason and it was one of those lovely reminders that I do actually live in a big city, even if it doesn't much feel like it out here in Uccle, which is currently like a deserted village ruled by cats. (*I've just realised this was Wednesday. Days are bleeding into each other)

- Friday: 34°C peak temperatures at cowering space leading to total brain implosion by 11am, zero productivity and hours of staring into space/occasionally walking slowly barefoot along corridor to splash water all over myself, followed by wilting dog. Early evening pink prosecco, then a cool bath with Epsom salts and a book, then spring rolls and a small gin in front of Celebrity Masterchef, which was terrible, but in an enjoyable way.

- Saturday: Ikea (boo), crêpes and cider (yay) at Le Crachin, which I love mainly for its caped weasel logo, pillow buying (bof, necessary and aïe, so expensive), Pimms (yay) and fish and chips (double yay). Dog arrived on bed in night scared of impending storm, and spent hours wriggling and fidgeting and overheating. There was no storm.

- Today: NO BUILDERS. Lie-in, finished book (reading, not writing, ha ha. It's been an all-women July, I note from my reading list), breakfast at home, pottered to eclair shop for coffee and free samples, purchased enormous monstro-Millefeuille, afternoon trip to the new Fin de Siècle museum which has some absolutely beautiful individual pieces (gorgeous Vuillard, some lovely Félicien Rops, a perfect Bonnard, a nice, moody room of Spilliaert, various other treats) but is not, I think, a success overall. It is located deep in the newly excavated bowels of the Beaux-Arts building (you get down to MINUS 8, which is like being in a deeply buried multi-storey car park or something), there's no signage and some of the lighting just doesn't work at all. I did very much like a portrait of the artist Anna Boch, who looked like a handful, in the best possible way. Also, look at the lifts! They have COMFY SEATS. 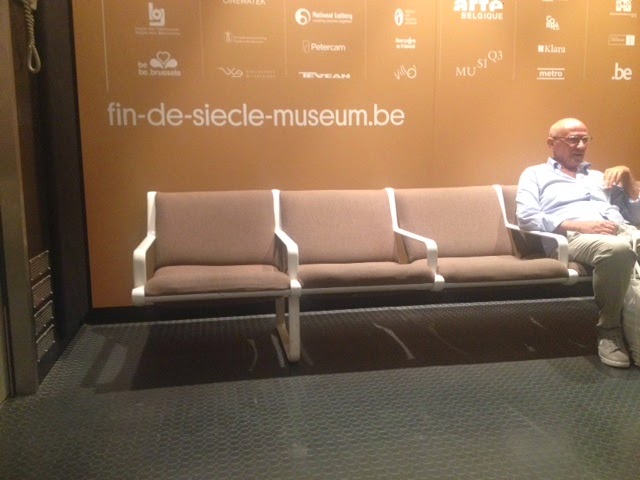 Who the hell makes a gigantic lift with ten enormous comfy seats but includes no explanatory signs whatsoever in their museum? Go home Belgium, you are drunk, but you are a nice, affectionate, confusing drunk.

Then we went, briefly, to check out the Bal National on the eve of the Belgian national holiday, which was like a cross between a massive village fête and the audience participation bit of the pantomime and I dunno, a medieval joyeuse entrée, since we all had to learn a dance and series of bows especially to perform to the King when he arrived (to sit on hard chairs on a small plastic covered dais in his dress uniform in front of thousands of his catastrophically inebriated subjects in tricolour plastic wigs, an event to which I'm sure he looks forward all year).

These ladies were enjoying it: 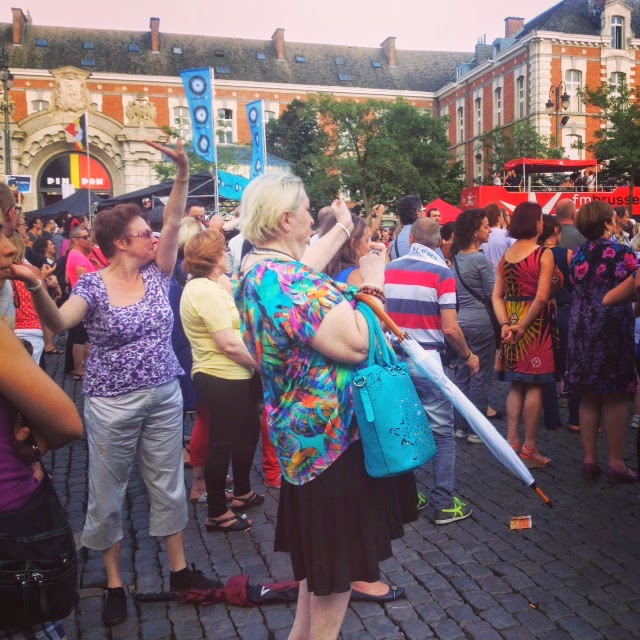 Meanwhile, our Prime Minister, a man who truly knows how to have a good time, was at the famous EDM festival (is that what they call it? Who the fuck knows, I have lumbago. You can't have lumbago and understand EDM, it's the law), Tomorrowland, having his picture taken with boozy, cheerful youths. Look, un selfie! (masc? fém? "L'usage hésite", apparently, but I'm assuming it derives from auto-portrait rather than photo) And look again! Another! I could look at these for hours. Sigh. I love him.

It is the Fête Nationale tomorrow. Vive la Belgique.

So very excited for your book When can I pre-order on Amazon US? Go ask your editor right away!

Can't wait to read your book--you can make the most mundane weekend thoroughly enjoyable to read about, so I can only imagine what you can do in longer form. Ánimo, as they say in Spanish.

Ha! Returned from useless, trying work trip complete with dodgy internet to the glorious news of THE BOOK.

Do ask that pre-order question, would you? It will be my first pre-order!

I didn't get a chance to trill excitedly over your book at your last post, so I will do it here. TRILL! THRILL! BOOK! HOORAY! I can hardly wait. You are brilliant.

Still blinded by the positivity of your book news. As someone trapped in a byzantine housing market collapse, like a fly in amber, I have to admit that part of my joy is thinking, "There's going to be something to look forward to in 2016? So soon?"

I'm trying to amend the situation here, make no mistake, and have recently fired my spirit animal (centipede who eats way out of snake). Possible replacements are as follows:

The screaming old lady on your block.

That sloth that thought it was 'escaping' when someone lifted it, VERY slowly, up onto a tree trunk.

A BOOK by Waffle - this news is beyond exciting, congratulations. I'm counting the days already!

Many congratulations on your book news. If you can harness the excitement and goodwill of your readers it should be a doddle. So just get on with it! (sorry about the exclamation mark).

And another thing, how come you have a Prime Minister who not only resembles but also appears to be at home in the company of human beings?

Here in Blighty we are expected to choose between identical focus-group-approved non-entities with whom you would not trust your handbag/wallet.

They only condescend to mix with the rest of us when offered a photo opportunity and then look so awkward and out of place that any perceived gain must be a net loss.

Can't wait to buy your book. Sad goat video. Who knew capybaras were so accommodating?