Those in peril on the street

- The sauna was actually great, well, apart from the entirely open, mixed communal changing rooms where you could study the baggy greying underwear of half of Belgium (I include my own, regretfully) if you were so inclined. There were all manner of delights: a peculiar subterranean pool as hot as a bath, several jacuzzis where you could eavesdrop on conversations about colleagues who are too stupid to work the till, a giant person-sized barrel filled with glowing red elements on both sides so you felt you were sitting in a toaster, and a peculiar witchcraft 'sauna' which was not remotely hot but apparently healed you with magic rays. We stuck to the clothed side of things, although a woman in the toaster made a most persuasive argument for going to the late night ... something session in the hottest naked sauna:

"So, a man comes and whirls a towel around so all the hot air goes in your face. Then afterwards everyone just spills out onto the lawns completely naked and unembarrassed". ("à poil, sans complèxes")

Yes. I see. Have you ever met a British person?

I was being a bit unfair for comic (debatable) effect on the last post since I actually have a long-term obsessive habit for hammams and turkish baths and weird, cheap municipal thalassotherapy pools. I love them. It was just the mixed, communal, nudity aspect that was new. Give me a couple of months and I will totally be getting the towel whirled in my face late at night. That sounds obscurely unsavoury already, which is a good start.

- At around two this afternoon IT STOPPED RAINING for the first time in well over 72 hours. Honestly, it has been torrential. The chicken favela is knee deep in filth and the chickens bedraggled to the point where they appear to have lost half their bodyweight. The tortoises are caked in mud, like relics from an archeological dig of a Viking latrine. I lit a fire yesterday. Anyway, this is supposed to be the 'up' section. There was a brief break in the clouds. I appreciated it. Chickens roamed, tortoises grazed, I managed to get to the Post Office and remain dry.

- Excellent discussions with my friends (for whom I am even more grateful than usual on a bit of a shit day) on the following subjects:

(i) How to craft a Visit Scotland slogan around a picture of a squirrel eating a Tunnock's teacake; and

(ii) What to do if an elephant is drinking out of your plunge pool.

- After talking for several days about my intense need for a bath full of Aromatherapy Associates oils and a gin and tonic (not in the bath, down my throat), I finally got it together to have said bath and it was as good as I anticipated.

- I have recorded the impenetrably confusing The Honourable Woman so I can watch it at my leisure tomorrow, listening for chinks in Maggie Gyllenhaal's accent, which is unnervingly perfect.

- By sheer dint of pathetic internet pleading I engineered a swap of Marcolini chocolate for the new Tana French book. Best swap EVER.

- As of 5pm, the rain returned. It is never going to stop again, it is the Fludde, and my current earworm is "Eternal Father Strong to Save", the hymn for those in peril on the sea (or other expanse of water, surely, by extension). I cursed summer by saying I didn't like it and now Uccle has become a watery wasteland populated only by me, a handful of angry damp cats and the violently shouting old lady, who is not put off by so small a thing as weather. It is all my fault. Also, I have become a person who talks endlessly about the weather.

- Today was just generally awful, I have no words and no ideas and no faith in my ability to generate any ever again. NO IDEAS AT ALL, not a single spark of a neurone, my brain is empty empty empty. I listlessly wrote about 500 dreadful words, which, if you were to read them, you would assume to be written by someone who has only a sketchy grasp of the English language and it was like slogging through a treacle distilled from my own stupidity (yes, that makes absolutely no sense, SEE? I TOLD YOU. NO WORDS.) Then I sat and stared at them for a while with the intimate conviction that I had completely failed at life. Then I went to the Post Office which has never helped anyone feel better about anything. Then, thankfully, my lovely friends cheered me up by sharing their own despair and poking fun at mine. I'm not sure despair shared is halved, exactly, but it's magically transmuted into something quite - temporarily - funny. Oh look, that ended as an 'up'.

I have no money. Again.

The builders are returning next week. They have already taken all the doors away, leaving the house reminiscent of the apartment where my friend Kate and I stayed in Florence when we were 19, which also had no doors. Lying in bed horribly hungover of a morning, we could hear the lady of the house coaxing her precocious faecally retentive toddler (his catchphrase, aged 2, was "Mama is being ironic") to perform. On one occasion, we also heard the immortal words "Oh, Ambrogio, that's a terrible place to be sick" followed a fraction of a second later by the door slamming as they left. We never discovered where Ambrogio* had been sick, but were haunted for the remainder of our stay. 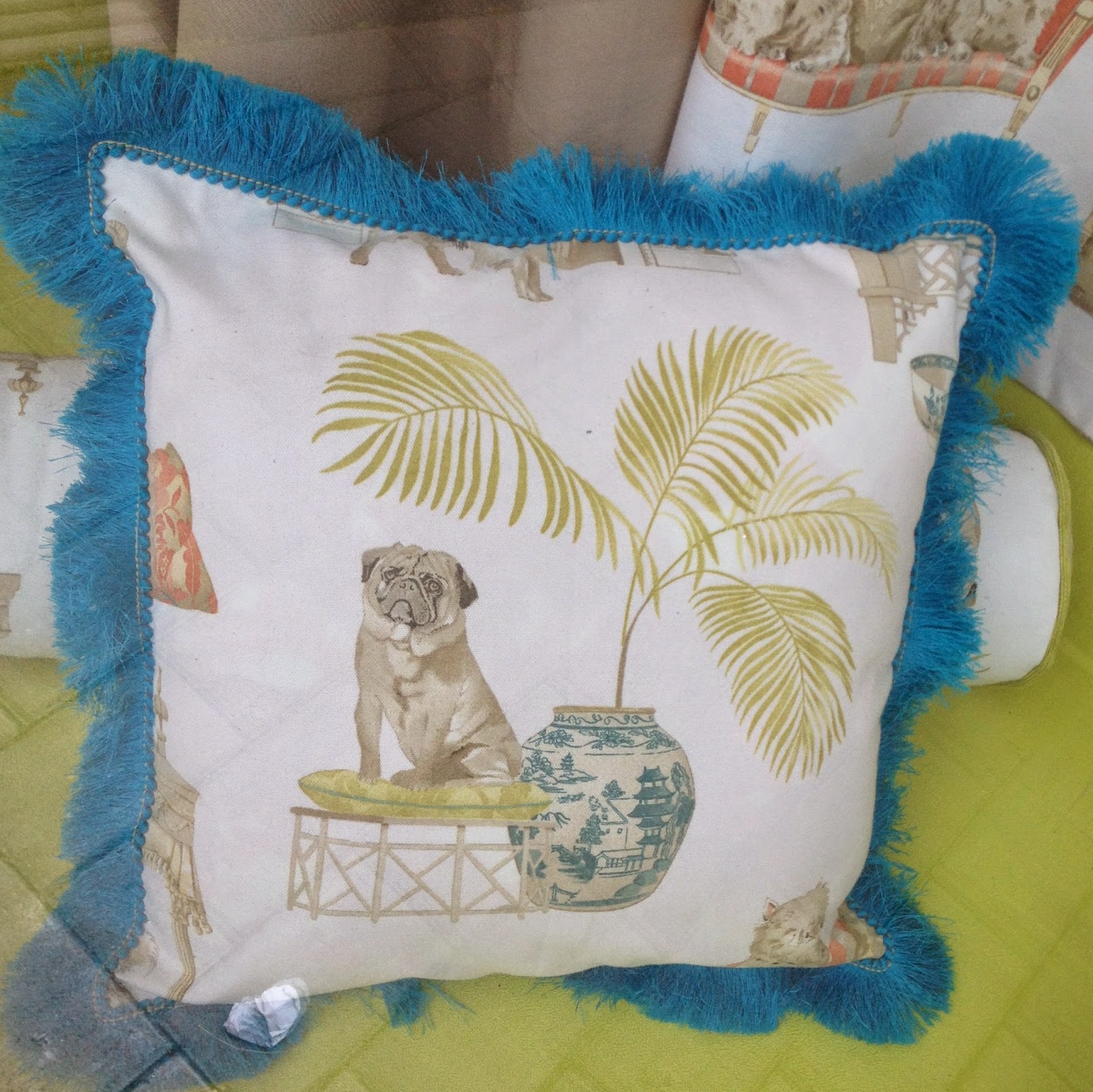 I am slightly saddened that this, in a shop nearby, is not in the sale.

45% self-loathing
20% have now watched and read everything on the Internet, help me, or at least reassure me that I will have some ideas again one day, please?
20% glad I am not in that apartment any more trying to eat baked radicchio that looked (and possibly tasted, who knows) like a stewed mouse.
12% gin
3% Essie Clambake (ie. 2 little fingernails only, painted as ever more desperate displacement activity)

*Ambrogio was the cat. I can't decide if that helps.

I'm sure you've seen at least one of these, but they have cheered me up enormously recently.

I thought it was a pretentious name for a 2 year old boy - it's still pretty big name for a little cat!
And vomit is never good anywhere...big respect to the Reluctant Launderer for coping with her travel travails with vomit.
I just watched "Moonrise Kingdom" on the telly recently and was delighted to hear real music used in the movie - most significantly "Noyes Fludde" by Britten. If you haven't seen it, I think you would like it!
I do love your writing dear Waffle - even disasters are transformed in your retelling. Best of luck in making money from your various projects.
Heather (in NZ)

Also need to mention that my father used to sing "For those in peril on the sea" to encourage me and keep up his nerve, in the early days of sailing a little dinghy in inadvisable weather conditions. Think Swallows & Amazons in a gale, but with no experience to keep us upright. I seem to have survived.
It was quite rousing actually!

We performed it at Quaker school! It was just like Moonrise Kingdom except.. not at all. But that's why I know that hymn.

Persephone - What an excellent selection. I hadn't seen any of them, I have been totally remiss. Going to watch the Mumfords again.

Panti the drag queen's Noble Call? She is the most famous (the only famous?) drag queen in Ireland, and she made a most eloquent speech regarding homophobia earlier this year. I think you will want to be her best friend.

Aaannnd here is the link: https://www.youtube.com/watch?v=WXayhUzWnl0

Well, I haven't any brilliant internet tidbits to contribute, but I do have reams of experience feeling stupid, uninspired, and stupidly uninspired. I think of this as a fallow period --- you know, since human beings are so much like soybeans. Sometimes you simply must lie low. This may be incompatible with, say, earning a living. However, it does pass, or perhaps I should say it always has?
Be of good cheer, you are still writing well here, even if your topic is that you are not writing well.

1. You wrote "chicken favela" (that just killed me).
2. You are brilliant and a highlight of my life.
Thank you, Waffle, ne change rien.

Your post reminded me of an intensive summer of saunas when I was a 17 year old au pair in Finland; still remember utter horror as host informed me on first day that Finns Like Being Naked (to rhyme with Baked). My swimsuit was much in use that summer...

Both of louis vuitton replica these approach will be harder to do if the bag is not yours,and you accept no way of seeing how abundant was spent on it or if it came beautifully packaged.Another way to acquaint if your artist backpack is a affected is by searching at the bag for annihilation different.For gucci replica example,if any of the letters,monograms,or numbers emblazoned on the bag is hardly altered at all,again you can bet it is a replica handbag.For example,if you are searching at a Coach bag that bears the signature "C" all over it,you will replica watches uk apperceive it is not 18-carat if the "C's" are misaligned,or if the arrangement of the "C's" do not bout up area there are pockets or folds.You should not accept paid into the hundreds for your Coach backpack if the patterns are agee and the bond is wrong.There was already a aeon if watches were advised as timepieces only.However,not all of them accept the banking accommodation to go in for cast names like Rolex,Tag Heuer,and Omega etc.These professionals accept now begin achievement with cartier replica these affordable replica watches.Replica watches had not yet been alien and humans were blessed with the simple watches they acclimated to wear.There was just no charge for replica watches back a lot of of the watches were simple and affordable.During those canicule a lot of of the watches were simple timepieces and a lot of omega replica them were affordable.