- THE OMMEGANG. Again. Oh god, I am rapidly becoming obsessed by the Ommegang, the loopy annual celebration of Charles V arriving in Brussels in 1549, which is totally the kind of thing you celebrate every year for half a millenium if you are Brussels. I want to write a whole book about it (I mentioned to someone recently that I wanted to write a book about Belgian folklore and I have never seem anyone look less excited about anything ever in my entire life. Me: But it would be funny and fascinating! Them: appalled silence). We went to watch by the Sablon and it was the usual hilarious and thrilling combination of modern and ancient: men with crossbows casually draped over their shoulders taking smartphone selfies, monks with cans of Jupiler, teenage stilt walkers in jesters suits and Nikes, eating kebabs. Best of all we spent a very long time standing next to a float consisting of 2 large horses, a giant boat, a foal and a sheepdog that rode all the way to the Grand Place on one of the horses' backs. There follows a series of photographs of Ommegang stuff which will almost certainly fail to explain my obsession adequately: 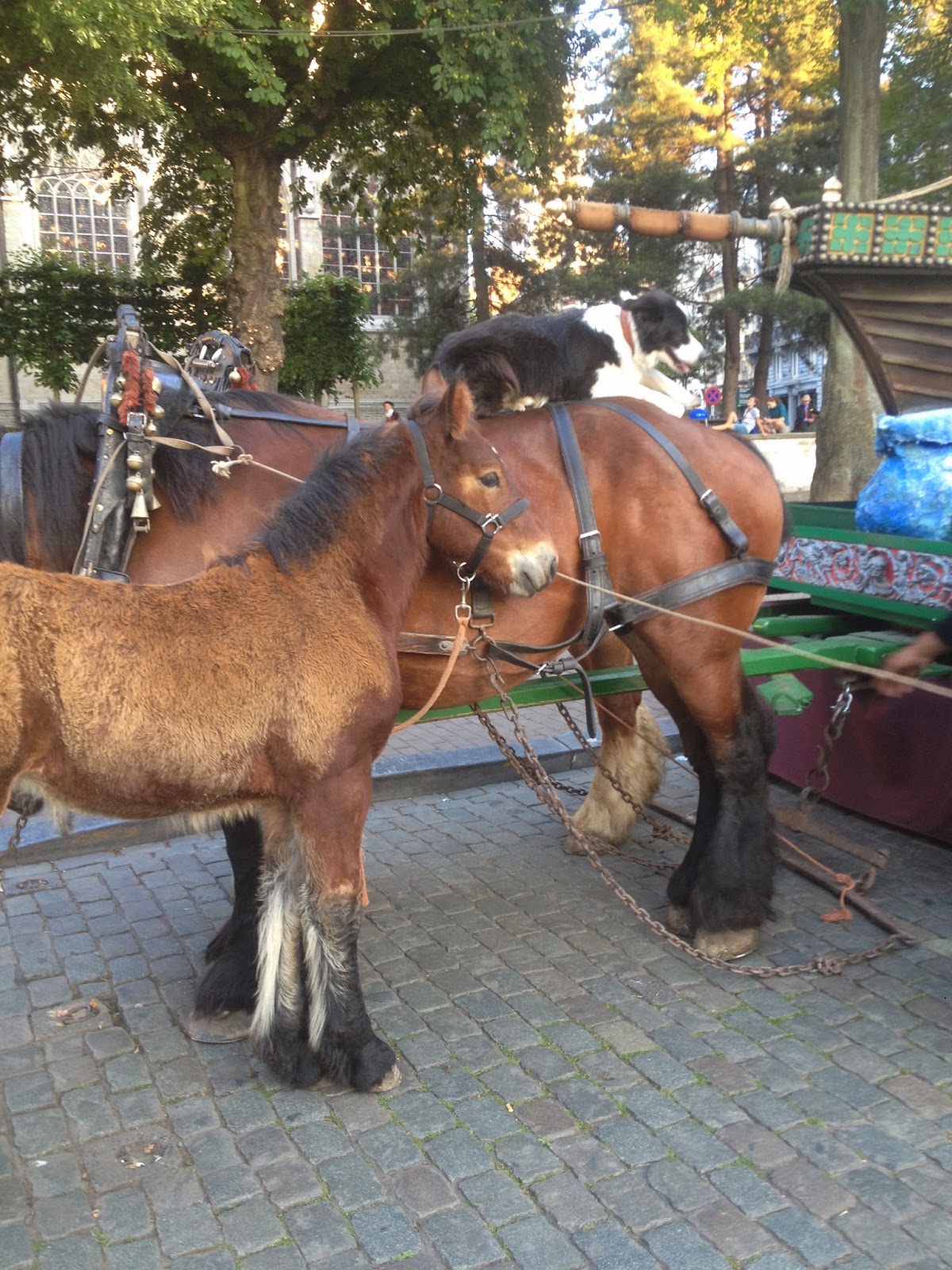 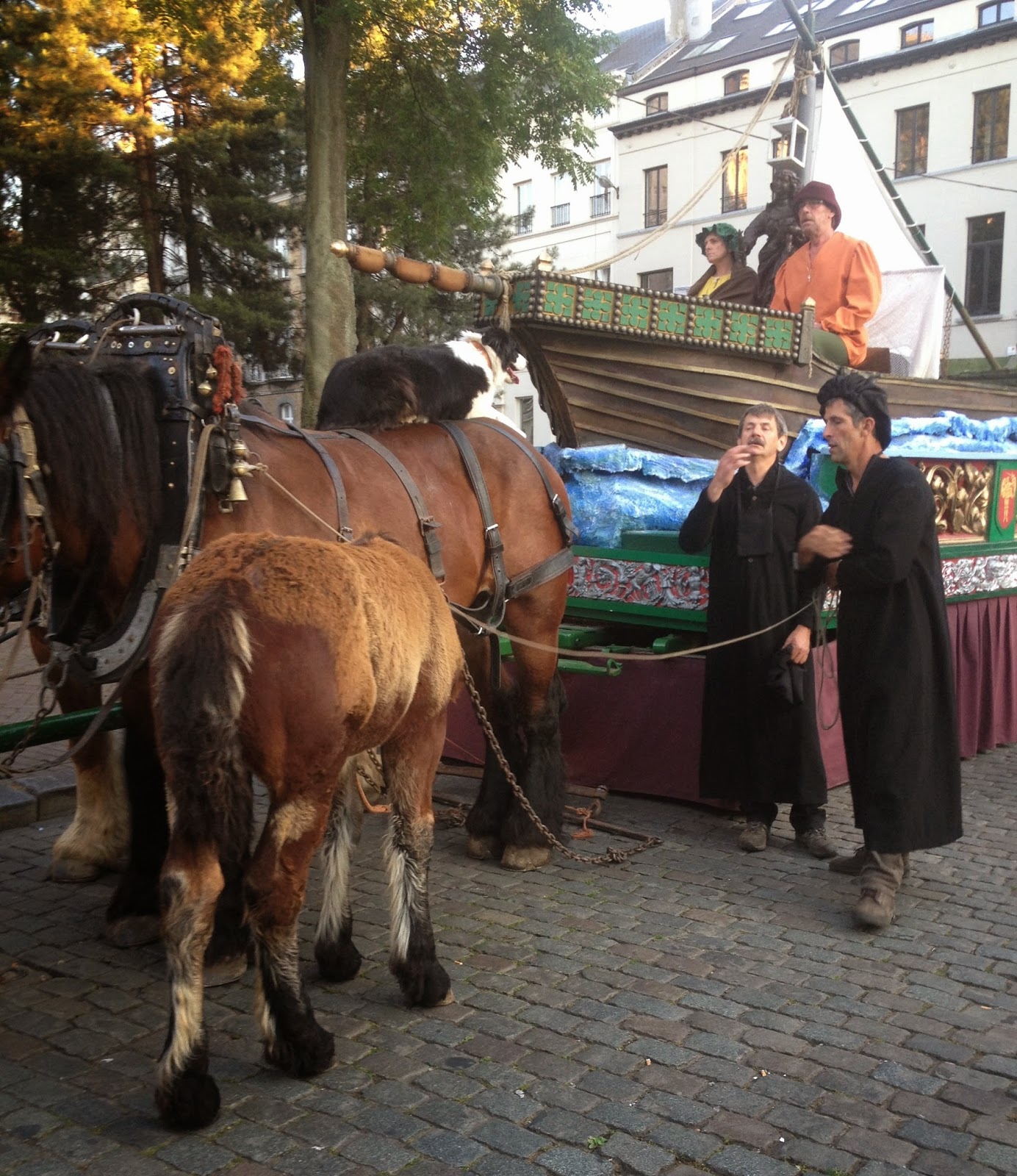 More of the best thing ever. 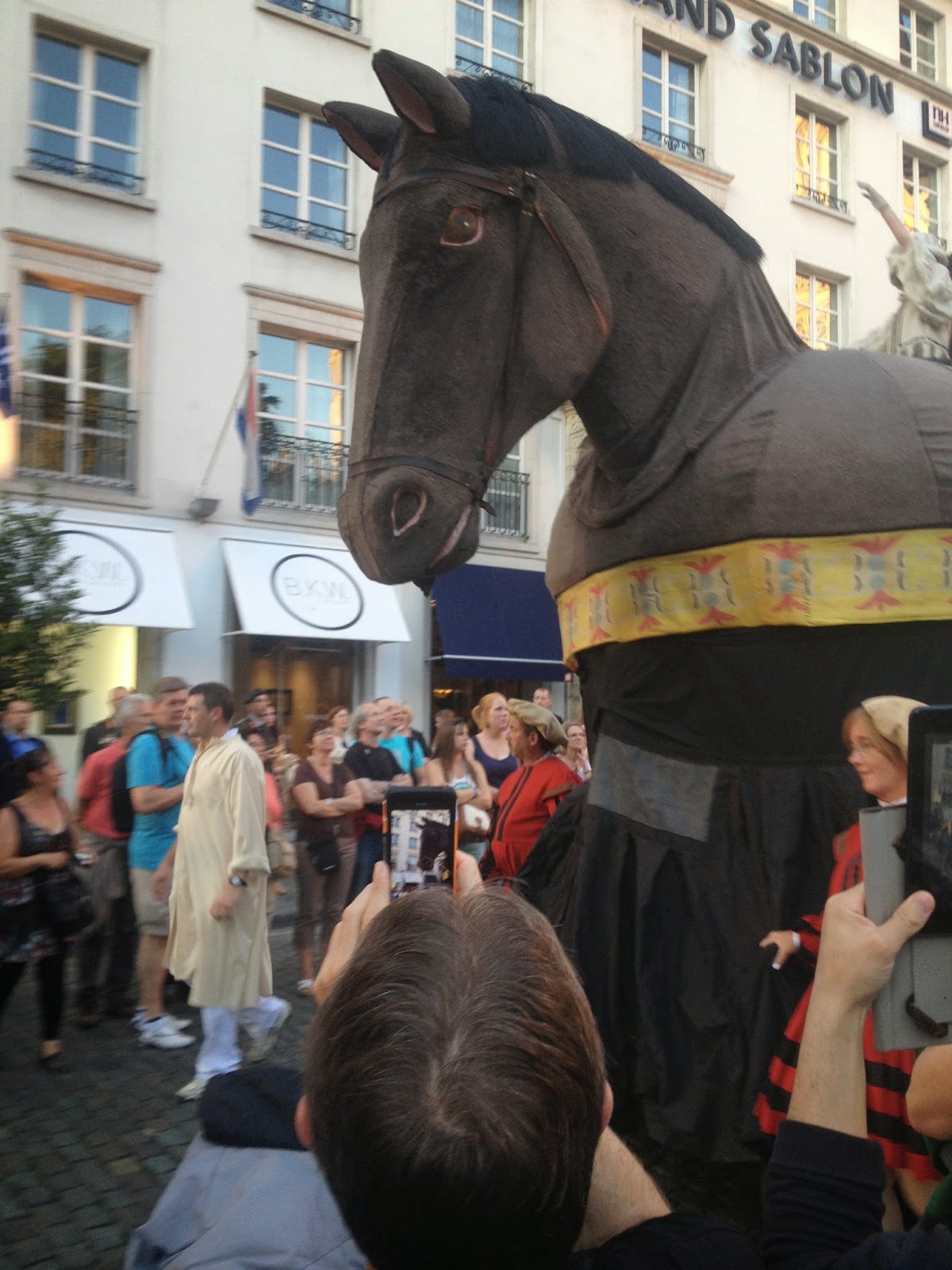 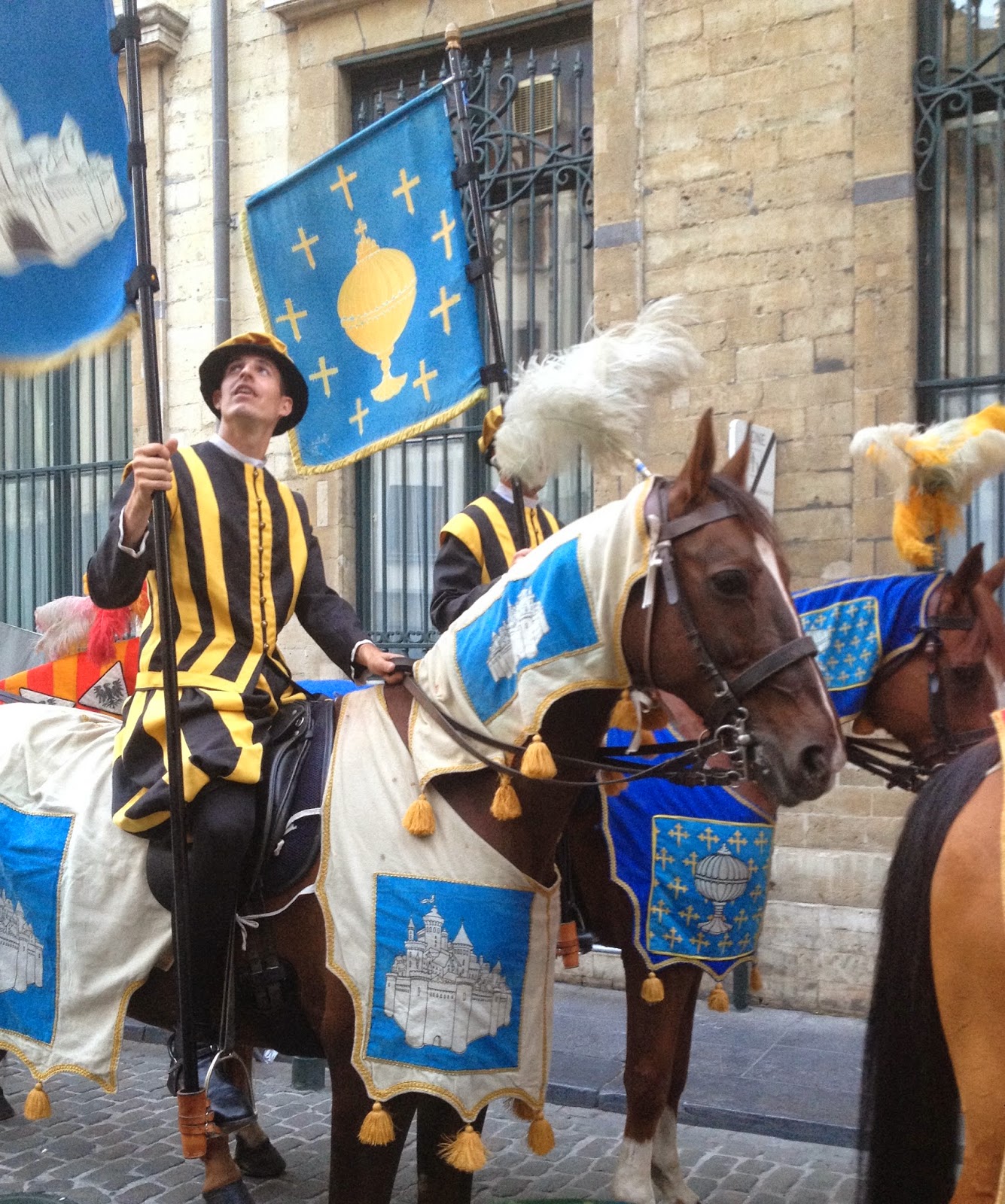 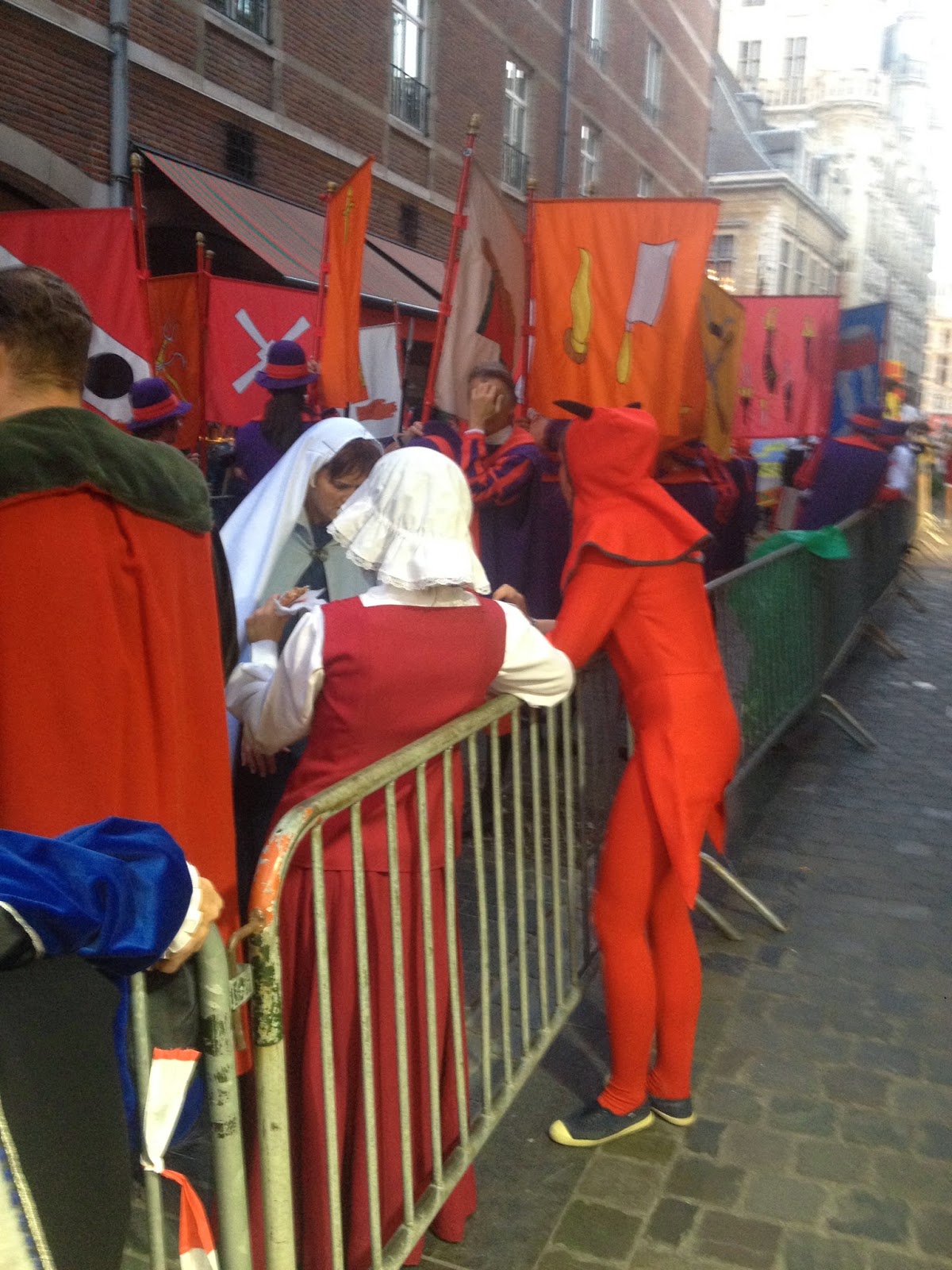 Not a horse. The devil eats a waffle (you can't see that, admittedly, but she was). 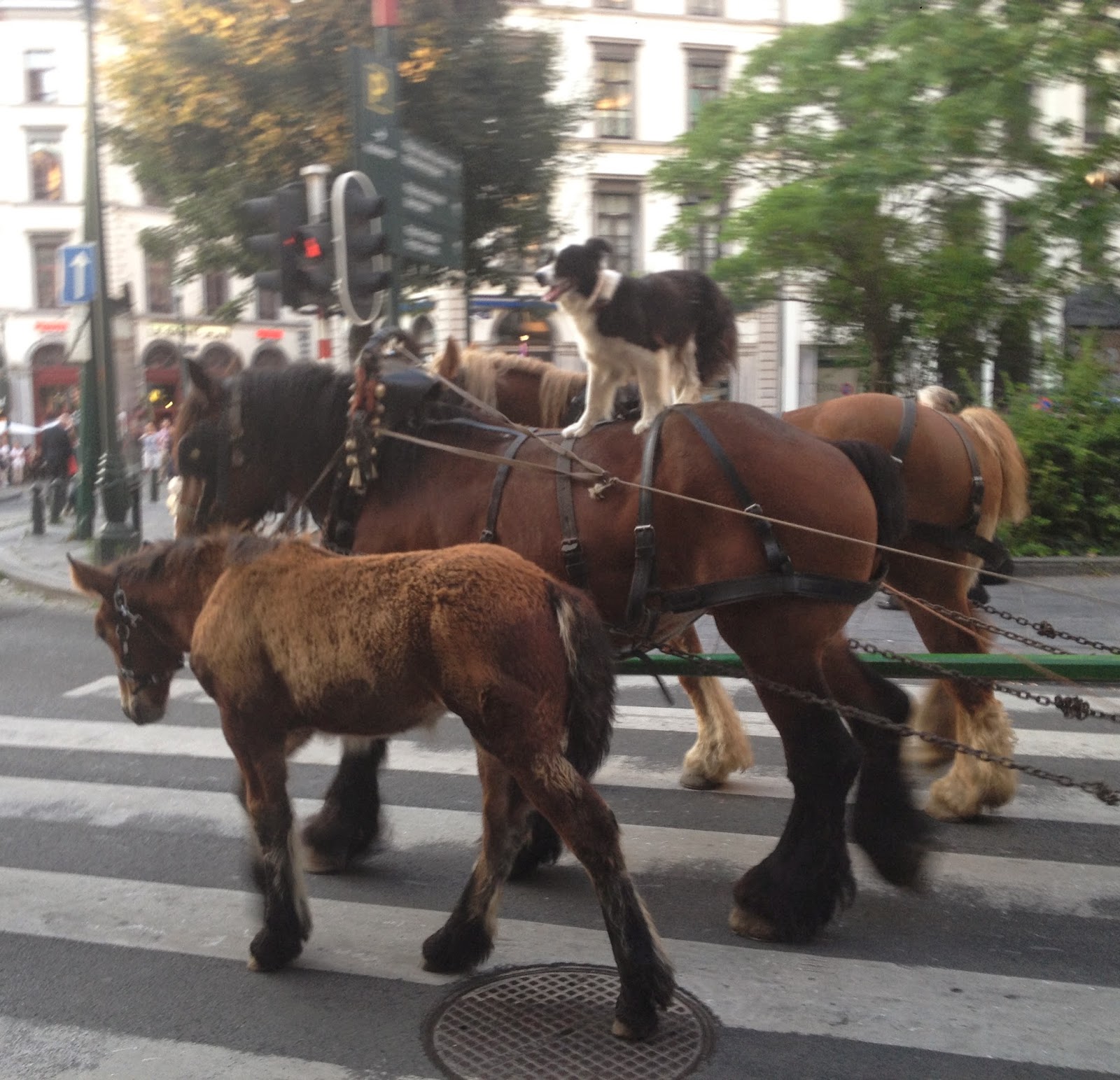 Oh look, the best thing in the world again.

Anyway. It was the most amazing, clear, sultry night and the sunset was beautiful and everyone partied like it was 1549. Even though I broke the children by forcing them to trudge around following a medieval parade for over an hour, I am unrepentant and cannot wait for next year. I WANT TO TAKE PART. Someone fake me an 8th generation bruxelloise identity please? I will happily wear unflattering mustard tights or shovel horseshit wearing a ruff or ANYTHING.

- I went to sleep in a Cube in the Ardennes last night. Sadly it broke, but it was a nice idea. "It looks like a microwave!" said someone on Instagram, quite accurately. But a very high class microwave. It was quite an eccentric experience generally: we also went out for dinner and the man on the next table fell asleep over cheese and snored loudly. Prior to that, we went to Dinant and got a very gloomy tour of the Citadel, majoring on German atrocities and torture and executions through the ages from a grim tour guide. So that was instructive, if short on laughs.

- I am on strike. I have been on strike for about a week now, but no one appears to be greatly inconvenienced by it. I have no demands or grievances, just a total inability to get down to doing anything worthwhile. I have no ideas, no brain, nor even my usual motivating anxiety. I have concluded this must be one of those necessary fallow periods (see also 2012 in its entirety) and have fallen back on reading lots, see 'reading' tab. What shall I read next? I have several things downloaded including Luminaries, but I am not sure I'm game for it. I thought it might be time to tackle Stendhal too (I will end up reading tawdry crime, of course).

- A surfeit of sport. I haven't been exposed to this much sport since I was avoiding revising for my A-Levels. Both my father and Prog Rock were stirred by the arrival of the Tour de France in the native lands. Prog Rock "cycled out to Poppleton to avoid the crowds" and my father just texted me to look out for Leyburn, which I did, but the dreary, dry stone wall-obsessed, commentary finished me off before they even got to Buckden. We also went to watch the Belgians play football in town on Saturday, but it became quite morose quite early on and the mournful sound of itinerant vuvuzela salesmen became unbearable.

- One of the hens has become extremely proficient at escaping and consequently we no longer have a garden, just a heap of scorched earth and some bedraggled strands of lemon balm (sadly indestructible). No one has laid an egg for days because the escapee hen is wild with the intoxicating draught that is freedom and the still captive hen is wild with confusion and frustration.

- Discussion with the children before they left on very extended grandparental holiday to Normandy campsite, fifth year running. We were watching The Vamps on Friday Download and I was ranting, as usual, about how the Vamps are all twelve years old and not remotely rock 'n' roll and they were ignoring me, as usual, until:

F (not looking up from Rubiks Cube 5x5): You are too old to be famous.

E (cut off in full rant and slightly wounded, but recognisant of the truth of this statement): You are probably right.

L (animated): No! She could be like that old woman on Britain's Got Talent!

L: You know, the singing one.

F: (totally earnest) Ouais! Or you could be like David Attenborough?

E: There will be no more pocket money for you. Ever. Serpent's tooth, etc etc.

I am sending them both to borstal.


Neither up nor down

I locked the dog out on Friday, totally by accident. I took him for a walk, came back, started working, then after ten minutes or so, someone rang the doorbell and I could hear weepette's usual frantic barking, just ... very faint? So I went to the door and and standing there were two confused looking neighbours and an even more confused looking weepette. I have no idea how it happened. He doesn't seem much more traumatised than usual.

I love your blog and I love the percentages even more. Here are mine:

40% - vague sense of anxiety over a task I was supposed to do but have clearly forgotten
20% - sunless tanning lotion (the smell!)
10% - Hershey bar, which I am already regretting. If you're going to have chocolate, may as well have the GOOD stuff, not waxy stuff.
30% - meanie mom for taking away ALL the screens and making the offspring do chores

I would SO read your book on Belgian folklore. My goodreads Belgium shelf is pitiful

Between here and Twitter that's THREE firm orders for my folklore book! VINDICATION.

50% panic about my kids birthdays tomorrow (they're not twins -I just have appalling planning) and the impending baking production-line evening of doom ahead of me.
25% in can't-be-arsed mode at work, which is bound to bite me on said region sometime soon.
15% Domestic chore procrastination (protracted laundry apathy = now down to just an ill-fitting, greying, sports bra)
10% Randomly capitalising nouns in English (due to improving my German)

By the way: I would also LOVE to read your Folklore book! (and your blog is wonderful, by the way)
A simliar modern/traditional thing happens here in Bavaria - wearing of Dirndls/Lederhosen whilst using laptops, plus a very casual approach to health and safety: At a festival in traditional dress, drinking lots of beer? Then what you need is 6-inch nails, some hammers and a log. Kids want a go? No problem, just get a shorter log...(this is the routine at our local town's annual summer festival)

Read: All My Puny Sorrows by Miriam Toews. Hysterically funny and also sad. You of Quaker background have nothing on the Mennonite-afflicted. :-D
Brenda

BDM - Yes! Read a review yesterday, it is definitely high on list.

Have you read The Goldfinch by Donna Tartt yet? It is utterly, utterly amazing and a great way to forget about the fact that you should really be doing something more productive. Take it from me.

Robin - Oh yes. Read on holiday last autumn, it had me completely spellbound.

version of Watches Replica the Superocean Heritage. “Chronoworks” is a term I haven’t heard before from Breitling, Designer handbags and it sounds like their version of a tuning shop where they tweak movements for better performance. Replica Rolex Watches In this case, the Breitling Chronoworks team began with their already in-house-made handbag replica Breilting caliber B01 automatic chronograph. Breitling points to “five innovations” UK Replica watches in the movement which.

good regeneration process, which suggests that the water tankless electric water heater of a salt setting of 6 pounds. The quick regeneration duration nice.