Up since 4:45 due to lack of curtains chez Papa Waffle, then onto the packed 6:50 train and instead of the baby, this time I had an Australian primary school teacher sitting behind me who talked for 2 hours without drawing breath to her wretched companions about her teaching method, which was apparently variations on a theme of NEVER SHUTTING THE FUCK UP.

In Peak Anxiety mode over the past week, I went back to my disgusting habit of peeling all the skin off my left foot. F caught a glimpse of it yesterday and retched and now everyone is avoiding going near me and behaving as if I have cooties (fair enough).

School is over for 9 weeks. NINE WEEKS. My children have reacted each in their own entirely typical fashion. L put his pyjamas on at 4pm and constructed a giant "reading nest" out of 2 duvets and 7 pillows, into which he dragged an artfully arranged trayful of snacks. I have not seen him since. F ordered a 5x5 Rubik's Cube on the Internet and spent the remainder of the day watching YouTube videos of introverts solving said Cube with monotonal commentary.

House looks and smells like a crack den, but where crack has been substituted for Daim pieces and hardened giant jelly reptiles. And discarded socks.

The computer is resurrected! Thanks be to Saint Steve of Jobs. I tried all the things they told me to do on the phone and it did nothing, then I took it into the shop and the guy did exactly the same things and it worked. Magic nerd fingers.

My back is also significantly better.

We had a most entertaining time at the peculiar ceremony bestowing the Order of the Rising Sun with Neck Ribbon on my father at the Japanese embassy. There were giant circulating platters of incredible sushi and weird and delicious things on skewers (beef wrapped snow crab, anyone? All the proteins).  My father gave a lecture on The State of the Universe the basic gist of which was that my children's generation is absolutely screwed, unless: science and then we all drank heavily. We had lots of fun with L, who has been learning Japanese for nearly 2 years and who, when quizzed on appropriate polite phrases to introduce ourselves to the ambassador, said he had did not know.

"I can say lots of other things"

"Right. Well I'm sure that will come in handy."

Eventually, he did manage to introduce himself without drawing terrible shame on the British/French/Belgian nation and say he was learning Japanese, then, flush with his own success dispensed all manner of advice to the rest of us like "you have to put desu on the end of everything or it's rude" and "never cross your chopsticks" then explained how to say your apple and clock were in the car. Just in case, like.

Later, we had dinner with the ambassador. The children and their cousin were left behind in my father's house of infinitely breakable and valuable things, with as many Hula Hoops and sausage rolls as they could cram into their small bodies and unlimited quantities of Minecraft. There were no sausage rolls or Hula Hoops at the ambassador's, but many many tiny and beautiful looking things that I was quite frightened to tackle.  I copied the man opposite me, who was an embassy official. Next to me was the head of the Atomic Energy something something something, who also played backing trumpet for Elvis Costello once, an impressive portfolio of achievements. I am not quite sure what anything was, but it was all amazing, except for the salty cherry blossom tea, which was a step too far.

My anxiety has greatly subsided as I enter "fuck it" mode once more. It's always one or the other.

This new rice paper roll shop is insanely delicious. I could eat twenty a day. The dipping sauces! I die.

Now please excuse me because I am going to bed with a novel and a Cadbury's Caramel because everyone has gone diving in a murky reservoir near Charleroi (I assume it is like the reservoir full of dead livestock in that French zombie thing, The Returned) and I wish to continue totally winning at Saturday.

A picture:
The closest I will ever get to an honorary decoration: 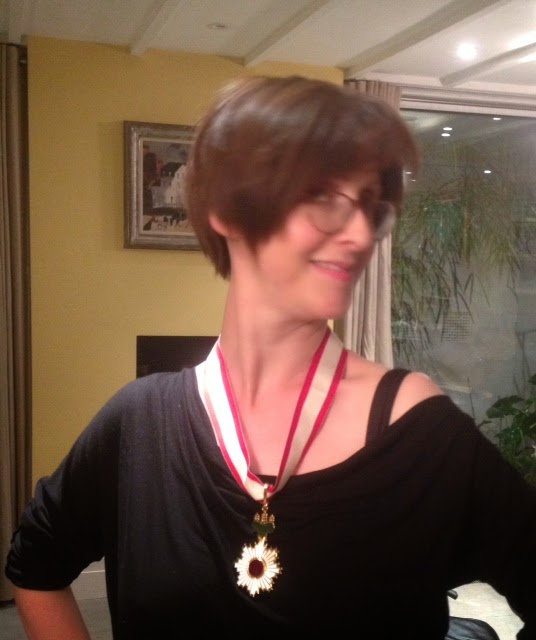 I note this outfit makes me look like Jenni Murray and for all the love I have for JM, that is not how it looked in my head.

Les Revenants! THE BEST ON TV EVER! (Had to watch all episodes one after the other obsessively lest there was some Unknown Thing lurking and popping out of the TV unawares. Like. So.)

Congratulations to papa Waffle! It is a particularly fine decoration.

What to say? Beats the feckin' football, by a long stretch. Particularly like the apple, clock, car bit.
Very funny. I have some katakana cards somewhere that I purchased in a bout of enthusiasm some ten years ago when I misleadingly thought I might teach myself Japanese.
I still like the drawings/signs/squiggles.

I am terribly envious of your rice paper roll restaurant.

Also I would like my child to go to sleep, as I wish to shower and if I do it when she is in bed but not yet asleep she is sure to hear it and wander out to haunt me just as soon as I am thoroughly naked and soaking wet. Just when I think she surely has gone to sleep she calls me urgently to tell me something utterly non-urgent. Mama! MAMA! MAMA!!! We should make sand soup for my dolls tomorrow.

PS. Hot tip: if your four-year-old daughter is urinating in a way that is perilously close to escaping the toilet, don't try to remedy this by saying "careful! Look where you're peeing!" because she will then tip her pelvis back to literally look at where she is peeing. Yay! Piss all over the floor!

Rice paper roll shop! I went and looked. So gorgeous! I make them at home, but mine are always sad and flabby or bursting.

I can appreciate a good 'fuck it' mode. Beats anxiety by a long shot. Congrats to your papa.

Apple hasn’t said anything about its next iPhone -- or phones for that matter. But as with most Apple products, details have begun to leak to the public. Here’s a closer look at all those details so you’ll know what to expect from Apple when it unveils its next iPhone later this year.

for beginners like me need a lot of reading and searching for information on various blogs. and articles that you share a very nice and inspires me . jual obat aborsi

I am really very impressed to see this, I’d recommend you to have a look at our Jaipur escorts – call girls in Jaipur and Udaipur escorts

I really experienced studying your posts. I came across this as an useful and fascinating post, so i think it is very useful and experienced. I would like to thank you for your time as well as you have created in penning this material. independent Escorts in Udaipur