Bad mood: weepy, moping around like bored teenager but even more annoying.

Having one of those twice yearly mid-season wardrobe meltdowns where there is absolutely nothing I can wear. It is still too cold for bare legs and too ... June for black opaques. My Prozac trousers have lost their button, so I am condemned to: the dirty jeans or the marginally too tight jeans with the hole in the crotch or the not very me bright green jeans with the hole in the pocket. None of my tops fit, or if they do, they have holes in. Maybe I'll try the cropped trousers yesterday, but I look like a scout master in them.

On Wednesday, I had to have the rat put down, which was wretched and difficult and also something of a relief. Poor little thing and poor L, who has had terrible luck with his rats. I really felt for him. I also felt for the rat, who, despite having a luxuriously gigantic cage ("Ferret XL" model) and lots of toys and fun and a devoted owner, did not really have a lovely life and who was far more sociable than the previously deceased rat. We are all in agreement that there shall be no more small creatures in cages. Not to mention that the whole rat ownership endeavour probably racked up €250 vet's bills. We could have had gold plated rats for that, like something you could buy in those weird dictators' furnishings shops on Wigmore Street. Or stuffed ones, playing tiny fiddles. Or adopted 4 Hero Rats! We are adopting a Hero Rat in Peanut and Houdini's memory.

Proposal was supposed to be finished by today. It is not. There is not even anything I can do about it right now because all elements are currently out of my hands. I am nevertheless fiddling. Unwisely. And rending my garments.

All my bills are due and I must screw up my courage to check my bank balance, which I know for a fact will not cover half of them.

Bastard Netflix can now pierce my Cunning Digital Veil of Anonymity that I bought for a couple of quid a month and knows I am in Belgium, which means no more Netflix, which means no new series of Orange is the New Black for me, bastardry of bastardries.

Spent two hours looking for lost Blue Peter badge this morning without success and now I feel oppressed by the acres of clutter at which I was forced to look. I usually turn an extremely blind eye.

OH GOD THERE IS YET ANOTHER PUBLIC HOLIDAY COMING UP WHEN WILL THIS TORMENT END.

Children have discovered and fallen in love with Father Ted, so now we can just all sit on the sofa bathing in our collective adoration of Father Jack. So far we have done: hairy hands, my lovely horse, small and far away, the very dark caves, the King of Sheep, Over 75s football and, of course, Bishop Brennan and the rabbits. Not so long ago when their English was really ropey this would have been unimaginable, so I appreciate it all the more. It is all down to British television, truly. "TV gave me back my children". Though, with the interminable, agonising semi-finals of Britain's Got Talent which they have required me to watch in full, it has also nearly caused me to sink into a catatonic state.

And a vast perfect Aperol spritz in the hazy sun. Thank goodness for food and booze and detective novels.

Lovely friends, sadly distant and on email, but nevertheless bolstering sanity and causing me to cackle with rudeness, comparison of facial blemishes and surfing goats.

Yesterday we entirely by chance happened upon the open day at the church up the road, which is at the highest point in Brussels and a peculiar, vaguely Art Deco 1930s thing, made of concrete and 'like the Empire State building', as L describes it. When we were poking around the inside, an elderly lady came up and told us we could climb right up to the top if we liked, and then accompanied us as we did just that. It was quite odd, since she (i) did not know the way and (ii) claimed the church dated from 1913, then (iii) cavalierly rang the church bell at about a million decibels nearly deafening us, so maybe she was just some random mad person, anyway, we got right up to the top and I was only nearly sick twice with vertigo and the view was magnificent. 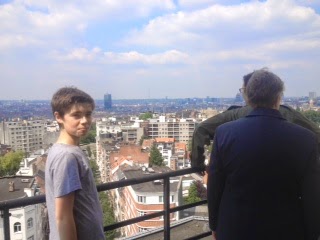 The top, with some other confused people the woman had escorted up there, then left, with a vague exhortation to "be careful". 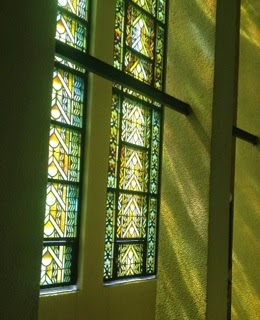 The bit with the hideous view down into the church that made my legs go funny.

Having bought gratifyingly tiny skinny jeans, I've had to mend them twice with iron-on interfacing, so maybe pretending I was that small was a mistake.

I also decreed many years ago that we would have no more small caged creatures. This was accepted by children but not by husband, who is now into tortoises. Not that they're caged, but I only really want animals that can follow me around and tell me when they're hungry. I value a degree of independence.

Clothes and bills are rarely worth becoming too worried about. It will work out. One juggles and then finds the crisis has passed again.

I too am in a state of no clothes that fit, I like or are weather appropriate. But I am still resisting the hamster craze which is hitting my daughter's class. Give me loom bands over rodents every time.

Monday can beckon all it wants to.

My behavior, oh, not surprising at all really. I have a vague memory of just collapsing in a heap of ativan and booze at the end of the week. Yes, 'someone should just kill me'--I begged every bit of turbulence on the way 'home' (but that's not the way it works).

Re: Netflix, did you not hear that they're officially launching in Belgium later this year?
http://www.reuters.com/article/2014/05/21/us-netflix-europe-idUSBREA4K03D20140521

Public holidays... when will the madness stop

Father Ted! I will never, ever get tired of the "My Lovely Horse" dream sequence.

Have you ever seen Black Books? Written by the same guy who wrote Father Ted (Graham Lineham?) and it's my absolute favorite TV show ever.

85% despair at the amount of work to be done and feeling so tired, uninspired and under so much deadline pressure all the time
10% vague anxiety
5% wishing I could just cancel Wednesday and wake up tomorrow with today's work already done.

As an adventure touring company, Enfield Point specializes in small-group, long-duration scenic and cultural motorcycle tours to areas of the world neither easily accessible nor commonly visited by most, especially in Himalayas. We cater to the experienced, self-sufficient rider who seeks a more challenging and unique experience.

Our resort in Jim Corbett, offers a perfect amalgamation of luxury and serenity. This is where each villa is tastefully designed to provide you an elegant stay and majestic views like Lush Gardens, Swimming Pool, River Fronts and more..

Wethecoders is one of the leading online assignment help services. wethecoders.com always take step towards your satisfaction. We work hard so that you can get good grades. Our prime motto is to help you to get good grades in your assignment, project and homework. Our team is professional and knowledgeable. We are here to help you 24/7. Try once to take the advantage of our services and we assure you that you will get surely the

Do you run an educational institute in India? Want to generate quality leads by promoting your coaching institute website on Google search engine? Well, Elite SEO Agency, a proficient SEO company for coaching institute offers absolutely niche based customized Google friendly SEO services with assured result and that too within timeframe.

Whether you have UPSC, IAS coaching institute, CA coaching training centre, or anything related to education category , we are ready to provide you the desired result as per your business requirements.

Call Now at 7634078909 to grab a Free SEO consultation from the certified SEO consultant at Elite SEO Agency.

Do you run an educational institute in India? Want to generate quality leads by promoting your coaching institute website on Google search engine? Well, Elite SEO Agency, a proficient SEO company for coaching institute offers absolutely niche based customized Google friendly SEO services with assured result and that too within timeframe.

Whether you have UPSC, IAS coaching institute, CA coaching training centre, or anything related to education category , we are ready to provide you the desired result as per your business requirements.

Call Now at 7634078909 to grab a Free SEO consultation from the certified SEO consultant at Elite SEO Agency.