I no speak pop up*

Do you remember my English Issue with the waiter in my Wednesday bar? Well, he has now been replaced by an exceptionally mardy woman, who ignores you for as long as possible, then serves you with an expression of withering scorn, probably something you didn't order. Yesterday, she threw mustard all over my leg (I was only drinking tea, so this required some considerable effort), then when I paid her, she disappeared and didn't return with my €1 change. I did not say anything, of course. I feel much more comfortable with her. I don't know what the moral is here, but probably that I don't deserve happiness.

Yesterday I had to go to London at the absolute last minute so I am tired and confused and severely out of pocket, but vitally, I managed to fit in a highly satisfactory session of drinking and eating with M. First we had pizza, then we tried to go for cocktails in Broadway Market but ended up in the most confused and shambolic cake pop up. A friendly but plainly bewildered Spanish man kept bringing us strange small cakes made of vegetables. M's one had giant strands of beetroot in, like someone had gone a bit mad with a spiraliser and I had to hide the chocolate truffle with gilt cornflakes in my napkin. They were playing mainstream pop hits of the early '90s and M and I were the only people there without giant beards. This would never happen in Brussels. M is moving to Glasgow soon, which is distressing for me, because it's basically impossible to get there from Brussels in a sensible fashion. Tsk. We'll have to meet up in Paris or something, which will be awful, all those eclairs and steaks and ponies in the park. Poor us. 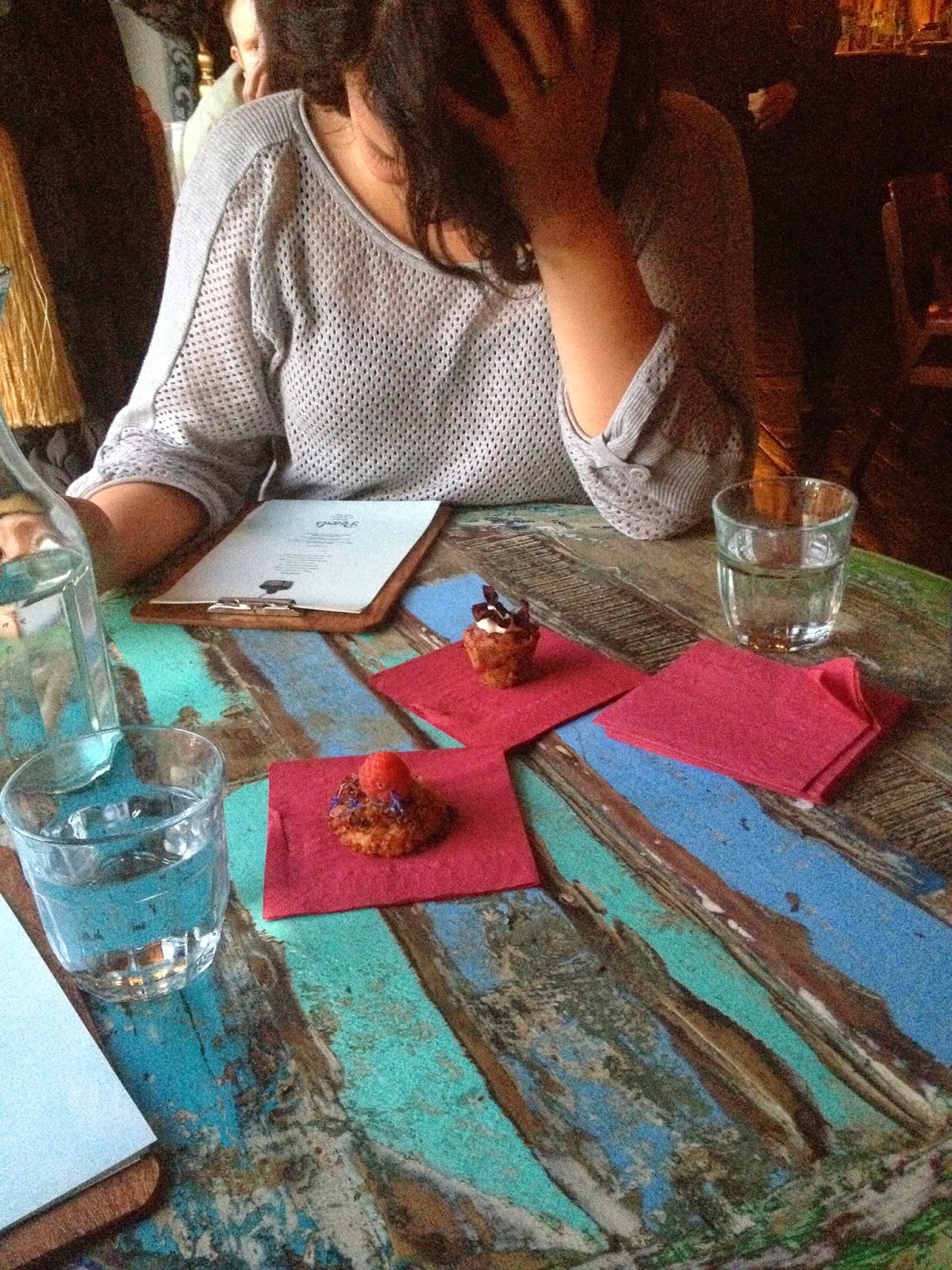 * "I no speak pop up", said M as we were getting more and more confused in Hackney.

My back is way better, thank god for drugs. However, I am an emotional wreck, which I suppose is a mix of bad back sleep deprivation, a crazy week of travel and exams and various logistical stresses, and the drugs. I am back on the train (yes, my perpetual travel companion the angry baby is here too) and have no confidence my last minute child wrangling arrangements will work out. I suppose at the worst, they could take refuge in the corner shop among the sleeping cats and cans of Jupiler and biscuits that they stopped making in the mid 1980s. They are resourceful children, I am sure it will be fine.

The local grapevine has informed me our death-threatening, saxophone-abusing neighbour has gone to Africa for 6 months to "work for an NGO". As M notes, this sounds like the kind of thing you might do to a reprobate younger son in the 19th century, one who had got a scullerymaid pregnant or accumulated gambling debts. I'm not sure I envy the NGO in this scenario. In the meantime, everything is pleasantly quiet.

The cake thing sounds perfectly revolting. And wtf is a 'spiraliser'? I remember when Broadway Market were nowt but Londis and a fishing tackle shop. Bet that's not there any more. Priced out by those beardy cake-pushers no doubt.
But otoh, Glasgow, yeay! I'm afraid I can't suggest a secret and marvellous means of getting here, but you can fly Ryanair from Edinburgh to Charleroi, which is probably like saying you can fly it from Gothenburg to Bristol in terms of convenience, and would certainly preclude day trips to pop-up cake shops in Sauchiehall St, but still.

99% should be getting job with imminent deadline finished but am instead here.
1% should also be at kids' sports day but am skiving on account of the above-mentioned 99%

bad waitress week across the globe!!

I handed our (sullen, slower than sludge) waitress a $20 bill and clearly asked for change when she (finally) gave us the tab. "Oh, THANK YOU!!" she cried and sped off. 10 minutes later she returned to the next table and spied us still sitting there with the tab and a credit card on it and nothing on the "tip" line, and asked "Oh....did you want change?" "yes, indeed." Gaw. How she could ever have thought she earned a $20 tip? I think some of them in that place are high on something.

BL - I keep reading about these "spiralisers". It is a thing that you use to make long strips of raw vegetable as if you were Gwyneth fecking Paltrow or similar. I sort of want one whilst knowing I would never touch it.

Oddly enough, I was shortchanged a dollar this morning by a very friendly, cheerful guy. Therein lies a difference in longitude, the surly ones here tend to be honest. Positivity is just a way to make, well, a buck, apparently.

Reading an interesting biography of Margaret Fuller (female journalist pioneer). By page 12 she feels she is madly in love with a twenty-something English woman (she was eight at the time). The woman returns home and marries a 'socially acceptable Englishman' (as opposed to, say, an eight year old girl in Massachusetts).

40% looking forward to collecting eldest child today after her return from "classe verte" (Lord of the Flies pre-school, judging from the photos)
20% stressed by colleagues about publication of a press release this afternoon
30% concerned for wife after last night's emergency surgery for a detached retina (she's fine, but off work for a while)
10% couque suisse

Please move to Scotland with M, preferably east coast though.

oh waffle, i am concerned that sax-playing dodgy neighbour will end up in Ghana with my kid( also working with an NGO) and it could all end in tears.
I love the sound of Mrs O the Goat. he sounds fantastical. Here in Ireland we have The Puck Fair, an elaborate drinking festival that involves catching a wild goat , putting it in a cage for three days and then crowning it King. My own little kids will need plenty of encouragement if they are ever to be in the running.

Down:
10% anxiety over The Child going to deepest Africa and remote possibility of meeting deranged neighbour
50% drug cocktail for slipped disc seems to be turning me into Quasimodo. < The Bells , the bells>
10% heat rash from sudden onset of summer
20% stripey fake tan rendering appearance of molting giraffe
20% 99 icecream cornet down black dress

Dear Waffle - sorry to post off-topic, but wanted to make sure you knew abut this:

I saw the drug was only approved in 2012, and thought it might be worth showing you. (Sorry if it's old news to you.)

I'm very sorry to hijack your comments section with my tale of woe, but your blog is a comforting place for me to visit and I'm having an absolutely awful day.

100% very depressed after an almighty row with my husband, who exploded over something completely trivial yesterday and is now blaming me for the demise of our relationship (which hasn't been in the best shape for a long time, actually).

He is incredibly stubborn and domineering. He took something lighthearted I said in jest and twisted it around in a totally paranoic way so he could blame me for supposedly offending him greatly. I simply could not believe that he was going to blow things out of proportion like that but that's exactly what he did. We were on a train and he started to raise his voice so I got off at the nearest station; he followed me onto the platform, giving out shit to me in front of other people. When I asked him to calm down and stop shouting (people were staring), he was incredibly rude and basically told me to f*ck off). I left the scene in a rush (I basically ran away), completely humiliated and upset. He came home several hours later and went straight to bed in a different room. I spent the entire evening in a state of shock.
There was a "showdown" today and it was very ugly. He started by saying that he wanted an explanation for the offhand comment I made yesterday "so that he can make his decision" and then said he wanted to discuss the best dates for him to move out while causing the least disruption to the family. The gist of his narrative is that it is all my fault for hurting his precious feelings. I told him not to delay at all, the sooner the better, because walking on eggshells constantly is no way to live my life and I am tired of his resentful, bitter attitude towards me. After about two hours of accusations and crying, he started to backtrack and apologise for all the horrible things he said to me (for example, that I never wanted our first-born child, who was not planned but whom I love very dearly, probably all the more to compensate for my initial shock on knowing I was unexpectedly pregnant way back then). I literally cannot believe that he would throw that at me twenty years down the line.
I feel utterly broken and sad. He is now trying to patch things up, saying that it is all because I hurt his feelings yesterday but apart from that everything is FINE and he wasn't serious about wanting to move out. I have apologised for hurting his feelings but insisted that I really don't feel that what I said was adequate grounds for such a monumental row. That I'm really tired of tiptoe-ing around his moods and never knowing what to expect. When the row started yesterday we were on our way to a restaurant for dinner. I made my way home and he went on ahead to the restaurant and had dinner, because I saw the receipt on the table. And he has the gall to accuse me of being heartless because I didn't text him "to see how he was". So damn self-centred!
My rational brain says it's time to act like an adult and say that enough is enough, please do move out and take your unpredictable bad moods with you. And yet...I'm not feeling strong enough right now.
As I said above, I'm sorry for hijacking your comments with this. I suppose I just need some reassurance. I suggested we go to a therapist and talk about what happened to get some objective feedback (I really doubt that his version of events would withstand any external scrutiny) and he point blank refused and said that he does not authorise me to talk about him to anyone, even a therapist.
I just want to crawl under the bed and cry.

Oh, anon, I am so so sorry you are in this situation, it sounds just bloody horrible. You poor thing. Could you see a therapist or a counsellor without him? I don't really think he gets to "not authorise" you to talk about something so difficult and distressing and you need a safe place and person to get your feelings straight.

I wish I could give you an awkward, British semi-stranger hug. Not that that would help, I realise.