Hello. I am still reeling from a weekend of back-to-back child events: the school fête, a genuinely endless guitar recital, and the chaotic Festival of the Godless, where apparently L had to dress up as a binman and lie on the floor for an hour, then throw cushions, both of which actions apparently had something to do with Plato, no, nor me. My only involvement was logistic, thankfully. Apart from that, I have mainly been hunched like a balefully roosting fowl at the kitchen table, working, having got very behind on, basically, everything. My observations on working:

1. I am a really shit multitasker. When faced with the need to multitask, my preferred option is to fling my hands in the air and consider resigning from at least one and possibly all of the things I am supposed to be doing. I don't go through with it though, because I am also a massive coward.

2. I also really need to shut up about Zola. Shame I have just ordered another book about Zola, then.

3. The worst thing to try and do under time pressure is be funny. When you're desperately googling 'Channel Tunnel jokes' you know you're in the shit. I didn't find any, although I did find a massive seam of awful, somewhat racist jokes about the French.

4. That thing about only truly knowing someone when you've seen them deal with crappy wifi = so true. Obviously, I am an arsehole. Though not a fighty, angry asshole so much as a pathetic, whiny one. I lost two days to the broken internet and Bastardcom, my internet providers and it was about as much fun as it sounds.

5. Aromatherapy Associates Deep Relax balm, whilst a good idea, is not nearly as effective as the bath oil, probably because I am not lying in the dark and the warmth at the end of the day whilst using it. I have ended up smearing it all over myself like Vicks Vapo Rub, so I am greased and aromatic, like a leg of lamb, but not notably relaxed.

6. Does that sound gloomy? I am, a bit. Writing and editing again and again about the most horrible parts of you life isn't a mood enhancer. I got really miserable working this weekend (though that could also be attributed to the interminable guitar recital in a dark hut) and then cried this morning at the thought of starting again. Why am I doing this? God knows.

In other news we have had to empty L's bedroom for some building work and it has been a massive nostalgia-fest. I was quite moved to see my old friends "Aaaaargh Spider", 'Diggers are good at dig dig digging', Commotion in the Ocean and, 'Close Your Eyes' in which a weary mother tiger gives her annoying infant some old flannel about the moon and stars and so on (basically a polite 'Go the fuck to sleep'), all of which and more I can still recite by heart.  L exclaimed over a range of deathless classics of his youth including 'Pokemon Diamond and Pearl Find the Pokemon', 'That's Not My Digger', 'Les Pelleteuses' (notice an earth moving theme emerging?) and, implausibly, 'The Christmas Mice', which I was trying to shove into a binbag.

L: Noooo, you can't throw that away!

E: Why not? I don't remember a thing about it.

L: Yes! The mice! The mice of Christmas! Someone says that Father Christmas doesn't exist so the mice do his job.

E (flicking through): That doesn't seem to be the story at all. There isn't any story to speak of. Just ... some patches of soft fabric and shiny things.

L: (snatching it back) I LOVE books with soft bits. Look! This one is made of REAL KILT!

This was repeated about twenty times with similarly dreary volumes. After two hours we were both dusty, discouraged and hardly advanced at all, but had read a lot of picture books for small children. Also, if any Poké-enthusiasts feel like going through our bins, there are some 100 plus PV Pokemon cards in there now. Just saying.

A photograph, to break up this litany of complaint: 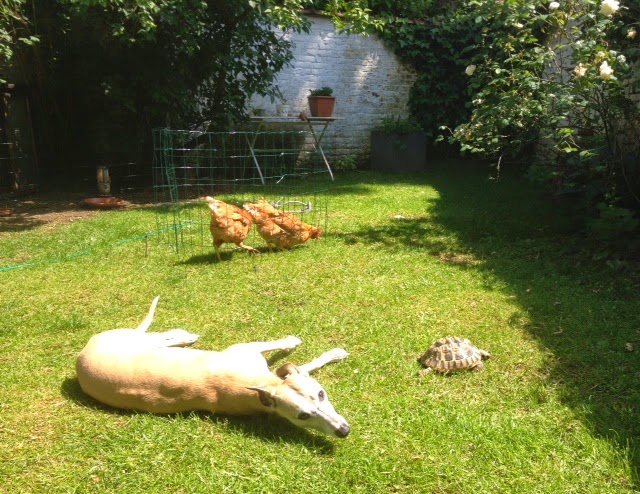 Current scene here. They have the right idea.

Ok, I am just avoiding going back to editing now. Time to gird my loins. That's a peculiar expression, isn't it? Why do loins need girding? Oh. So, 'tuck your dress in', really.

Your life sounds like mine. Lost a day (the day before a key deadline, natch) to computer woe yesterday; all 'spare' time spent ferrying children to summer gala/fete/Commonwealth Games type events, which sound terribly jolly on paper, but turn out to be a bit chilly, a bit windy and mostly obscured by BBQ smoke.

Our plumber is part of the Slow Plumbing Movement, it seems. They will be back tomorrow. The tiler said to me 'don't worry, we tell you when we're going. If we're not coming back, we just go'. I will have to try some of this Deep Relax bath oil if they ever get round to actually fitting the bath.

My kids used to love 'Aaaargh Spider!' too. We found it stuck down the back of the sofa when we moved house and I was overcome by a wave of nostalgia. My tip for clearing out stuff is to wait until everyone goes out, take a bin bag and your arm and just sweep everything into the bin and make a dash for the dump. They never notice.

Old flannel about the moon and the stars? Are you referring to the much-revered, overrated Goodnight Moon? (But those were bunnies, not tigers.)

Work--I actually caught myself envying laborers in Qatar yesterday. (No emails! No cubes!)

5% lingering jet lag
50% phlegm
45% despair at facing another day in my gray cube of doom.

Why are you doing this? Would failed relationships help? Saw this recently.

I won't lie to you, hokey bits, and trouble ensues. Of course no one would want to consider, for even a split second, what Elizabeth Bishop would think, but who doesn't want a studio built for them?

Thank you for the link to that film, Fray Antje, it looks brilliant.

10% work particularly dull this week
10% the accountant is in hiding and my resolve is weakening
10% more tax returns are looming
10% domestic drudgery
10% overweight but still furtively reaching for the nutella
10% ridiculously insufficient attempts at compensating with walks and exercise
10% daughter's exams at school around the corner(six in a weeks' time); supervising revision on the anatomy of cows' stomachs and all manner of cheery stuff
10% feeling increasingly estranged and alone
10% strange mix of despondency and anxiety
10% uplifted by your post today, so that's something.

Tuesday, it's time for Wednesday.

Dear Waffle, for what it's worth: your writing is so exquisitely beautiful. Only you can decide if it is worth the pain of reliving sad days to put them in writing, but as a long-time reader, I can only say that without a doubt, you will create something beautiful out of that pain because you are an incredibly talented writer.
I hope that doesn't come across as trite.

Frau Antje...I saw that last night! Can't say I loved it, but parts of it were brilliant. "I was born an architect!" Indeed.

Yep, we're on fire here too.

BL - A yes, the Slow Plumbers. I am familiar with their .. work isn't the right word, is it.

Patience - No, it was definitely a tiger and it was called Close your Eyes (FOR THE LOVE OF GOD SPAWN OF SATAN, unwritten subtitle)

FA - Elizabeth Bishop appears to be going out with Bobbi Brown in this film. INTERESTING.

Anon - What a completely lovely thing to say, I am really touched. I'm ploughing on because, well, Concorde effect really.

Oh that did make me laugh about the channel tunnel jokes, when we last went through the tunnel in my teeny car with roof box (so made to go in wagon with lorries and coaches) with my francophone husband there was not a lot to look at obviously but the advertising on the walls for duty free booze, the poster read for massive cartons of lager 'buy there get three free' honest to god, try to get any francophone to say that quickly, I had about 15 minutes at full speed through the tunnel making my husband repeat over and over for my entertainment , just add ' and I'll also give you a tree'. Now what young Brit in his first job advertising on Euro tunnel thought that one up just to mock zer froggies xxx

this made me laugh immensely, which was very timely because I was about to smash something in a fury. On the orange lipstick front, i have discovered a new, cheaper one called Estee Lauder Pure Colour Envy in Envious. It's a bit pinker than I prefer, but one can't have everything - it is looking cheap at £24 compared to the Tom Ford (i didn't buy it, i must confess). Also making me laugh is The Year of Reading Dangerously which I strongly commend to you - it reminds me of that post you did once in prob about 2009 about the books one lies about having read, which is basically the premise for this book: 50 books on The List of Betterment - it's a nice conceit for a memoir.

Yes, girding loins doesn't make much sense, but it beats the current 'suck it up' phrase around here which is: "Pull up your big girl panties and deal with it". Ugh. Please keep writing.