Games and no fun

It's taken me about 4 days to get around to writing this. Ridiculous. I can only hope I'm making more progress in other areas of my life (unlikely, other than 'gradual fattening'). Mainly I'm struck deeply stupid by sinusitis which makes me want to bang my head against a wall all the time.

1. Someone asked about the progress of the stupid financial etwas with Prog Rock. Well. We went back to Natwest and there was another lengthy slapstick scene around a form which perhaps did not exist, or perhaps could not be accessed by the customer service operative due to insufficient levels of clearance (like it was MI6 or something) and which was perhaps not even necessary or relevant. Prog Rock filled in the many gaps with a disquisition on Flann O'Brian and a lengthy anecdote about his brother-in-law's farcical dealings with Virgin Media. When it appeared that we would be getting absolutely no etwas at all, he discovered a sliver of steel in his soul and asked the lady to leave us alone so we could discuss things in private. A minute later, the manager was there (as an aside, I have never in my life seen a person who so closely resembled a potato) and we had a - possible, tenuous, could still be contradicted - assurance we could complete proceedings without both travelling back to London. Nothing has happened yet to progress this. We shall see. Or we shan't. I would like to state for the record that all such proceedings have been in pursuit of an additional 0,000001% interest on the relatively modest amount of money of which we are trustees. Prog Rock takes his fiduciary duties very seriously.

2. The gymnastics spectacle - DEAR BABY GOAT JESUS. It lasted two. whole. hours. Of that time, approximately 80% was dance and a bit of baton twirling by the same small group of girls. F finally appeared ten minutes before the end, climbed the climbing wall once, and span a plate on a stick in his "buffoon" costume, thus: 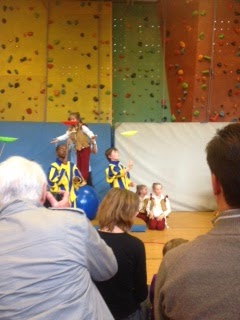 The musical accompaniment was overwrought and terrifying - the woman next to me obviously enjoyed it because she Shazam-ed several Celine Dion-reminiscent tracks for repeated enjoyment at home - the view obscured, and the hard school benches akin to torture. F had to take part in TWO two-hour performances, and even he admitted it was a little protracted, though he was glad to have taken part, strange small child. This Saturday is the main school fête. I'm not really sure I can cope.

3. Speaking of horrifying school performances, look at this picture someone from Quaker school posted on Facebook! 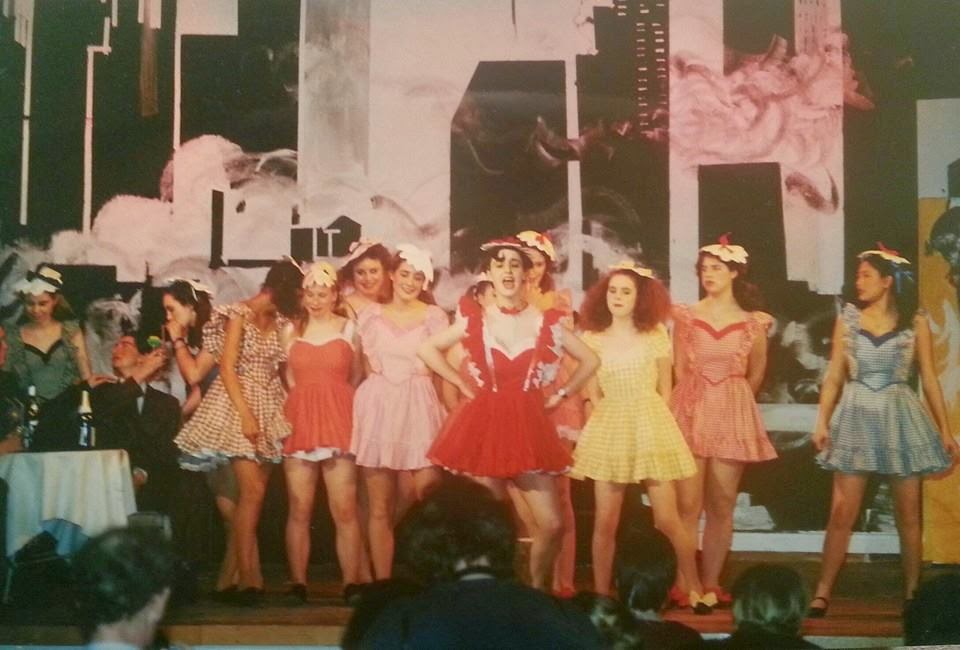 That is me with a paper plate on my head at the front in Guys and Dolls. I'm still a bit perplexed where the person who was totally cool about, indeed relished, dancing and singing and wearing that has gone. I was quite outgoing and a joiner briefly at this point in my life, though I note my legs were the same peculiar shape back then as they are now, so that is something.


4.  I went to try a co-working place today, because I only ever speak to the hens and the Internet, and the Internet keeps breaking. I had quite a productive time and it was very pretty and stylish, but, slightly defeating the object, these were my only co-workers: 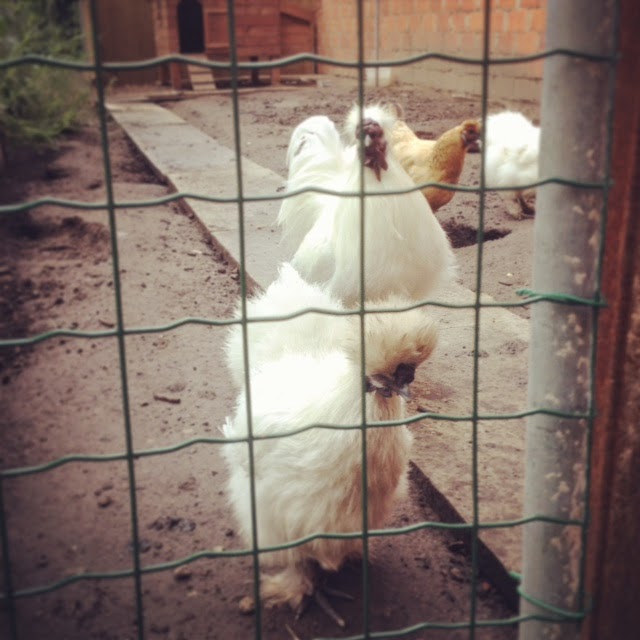 Maybe a different breed of hen is as good as a rest? That's almost certainly a proverb somewhere. The Internet didn't break either and there are no distractions or snacks in the empty white cube. I will try and return.

5. In sportsmanship fail news, today one child (I will not name the culprit) upturned a chess set in fury and yesterday another child cried uncontrollably because I got the trio of cards they wanted in Horrifying Trio Memory (a fiendish game where you have to locate three eg. sections of giraffe from 80 odd cards all featuring confusion sections of animal), whilst at the weekend I was forced to play FOUR successive games of French snorefest 'Mille Bornes' because best of three did not give my adversary his desired result. This is NOT my genetic material at work, my approach to all games is to give up (their paternal great-grandmother, however, would make us play game after game of dominoes, cry inconsolably when she lost, then force us to play again). I don't really know how to cope with such thoroughly un-cricket displays, laughing despairingly was apparently all wrong. Why can't we all just read books and sulk in our bedrooms? It's worked fine for me for the past 40 years and I sincerely hope to continue that run for another 40 (I make an exception for Racing Demon).

I accidentally left my coffee sitting in the French press longer than intended while reading this and now it tastes better than ever.

50% dread at tax declaration that needs to be done (I have changed my 'statut' so it's different from previous 12 years. ARGH!).
50% dread that at going kayaking with 29 x 9yos tomorrow.

On the up side. The 9yo's school fete is cancelled this year as they are rebuilding the toilets in the playground area as of 1st June => Double win. New toilets. No kermesse.

Are you wearing the red dress in the Guys and Dolls photo? Splendid!

The Guys & Dolls outfits look a little racy for a Quaker school. And there was me imagining heaps of quiet contemplation and the like.

Me:
99.9% bathroom-related anxiety. The plumber is sending me out to buy tiles today and my knickers are already in a twist.
0.1% cub summer gala related angst. Forgot to donate raffle prizes, have yet to bake required cakeage, will probably forget to go and be cast into eternal purgatory etc etc.

Oh, lord, sitting through that gymnastics performance in order to get a three-second glimpse of your son!

nothing saves energy like an AC that doesn't work!

BL - Quaker school was not as Amish as it sounds. Quite.

Trusted and adored someone. Heart broken.

Oh Tired. That is really shitty, I am so sorry.

FA - I'm going to be needing some Dristan, thanks.

OH MY GOD - the number of INTERMINABLE gym shows I have sat through - and where is MY medal?!!!

Shades of Lipman about your young performing self. I do mean this nicely, I promise.

Here's a link to a few photos of the four kittens. They come in various configurations.

WANT KITTEHS!!!!!
Except that the 2 I already have would be mightily put out and might try to kill me in my sleep. But still, so much cuteness!

Fingers crossed that you and Prog Rock's fiduciary duties attain some level of achievement soon. I am in awe of your brother's calm. I would be sobbing uncontrollably by now.

Take every chance you get in life, because some things only happen once
cara menyembuhkan penyakit tulang rapuh osteomalasia