I will be bankrupt by the end of the week attempting to amuse/clothe/feed my children during their Easter holidays. Today was already ruinous. We went to the toyshop so they could each buy a thing to amuse themselves over the next week so I could, you know, work. Unmolested. For the odd twenty minute stretch. L chose 2 DIY "fun" kits both of which require extensive adult involvement. One is a "space age garden" for which I have to boil up my own agar agar or something equally sordid. The other is a "make your own sweets" kit which, it transpires contains no sweet making ingredients at all, just a crap plastic rolling pin and some optimistic recipes. I suppose I should be grateful he spared us a rerun of the dreaded triops. F got a 1000 piece jigsaw of, I dunno, an Austrian lake or something. It looks exactly like the kind of jigsaw your great grandparents did in the 1970s and why on earth this is what he wanted eludes me entirely. Unfortunately, enormous jigsaws are the weak spot in my otherwise entirely balanced and reasonable personality, ahem, and I have been unable to leave the fucking thing alone all day. It is SO HARD: basically it is 50% water, 45% leaves and 5% "what the fuck is that fuzzy blob". I have been trying to match leaves for about 5 hours and F had to actually physically prise me away from it this evening. There is no guarantee I won't go back to it now he's in bed.

The dog was violently ill all weekend after a night staying with a neighbour and it has been unspeakable and there is no kitchen roll or bleach left in Belgium.

The rat is not recovering well, though he has recovered enough strength to fight like a banshee and hate me with the heat of a thousand suns when I try and administer his twice daily antibiotics. Also L is getting pre-emptively very sad about his future/fate/sad life and there seems to be very little comfort I can offer. Pet ownership, eh.

I have to find stuff to amuse the boys for another 4 days.

I just flailed around at the table and broke F's piggy bank, like a thieving, piggy bank raiding feckless bastard.

I should definitely be working, not writing this, and it's twenty to 11 already, because of holiday bedtimes.

We were compelled to go to the commune (town hall/administrative centre of torturous crapness) today for L's new ID card and it was bewilderingly speedy: in and out in about 2 minutes. This has never happened before.

The boys are lovely company and haven't even really bothered to fight today.  I may be achieving nothing, but there's a daft satisfaction in just being around them, exhausting as their boundless energy is, not to mention the fiendish games of the Evil German Trio Memory (a jolly game in which you must match impossibly difficult to identify animal body parts, invented by sadists).

I had a lovely night in Spa at the weekend and rode an extremely old yet feisty and excellent looking Norwegian Fjord horse through the woods, along tiny paths and through streams and cantered around in the sunshine and it was everything that makes me happy. Look, here I am being happy on a small and sturdy horse called Caramel: 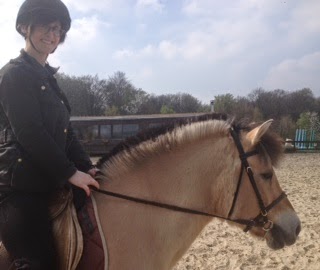 Another view of Caramel's magnificent coiffure: 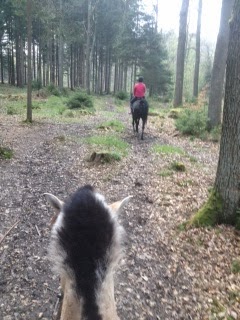 It can't be possible that I am the first to read this, can it? I am:

50% nervousness over telling my bosses I am unexpectedly pregnant. At 35. And I've just got through the worst of the toddler stage with my last.
10% nuts from healthy eating
10% pizza from 'other' eating
30% joy over being pregnant, regardless of the bosses.

Love the photo of you! Sorry about your dog horking everywhere.

Have you tried papier mâché stuff making with your boys? Loads of fun, easy to organize and costs nothing.

100% upset with my pessimistic boyfriend who keeps weeping about everything.

One of the up things today was hearing your father on R4 this morning. Everything after that was pretty downhill actually.

50% annoyance that I am the sole 'adult' responsible for the potential shenanigans of bored American college students who do not know what to do with themselves during such a long Easter break (hint: it will involve alcohol). At least your boys are both charming and non-drinkers.
10% vexation at necessary unpacking, sorting, laundry-related tasks after trip to Italy with aforementioned students.
20% despair over my imminent Dutch test next Tuesday, and no, I didn't study while we were in Italy, why do you ask?
15% big old cups of coffee and tea; espresso is all very well, but sooner of later one longs for a proper cup.
5% astonishment that it's so cold here. What's the big idea, Belgium? In Italy it is 25 degrees.

Lovely Fjord pony with two tone mane. Riding is the one thing I do, when I forget about everything else. Although I'm still trying to get my nerve back after nasty fall before I had my kids. Just got a 12 hh short fat grey pony for my 7 year old - I had a go on her, (I'm 4 foot 11) and had to get off very fast as too nervous! Feeeeeeeeeble...)

80% still lambing (got 5 ewes left to lamb. HURRY UP ewes!)
10% mucking out pony
10% looking after kids - which consists of turfing them out into our "back field" and watching them with a cup of tea :)

If you get desperate you can always take them to the cinema to see Spiderman 2 or Albator.
Surely they're old enough now that you could leave them there while you sit outside on a terrasse with a drink?

Have them design cars with clay.

45% Wishing I were a laconic Scandinavian investigator. #sogonnabefoundinaditchsomeday

20% Advice for change of position interview, which must unfortunately be done at home on Good Friday (If you want the job, I would not sit in front of the bookcases for this interview).

5% Seriously considering this for the wall at the end of the dining table, roughly a yard square, it'll do.

30% Inadvertently reading about Charlotte, one of Belgium's (apparently many) mad women. Her brother had to keep his children away during her penchant-for-stripping-down-and-whipping-herself phase.

What a lovely smile you have!!!

Great post you have shared in there. By the way, this might help your viewers interest and to you as well. Feel free to check our website! Snooze for Kids - A book that is created to teach toddlers and children bedtime strategies.