UP:
I am not dead, though I thought on a couple of occasions I might be close. I have finished the ghastly juice cleanse THANK GOD. It was not as hard as I feared after the first day (which was truly hellish), and I had the odd burst of energy/mental acuity but juice did get very very boring, and globally, my IQ definitely took a hit. Also, I will not be adding "nut milks" to my normal regime and I cannot wait to go back to consuming no liquids other than Yorkshire Gold and gin. I am an unrepentant fluids sinner. Also, I am relieved that it didn't make me nostalgic for the bad old eating disorder days or send me back down the path of crazy, which I slightly feared. As it turned out, I was delighted to break the fast of hell with rabbit rillettes and warm baguette, because, well, you might as well do these things properly. Now I feel a bit .. anti-climactic (no choirs of angels accompanied my first tartine), but relieved. Also, the joy of having my TEETH back is amazing. Why juice gives you such foul, furry teeth, impervious to brushing, is a disgusting mystery I do not wish to investigate further.

I have to confess to feeling quite energised and composed today, however. I am praying it's just coincidence, because there is no way I am ever doing that again. EVER.

My eldest child got into the bleeding Jesus secondary school all his friends are going to. This is neither a surprise (it's the nearest state school and it's all based on location) or a particular joy (it seems ... fine, if somewhat Jesus-y), but it's one less thing to worry about and he's pleased. I intermittently wonder if I should have been a bit more helicoptery about this education business, but I'm opting out of that particular fount of guilt. He reads books and has Japanese classes at his own behest (tangible signs of any progress: nil, but who cares). He'll be fine. All the Jesus will be good for his general cultural education. After all, this is the child who believed Jesus was called "Nathan" for several years.

The garden is looking much better after resolving the chicken ravage problem (larger chicken enclosure, supervised outside time only). This is a very low bar, but I am childishly delighted.

There isn't very much, actually.

Seriously, let's hold that thought for a moment: I cannot think of much to complain about, indeed I am outlandishly perky. This is unprecedented. Maybe the juice has readjusted my perspective? I no longer need to drink "The Hulk" so really, how bad can anything be?

(Retrospectively, crying on (i) a contentious phone call to which I overreacted violently; and (ii) the shoulder of a woman I barely know during the juice fast definitely qualifed as downs, but I was too weak and defeated to write about them)

Oh, I still need to find two animal webcams by next Tuesday since the tiger cubs AND the Norwegian puppies have gone offline. Woe.

Pinterest Easter crafts are breaking my brain (it's for work). Yeah, I definitely want to make an easter egg out of some pastel dyed yarn, a balloon and wallpaper paste. Or a miniature crucifix garden (L can make that next year in Jesus school). WOMEN OF PINTEREST: put down the glue gun and make chocolate crispie nests, if you really must do an Easter craft. Or you know, get drunk.

Getting a rat to ingest 0.04ml of antibiotic twice daily is ... interesting.

Phew, I found a couple. 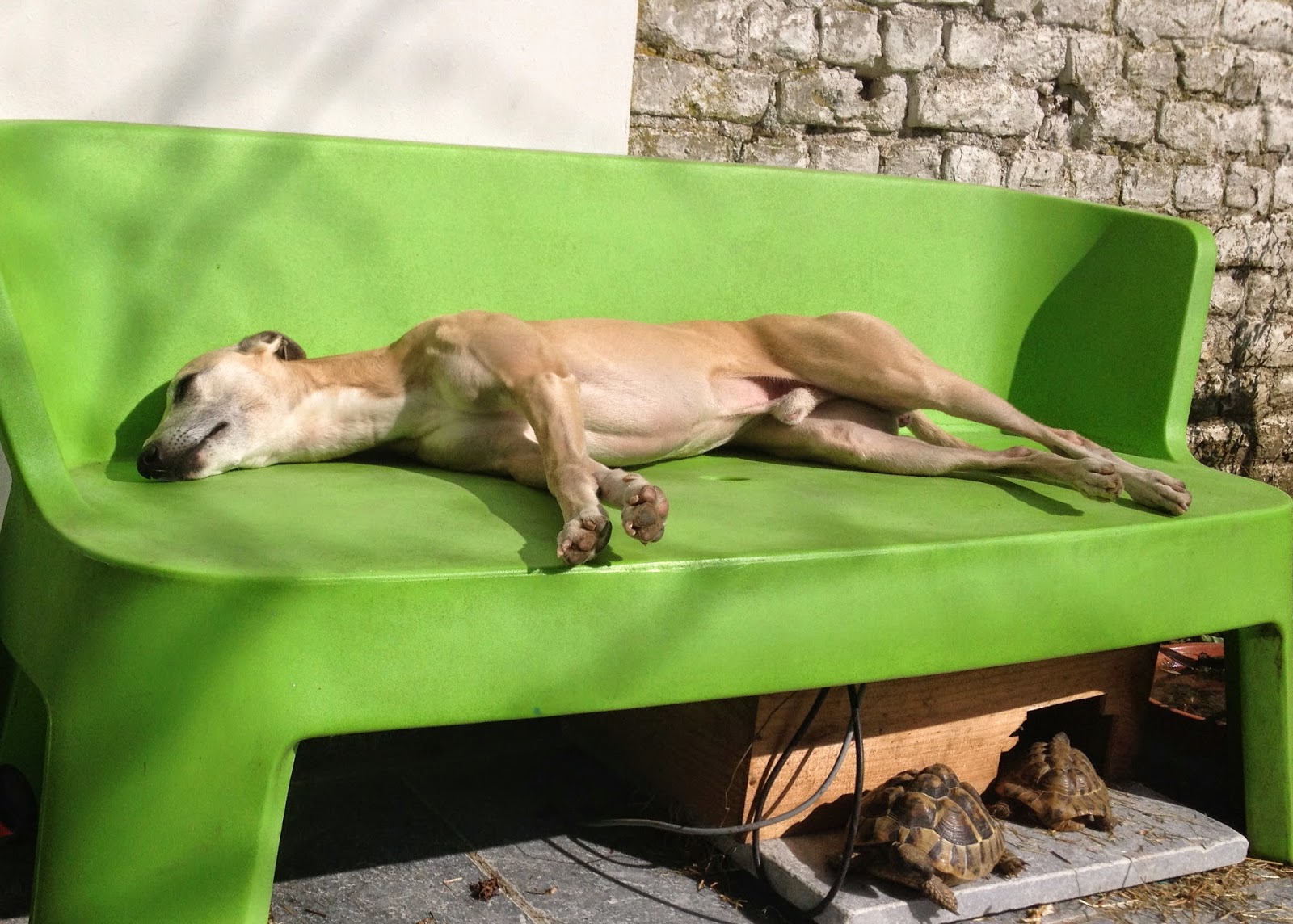 Everyone is enjoying the clement spring in their own, unique ways. Some are shitting on the doorstep and stealing dog food. Others lie in the sun until they are deeply confused and pink of nose. The neighbour mainly barbecues mackerel and shouts. I feel filled with the milk of human kindness towards them all. FOR NOW.

Mildly despairing tbh. Good things - many but Not Good Enough. Bad things - plentiful and persistent. Finding civilised human interactions a bit of a strain as want to shout and/or wail. All this provoked by ridiculous but essential work life, child in the throes of A levels and lingering ear ache. Maybe I should try juice.

Watch our falcons http://www.ntu.ac.uk/ecoweb/biodiversity/falcons/index.html who are sitting on four eggs this year. When the chicks are on the move and peer in the office window I'll take a snap and send it to you! Also, 'bonus' bonkers-ness if you check out falcon posts on the Nottinghamshire Wildlife trust page on Facebook in which you'll find unbelievabley batshit comments appearing from the pigeon fanciers - seriously, if you meet one BACK AWAY!

I, too, find myself in an odd period of contentment and, possibly, happiness. I have no real excuses for this state, and expect bitterness to return shortly. Until, then, however, I can abide with the strangely floaty sense of happiness.

Just in case you are feeling slothful: http://www.bbc.co.uk/news/magazine-26734289
Not a webcam but a very lovely story

I blame spring for the general feeling of pink fuzziness. Dire air quality over the last few days here in London apart, really what's not to like about mild weather and bonkers proliferation of greenery and flowers? And what kind of attitude is that for the cynical urbanite? :-)

Stay mellow Waffle, you deserve it!

A BBC article about sloths that you might appreciate: http://www.bbc.com/news/magazine-26734289

This was my most recent oppressive, helicopter-y missive (it's from a predominantly Jesus-y place!).

I love that photo. The hound looks so contented. The tortoises are inscrutable.

Up:
- making ridiculous photographic comic strip for two friends who asked to "see photos" from House of Commons reception I attended on Monday, and finding it highly amusing (if I say so myself)
- discovering sunglasses I thought were lost were not, in fact, lost at all.. unless you count 'camouflaged at bottom of rucksack' as being lost
- staying on top of damn laundry pile by using neighbour's washing machine in their absence (I have keys *cackles*)

Down:
- taking best part of two days to make aforementioned comic strip thanks to technology failure (with no 'help' button) and lack of patience (me)
- putting off packing for ski trip because of lost sunglasses (yes, I know, not actually a vital item for this type of trip, but hey, needs must and all that)
- washing machine going on the blink just as you decide to plow through monster laundry pile "so everything is done when you get back from holiday"

Tip: never tell an electronics engineer that the washing machine is broken - perfect excuse for them to take it to pieces. I now have a garage that looks like a mechanic's workshop.

Me too waiting for the Wife - is this the END?!!

eagle owl http://webcam.pixtura.de/SWR_UHU/
Soon there will be owl chicks, yay!

Ha ha so all mostly good then.

I am
95% stressing about daughter's revision regime which involves SILENCE and mini eggs
5% mini eggs that I think I've got away with eating whilst she wasn't watching.
Rest of list here:-
http://www.familyaffairsandothermatters.com/exam-revision/

Ooooo I was going to suggest the hawks, but you've been well supplied with links! Although that really depends on how much you want to watch the mother tearing a pigeon apart and feeding the bloody flesh to its offspring... I personally detest pigeons so am perfectly fine with this...

you might recognize that Tubidy can index videos from net tubidy-mobi.org we have known the basic information of tubidy.mobi.

Thanks For Sharing Information ;)

Thank you very much for the information, very useful and a good read Ciri Ciri Maag

This information is very useful. thank you for sharing. and I will also share information about health through the website

Thank you very much for the information, very useful and nice to read CT Scan, Ini Yang Harus Anda Ketahui

I can only express a word of thanks, nothing else. Because with the content on this blog I can add knowledge Thank you very much has been sharing this information. Do not forget to visit our website to share information and knowledge about health.
cara memesan QnC Jelly Gamat
cara mengatasi radang panggul
khasiat vitamin anak
agen QnC Jelly Gamat banjarmasin
cara menghilangkan Stretch Mark
cara mengatasi kebas dan kesemutan