A morning with Prog Rock

I am running slightly late, of course, when I get a text.

"I am in the Great Court Café. You nearly here?"

"Well, you go up the main steps and into that glass covered bit..." he explains very carefully.

We reconvene on the corner of Tavistock Square: I see his rangy form coming towards me, sly cigarette, rucksack, big smile. We hug, and head to a café where he hands over 4 packets of Hula Hoops left over from Christmas and a giant box of Yorkshire Gold teabags.

We sit in the sun and talk about:

Hot cross buns (I have been dreaming of hot cross buns through this long, barren detox of hell)
Sourdough
French teenagers
Sick pets
Dead pets
The death penalty
My sister
Boiled eggs and soldiers
Lenin's blue plaque
What chickens eat
The social composition and political leanings of Montreuil
Our prospects of success at the ludicrously bureaucratic financial operation we have come to attempt: still, ten years later, fall out from my mother's death. At one point, in this context, he brings out his favourite Heinrich Böll phrase: es wird etwas geschehen ('something will happen', I think?). "But the etwas may not be the etwas we were hoping for."

We head to the bank. As we are about to go in, he makes me stop outside and look at the trees in Tavistock Square, which are indeed very pretty, and in full bloom. As he finishes his cigarette, he tells me about a stype of chestnut tree you apparently only find in London.

We go into the branch, where Prog Rock has recently made a very specific appointment with a specific man to do a specific operation. At the information desk, they tell us man with whom we have an appointment no longer works there. Prog Rock starts cackling. They eventually find someone else to see us.

In the stuffy customer booth, he gets unreasonably giggly at this sign: 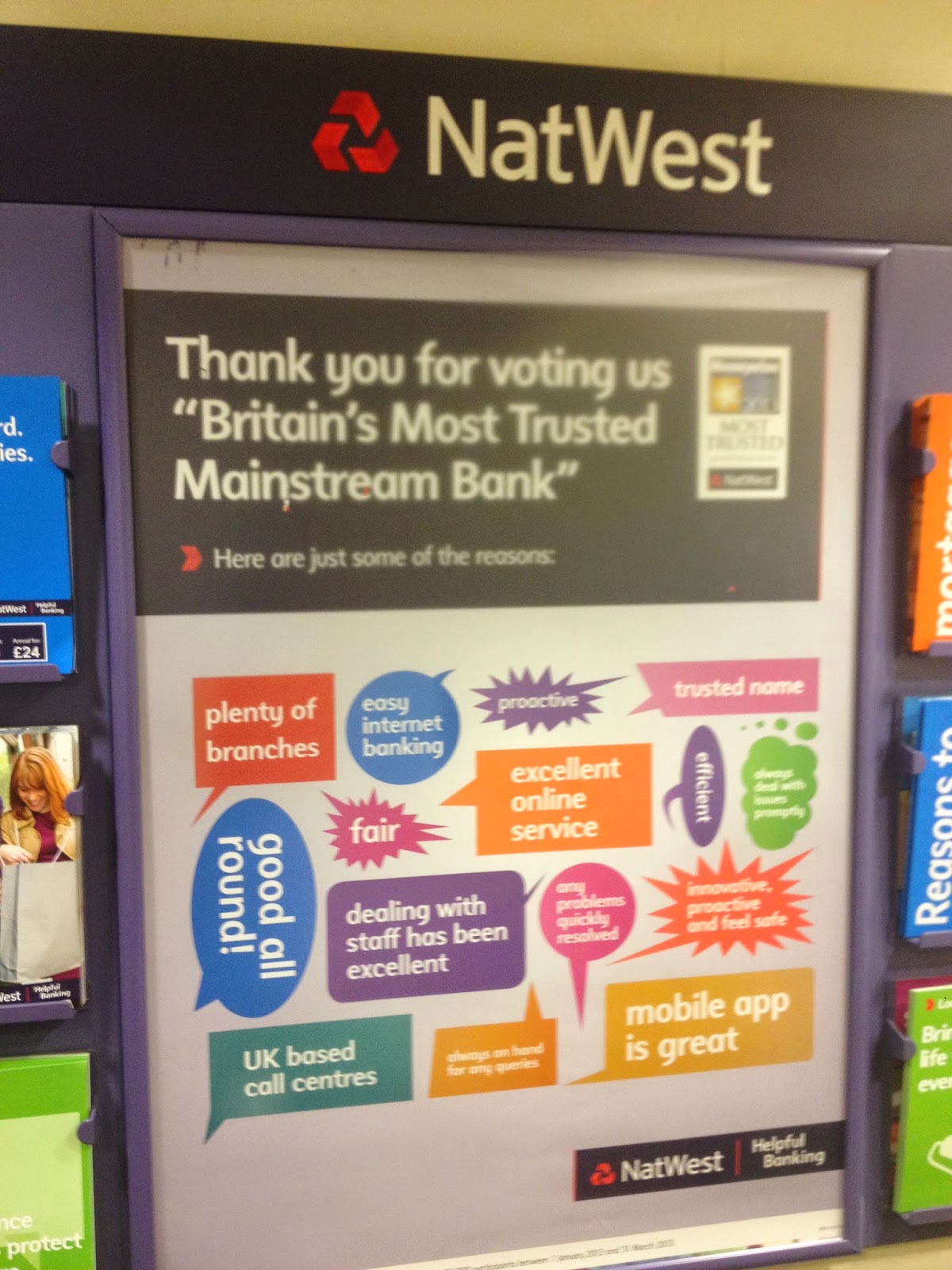 "That's like one of those jokes, 'the Italian book of war heroes' or something."

Then he launches into a monologue about how poorly British banking reacted to the sub-prime crisis.

The woman isn't sure about one of Prog Rock's folder of papers. She disappears for a very, very long time. During her absence he tells me about:
Maria Miller
The shift in portrayal of civil service - politician relationships between Yes, Minister and The Thick of It.
Dutch pronunciation.
Money: the unauthorised biography and the story of the giant rock currency on the Pacific island of Yap. Apparently, on this  island which used giant, impossible to move rocks as currency, one of the rocks was sunk in transit from the island where it originated to the island that used it as currency. But it was still owned, transferred, in 'circulation'.
The Irish banking strike.
Our chances of success, again. "Still better than 50:50" he opines, optimistically.

He's wrong. The woman returns. The piece of paper is ok, but it turns out she needs to get us to fill in a form and she doesn't have the form, and cannot obtain it, other than by post from Head Office (can we all take a moment to contemplate that someone could utter such a sentence, in 2014). Even though we have come here specifically to sign this form. We have failed in our mission. We must return at great expense in a few weeks. The etwas was very much not the etwas we were after.

Predictably, Prog Rock finds this both unsurprising and funny."I've done a lot of this trustee business" he reassures the Natwest lady as he puts his folder of papers back in his rucksack and we prepare to leave. "And you are far from the worst."On the way out, he stops to admire the ceiling rose in the entrance to Tavistock House. Then we part, laughing at our failure, and he heads off to the bookshop to find a grammar primer for my sister.

I should be annoyed, we both should, but Prog Rock - eternally curious, eternally amused, eternally gentle - has rubbed off on me, just a little. The sun is shining. I still have a few hours do find a nice etwas to do.

Glad it's not just me who's done the British Library/British Museum mix-up.

Hot cross nuns? Now that's something I'd pay to see...

Autumn - Ha! I kept typing that, seeing it and deleting but THE NUNS KEEP COMING BACK.

This post made me smile today, so beautifully observed on a day when my 'etwas' is hateful and turgid

What an absolutely lovely man he must be and what a wonderful, wonderful way with words you have.

I hope you manage to sort out the etwas sooner rather than later.

Today I'm all anxiety, having called the reluctant accountant, who now says that a refund is only debatable and not a given. I do not feel up to a 'debate', row or lawsuit but I don't want to let him get away with it either. I'm feeling a very strong urge to hide out under the table until next week/month/ year. It doesn't help that other anxieties, worries and heartaches are also vying for attention despite the fact that my mind is already full and with no room for more. Funny how that happens, like a snowball of anxiety gathering momentum.

Anyway, sorry for getting that off my chest. I should probably get out more, etc.

I have long wished I could borrow Prog Rock, but today it has occured to me to wish I could BE Prog Rock (modulo being a 38-year-old American woman). Of course this is an aspiration well beyond my reach, but it sounds most desirable.

Let me clarify that I am about as likely to become a wonderful Prog Rock as I am to sprout wings and fly, but it's a lovely fantasy.

Prog Rock! Everybody needs someone like him! What a treasure!

I feel your pain: We have an ongoing 'wading through treacle' experience involving the transfer of a trust fund from my deceased father's name to our eldest son WHO is by now well and truly of age. The brokers need proof of identity (reasonable enough) and proof of permanent address such as a rates or electrickery bill. Problem is, all these Things are now done on line, no paper bills any more. Then need to get a Picture of his passport notarised, but because that would be in Danish, we have to have it translated and the translation notarised as well...or something.

Goodness me, I thought dealing with Virgin Media was difficult - I now see I am but an amateur in such things.

Beautifully written and evocative, as ever.

Oh Anon, I do feel for your terrible accountant story, and think of it often. Those BASTARDS. I am very sorry.