I got a fuzzy picture by email today of the children on their first ever black slope. They are quite difficult to spot and, I would hazard, stuck in a snowdrift, but what do I know? Nothing. I hate skiing, it's all imminent peril and synthetic fibres and their attendant static electric shocks and the kind of people who would crush me underfoot in any kind of stampede wooshing up behind me at high speed as I flail around in a crabbed snowplough. There is a reason I have not gone with them. 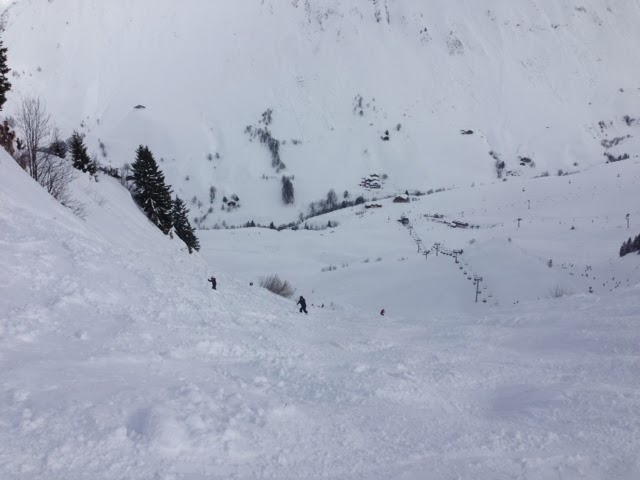 (I know skiing is unspeakably bourgeois if you are English, but they are basically French (or possibly Belgian) and I tell myself the rules don't apply. Anyway, L has to go on a two week ski trip with the gulag in a fortnight and it is a bog standard state school and all pupils in the last year of primary state education in Belgium seem to do this, so I am sticking by my guns, no need to put them up against the wall come the revolution. Weasel justification over).

It was accompanied by a short message. L's part read "I only fell over three times on THE BLACK which is called 'Le Couloir de la Sonnerie' which sounds like an alarm clock, dring! there goes the couloir de la sonnerie, not a very impressive name".  F's read "I only fell over once on the BLACK. Apart from that everything is ok I've just got out of the pool we love you."

(except it was all in French, because they are French and thus skiing is ok, remember)

So that was nice, and possibly the nicest thing all day, which M and I jointly considered to be one of our whiniest days in the long and august history of our joint whining (I wondered, briefly, if I should give up whining for Lent, but I know it is physically impossible and I am not a Catholic, or indeed, an anything). Also on the positive side of the ledger, it is mild and sporadically sunny and I have made spinach béchamel pasta gratin which is my other most favourite food no one else likes (my giant vat of dal was a slightly over-salted, but otherwise roaring, success). On top of that, Prog Rock is sending me emergency teabags, so honestly, what am I complaining about? Nothing. Shut up, me.

I, too, hate skiing. I was born and raised in Iowa, so naturally, steep pitches inspire vertigo. Pancake-flat terrain is in my blood. However, in a short, ill-fated relationship with a skiing-obsessed French boyfriend, I had the option of skiing lessons or never seeing him in the winter. Eventually, I realized I had made the wrong choice, but hey, I can at least say I tried to learn. I haven't been down a mountain on skis since and can't say I've missed it a bit.

1% amazement at how black night is reading ipad in dark.
2% dinner speculation from youngest " 1st word D 2nd word onimos "
25% not being fired for gross negligence by man
25% inviting her to dinner
10% finding available evening in the next fortnight for same

What a trouper you are! ONLY 2% Tom Lehrer ear worms!

How do you know about Tom Lehrer? You are so much younger than I am:)

Don't mess around with the grand jury, sister. They say a good prosecutor can get a grand jury to indict a ham sandwich.

My day:
95% Oh God why is it still so fucking cold 10 degrees is not enough degrees
5% Are you absolutely sure it's only Tuesday?

Margaret - I KNEW IT. I knew I was right to be scared.

Kathleen - It's all Prog Rock's fault.

Aw the children's messages are lovely! I'm giving up everything sweet for Lent, except for the next three days when my best friend is visiting, and my mum's birthday, and any other occasion which warrants cake. I'm sure the baby Jesus is very proud of me. Love the percentages!

I will send oldest b-boy immediately as dinner companion. He *loves* spinach pasta more than life itself. We all sit and look on in horror as he wolfs down bowls full of bright green sludge. I blame Annabel Karmel.

My only skiing experience was on Cairngorm in early January. Hardcore. Let's just say that Aviemore doesn't quite match Closters for apres-ski glamour.

I am a DISASTER on downhill skis. I do like cross country skiing---not that I've had the opportunity to ski in years.

60% tiredness
10% general despondency
10% constant procrastination
10% perpetual hum of anxiety
10% too many carbs, in need of Prozac trousers
100% fan of your blog! :)

100% Nothing that Suede Western Ankle Boots with Inconsolia (registered trademark) could not cure.

percentages:
10% self flagellation
32% Breaking Bad series end bereavement
18% In love with Aaron Paul
40% Forgot to make pancakes on Tuesday so better get on with it hadn't I?

What can I say? I read during lunch.

1% wondering if my small one's ear pulling is ear infection early warning. Quite sure I won't find out until doctor's offices are all closed for the weekend.