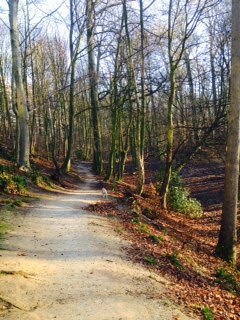 Uccle is so quiet this weekend, it feels like someone has coshed it over the head. Empty streets, no cars, barely a scrawny cross-eyed cat sitting behind a net curtain and staring out (these normally make up 63% of the Uccle population. 63% cross-eyed scrawny cats in windows, 14% boring middle class families, 10% despondent pensioners in those green loden coats with aggressive dachshunds/teckels, 1% menacing youth and 12% lunatics) ). Well, all is quiet except my next-door neighbour (very much in the 12%) who is having a Johnny Cash marathon, but let us not allow this blog to become a bitter diatribe against him. Much. I'm trying to limit myself to one rant a week. Suffice to say, I'm writing this wearing earplugs and have also ordered a mixed tester pack of other earplugs, which as online purchases go, is unlikely to win any awards for aspirational glamour.

Mainly, on this sleepy, solitary weekend I have been thinking how healthy I would be if lived on my own. Things I do when on my own: take the dog on long, fast walks. Wander round town for hours on end until my feet get sore, even in M and S comfy old lady boots. Cook vats of dal. Eat 27 types of green vegetable. Ok, maybe the odd eclair, but it would mainly be a life of near-Gwyneth levels of worthiness. Of course, it would also be tragically boring. I would be stultifyingly virtuous, joylessly self-absorbed and permanently anxious. This would kill me long before all the rillettes and crisps and wine will. In the meantime, it's pleasant for a couple of days: I mean, I thought I would love a bit of monastic me time, but I find I've already more or less reached my limit. Everything is frighteningly tidy and all the washing up is done, I am not scrabbling to finish my work and I have already taken the bins out. Dull.

Here, look, this is not dull: 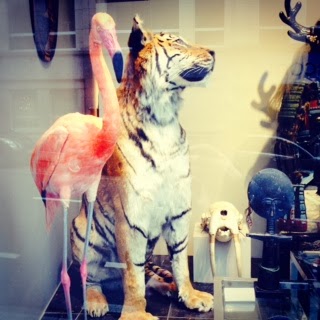 This Sablon shop has recently changed their window; until recently it featured half a giraffe (front half) and a rather amazing snake skeleton under a glass dome. This is another audacious combo. Where do you go from here? Full T-Rex? How about a giant boa constrictor in the act of swallowing a half springbok?

This is all I have for you. My brain feels like someone has wrapped it up in damp, mothball scented cotton wool. My imagination is in a Swiss sanatorium in extended convalescence. All my words have vanished and I have all the verve of a panda recently imported to chilly Belgium in a DHL lorry. Let's see what tomorrow brings.

How was your weekend?
Posted by Waffle at 22:26

My weekend was ruined by a major disappointment: the oehoes are NOT back on webcam! They have moved to a different nest. So no livestream of owl chicks this spring :-(
I'm close to tears about this.

relax, waffle...you're still miles ahead of the rest of us!!

If I lived alone, I know I would lose weight. It's tempting to just sneak away and get my own apartment. My kids could visit any time they wanted, but they would have to keep their food away from me.

Weekend was highly productive, and we've been promised at least a foot of snow tomorrow, so I probably will not have to go to work. (Although "working from home" can be excruciating.)

The window people could reproduce the epic snake vs crocodile battle from Queensland over the weekend: http://www.brisbanetimes.com.au/queensland/snake-eats-crocodile-after-epic-fight-in-queensland-20140303-33xz8.html (the snake won, and ate the croc).

Karen HOLY SHIT THAT IS AMAZING.

This sentence is pure gold: "Suffice to say, I'm writing this wearing earplugs and have also ordered a mixed tester pack of other earplugs, which as online purchases go, is unlikely to win any awards for aspirational glamour."

I went to Oxford, to liven up my life by experiencing a different kind of lovely-sun-is-it-spring-no-here's-more-rain climate. And I got offered a job which means leaving Brussels in a FORTNIGHT's time! Having spent the last six months moaning about it, I now want to stay, and am quite upset.

Yesterday was very foggy and since guests left early in the morning I pretty much stayed on the sofa. Glorious.

Vinay Dixit: While hermes outlet the importance of key cities in tier-1 in China cannot be underestimated, fendi outlet significant growth will actually come from lower tier markets. In fact, we believe that almost 75% of new wealthy hermes replica households will be created in areas outside the tier-1 cities in China.

Purchasing a Hublot Huge Return Duplicate look at is agnate to issues fake duplicates of Compact disks or Videos or installing popular music from actionable web pages. Yet another reality is that the importance companies are usually not expressed to accommodate to every one Rolex Replica. They accept a aperture bazaar and tend to accumulate it like this.Perhaps the many light and many less continual usually be seated waters (EDT) Breitling Replica. Principal cutaneous grease which includes several 8% similar content, but it all function, every A pair of ~ 3 hours. But it is very suited to summer, company and other conditions, including a fantastic perfume merely don't best Rolex Replica Watches.Unknown capital place can be looki Replica Cartier Watches.

Check out the list of 11 common mental health disorder in children that a parent should know and find the Best Neurologist in Delhi.

Great post, you have pointed out some excellent points, I as well believe this is a very superb website. Pictame and the other pages describe themselves as 'Online Instagram Posts viewer', which operates through the Instagram API.