Up then Down: after an inauspicious start (leaking boiler), I bestrode this morning like a moth-eaten colossus. I went to the bank and the dry cleaners, posted letters and sorted out my invoices, called the plumber, made appointments and checked my bank balance to discover TWO of my large outstanding invoices had been paid. But then in the afternoon I got another comically massive bill that is, without a shred of exaggeration, double the two of them put together. I say comical, I'm just pretending it's a joke. It's for the best. I just .. can't. Nonono. Fully ostriching.

Up: the sun was actually warm today. Weepette and I stood out in the back yard, both of us pressed against the wall, eyes closed, for twenty minutes and it was properly lovely.

Down: my lunch, however, was truly revolting. A new culinary nadir, made from leftover salmon rejected by all of us as too disgusting to eat last night, fried up with some other unpleasant oddments from the fridge. I have no explanation of this, other than 'idiot' and 'half hearted Dr Perricone' ("is there a facelift in your fridge?', asks the worryingly reptilian Dr P to which I must reply 'no, Doctor Lizard, but there are 500 heads of chicory and half a flabby salmon fillet in an ill-advised marinade I still have to choke down, so this 3 day facelift better start happening soon'. The chicory isn't Dr P's fault, we went to a rural market to examine chickens for F's imminent birthday - don't ask - and our heads were turned by bargain chicory).

(Parenthetical down: L has just come down - it's half eleven - to tell me he can't sleep because he has 'Poisoning Pigeons in the Park' going round and round in his brain. New rule = no Tom Lehrer before bed).

Up: there's a frankincense themed giveaway going on over on Full Fat Facegoop (which M has redesigned most elegantly).

Down: a new low in Belgian philately, and god knows, things weren't exactly great before now. Truly awful. Perfect for your accountant, small claims litigation, letters of complaint to utility companies, all correspondence requiring a certain degree of gravitas: 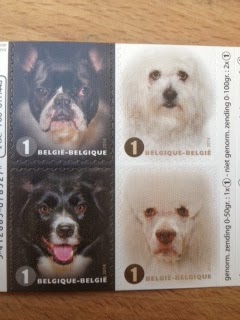 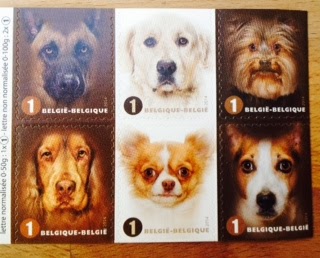 NO REALLY, DOGS. YOU ARE CASTING A PALL.

The dogs remind me of the cubes of destiny you get on OK Cupid, where they send you a montage of photographs of hopefuls with the tantalising message 'one of these people chose you!' (it is invariably the one who makes you involuntarily recoil from your screen in alarm/revulsion). If these dogs were my OK Cupid montage ... well. I don't even know who I'd be hoping for. But I would DEFINITELY get top left on the bottom set, and the poodle on the top.

Who would be your canine OK Cupid death match?

Bottom row centre, 2nd image, without a shadow of a doubt.

Those dogs look like they were just arrested in Florida for some heinous crime. Yikes.

Top left hand corner.
He's really sorry he's going to have to bite your face off, but you brought it on yourself.

Good grief, what sad canines. Stacy, they do look like mug shots. I WILL ADOPT THEM ALL.

Your morning sounds so productive. You will clean all the things.

I wish I could help with the earworm. I regularly get the Mr. Rogers Neighborhood theme stuck in my brain. (I haven't watched it in 40+ years.) I've heard rumors that Gloria Gaynor's "I Will Survive" can cure it.

Oh the sun on Sunday was lovely and bright! I was not aware of the sun yesterday because I was too busy wallowing in a pit of despair. Fingers crossed for today. Whoop productivity!

I always get the small alarming ones.

You cheer me up and make me laugh.

Flabby salmon in ill advised marinade made me snort out my morning tea :)

Those first-sniff-of-spring days are so marvellous and full of hope though. Mmmmmm.

Bottom right - psycho eyes dog.
For no reason I have From Paris to Berlin http://www.youtube.com/watch?v=THt5u-i2d9k as today's earworm, inappropriate for today's chore of going to a junior school (incomprehensible) assembly. I will admit the assembly might have been less incomprehensible if my brain hadn't been singing heavily accented Europop.

NO DOGS, NO EARWORMS. THEY'RE ALL YOURS, MS. WAFFLE. I'M STILL RECOVERING FROM THE FLOOD OF CATS ON TWITTER JUST BEFORE THE SUPER BOWL.

good pun re Tom Lehrer in your title.
"life is skittles and life is beer..."

Number 5 looks my type; dark brooding and unlikely to be a keeper .
Copenhagen was indeed marvellous in a spectacularly bleak and Weltschmerzy way. Came home to a double bill of The Bridge which made me weep. My own earworm is now The Danish language in its entirety. Endlessly going round into addled brain:none of which I am able to translate into anything practical.
We are to get Salamander in the bbc4 slot soon.
Hark! A Belgian Thriller.

I was really hoping that the "Diets" section would have a variety of similarly... focused options. I have plenty of ideas. The Four Day Diet: whitefish and bananas! The Five Day Diet: blueberries and eel! The Two Day Diet: bacon and dried apricots! The One Day Diet: avocado and gooseberries! I think we could make a lot of money from this. Who's in?

Or we could theme it a different way. The four day diet: beef and wine! The three day diet: lox and jam! The two day diet: bo and wq!

redfox - It's totally insane and pointless. I am toying with a Facegoop post on it, but I think we'd be better off going with your whitefish and bananas. LET'S DO THIS THING. I'll work on the pseudo-science, you whip up some $200 "supplements".