Eyes on the microwave

Nothing amusing has happened in the last couple of days. This is not a complaint, everything is fine, just not very blog-worthy. You can rest your eyes on this list of humdrum non-events in a dull moment, I suppose.

The surviving rat just peed up my (best cashmere jumper) sleeve. It hasn't done this to anyone else. Fucker. Who does it think keeps it in hypo-allergenic bedding and its favourite thyme scented hamster food?

Plumber has vanished after promising that he had "measured the pipe" and would be returning "urgently". Water continues to accumulate in places it should not be.

A man on the Armani counter gave me an unsolicited pity makeover this afternoon, because I was looking at his lipsticks while dishevelled and make up free, and I think because he felt I was bringing the reptilian House of Armani into disrepute. Admittedly I do look pretty awful.

I don't think I can listen to "The Happy Farmer" (Fröliche Landmann, beginner's violin torture, vol 84) again without breaking down irretrievably.

There are two squidgy rubber eyes in a plastic bag on top of the microwave and I think they have been there for a year. 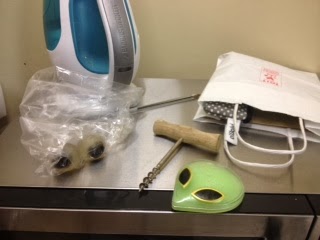 The alien putty too, but I find the eyes much more disturbing. It's the texture. This evening I tried shouting that if they were still there tomorrow I would throw them in the bin and now they have gone, but doubtless I will find them somewhere far worse tomorrow.

FOURTH day of sun. I feel like a new woman (even without a thick layer of unsolicited Armani goop). The wasteland that is the back yard is sprouting (mainly weeds). Birds (mainly pigeons) are singing. I am no longer so enraged at my neighbour that I fantasise about punching his teeth in whilst grinding my own away to stumps. Much. Except during the Jamiroquai sequences.

Made a new friend in the park. She's called Angelika, she's Romanian and she used to be a member of the Committee of the Regions. We had a chat about chickens, children who won't tell you what they want, Brussels, the city all your friends leave, and Romanian winds. She is several decades older than me, obviously, I basically live the life of a pensioner. Hopefully she won't turn out to be a massive racist like my previous dog walking acquaintance. So awkward.

Stroked two nice dogs on public transport: a comical bulldog puppy with gigantic paws (rather smelly) and an effusive Staffie called Ziggy, who made noises like a pig. Ziggy's owner said she was actually "a really fat whippet".  He looked traveller-esque and spoke heavily Cockney accented English, but not to native level, quite a puzzle on the Brussels metro. Most things on the Brussels metro are a puzzle though (music, civil war reminiscent levels of disrepair, futile barriers, etc etc).

We tested eye creams on Facegoop and mine were bloody disastrous, so that's one less thing to spend my money on. Results here. There's nothing like a vast, awful, exhausted picture of yourself with no concealer or foundation around your eyes to raise morale. I really need that 3 day cantaloupe and salmon facelift, shame it's absolute bollocks, eh.

My cephalopod correspondent has alerted me to this both touching and profoundly unsettling piece of capybara behaviour*. DR CAPYBARA? IS THAT YOU? BLINK IF YOU NEED HELP.


Do fill me in on anything more interesting you have been doing, which has to be one of the lowest bars imaginable.

*NB: For the avoidance of doubt, the capybara, despite its classification by the Catholic church as a 'fish' is not a cephalopod.
Posted by Waffle at 22:24

I have seen a massive amount of terracotta warriors and an even more massive amount of Chinese tourists happily screeching and shoving. I've been stared at (white woman), shouted at ("halloooo!!!") while biking the city wall of Xi'an. I've eaten far to many pickled garlic cloves and sampled just about any street food available in the city's Muslim Quarter.

Now back in the south. Smallish translation job due tomorrow, rather heavy angst about that. A very slow and irritating cold BUT! BUT! Yesterday afternoon husband and I took off (rather desperately) for a walk and ended up in the old can factory district, now arty farty spot, where everything all of a sudden turned into the perfect Scandinavian summer evening: a nice beer outside, warming sun, a slight breeze that makes you grateful you brought a shawl, a stroll past a makeshift vegetable garden next to a rubble heap/parking lot and restaurants setting up for the evening.

Just read Guardian Facegoop and wait a minute, you have a BOYFRIEND!?

I recall another oblique reference a few weeks back.

I'm glad Anonymous got there first and I am not the only person who demands to know all the juicy details on a BOYFRIEND.

It's good to know I don't need to bother with eye cream.

I signed our unruly puppy up for a training class and I had to fill out a bewildering three-page questionnaire about her behavior: "Do you think of your dog as a child?" "Does your dog nudge you to be petted?" "Has your dog ever been mad at you?" "Does your dog act out of spite?"

I really didn't know how to answer these questions in such a way that won't cause the dog training people to be prejudiced against me. SHOULD I consider my dog to be my child? What does it MEAN if she doesn't nudge me for petting? That she's well-behaved, or that she's a human-hating psychopath? I just want her to stop trying to dig up the floorboards with her teeth.

Wow! Links that open in a new window. Congrats on technical wizardry, Waffle. (from your html helpdesk!)

Anything interesting? Hmmm, dealt with massive flatus of stupidity at work, lots of drama and rallying 'round the flag and whatnot. Finally got it more or less resolved only to realize that this means I am back where I started on Monday, only tireder and less fond of humanity, as if that were even possible. However, aspects of it could have been described as interesting, by a sadist.

I house sat a Staffie last week, and I wish I'd known to respond to all the people who ask, "Is that a pitbull?"
"No, it's a fat whippet."

Thank you for passing that along!

A troubling day. The odd, creepy Pret man touched my arm and said "I like your hair". Last week he asked me what road and which building (!) I worked in, which unnerved me so much that I told him. I fear that Creepy will be sending me V-day flowers. Am now torn between the smugness of carrying home V-day flowers on the tube (yay!) vs never being able to visit the only Pret close to my work again (boo!).

This should trigger a cheaper lifestyle involving packed lunches "so easy, just bring in leftovers" but unlikely when typical dinner consists of: slice of Konditor & Cook lemon chiffon cake + dry bran flakes eaten from hand like a pony.

I've been chasing around a two year old and have just found out I'm pregnant, at 35, after flaking out on my appointment for birth control. That's interesting, yes?

I went to the "jouets qui font pouet" exhibition. It was v crap but made me think of you - I hope that doesn't sould horrible - really, it would take a talent like yours to describe my feelings about it - the ugliness trying to be cute, the sadness of old toys, the ridiculousness of putting 100 crap plastic things in a room and calling it an exhibition...
Anyway, it was instructive: we learned there that my son is scared of pouet-sounding toys.

Creepy Prêt anon - Oh dear, this really made me laugh which is heartless, because brrrrrrrrrrr.

Anon - oh god, only just seen this. Many many good thoughts. I hope you are ok.


Marion - THAT SOUNDS HORRIBLE (I am not at all surprised).

Excellent goods from you, gentlemale. I’ve perceive your stuff past to and you’re simply extremely wonderful.