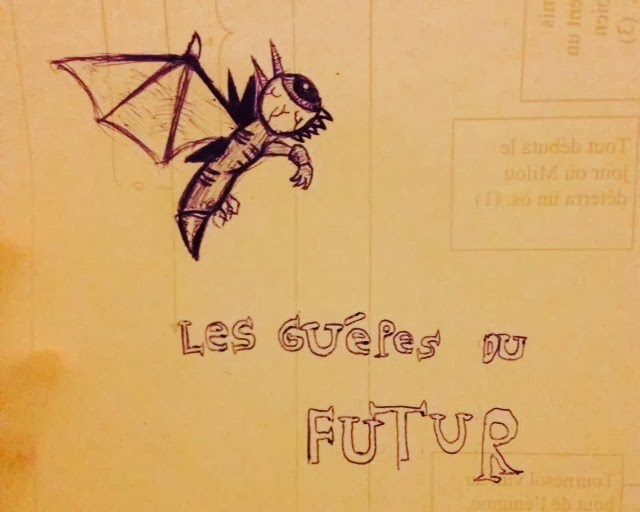 (I have no relevant pictures for this post, so this is a "Wasp of the Future", courtesy of L today. It was that or him with a rat on a lead, and I thought on balance this was probably less disturbing)

1. My printer
Obviously, by writing this, I have now ensured that it will chew up a ream of paper, catch fire and burn the house down within the next week. But! It is a truth universally acknowledged that everyone hates their printer, for they are Satan's office supplies, capricious, ink gobbling sadists, infinitely sensitive to time critical tasks. My printer, however, is a brick (in the Angela Brazil, rather than the masonry, sense). Purchased (cheaply) in 2010, it has been the most reliable workhorse imaginable ever since. Apart from its slightly snobbish disdain for generic cartridges, its behaviour is irreproachable. Thank you, printer. (it's an HP Photosmart, if you're tempted to enter into a psychically damaging, co-dependent relationship with a black box). I anticipate your imminent demise with a heavy heart.

2. The tumble dryer
It's really bad to have a tumble dryer isn't it? Well, I assume it is. Anyway. Say farewell to the scent of mildew on your crunchy, hard towels, and say hello to the most satisfying household task in existence, the emptying of the lint filter on a tumble dryer. No sensual pleasure comes close to lovingly removing the lint from the filter in satisfying sheets (what? I am a dried up husk of a woman and I get my kicks where I can, including from lint). My tumble dryer has tumbled a mountain of clothes to toasty warmth in the past year and I have the Electrabel top-up bill to prove it. I am unrepentant. Well, I am sorry for the polar bears, who, based on the numerous documentaries I have watched about them in recent years, appear to lead a brutish, short and relentlessly grim existence made worse by disappearing ice. Who'd be a polar bear? Not me. If I were a polar bear, a 'lone male' would have eaten me shortly after birth, I imagine. (This reminds me we must discuss that ludicrous "animal shaped spybots spy on dolphins with hilarious consequences" programme)

3. Oromovicza Illuminating Moisturiser
I got this for free, and I cannot afford to replace it. If, however, your skin is dryish and sensitive and you are in the fortunate position of not being €500 overdrawn and willing to pay top dollar for snake oil, I recommend this nonsensically named Hungarian potion with all my heart. Contains "ruby crystal", whatever that might be (perhaps rubies, given the price). Costs one hundred and twenty of your finest euros. Has the distinction of being the only moisturiser good enough that I can actually be arsed to use it every day, despite me supposedly being a beauty blogger. Over the past two weeks in my ancestral lands I was buffeted by wind, rain, booze and cheap chocolate. I did not use cleanser once, the only liquids I consumed were tea, gin and wine and on one occasion I resorted to lip balm to remove my eye make up. Nevertheless my skin is clear and plump as a seal and the ONLY thing I used on it was this stuff.

4. Kindle
Damn, I love my Kindle, that battered, ugly little rectangle of wonder. Did you see the 99p sale yesterday? I bought TEN BOOKS, despite the €500 overdrawn thing, including The Luminaries, newish Ian Rankin, Zadie Smith Cambodia thingy, Julian Barnes memoir, Penelope Lively memoir, etc etc etc. Ten books for ten pounds! For amazing literature! No wonder Papa Waffle was so insistently trying to convince me that my dream career is a mug's game over Christmas (his suggestions: (i) I take up corporate tweeting "like your cousin Neil"; or (ii) I pitch features about him to Saga magazine, famously one of the only publications that still pays £1 a word, but I digress).

5. Yorkshire Gold teabags
I had a sad few months last year where, having bought a gigantic box of normal Yorkshire teabags, I was forced to use them all up. I will NEVER make that mistake again. Your morning tea should be a joy, not a sour, dusty disappointment. I will never stray from the Golden path of righteousness again.

6. Having a shit ugly wallet
2013 was the first year in living memory during which I did not lose a wallet. Since having the previous one nicked in December 2012 (hai, still unreplaced cards and vital documents), I have been using an ugly, biro stained, pale green coin purse with all my cards, money and important documents scrumpled up in it. This monstrosity has, predictably, proved completely unlosable. Unfortunately, I have just been given a beautiful, green fluo Comme des Garçons wallet for Christmas (to replace a cherished, less fluo but still green CdG wallet I lost circa 2007), so I am doomed. I still have ugly pale green purse though, so at least I know what to fall back on.

7. Cheese. On toast
I am not a massive cheese person, but since this shop opened, practically at the end of our street, I have been somewhat converted. I still only like approximately 3 kinds of cheese, but now I have a smart and aspirational shop in which to look suspiciously at the rotten milk products, and the three kinds I eat are in consequence superlatively delicious. Also the owner, who is a terrifyingly intense cheese maniac with a thousand yard stare (presumably dreaming of Tomme d'Ambert or something), wears a giant beret at the weekends, which is a great comedy bonus. Cheese on toast has continued to delight me on approximately 4 lunchtimes out of 7 a week this year. "Cheese never lets you down" says M, somewhat wistfully as she is about to embark on a 12 day detox for Facegoop, and she is right.

Return soon for the follow up on the things that DID let me down in 2013.

Beautiful piece of writing, especially the first paragraphs about the printer and the tumble-dryer. Exquisite.

My mobile phone, in memoriam: I got it from my husband in 2006 or something. You flipped it open, it had a pedometre, it kept working even after you dropped it on the stone floor, and the ring-tone was a cuckoo-clock.

It was the cuckoo-clock that made me most reluctant to exchange my stupid, old, beloved phone for a smartphone, but in the end I did. Forgive me.

Satan's office supply. So true! When I am on call, part of my job is trouble shooting people's printing issues. I usually tell them it's a "server" issue, which is sometimes actually true, although I don't even know what a server is.

Ordinary Yorkshire is my tea of choice. Is the Yorkshire Gold appreciably better?

My clothes dryer has been letting me down. It works, but, mysteriously needs to rest for at least half an hour between loads and it won't turn on at all if we put anything heavier than a dish towel into it. My hair dryer is the only appliance I can think of that hasn't let me down in 2013.

Tilia - I hate my phone. It is a dick. Though not as bad as the other culprits on my forthcoming LIST OF SHAME.

Patience - Oh man, please give it a try for me and see what you think? Possibly it's 39 years of indoctrination, but I found Red Yorkshire vastly inferior.

Hmm, that's a tough one.

Being stiff and given to drink? Of course their staying power is probably due to the fact that they go hand in hand, like your palm and your forehead. Willa Cather certainly nailed that one.

The fact that absolutely everything could be WAY worse, has been hanging in there like a champ, and I so appreciate it.

Oh wait, the inertia of crap!

I am extremely benieuwd as to what the wasps of the future will bring (and I mean this more literally than you could possibly imagine).

The sleep deprivation as a new mum continued - the red lippy held me in good stead (a berry lip conceals all signs of ageing and sleeplessness) and I discovered Hendrick's...shan't say more in a public forum. xx

Loved this post:-) I wasn't let down by a) Marks & Spencer b) my local cheese stall c) Babyliss - their hair contraptions are the best d) some members of my family and overseas friends, who sent me lovely edible gifts and indulged my obsession with owls over Christmas.

My grandkids...they never fail to amaze, astound and delight even when they are being little arselets. And my dark teal leather handbag, which is designed better than any I have ever owned, so I can actually get my phone out of it before it stops ringing, plus it seems to go with everything I own (which is all black, so not surprising.)

Frau Antje, you should also have been on the list. Your comments have unfailing me delighted me for the whole year and WAY BEYOND.

I have been completely and recurrently satisfied by the services of the cockraoch exterminator. How nice to open cupboards and not see movement out of the corner of one's eye.

Also: my small thermos has kept tea warm through many dull (or, worse, eventful) hours at work.

The Other List (things that DID let one down) is too depressing. Perhaps "Things that Fell Down in 2013" would be better fun?

I am delighted by Future Wasp. Will there be a comic strip?

My Clinique Chubby Stick in Super Strawberry continues to delight.

White wine in a box has not let me down even once.

The TV show "Person of Interest" is still going strong in the not-letting-the-team-down department.

My dusty, overcrowded but warm and cozy home is still a treasure.

(PS, annamariatuckett, I love my Babyliss blow dryer! I can't wait until we upgrade our wiring so I can unleash its full fury. But even on "medium" it is epically fantastic.)

Beleef de Lente! I would have never discovered this wonderful site http://www.beleefdelente.nl without you, dear Waffle, and it was THE BEST THING EVER on the interweb, especially the oehoe family. I wish it was March already, when they will be back with their wondrous web cams trained on bird nests.
The mating season of the eagle owls should be in full swing now, and surely the oehoe web cam will be featured again in 2014?!
I am forever indebted to you for pointing out the link. Not to mention your own fabulous blog which I adore.
Was it you mentioning the ugly Belgian houses site? That was another highlight of 2013...

Morelle - So true. That tip came initially from Frau Antje! She is responsible for some of my very greatest moments of happiness of the past four years. Can't wait to get the ohoes back.

You have not let me down, not once.

Anon - goodness, what a lovely thing to say. I am really touched. Thank you!

I love lint removal too! We used tumble dryers whenever we could in New Zealand hostels and they always had a good sheet of lint needing to be removed.

Things which have not let me down: a nice hot bath, gin, baking, good friends, blogs such as this, and, apparently, my brain, given the still-a-shock-to-me PhD viva passing.